The Mütter Museum of The College of Physicians of Philadelphia was founded in 1858, but opened shortly after the death of Thomas Dent Mütter (Mütter died in 1859) in 1863. The museum began as a donation from Mütter himself, who gave 1,700 specimens and $30,000 in cash to the museum.

Mütter’s reason for donating his specimens to the museum was to reform medical education and made the college promise to hire curators, maintain and expand the collection.

Since then, the museum had grown its collection to over 25,000 objects, fulfilling the promise the college made to Mütter when he donated his specimens.

The museum helps the public understand the mysteries and beauty of the human body and to appreciate the history of diagnosis and treatment of disease.

Over the years, the museum has built a reputation for housing medical oddities and exposing younger generations to the best of the medical world.

The museum also has an educational program that for middle school and high school students of diverse socio-economic background to expose them to a variety of careers in healthcare and also to introduce them to the history and culture of medicine.

Here are 10 creepy exhibits on display at the Mütter Museum. 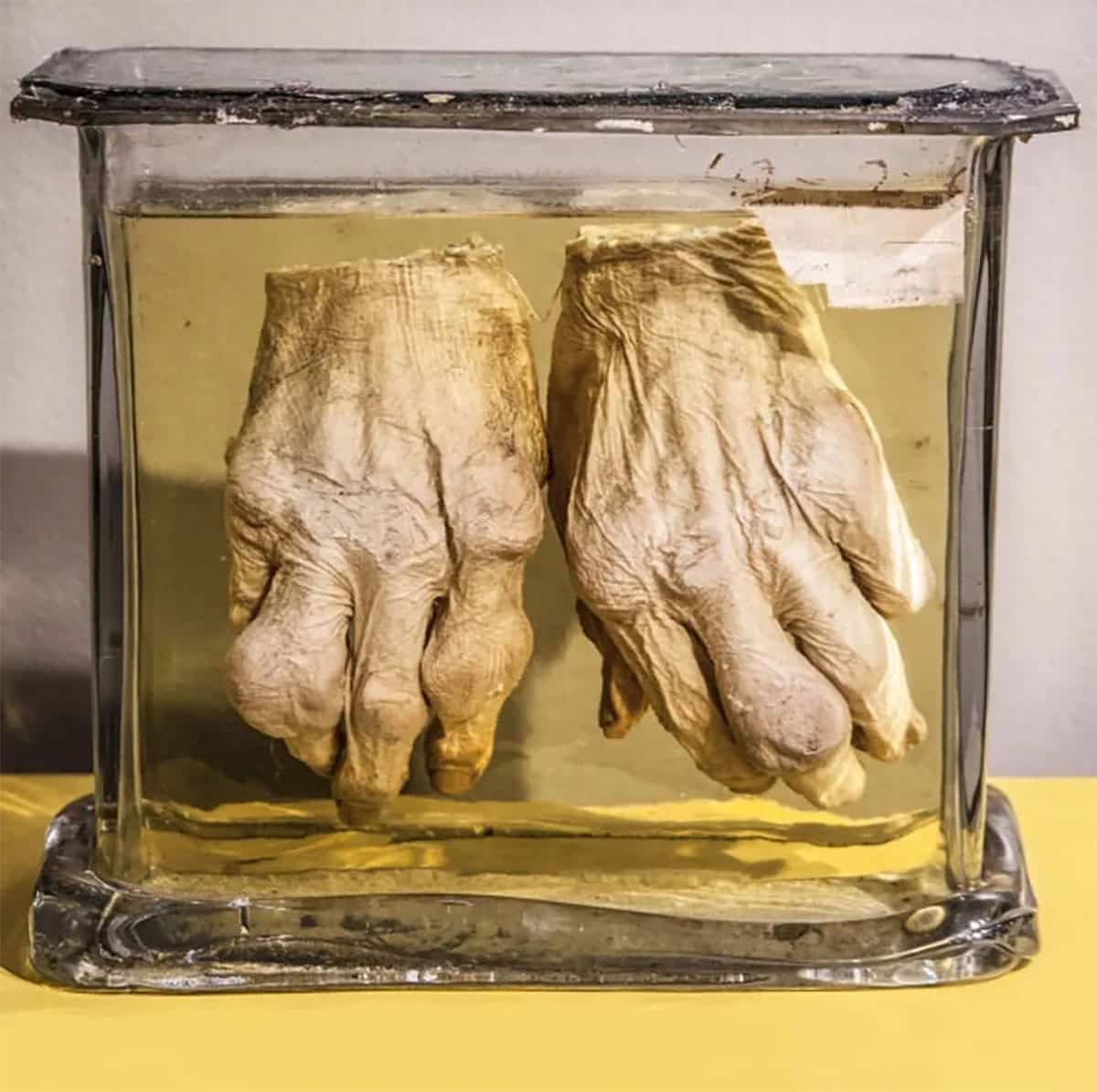 Among the items on display at Mutter Museum are these human hands, which have been preserved from the 19th-century to show the physical swelling of gout. The visibly swollen masses around the knuckles are called Tophi, which is usually very painful.

Gout, which is also commonly called Gout Arthritis, can affect any joint in the body, but it is familiar to the great toe, hands, and ankles. This pain is caused by the deposit of urate crystals around the joints, which causes inflammation, redness, and pain.

Urate crystal deposits are a result of the high level of uric acid in the blood.

Gout also called King Disease because it is common among wealthy people at an early age, but studies have shown that it can affect anybody, although the risk factor varies. 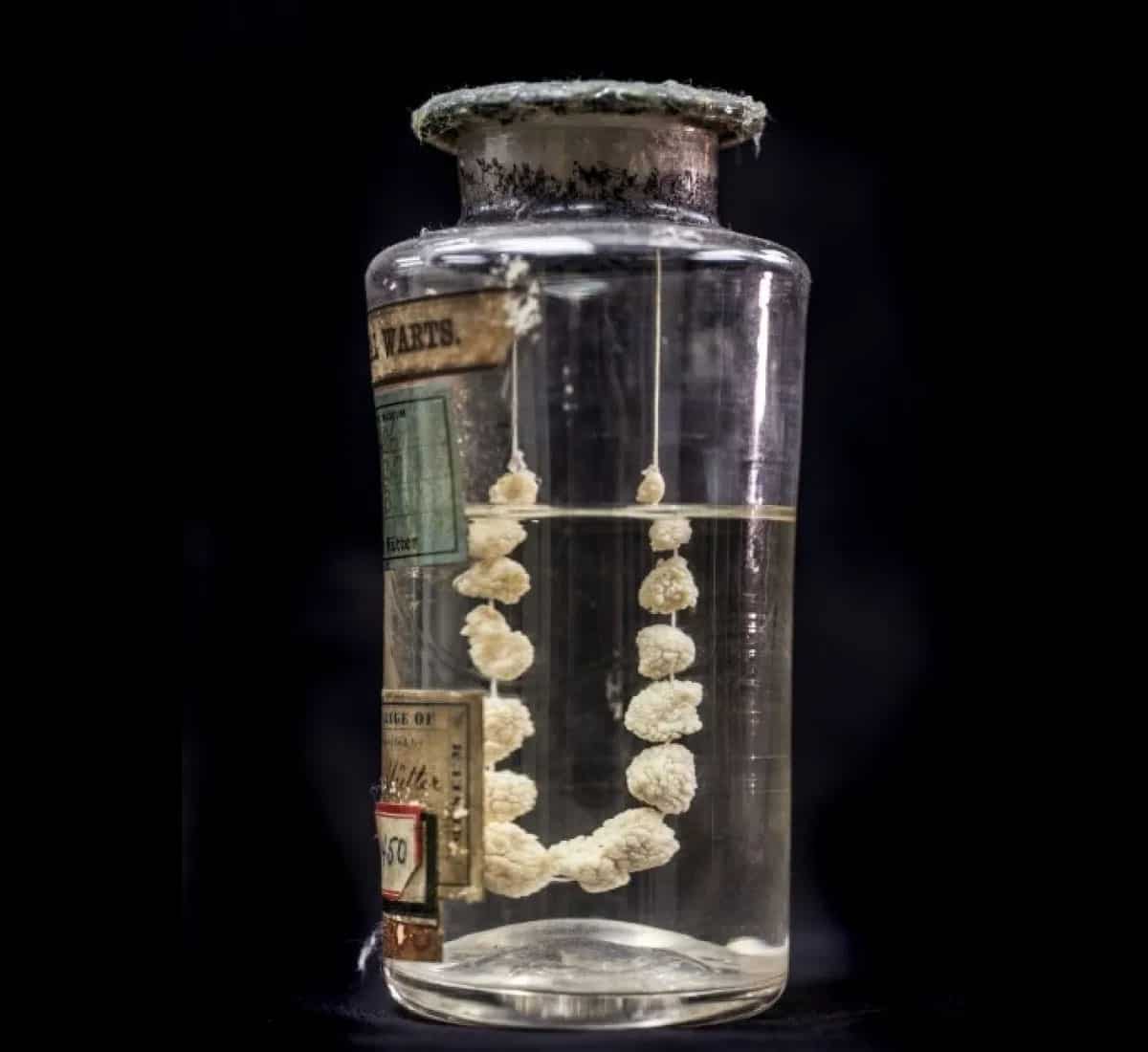 Suspended in a glass jar in the museum is a collection of genital warts, with a 360̊ view of the wart for easy physical examination.

Genital warts are one of the various examples of s*xually transmitted diseases and are, of course, transmitted through s*xual intercourse. The Human Papillomavirus (HPV) is responsible for genital wart.

When it has reached its advanced stage, genital warts can form a thick growth on the genitals (an example of the growth is seen above), which can sometimes be painful. The growth can occur between 1 and 8 months after infection and can occasionally be unpleasant and also bleed.

Warts can cause itching, redness, or discomfort, especially if it occurs around the anus. Genital warts cannot be cured but can be surgically removed or dissolved to bring relief to the genitals.

Even after the removal, genital warts can regrow. 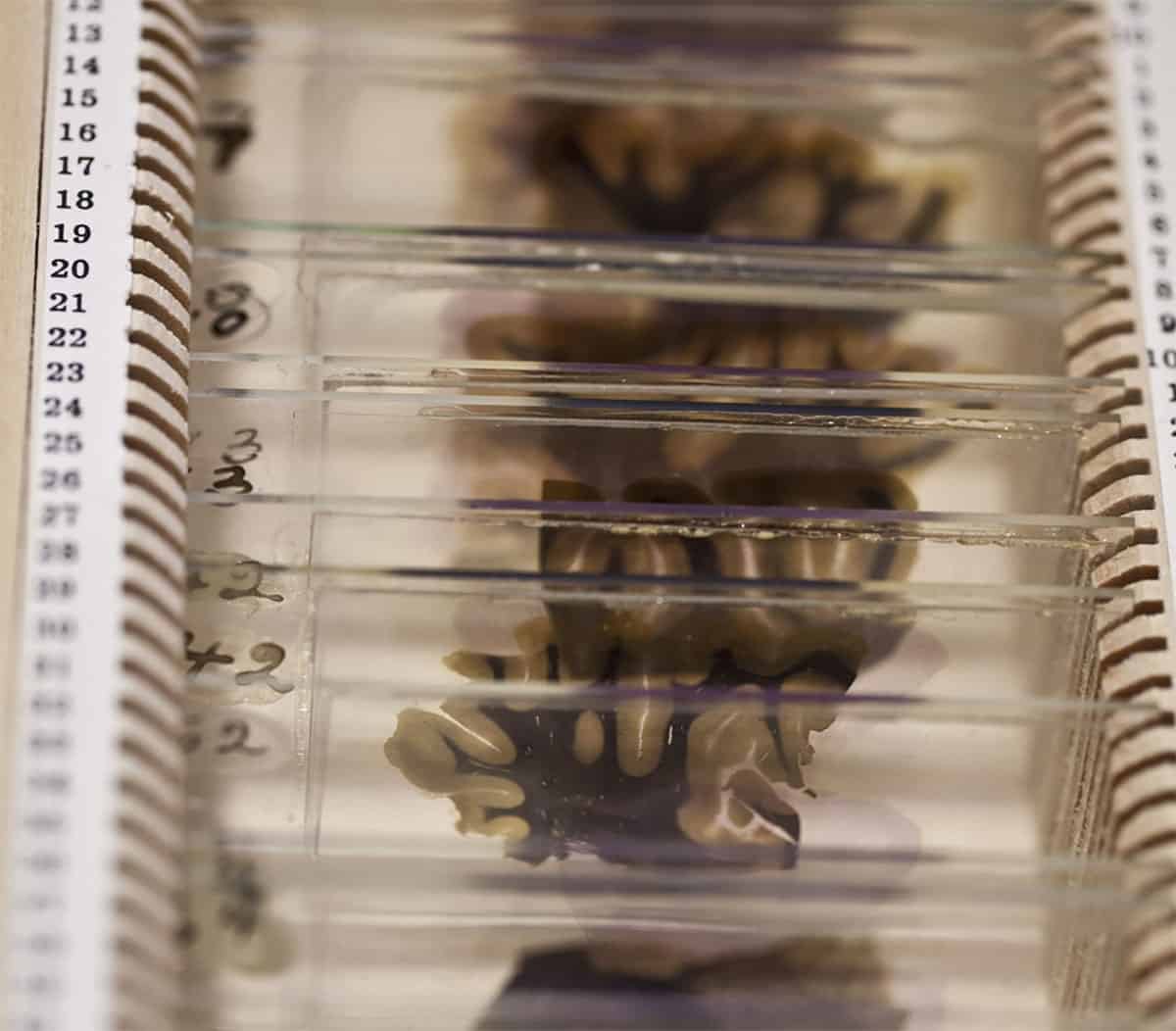 Few scientists can lay claim to being more famous than Albert Einstein, particularly in the 19th and 20th. Einstein was a widely known and acknowledged genius; it is no surprise that his brain was not cremated with him.

Sitting in an enclosed glass vase in The Mütter Museum, you will find strains of Einstein’s brain, 20 microns thick and stained with cresyl violet on multiple slides on full display to the public.

Einstein’s brain can only be seen in two places in the world, and the Mütter Museum is one of them, although not the full brain.

Einstein’s brain journey didn’t end when he died in 1955; it was initially ‘stolen’ by the pathologist that autopsied him, Thomas Harvey, who wanted to examine the brain and account for Einstein’s extraordinary thinking ability.

Harvey later got permission from Einstein’s family to keep the brain and use only for scientific research and publication in high standard journals.

Albert Einstein’s genius drew attention to his brain and irregularities between his brain, and that of an average human being has been used to support various ideas about correlations in neuroanatomy with general/mathematical intelligence. 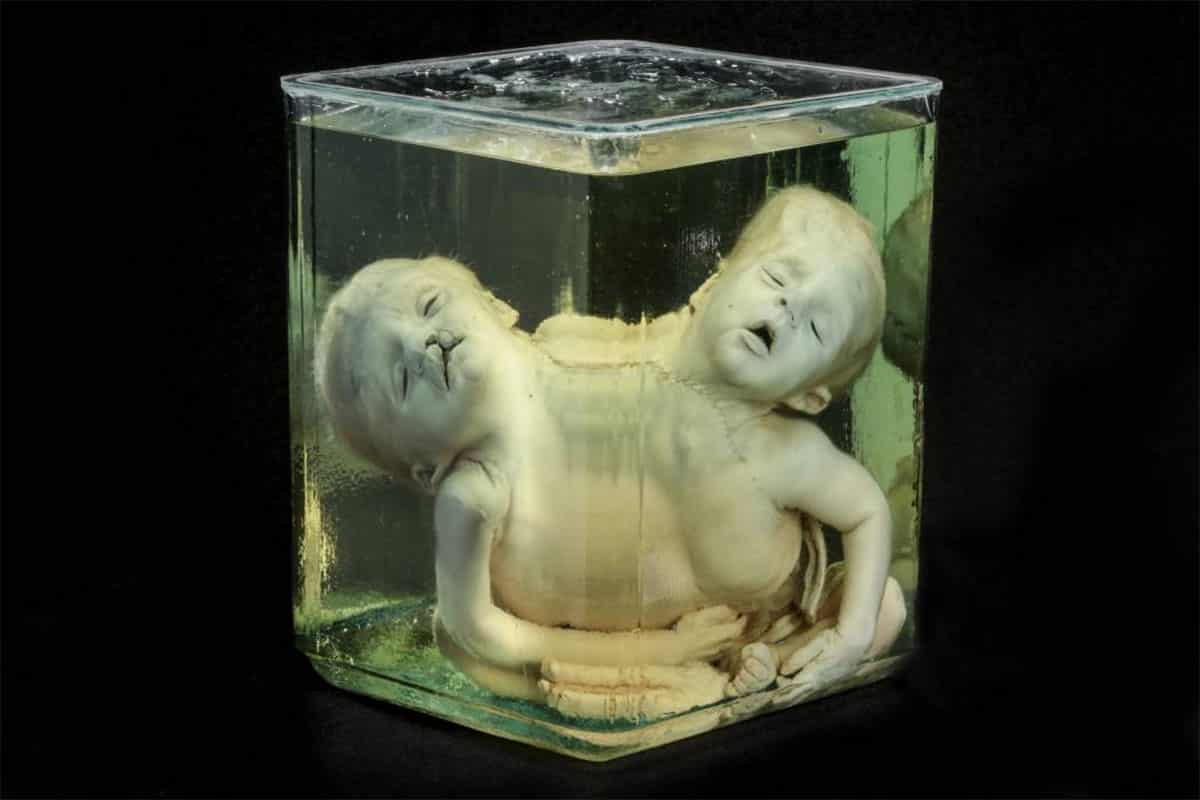 Conjoined twins are very rare in nature; occurring in 1 in 200,000 live birth and have a mortality rate of 60% in all live birth, 35% of the live birth die within 48 hours after delivery.

It is no surprise that the conjoined twins above were stillborn, like many others. They were found in a medical school closet by the staff, and the school donated it to Mütter Museum.

There are two causes of conjoined twins; the first is that a single fertilized egg does not fully split during the process of forming identical twins.

The second is that a fusion of two fertilized eggs occurs earlier in development. Although conjoined twinning has not been linked to any environmental or genetic cause, they occur so rarely it has not been possible to draw firm conclusions. 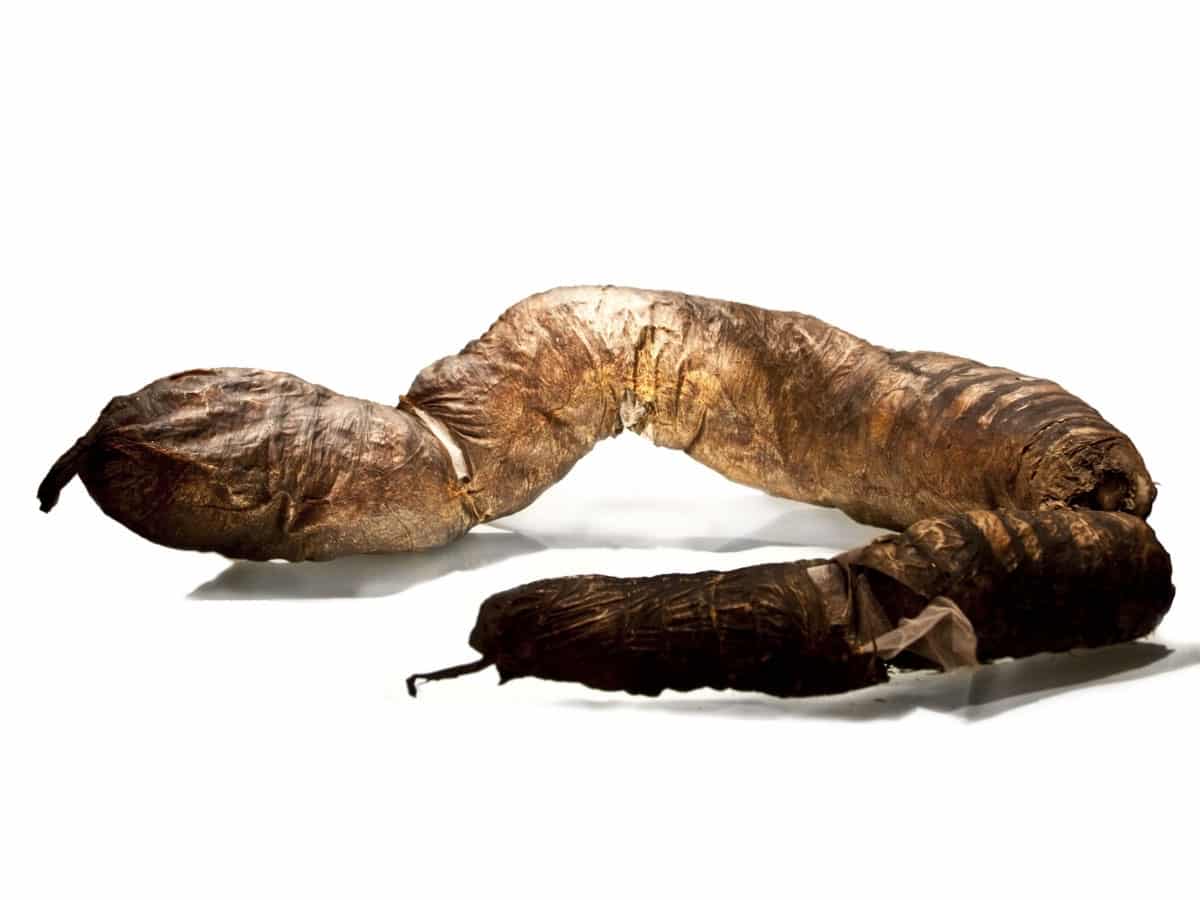 The subject identified only as J.W was 29 years old when he died but has always complained of constipation and irregular bowel movement.

At dead, the colon contained almost 40 pounds (18kg) of human feces and has ballooned so much that the subject had a protruding belly.

There was no official diagnosis for his condition as at then, but it was later discovered to be Congenital Aganglionic Megacolon or Hirschsprung’s disease. A condition in which the nerve part of the colon fails to develop, making it difficult for waste to move to the rectum.

The subject was healthy for most of his infanthood except for irregular bowel movement and a large abdomen, and by the age of 16, he would go one month without any bowel movement.

He regularly complained of constipation, and at age 20, he was exhibited as the ‘balloon man’ or ‘windbag’ at dime museum. He would later die of the condition and was found dead in the bathroom, attempting bowel movement. 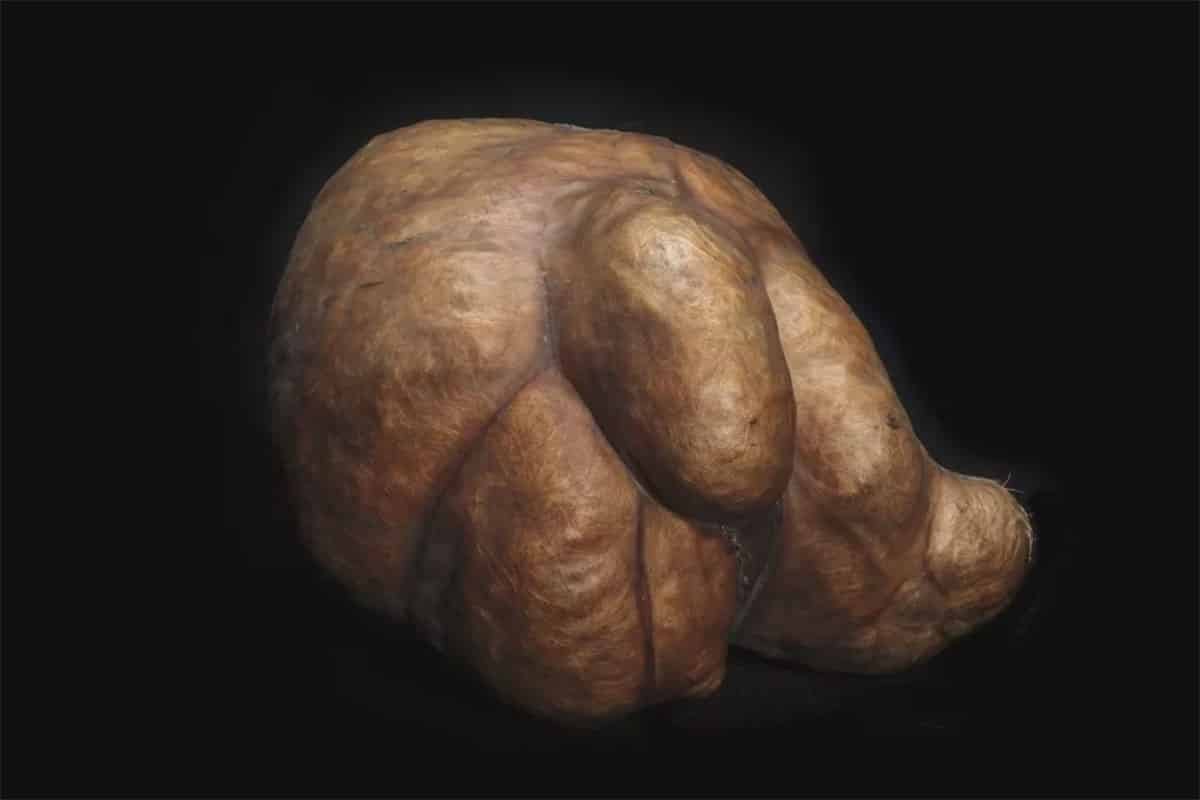 This ovarian cyst was donated by W. L Atlee in 1865 after been surgically removed from Miss S. W in the same year.  The ovarian cyst weighed 74 pounds (34kg) at removal and posed extreme difficulties to the subject.

The cyst caused extreme pelvic pain and acute problems relating to the displacement of internal organs. Before removal, the surgeon W. L Atlee described the subject’s condition and the tumor ‘…such an immense mass it was, and so small and emaciated was the woman, that [it was the] cutting away the patient from the tumor.’

Although the post-operation condition of the subject cannot be determined, the surgeon had a low mortality rate, so there is a high chance that the subject survived the surgery.

An ovarian cyst is a fluid-filled sac within the ovary, which can cause mild abdominal pain, uterine bleeding, nausea and vomiting, etc. the size of the cyst can sometimes cause extreme pain. In such cases, it needs to be surgically removed. 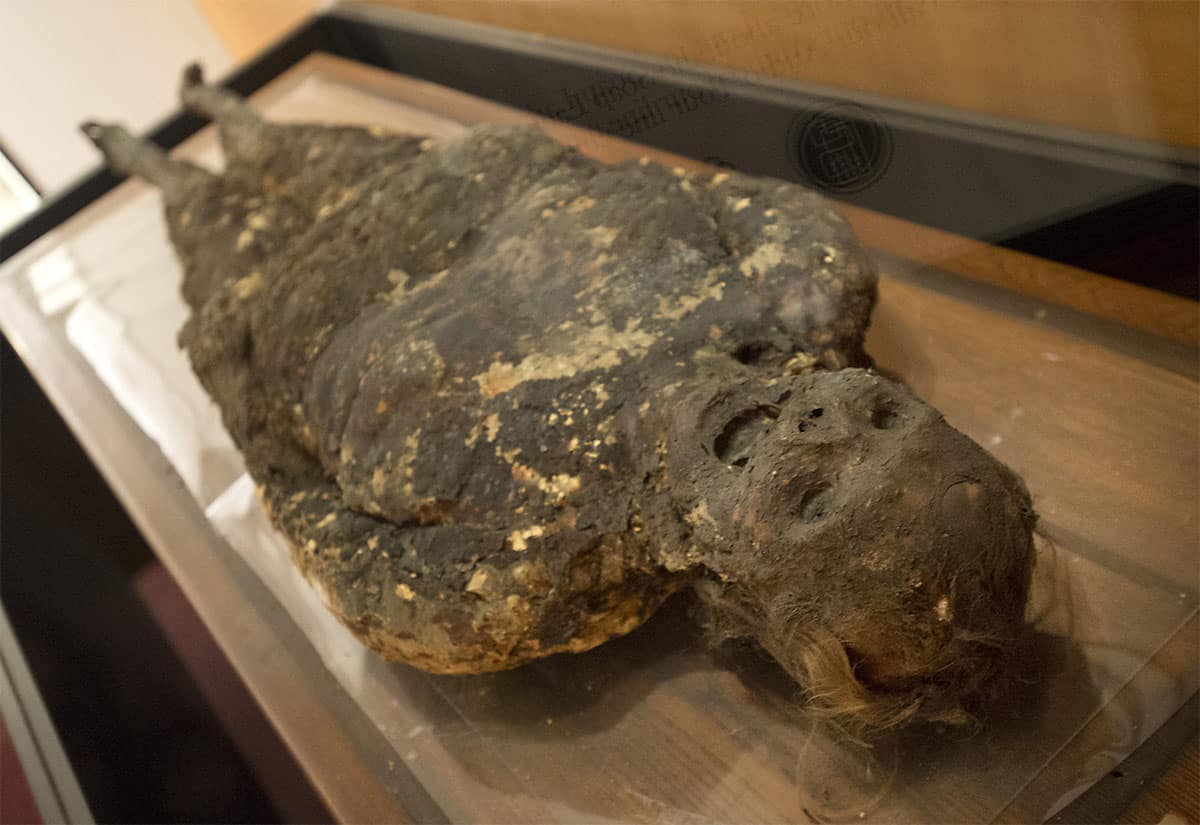 Dr. Leidy delivered ‘the soap lady’ to the Mütter Museum in 1875 after the body was exhumed in a cemetery in Philadelphia. What made the soap lady unique is that her body was encased by a fatty substance called adipocere, which was very uncommon.

The soap lady’s body was wholly saponified i.e.; her body had undergone chemical changes that transformed her body fat into a by-product of decomposition called adipocere.

Adipocere is an organic material with the consistency of semi-hard cheese and a soapy, waxy texture. It has also been called grave wax or corpse wax.

Adipocere is formed in alkaline, a warm and airless environment in which the soap lady was found. Initially, Dr. Leidy reported that she died of yellow fever in 1792, and because of her lack of teeth, she died in her middle or old age.

Reports later in the 20th-century disproved Dr. Leidy’s initial reports, and the soap lady’s probably died in early 1820 before the age of 40. 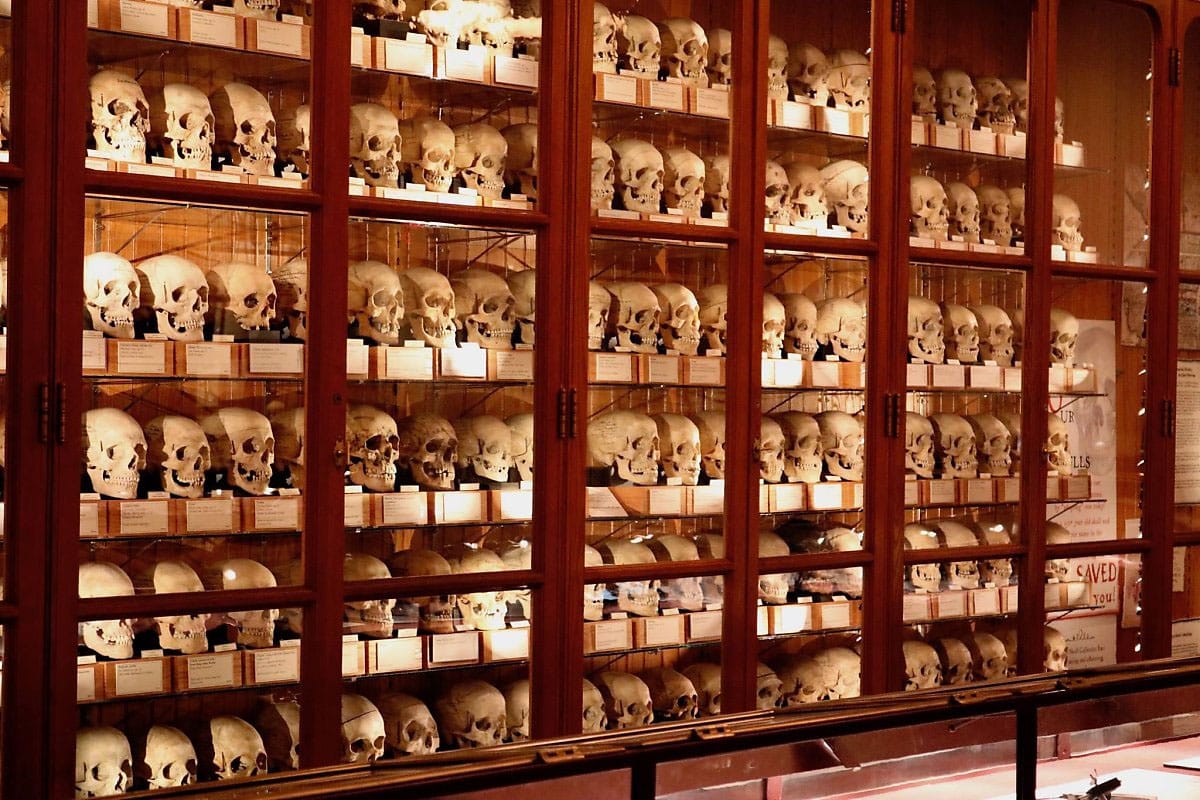 It is impossible to miss a visible wall of skulls that greets the visitors at Mütter Museum. Viennese anatomist Joseph Hyrtl collected the skulls (139 of them), and Mütter Museum acquired it in 1874. Joseph Hyrtl acquired the skulls to counter the claim of phrenologist that cranial features were evidence of intelligence, personality, and also that racial differences caused anatomical differences.

In simple words, the theory that skull size and shape reflected the character, personality, and intelligence of a man was what Hyrtl tried to disprove.

The skulls in Hyrtl’s collection came primarily from Central and Eastern Europe; For the most part, they were skulls of suicides and executed criminals that were taken from their resting places by local men who were paid for their services by Hyrtl or his associates in the area.

Towards the end of Hyrtl’s medical career, he began to sell off his various collections to museums around the world. His collection of 139 human skulls was purchased in 1874 by the Mütter Museum, where they remain on display to this day.

Most of the skulls on display at the museum carries the donor’s age, place of origin, and cause of death. Hyrtl made sure to sort the skulls properly for his studies. 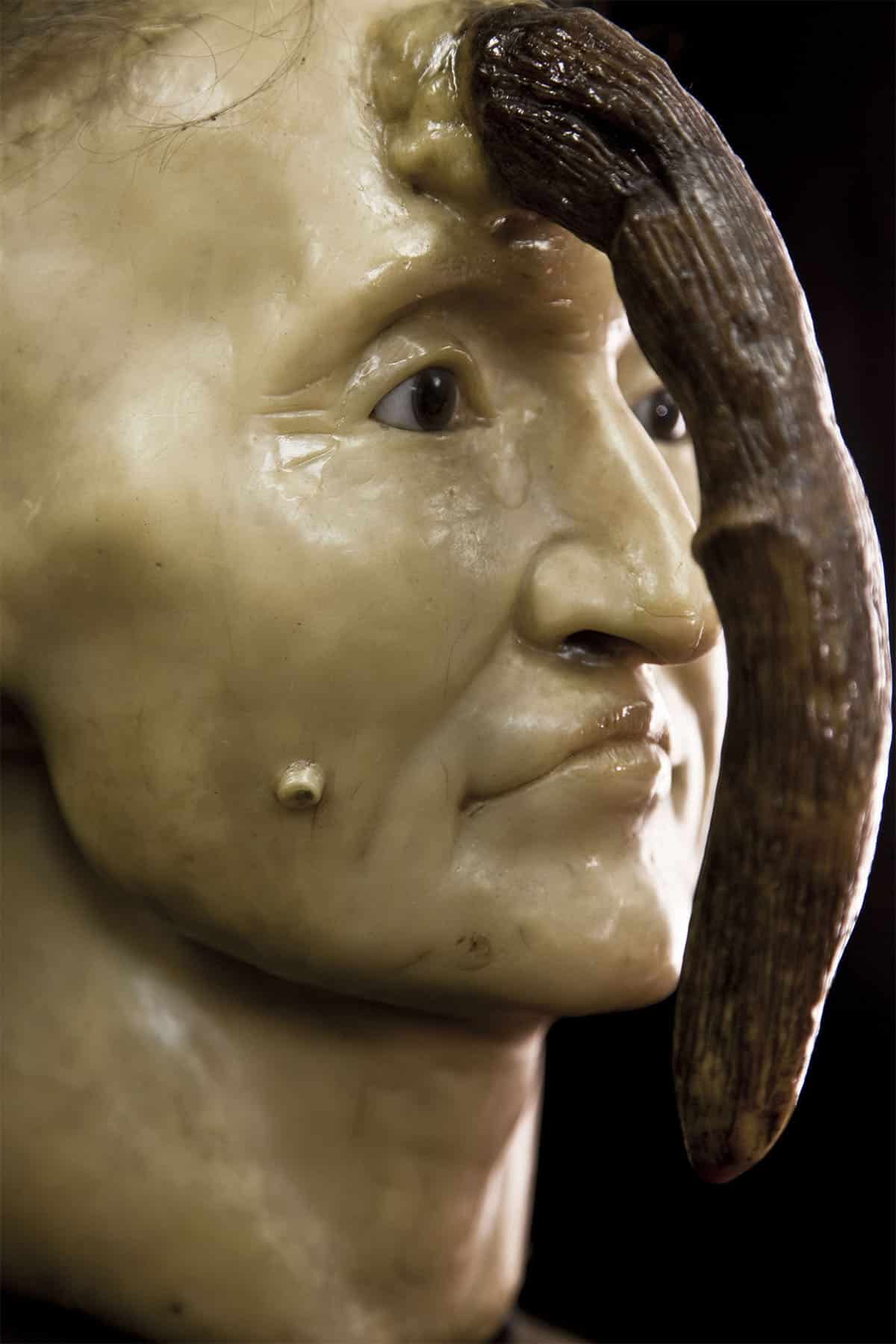 Mounted on display at the Mütter Museum is a wax model of a 25-centimeter long horn protruding from the top of the model’s forehead and hanging down in front of the face.

This is the replica of the horn that grew on a 76-year-old Parisian widow, Madame Dimanche, in the 19th-century. The horn grew for almost six years on her forehead before a French surgeon successfully removed it, and the horn was donated to the Mütter Museum.

Human horns (cornu cutaneum) are not uncommon, and there have been several cases, even in recent times. While the major causes of this condition are still unknown, there is a general belief that exposure to radiation can cause it, as supported by frequent cases of growth only in places exposed to sunlight.

Most human horn cases are not dangerous and can be removed surgically. 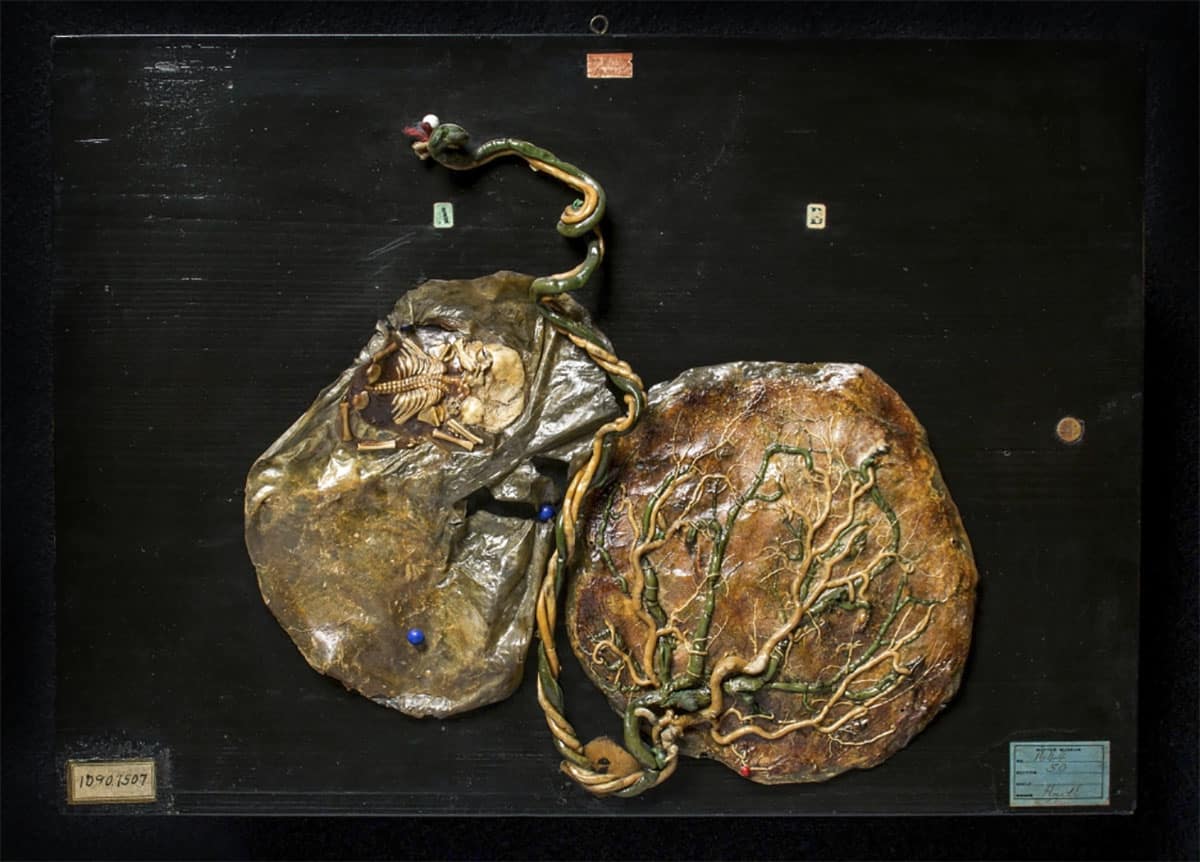 Another one of Joseph Hyrtl collections, the anatomist, may be known for his massive skull collection. Still, he also worked on placentas to study fetal development and donated this specimen to the Mütter Museum.

This double placenta specimen nourished a pair of twins in the womb, but the mother suffered from a condition called hydramnios, a defect in which the amniotic fluid is either too much or too little.

Any critical change in the amniotic fluid level can prove fatal to the fetus, as seen in this specimen above. One of the twins crowded the other, which stopped growing at about four months of gestation due to hydramnios.

The other twins developed fully and were delivered while the hidden twins were expelled at birth with the placenta.

Hydramnios occurs in about 1 – 4% of all pregnancies and are more common in twins and multiple birth pregnancies.