Descendants of a small leaf-shaped fish, sharks, began to increase their size during the Paleogene period starting from the end of Cretaceous or around the same time Dinosaurs went extinct to the beginning of Neogene, spanning over 40 million years.

Somewhere along with that evolutionary progression, the ancestor to megalodon first appeared. Contrary to popular belief, megalodon is not related to the great white shark.

They are descendants of different ancestors, which may have been in direct competition for prey. Ultimately megalodon succumbed to natural selection, but its tales live on.

In the Sant Ocean Hall of the Smithsonian National Museum of Natural History in Washington D.C., you will find yourself face to face with the ancient giant of seas.

At 52-foot large, the life-size replica of an extinct shark has its mouth open so that you can see just how large the teeth are.

As one of the largest predators to have ever lived in the ocean, megalodon would have been a fantastical sea-dweller. 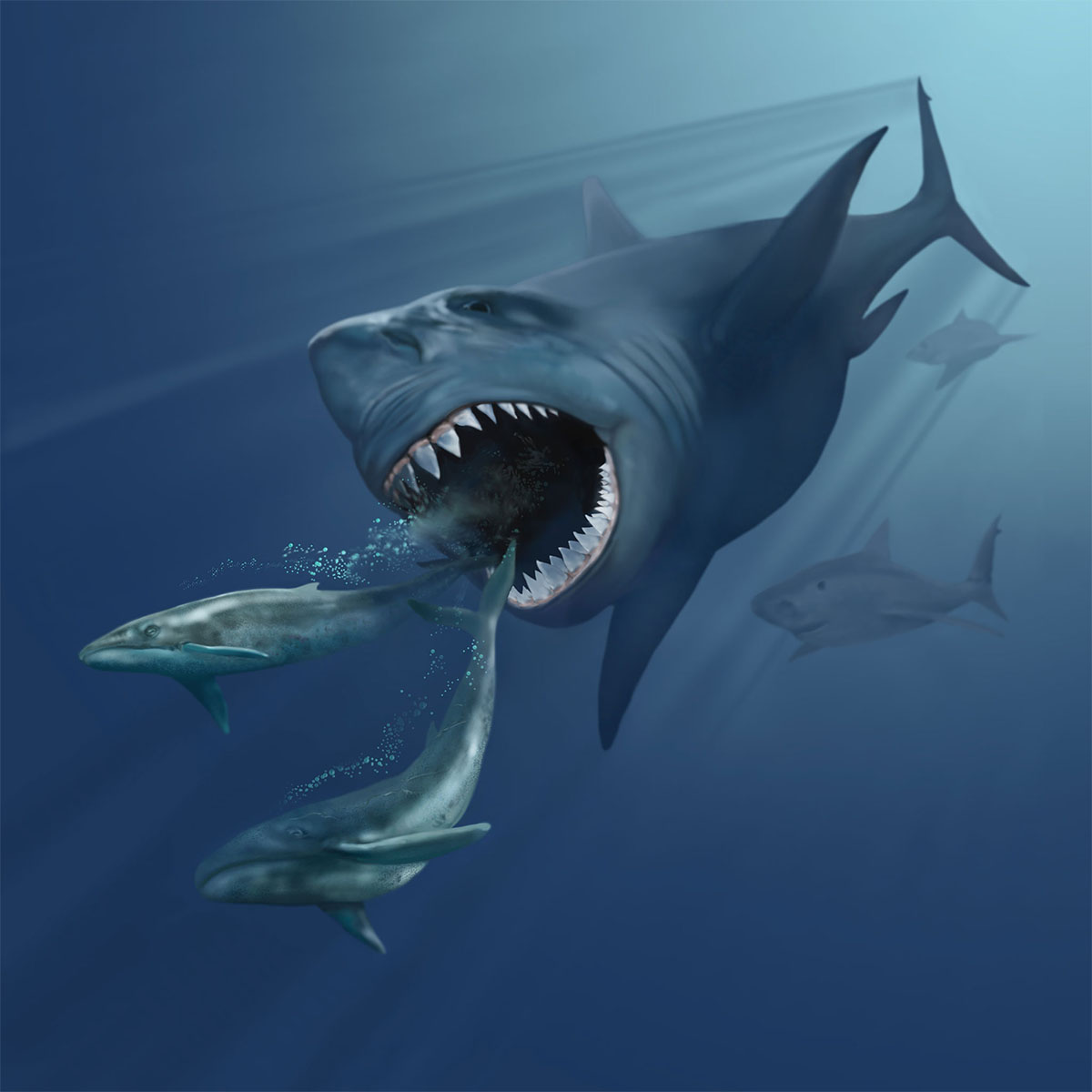 The oldest confirmed ancestor of megalodon is a 55-million-year-old shark known as Otodus Obliquus, which could grow to reach 33-foot long.

The lineage could be stretched further back to a 105-million-year-old shark called Cretalamna appendiculate, a smaller predator measuring around 9-foot long.

Assuming that was indeed the case, the evolutionary history of megalodon would have lasted more than 100 million years.

Newer discoveries of fossils suggest that megalodon lived alongside the ancestor of great white sharks. Some scientists believe the two sharks were both apex predators in direct competition with each other.

No one knows precisely how the megalodon looked like. Reconstructions from fossils are about as accurate as they can be.

Most existing replicas show quite some resemblance between megalodon and great white shark; if anything, the former was like an oversized version of the latter.

Now scientists know the comparison is incorrect due to different lineage. Megalodon most likely had a flatter jaw, shorter nose, longer pectoral-fins, and of course, larger size and weight. 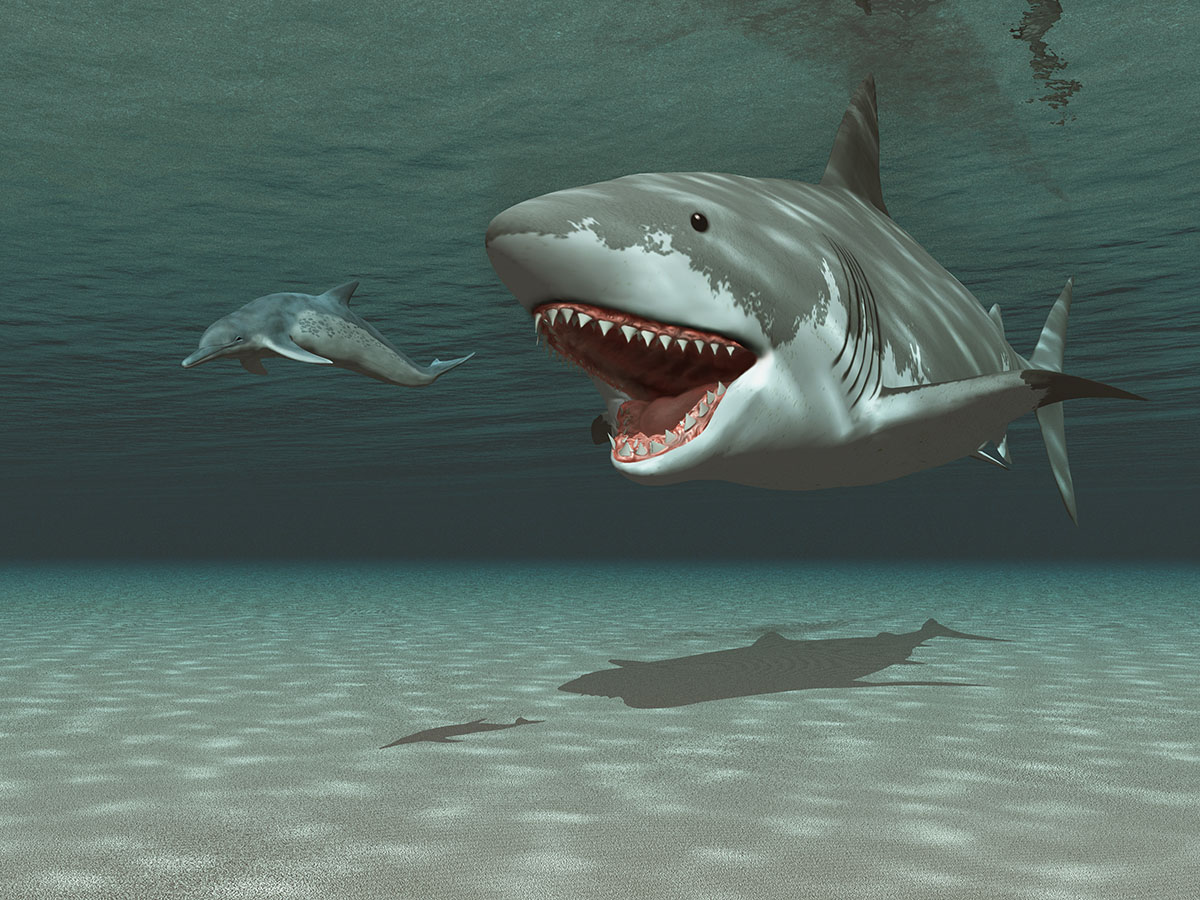 One of the earliest megalodon fossils to have been unearthed dates back to 20 million years ago. It had been previously known as Carcharodon before it became megalodon.

For many more million years, until the enormous shark went extinct around 3.6 million years ago, it dominated the oceans across the globe.

Not only was megalodon the giant shark, but also the largest fish to have ever existed, even during the days of the dinosaurs.

Bear in mind that dinosaurs and fish are different species. Megalodon could reach 60-foot in length or three times longer than the giant great white shark.

Without a complete skeleton of the megalodon, the figures are determined based on the size of its fossilized teeth. A single tooth could reach 7-inch long, and megalodon had 276 of them.

Logically it would need a massive jaw attached to the vast body to keep everything contoured efficiently for fast swimming. The word “megalodon” refers to “large tooth.”

It also makes sense that the teeth remain in existence despite the absence of a complete skeleton because they are the most challenging parts of the shark’s body. Their frames are made of softer cartilage like human ears.

Considering the size and strong teeth as weapons, megalodon most likely preyed on large fish, such as whales and perhaps other sharks.

Megalodon had to eat a lot to maintain its size, so it probably ate some smaller fish such as dolphins in addition to larger prey.

Many of the fossilized whale bones discovered so far show evidence of megalodon bite marks or teeth marks etched on the surface.

Some bones even still have tips of megalodon teeth planted into them. The recommendations likely broke off during a feeding frenzy millions of years ago.

To take on prey as large as a whale, a megalodon needed to open its mouth wide.

Based on the size and number of teeth, it is estimated that the jaw could span anywhere nine by 11 feet wide, easily large enough opening for two adult people to fit inside.

And with so many large individual teeth inside the jaw, reconstruction of the mouth of a megalodon has shown it had a bite force of between 108,514 and 182,201N – about five times more potent than a T-rex. 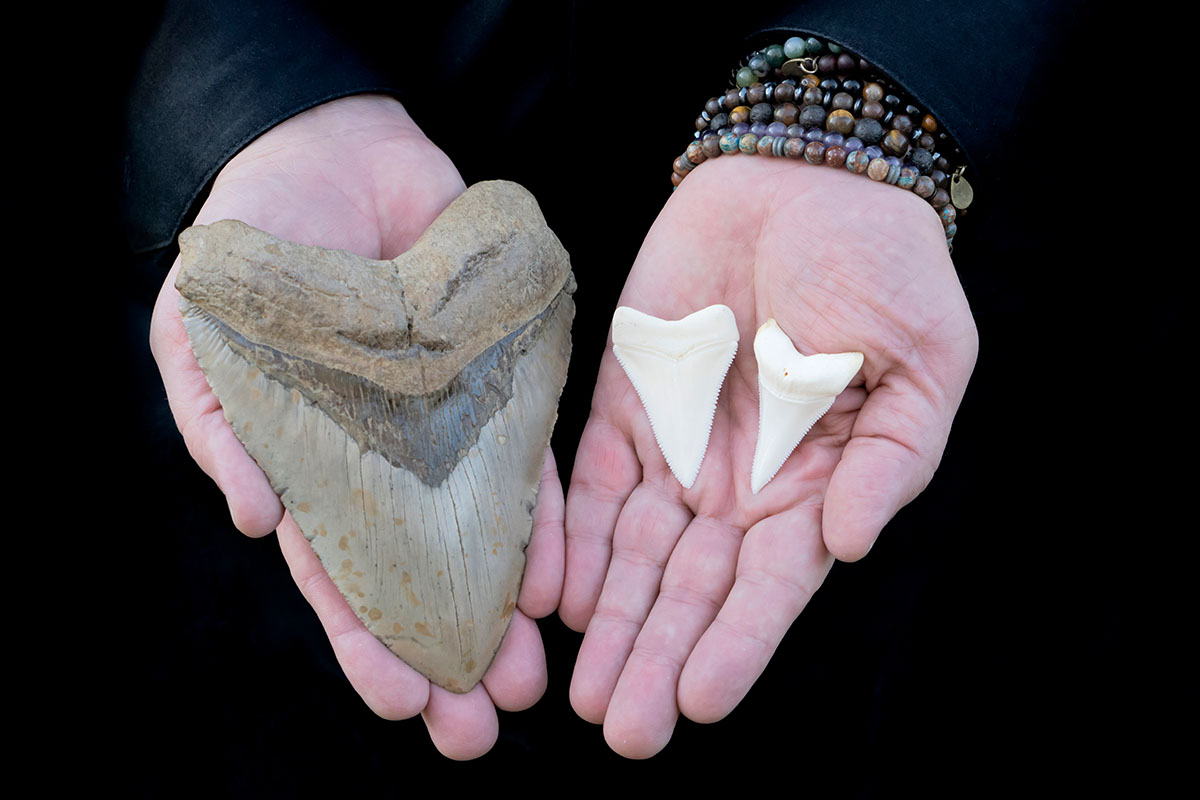 Megalodon teeth have been discovered on every continent except Antarctica, suggesting that the colossal shark roamed across a wide range of waters all across the world.

In the United States, the teeth have been found at the bottom of saltwater rivers in Florida, North Carolina, and South Carolina.

The fossils are pretty common in parts of Australia as well as along the off coast of Morocco.

Although relatively rare in the U.K., some specimens have been found near Walton-on-the-Naze, a small town in Essex, although the fossils tend to be of poor quality from this region. 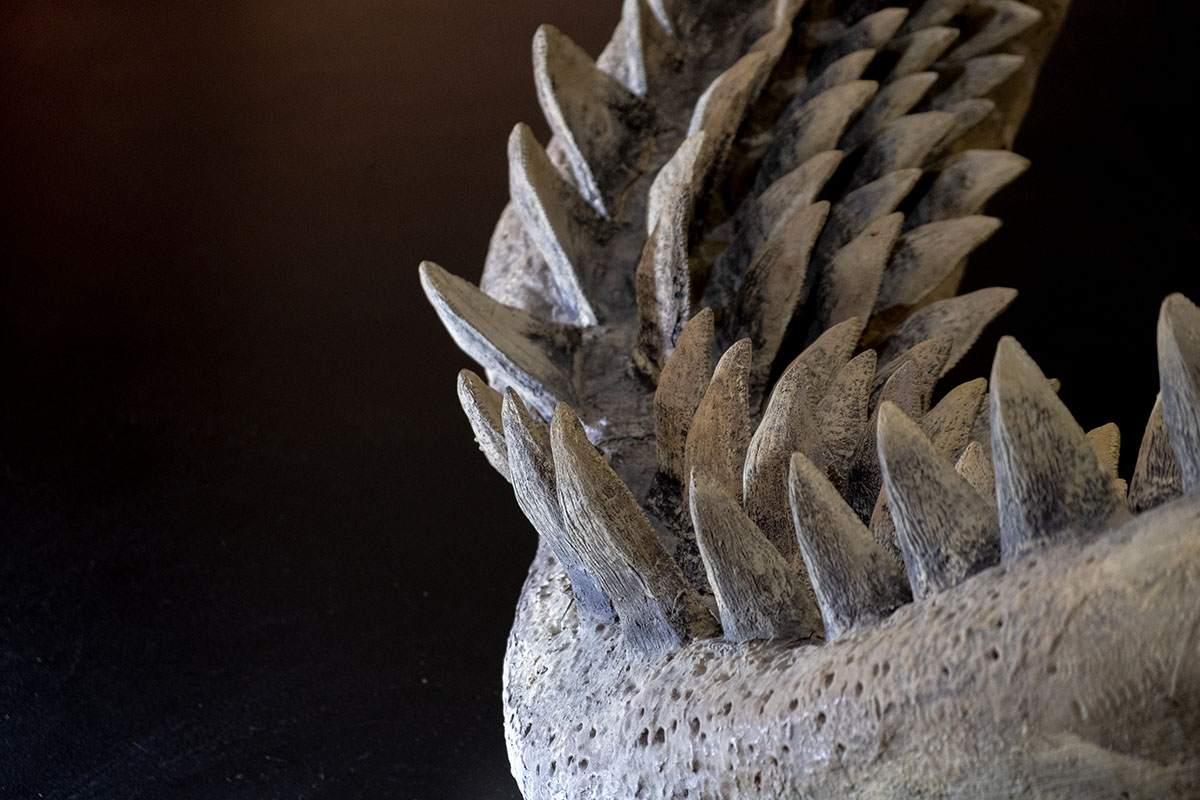 Sharks constantly grow new teeth throughout their entire life, and so did megalodon.

On average, sharks lose a pair of teeth every two weeks or so. Every bite onto prey could cost megalodon a few teeth or more, but soon some new teeth would replace the missing ones.

A robust and struggling game increased the likelihood of more than a few megalodon teeth falling to the bottom of the ocean, which is why the fossilized specimens are unusually common.

However, a megalodon fossil found in Peru still has the braincase and a small section of vertebrae.

However, precisely when the last megalodon died is unknown. It has been established that megalodon went extinct around 2.6 million years ago by the end of the Pliocene period.

During that period, the world entered a global cooling that triggered the extinction of up to a third of marine animals, including many sea birds and turtles.

Animals at the bottom of the food chain could not survive, starting a knock-on effect to larger predators.

A gradual drop in temperature also caused the megalodon, adapted and dependent on tropical waters, to lose much of its habitat. 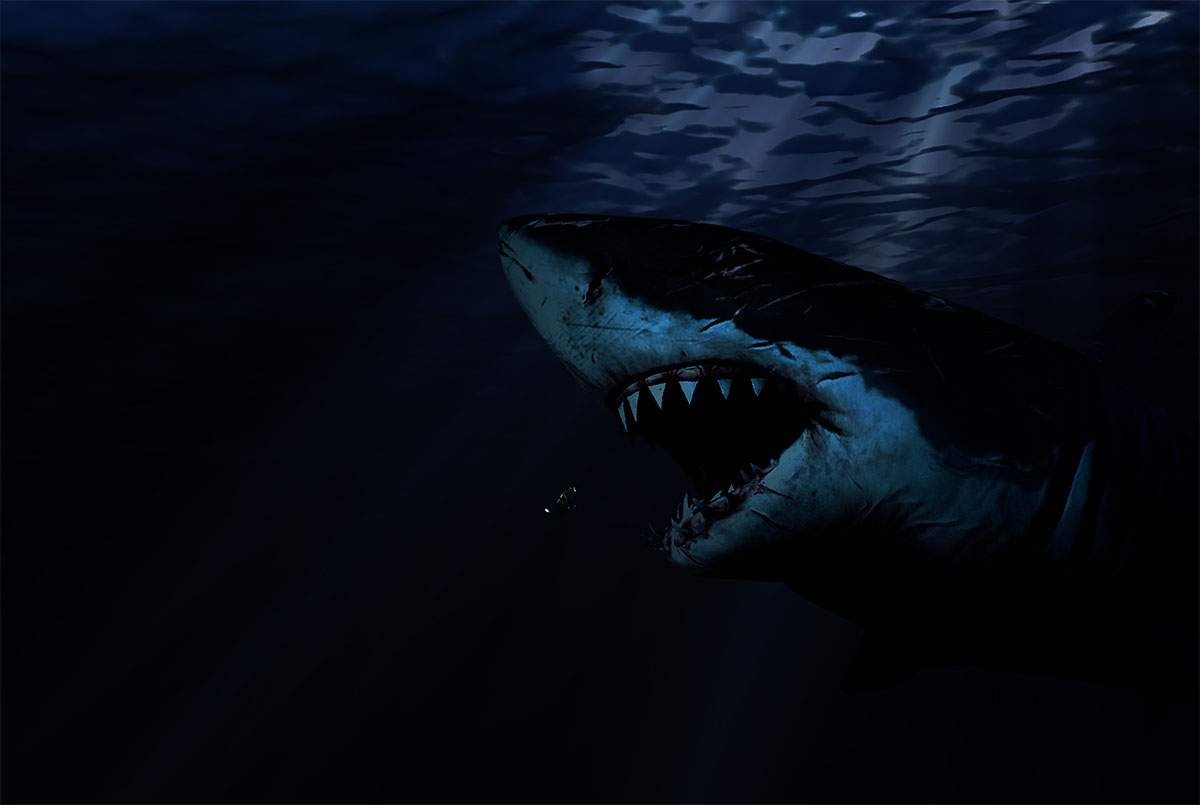 Despite what the Discovery Channel said in the past, megalodon couldn’t possibly exist in today’s marine ecosystem. An animal as large as a megalodon cannot just stay hidden in a world.

Marine biologists conducting experiments anywhere would have known about its existence.

Some may argue megalodon can be in the ocean’s depth, but this too is incorrect because they will not survive the low temperature, a condition that sent them to extinction to begin with.

Anybody who says megalodon still exists most likely tells a story from a fictional book.