by Factionary 5 months ago1 month ago
03.2Kviews

When you think of a playground, chances are you picture some children having fun riding on a merry-go-round, climbing the monkey bars, or getting excellent laughs on a swing.

Those are pretty familiar sights in a public park that you never really associate the term “playground” with anything other than a beautiful, joyful time.

If you want the kids to have a more adventurous experience, you will probably take them to a campground in an RV park or on a fishing trip in a local lake and perhaps build a tent in the backyard.

There is always a ghost house in the county fair for a little bit of horror during Halloween. The point is that there is a specific place for a different kind of excitement.

Unfortunately for many kids out there, having “varied options” for outdoor entertainment is a luxury.

In many places, the only playgrounds nearby are not adequately maintained and or have been entirely abandoned for quite a while, transforming a fun place to play into a creepy piece of land filled with malfunctioning, inappropriate, and sometimes downright dangerous playground equipment.

Here are some of the creepiest playgrounds captured in photographs.

Let us start with the creepiest of them all; one version of merry-go-round looks eerily the same as a scene you see in the 2009 horror film The Human Centipede, if not worse.

The film’s basic idea is to surgically join multiple people together by creating a connection from mouth-to-anus.

Even horror-movie lovers thought the premise was just too scientifically incorrect and gross more than it was scary. A playground pictured above is more or less the same thing, with the addition of a dog and a giant lizard. 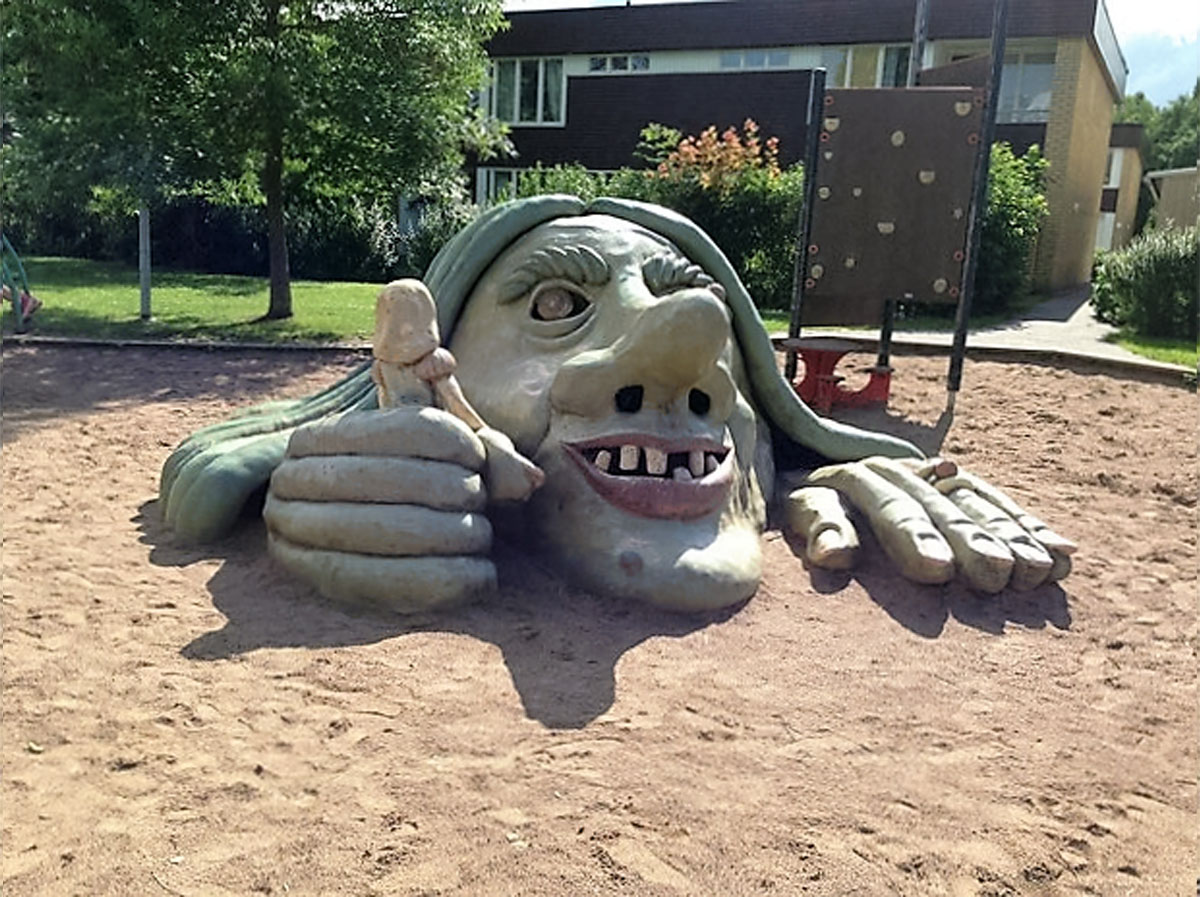 Children love sandpit in the middle of a playground. They get to run around and build a castle out of sand grains and then destroy it just for fun.

Dirt inevitably brings to the inside of their shoes, but it is alright as long as they have a great time.

However, in a Swedish sandpit, a strange witch figure that seems to have been buried neck high in the center of the pit is overlooking the area. It doesn’t help that the witch appears to be clutching an innocent girl in her fist.

South Korea has its K-pop culture, Samsung, and LG. Together those brands propel the country’s reputation as one of the world’s largest hubs for style and technology.

However, in some parts of the country, things are not always as glam as they may seem. A prime example is a playground captured in the photograph above.

It is not precisely clear where in South Korea that this twisted slide architecture is located, but wherever it is, children should not be around.

A community of Melbourne-based artists created the Snuff Puppets Theatre Company in 1992.

They hold regular events on stages and in the streets and parks all across the city. Undoubtedly, children are among the audience in many shows.

One of the most popular attractions is the Human Body Parts, in which large-scale puppet body parts have minds of their own. They might be fascinating for horror-movie goers, but not much for kids.

In 1970, when the Land of Oz in North Carolina first opened, it was a 16-acre trendy theme park. Interest began to decline not long after that, and as a result, the park became almost wholly abandoned.

A devastating fire burned and destroyed parts of the park in 1975, leading to an official closure five years later. Much of it fell into disrepair, and props were vandalized.

The park has been re-opened since 1991, but some playground equipment still looks pretty creepy for adults, let alone kids.

Once it was the largest amusement park in Wichita, Joyland is now filled with abandoned creepy playground equipment more appropriate for Halloween night than a summer vacation.

The amusement park operated for 55 years until it was permanently closed in 2006. The demolition process started many years later, and the plan was to level the entire park by the end of 2015.

Until today some of the playgrounds remain standing. In particular, one looks a lot like a ghost house from a set of a zombie movie.

Also known as the Blobbyland, the Crinkley Bottom Theme Park in England was short-lived. It opened for the first time in 1994 and was permanently closed by 1997.

The main attraction was a Blobby-themed house known as the Dunblobbin, based on a popular television show character in the 90s.

It was eventually demolished in 2014. Among the few parts that remained standing is a house that looks like a terrible version of a home owned by a hobbit in an orc-infested Middle Earth.

An amusement park in the Yamanashi prefecture in Japan, known as Gulliver’s Kingdom, seemed to be set for failure from the start.

It was built near the so-called Suicide Forest – due to no small number of suicides in the place – and a production facility of nerve gas.

The park was closed in 2001 after just four years in business, and today it is home to a massive statue of Gulliver, which continues to disintegrate and becomes creepier by the day like a corpse of a giant.

The moment you see this picture, the first thing that comes to your mind is either a horror movie prop or playground equipment in a ghost house. You’d be wrong.

As it turns out, the morbid climbing frame was located in a garden behind a church in Munich, Germany.

Regardless of what went through the designer’s mind when planning the structure, the result doesn’t even remotely resemble a fun playground for kids.

Not particularly a playground or amusement park, but Island of the Doll is arguably the creepiest place for children and adults to visit on vacation.

Located in the south of Mexico City in the canals of Xochimilco, the island is covered with hundreds of mutilated dolls all over the place.

Rogelio Sanchez Santana now takes care of the island and its creepy inhabitants, which belonged to his late great uncle, who said the dolls protected him from the spirit of a dead girl found on the island.