NASA has at least once referred to the oceans as “The Great Unknown.” We know more about the surface of the moon than we do about the ocean floor.

Although nautical exploration is indeed as old as humans, up until this day, we still know very little about the diverse species lurking deep underwater, and for good reasons.

Satellite imaging is only helpful to study the surface of the ocean – probably a little bit deeper. Downward from 200 meters underwater, light begins to decline to the point of pitch dark rapidly.

Artificial lights do help, but they cannot permeate into open water very far either. Let us not forget that the mounting pressure will crush most manufactured research instruments. Thankfully, some robots can dive deep enough and come back intact.

The oceans have always captured our imagination for many centuries; every once in a while, creatures from the deep appear closer to the surface, revealing their surprisingly bizarre shape and look, unlike any of their shallower counterparts, let alone land-dwelling animals.

Then the imagination takes free to roam; people wonder if the oceans hide even weirder creatures in their depth.

As it turned out, it does. Marine explorers use both human-crewed and uncrewed submersible vehicles to take a glance at this dark, mysterious place, then share what they have found thus far.

Also known as a living fossil, the frilled shark retains some prominent features of its prehistoric ancestors. It gets its name from the frilly gills and rows of backward-facing teeth.

A fully grown one boasts 25 rows that consist of around 300 needle-sharp teeth. Once it bites hold of the prey, there is zero chance of escaping. The frilled shark’s favorite meal is squid.

It can grow up to 7 feet long and is also known to feed on fish and even other sharks. Mothers only give birth when the offspring are mature enough to survive on their own. 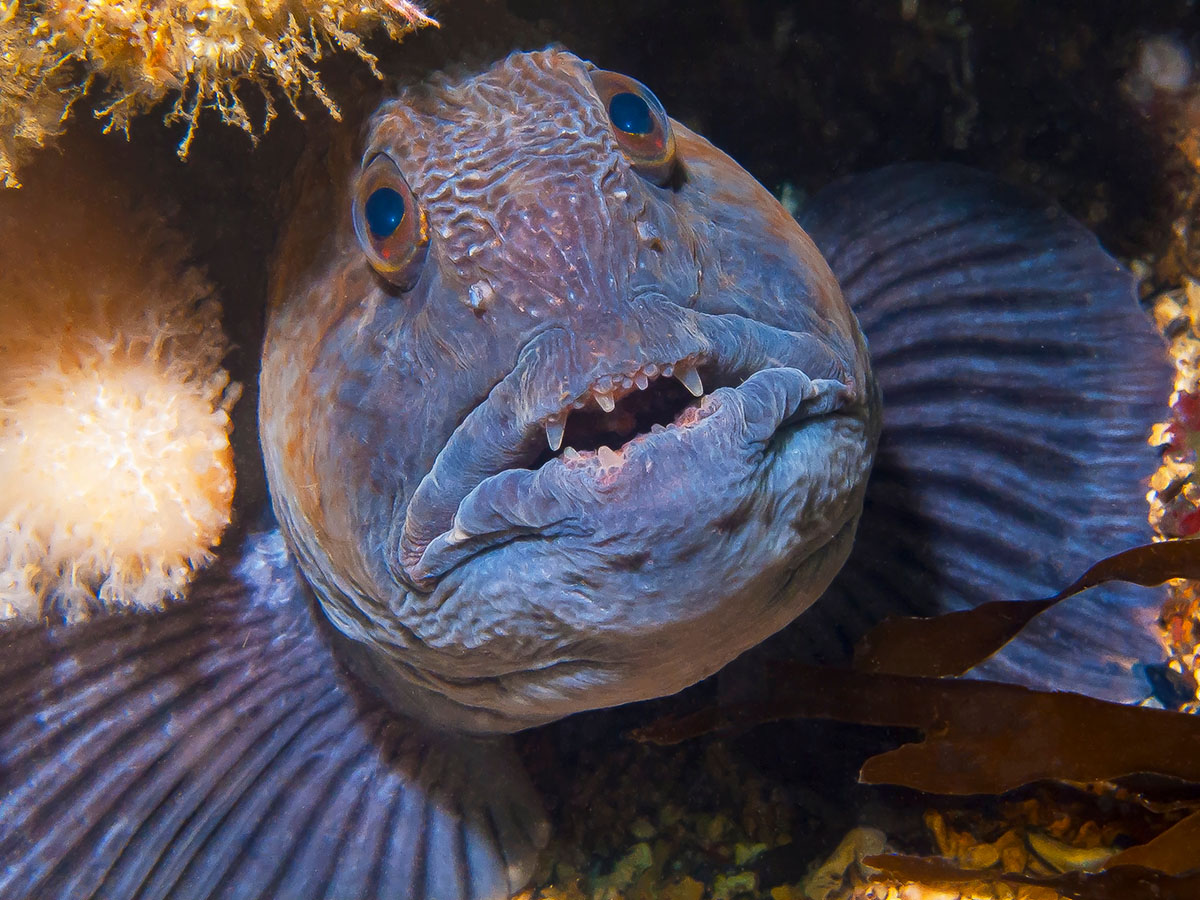 The predatory Atlantic wolffish is a ferocious predator but not aggressive toward humans unless provoked.

It has large pointy teeth that stick out of the mouth, even when closed. It can grow to 5 feet long and will eventually develop an eel-like body. Sometimes the fish is referred to as “wolf eel,” but it is not an eel.

They prefer chilling water at a depth of between 328 feet to 1,600 feet in the North Atlantic Oceans. Their blood contains several natural compounds to prevent it from freezing. People have fished Atlantic Wolffish throughout its range.

There is almost nothing in the features and characteristics of a Vampire Squid that suggests any resemblance to the bat vampires or fictional vampires in movies.

Instead, the squid gets the name from its glowing red bioluminescent and webbing that connects its eight arms like a cloak.

While it has similarities with octopuses and squids, the sea creature has its own family, of which it is the last remaining member. They are pretty small at about 6 inches maximum and comfortable at a depth of 10,000 feet. 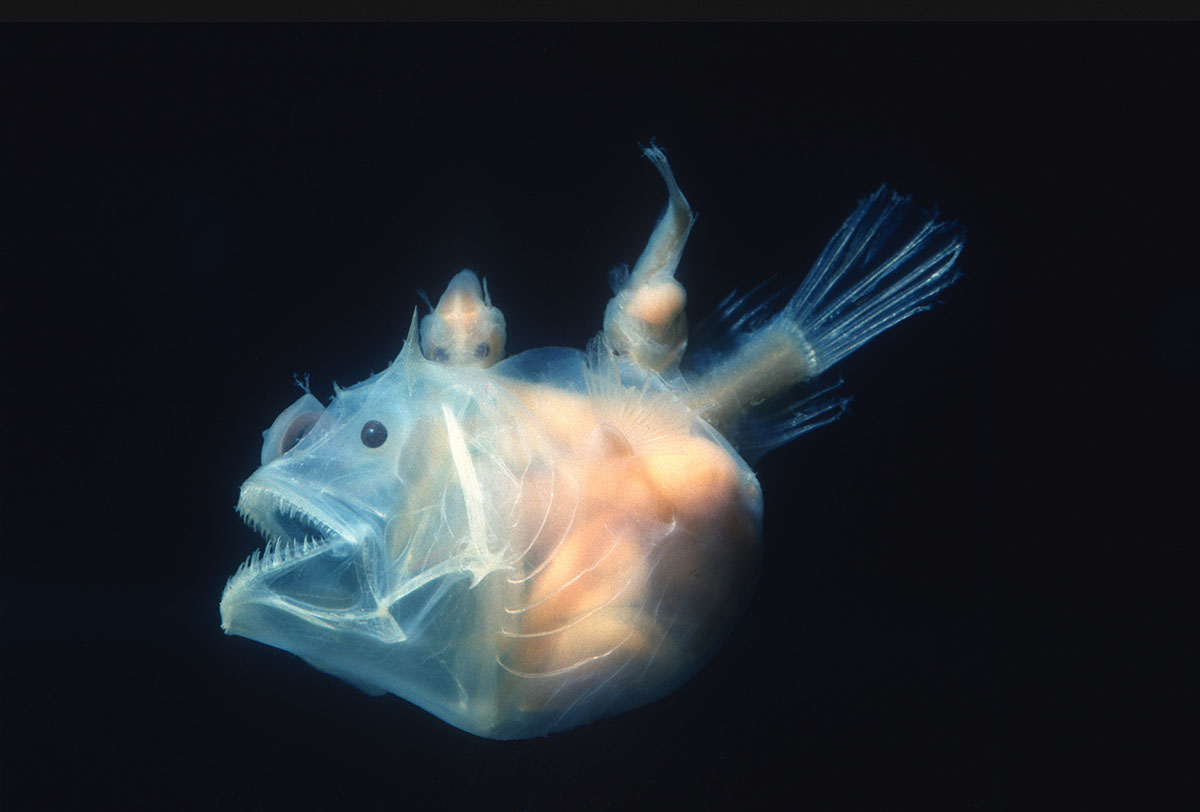 Ever since the dramatic versions of the anglerfish were seen chasing Nemo and Dori in Pixar’s “Finding Nemo,” the scary-looking fish has perhaps become a joint appearance in little kids’ nightmares all around the world. The real anglerfish looks just as terrifying.

It has a large head relative to the body and a crescent-shaped mouth filled with translucent teeth.

The most distinctive feature, found only in females, is a dorsal spine like a fishing pole that pulses light to lure prey. Some anglerfish can grow to more than 3 feet long, but most are only less than afoot.

The deep-sea predator lives in the eastern Pacific Ocean at a depth of between 700 to 3300 feet.

They spend most of their lives at those depths but are known to come closer to the surface in pursuit of their favorite prey, including small crustaceans.

Like some other bottom-dwelling creature, Pacific Blackdragon is bioluminescent. They have light-emitting organs along their belly to fool predators.

The organ next to each eye also functions like a beacon or a flashlight to help look for prey or potential mates. Even its tongue has some razor-sharp teeth. 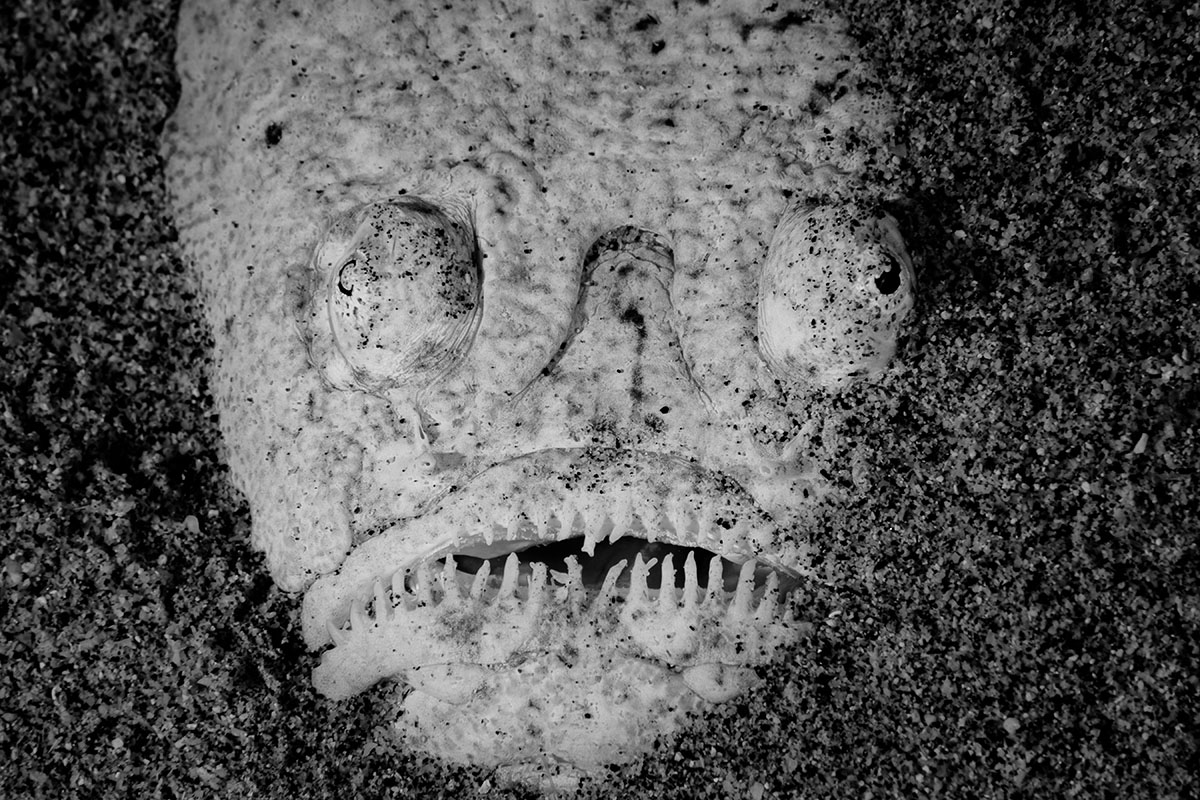 Despite the charming name of Stargazer, the fish are as creepy as they come. The eyes sit on top of the head, like other stargazer species.

To hunt for prey, they burry themselves underneath the sand. Since the eyes are facing upward, they could easily spot any unsuspecting small fish.

If sitting still does not work, they have a fishing lure out of their mouth, dangling in the water to lure in prey.

White margin Stargazers are found around Fiji, Samoa, the Red Sea, and Indonesia. Northern stargazers live in the deep waters of the Atlantic Ocean.

One of the deepest-living fish ever discovered, the fangtooth lurks in the dark floor of the oceans. They wield the most giant saber-like teeth relative to body size.

The term “relative” is important here because even the biggest fangtooth can only reach a maximum of 6 inches in length.

Harmless to humans, they are fearsome predators to squid. They cannot chew, so they choose to swallow prey in whole.

In addition, the fangs on the lower jaw look a little too long on their head that they developed opposing pockets on the sides of their brain to accommodate the length.

Scientists believe goblin sharks only come to the surface at night and spend the rest of the day in the depth of at least 4000 feet.

Their features are, at the same time, fascinating, unique, and strange. They have a flabby body, flattened snout, gray-pink coloration, and 50-teeth in their mouth.

They can protrude the snout to grab prey too. Sightings are rare; mature goblin sharks are about 10 to 12 feet in length. However, in 2014, an 18ft long goblin shark was caught and released by a shrimp fisherman near the Florida Keys.

Scientifically known as the Bathyphysa conifer, the deep-sea creature is indisputable proof that things can get weird on the ocean floor. They are also referred to as the “flying spaghetti monster” after the satirical Internet deity.

Workers at the oil and gas company BP spotted one of these monsters off the coast of Angola in 2015. Bathyphysa conifer is a member of the order Siphonophorae, not too distantly related to jellyfish.

Found in the tropical regions of all major oceans, viperfish are bioluminescent deep-sea dwellers. Their light-emitting organs positioned along the sides of the body are meant to attract prey.

They get the name from the overly long fangs that protrude from both upper and lower jaws. Pacific viperfish is the largest in the family, growing up to 1 foot only.

The teeth are so long they don’t fit inside the mouth and sit perilously close to the eyes. So before they can swallow a prey, they have to open the mouth wide enough that the jaws are vertical.