In July 2020, a deep-sea oarfish was found washed up on a beach in Mexico. The 20 feet specimen was discovered in the port city of Pichilingue inside La Paz Bay in Baja California Sur.

Another oarfish was also found the previous month, dying on a beach in Cozumel, an island in the Caribbean Sea about 100 miles south of La Paz.

The two brothers who spotted the struggling strange-looking sea creature could revive the juvenile fish and release it.

They watched it swim away, but it might not survive after all. In 2012, a smaller oarfish was stranded in Cabo San Lucas and died moments later.

Adult oarfish can measure at 30 feet long or more and prefer the temperate water of tropical climate at depths of more than 3,000 feet.

The shallowest they usually go is at around 600 feet underwater. Despite the length, oarfish lacks significant body mass, which helps it glide easily at depths of no currents.

In the unfortunate event that they venture too high, the weightlessness renders their chance of diving back and surviving unlikely.

Scientifically known as the Regalecus glesne, this member of the Regalecidae family is a strange-looking creature. It is the longest bony fish in the sea.

The origin of the oarfish name is not clearly understood, but it might have been derived from an oar-shaped body. Some people refer to it as ribbonfish or the king of herrings.

Although oarfish are deep-sea dwellers, sighting is not that uncommon. Thanks to their bizarre appearance, oarfish have spawned plenty of sea monster myths among ancient fishers. 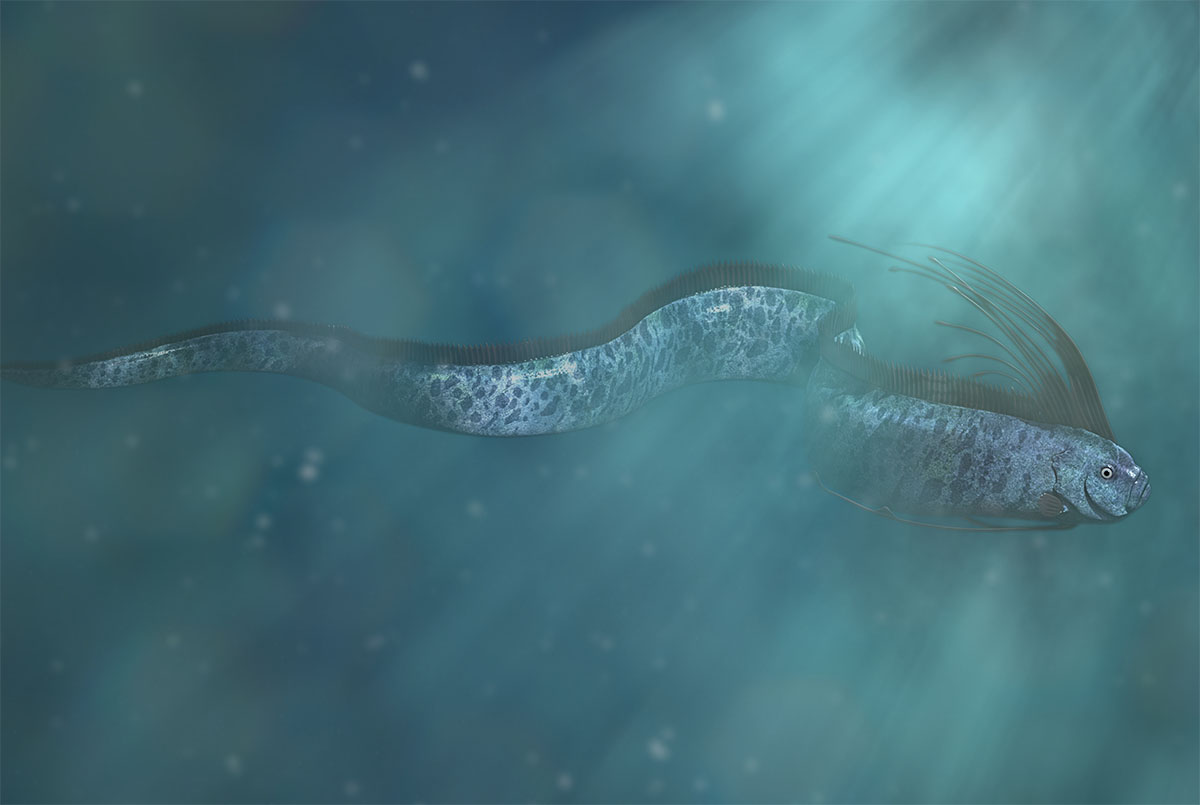 They are aquatic species found mainly in the depths of the Mediterranean Sea and the eastern Atlantic Ocean.

Although they glide at around 600 feet underwater most of the time, they have been known to dive down to 3,000 feet.

As strange as its appearance, oarfish may occasionally make an ascent to just 20 feet shallow.

The most plausible explanation is that they travel up above their comfort zone in search of food. Much like any other deep-sea creature, the exact population is unknown. 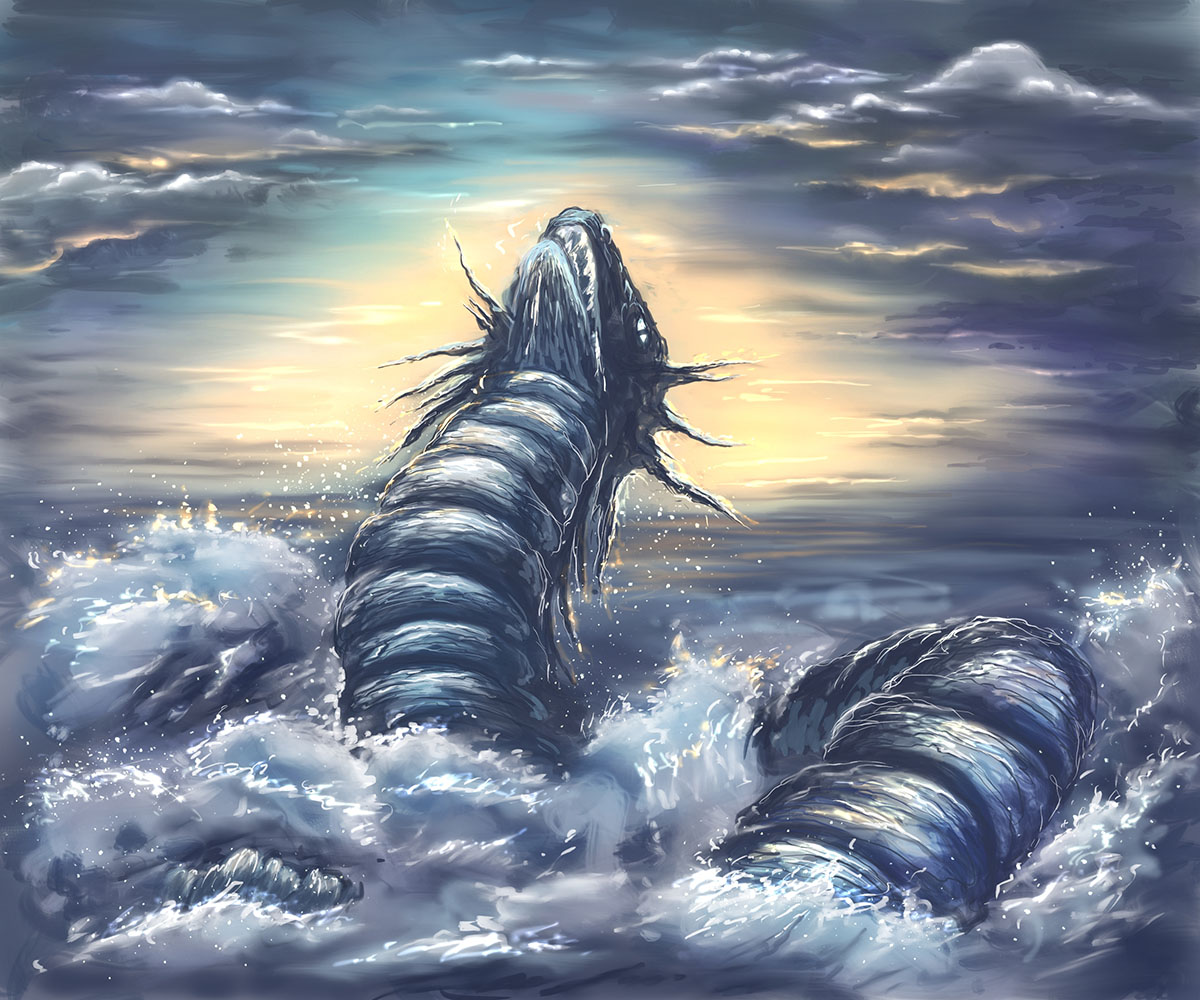 In many cases, when oarfish are washed ashore, they become objects of fascination among onlookers. Due to the minimum weight, they are stranded on beaches often after a storm.

Oarfish also have a habit of floating on the water surface when they are sick or dying, which perhaps is responsible for stories of sightings of sea serpents or monsters by beachgoers.

It is suitable for the oarfish that their gelatinous flesh is not edible; the absence of commercial fishing activities usually means a good chance of retaining a healthy population. 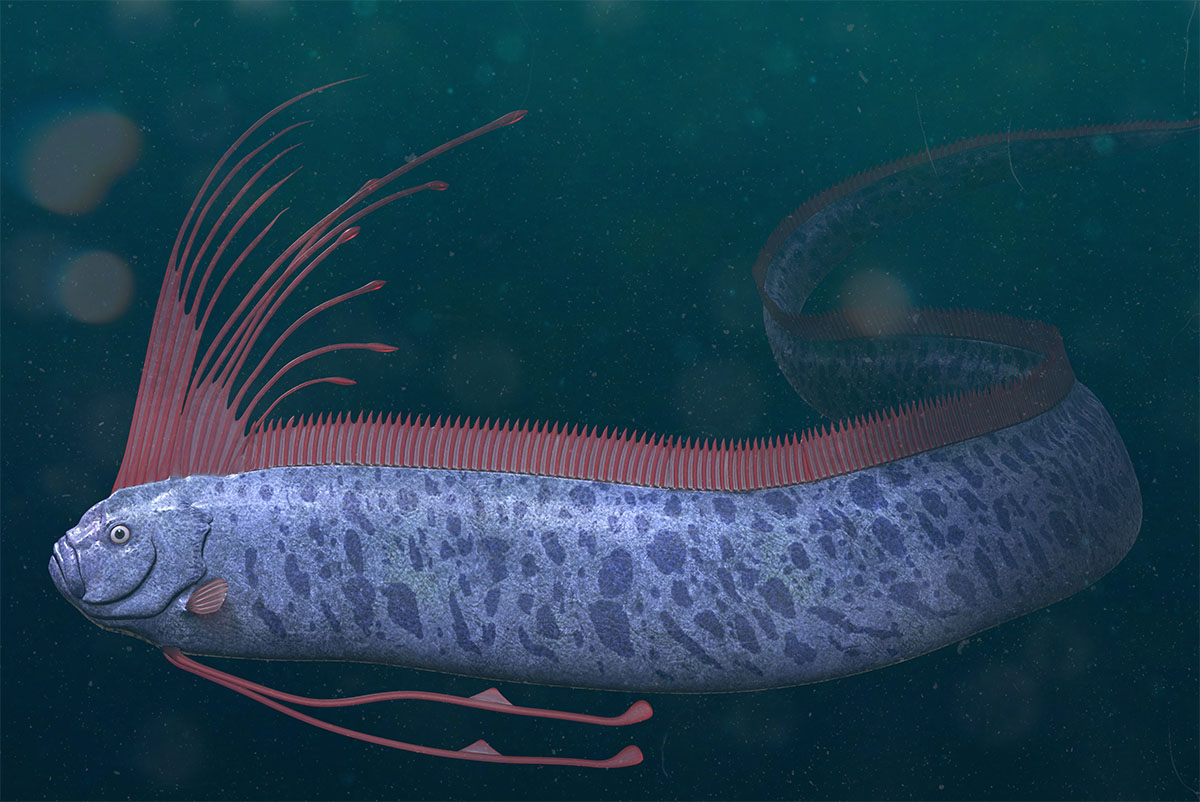 In addition to the long ribbon-like body, the most noticeable feature is the lack of scale. The body is covered with blue skin and ornate red dorsal fins.

A fully grown oarfish can stretch to 50 feet long and weigh 600 pounds. Any specimen of such size and weight is less likely to get washed ashore, even after a heavy storm.

Across the entire body, length is a series of 400 fin rays, each with a tiny visible spine projecting through the tip. Pelvic fins are elongated and all of the same color. Oarfish have no visible teeth.

A 600-pound fish does seem pretty heavy, but for an oarfish, the amount of weight is somewhat undermined by its length, which at 50 feet, is longer than a school bus.

But then again, a specimen that large could be an exception. The most extended confirmed individuals only reached about 35 feet long.

Another impressive feature lies atop the head, consisting of the dorsal fins’ first few and most symbolic elements.

Observed from the sides, it is as if the fish is wearing a natural crown, hence “the king of herrings” nickname. 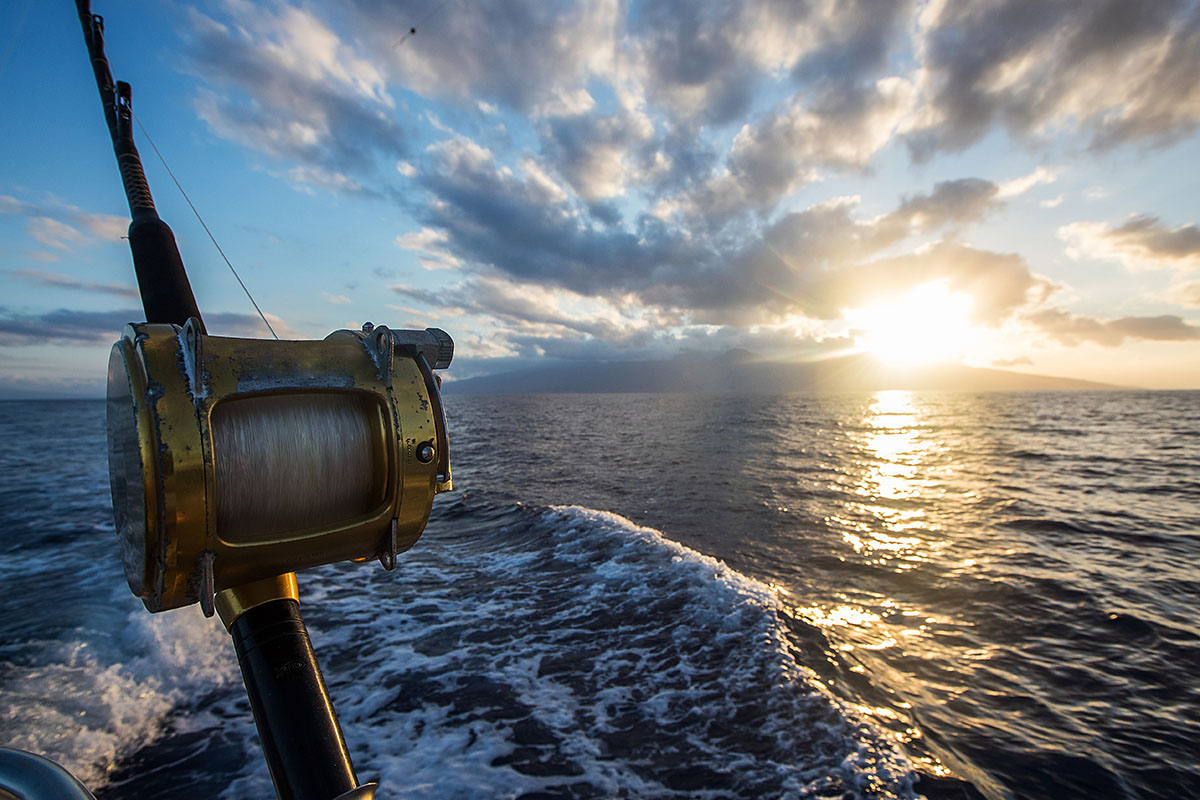 Most of what we know about the oarfish has been learned from specimens accidentally caught by fishermen or washed ashore.

Sometimes they approach the surface at night as they are attracted to boat lights and end up in the fishnet.

Scientists have also learned that oarfish have a small mouth and feed mainly on plankton, crustaceans, and small squid.

They strain the prey from the water using gill rakes. Although strange in appearance and perhaps scary to humans, oarfish are thought to be a food source for larger carnivores such as sharks. 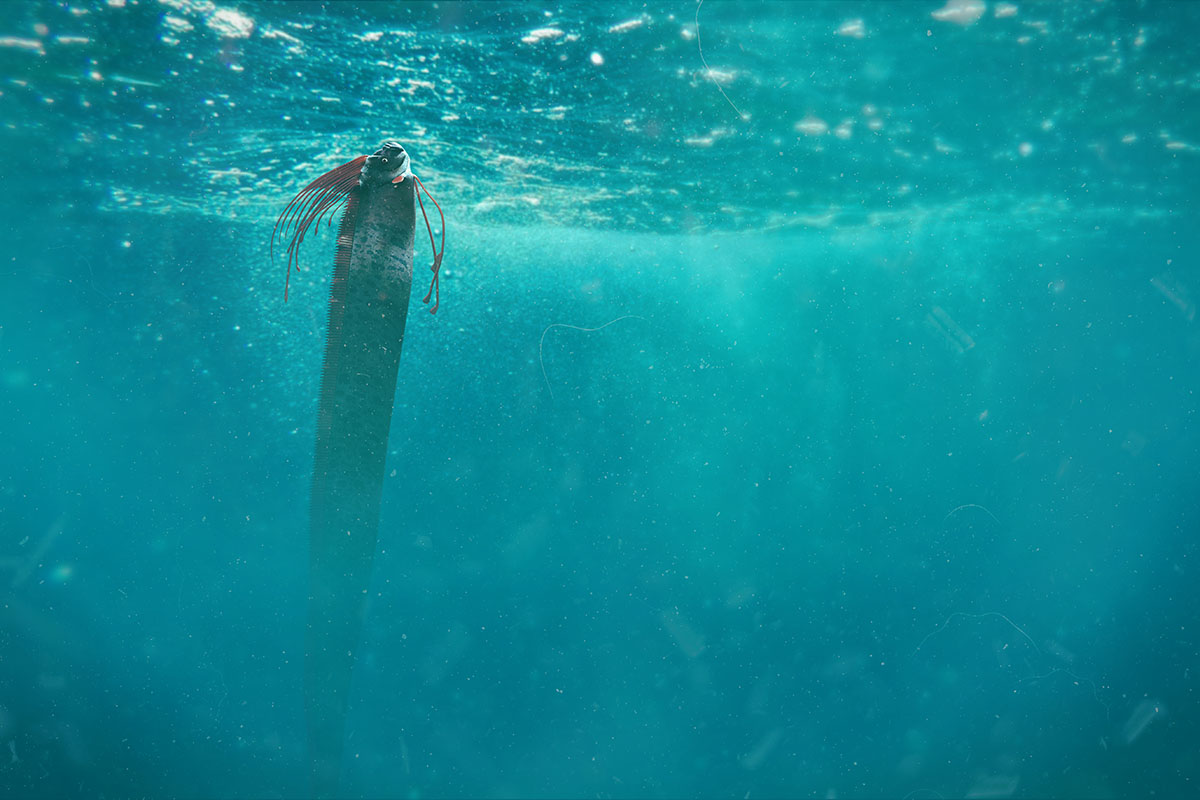 In 2001, a team of US Navy personnel stationed in the Bahamas filmed a live oarfish for the first time. The specimen was swimming by undulating the long dorsal fin in a wavelike motion.

Although moving, the body remained relatively straight. This type of fish locomotion is the “amiiform” mode, the same kind of movement that the bowfin makes.

However, oarfish are capable of swimming upward in a vertical position too. It is believed that they swim straight upward when searching for food. 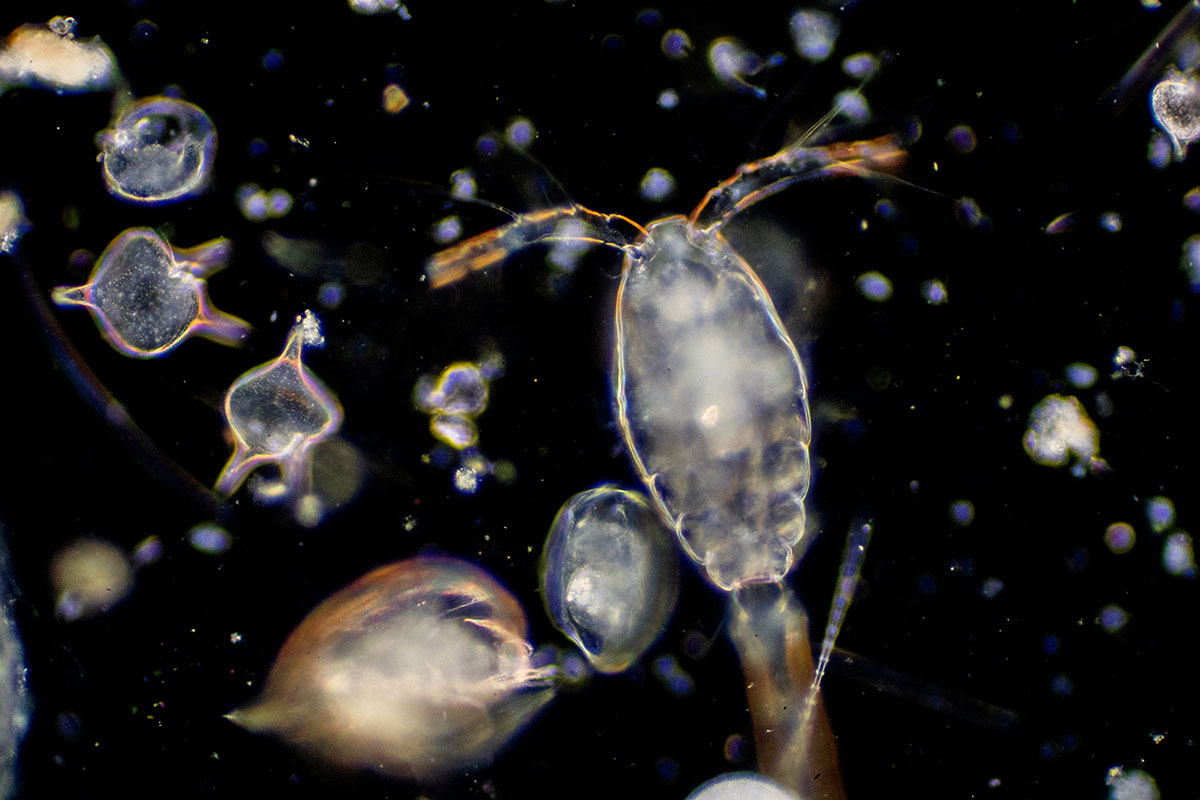 Oarfish eat by filtering planktons and small prey from the water as they swim with their mouths open. Preferred habitat in the dark depth of the ocean makes it difficult to make an informed calculation of their conservation status.

Even their reproductive habits are largely unknown. Oarfish have been observed spawning off the coast of Mexico between July and December.

The eggs are abandoned and left floating on the surface. Once hatched, the larvae feed on planktons until they are mature enough to eat larger animals. Adult oarfish most likely are solitary creatures. 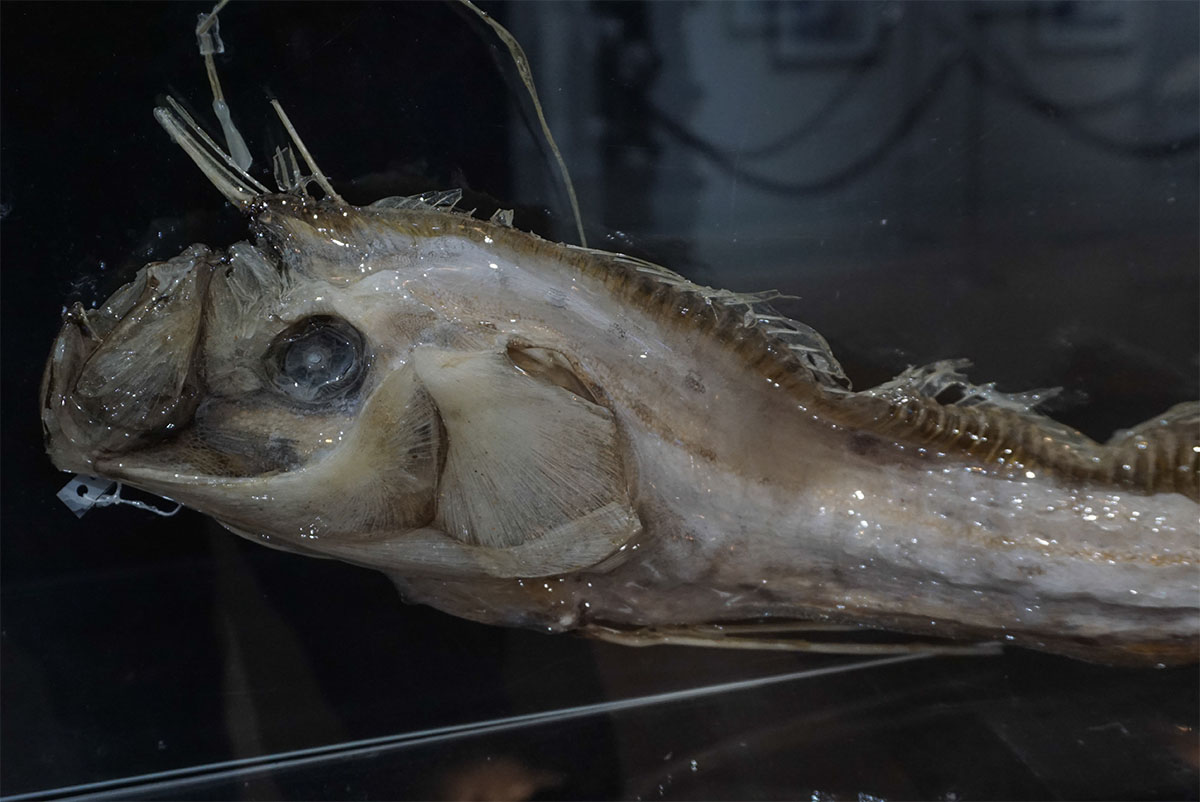 Approaching fishing boats at night in a vertical swimming position with a “crowned” head, oarfish is like a member of the royal family from the ocean’s depth, welcoming humans to the water.

The combination of its body shape, appearance, behaviors, and tendency to get washed ashore after a storm makes up the perfect ingredients for sea serpent myths, which have become parts of most maritime cultures worldwide.

Some even say the mythical creatures are trying to attack people, despite being toothless and harmless.

According to Japanese folklore, oarfish that appear or are washed ashore from the ocean’s depths carry warnings or signs that an earthquake is about to happen.

Oarfish made headlines after the 2011 Tohoku earthquake, which eventually caused a meltdown of three nuclear reactors and killed 19,000 people.

However, there has been no correlation whatsoever between any significant earthquake since 1928 and oarfish sightings.

No researchers, professionals, and amateurs alike could confirm any association between the phenomena.