The Kardashians rose to fame based on their public image. They don’t do anything. They just are.

The image the public has of them is essential for the whole Kardashian clan.

They do tons of photoshoots, and the pictures they post on their various social media accounts are always carefully selected.

Yet, no matter how careful they are with their public image, sometimes unflattering images of a Kardashian or another surface online.

All publicity is good publicity, you’d say, but as far as the photos on this list are concerned, you can bet the Kardashians would want them deleted and forgotten. Not going to happen!

True, Kim Kardashian was pregnant when this picture was taken, and it’s natural for a woman to put on some weight at such a time.

Still, you have to admit that the outfit she’s wearing was a terrible choice. It must have hurt a lot when pictures of her and the Penguin of Batman Returns went viral.

The Kardashians would want you to believe they’ve always been rich and glamorous. Yet the many pics documenting Kim’s early days tell a different story.

When she was just an aspiring celebrity, Kim made herself known as one of the many wannabes in Paris Hilton’s inner circle. Just have a look at the much younger and stoned Kim!

8 Look At That Face!

Makeup is essential when paparazzi constantly hound you. Still, with all the makeup artists working for them, sometimes there’s only that much they can do.

Just look at Kendall’s face in this decidedly unflattering photo. Did you think zits happen only to the non-famous?

God only knows what she thought when she decided to use makeup to make her eyebrows vanish. Kim does have nice eyes, but can you focus on them with the disturbing lack of eyebrows?

We get it, the Kardashians are in a completely different league compared to us, but here she looks like she’ from a different species altogether.

There are probably many photos of her life as Bruce that Caitlyn would love to see disappear, which is one of the worst ones.

Unless you’ve been living under a rock for the past decades, you know all about Kendall and Kylie’s dad, Bruce, becoming Caitlyn.

If you look at this picture, you cannot even blame Bruce for wanting to be something else. Caitlyn would never be caught with such hair!

5 The Infamous Tape That Made Kim Famous

Just in case you forgot how the whole Kardashian story began. It was a very raunchy sex tape featuring a very young and less known Kim!

Rumor has it was the ‘momager’ herself, Kris Jenner, that leaked the tape to get her girl some attention! 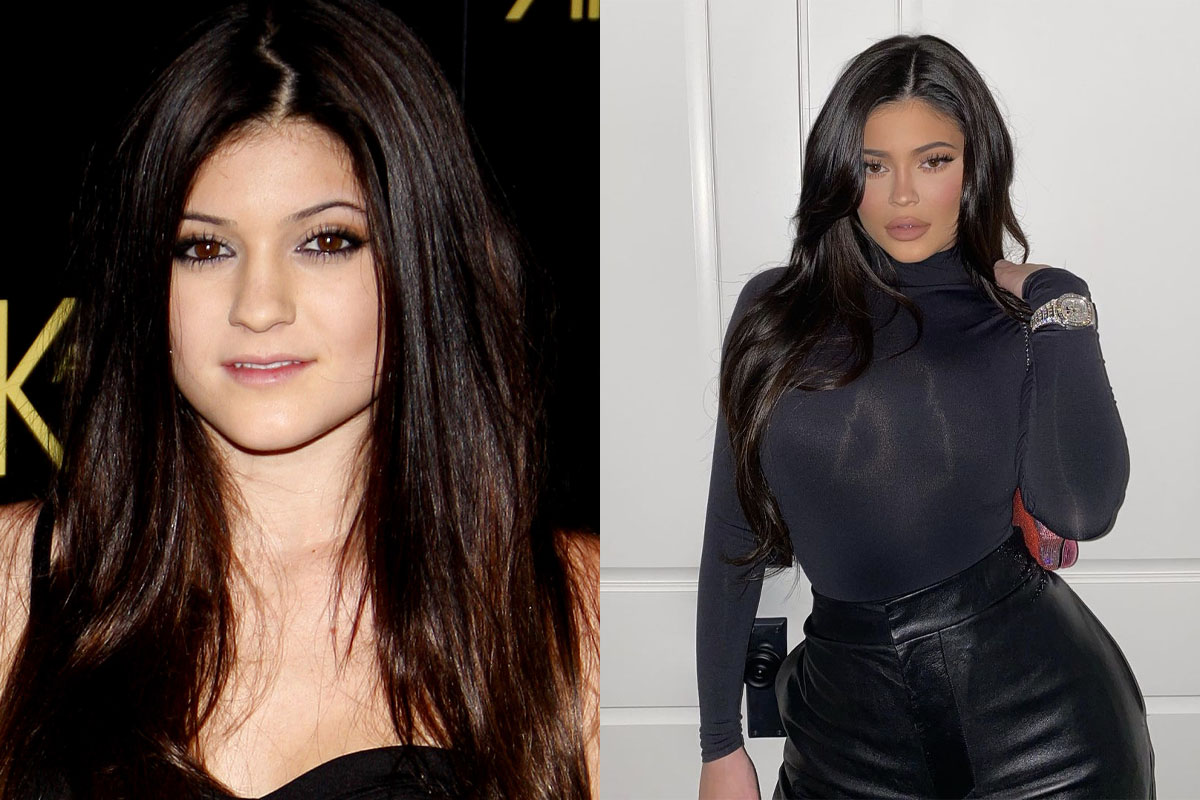 4 Kylie: Before And After

The youngest of the clan, little Kylie, has been praised for making a fortune by 18. If you look at some of her teenage photos, she was a nice young girl.

Unremarkable, but cute. That’s not good enough for a Kardashian, though. The new Kylie does look better, at least based on the current Instagram dictated standards. But also plasticky!

3 The Pain Of Being Fashionable

First of all, those shoes look just terrible and whoever created them deserves to be shot. Second, they look like a medieval torture implement on Kim’s swollen legs.

All pregnant women have to deal with swollen feet’ misery, but most are sensible enough to wear comfortable shoes. By the looks of it, she must have been in a lot of pain, and the shoes look horrible on her.

Cellulite is one of the women’s most formidable enemies, and when it strikes you, there’s little you can do but hide it. The outfit Kim was wearing that night was gorgeous, and you can see why she chose to wear it.

But still, maybe a good look in the mirror would have revealed why it wasn’t such a great idea after all. Go to the gym for a couple of months, go on a diet and then wear something so revealing; that’s how you do it.

So Kim wasn’t always the voluptuous queen she is today? Who would have guessed? Part of the reason Kim positively hates photos like these is that they are proof of how many surgeries she’s had.

Never mind the glasses; look at the nose they’re perched on! Yeah, we know quite a bit larger than the one she has today and swears she was born with it!