by Factionary 8 months ago1 month ago
71.2Kviews

Mara Salvatrucha, more infamously known as the MS-13, is an international criminal gang based in Los Angeles, California. It originated in the city in the 1970s and 1980s with an “initial” purpose to protect Salvadoran immigrants from other existing gangs in the area. However, the gang shifted from its original course and turned into a criminal organization.

One thing most people often overlook is the fact the MS-13 did not start anywhere else in Latin America and then come storming the United States through the southern border to go about all its criminal conducts in the country.While many (if not most) of the original members were immigrants, the gang – as an organization – formed in the United States.

In the 1970s when El Salvador was still in the middle of a devastating civil war, people from the country fled to Los Angeles and settled in an area that was already controlled by other gangs.

They socialized and bonded with other groups as a method of protection, and eventually formed their own gang now known as the MS-13.

Mara is the term used in El Salvador for “gang.” Salvatrucha is a combination of Salva for Salvadorian and Trucha for “alert” or “look out.”

The number 13 refers to M (the 13th letter of the alphabet) yet it also denotes the gang’s allegiance with a prison gang called Mexican Mafia.

Members of MS-13 are not just men, but also a lot of menacing-looking women who are involved both directly and indirectly with the gang. Here are some pictures and quick facts about them. 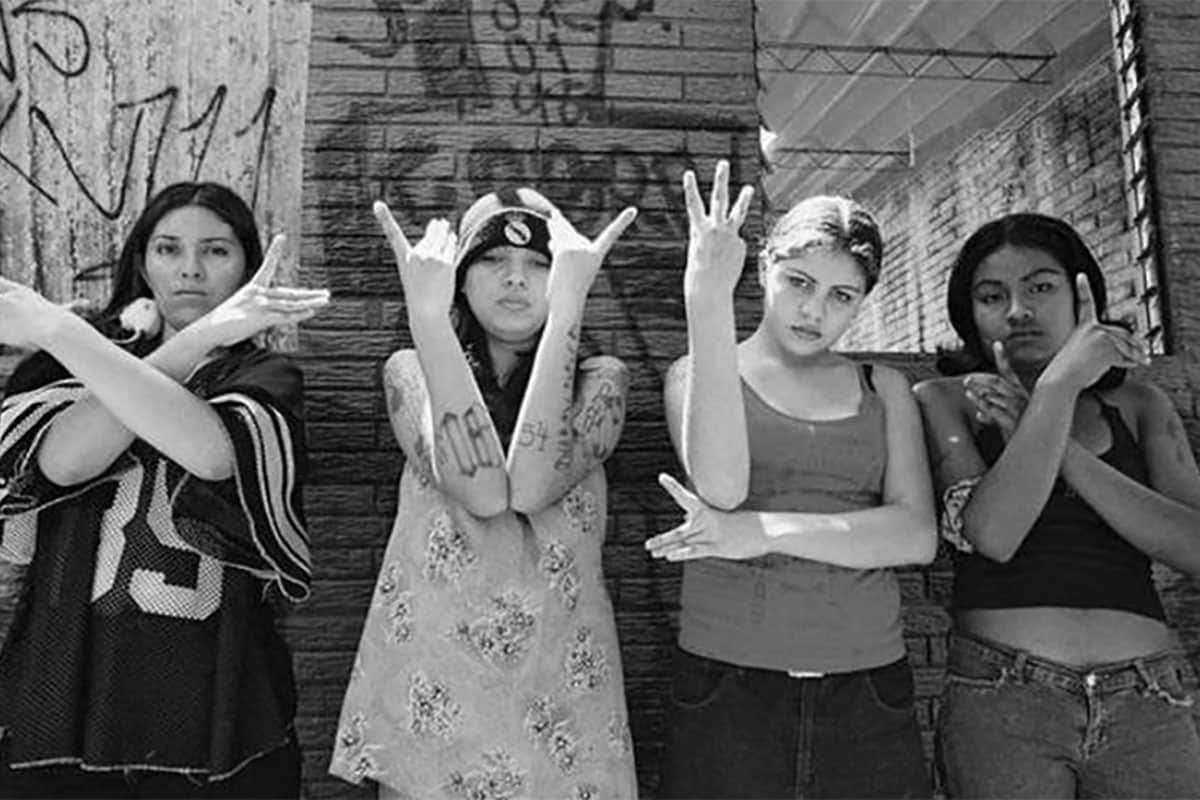 Most gangs have their own signature initiation process. Sometimes they require new recruits to commit very specific type of crimes and choose particular victim for the purpose. Things are no different in MS-13; and initiation process applies to both male and female members.

One thing that makes MS-13’s initiation process a little bit peculiar is that all new members need to have at least one connection already in the gang, whether a friend or family. An existing member must be able to vouch for new recruit to get rid of any possibility of disloyal personnel.

In some way, this helps the organization to eliminate parts of the selection process. Potential recruits must be willing to face hardship of any kind as a demonstration of loyalty.

A lot of young women who grew up in the area controlled by the MS-13 ended up joining the gang anyway. Many of them believe that being a gang member will make them look fierce and help protect themselves from rival gangs on the streets. 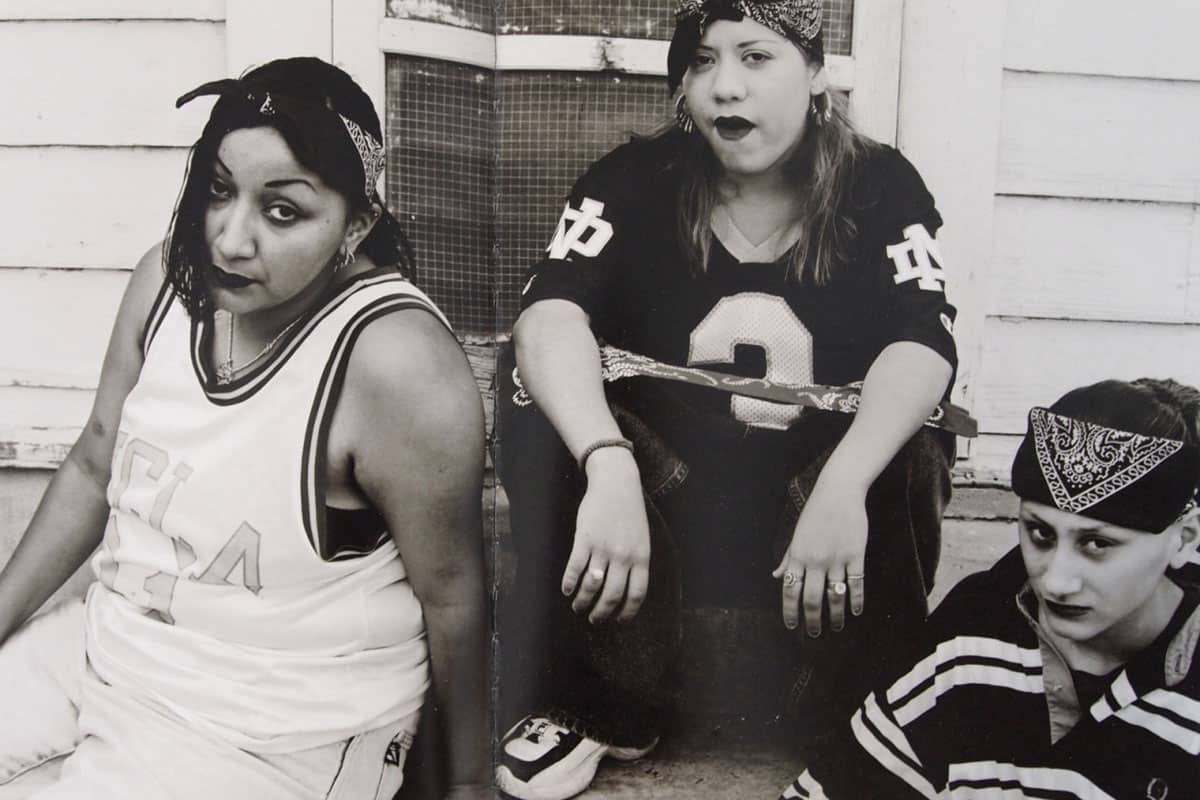 Once a person is approved as member, there is no turning back. It is almost impossible for any gang member to quit the organization, unless by death. The only way a member can quit is if the person dies. MS-13 takes loyalty very seriously, but in this case it is not necessarily a good thing.

Imprisonment and death come first before betraying fellow members or the gang in general. Once again, the rule applies to men and women members. Traitors are punishable by brutal death. For MS-13, traitors (sometimes known as rats) are considered the more dangerous enemies than rival gangs.

Even if a person joined the gang in young age, but then decided to have a family later on, quitting is not really an option. This means the family including spouse and children have all the likelihood of being exposed to the lifestyle of a criminal organization on a daily basis.

Considering new recruits enter the gang during teenage years, many times they simply don’t understand the full scope of all sorts of problems they unknowingly embrace. 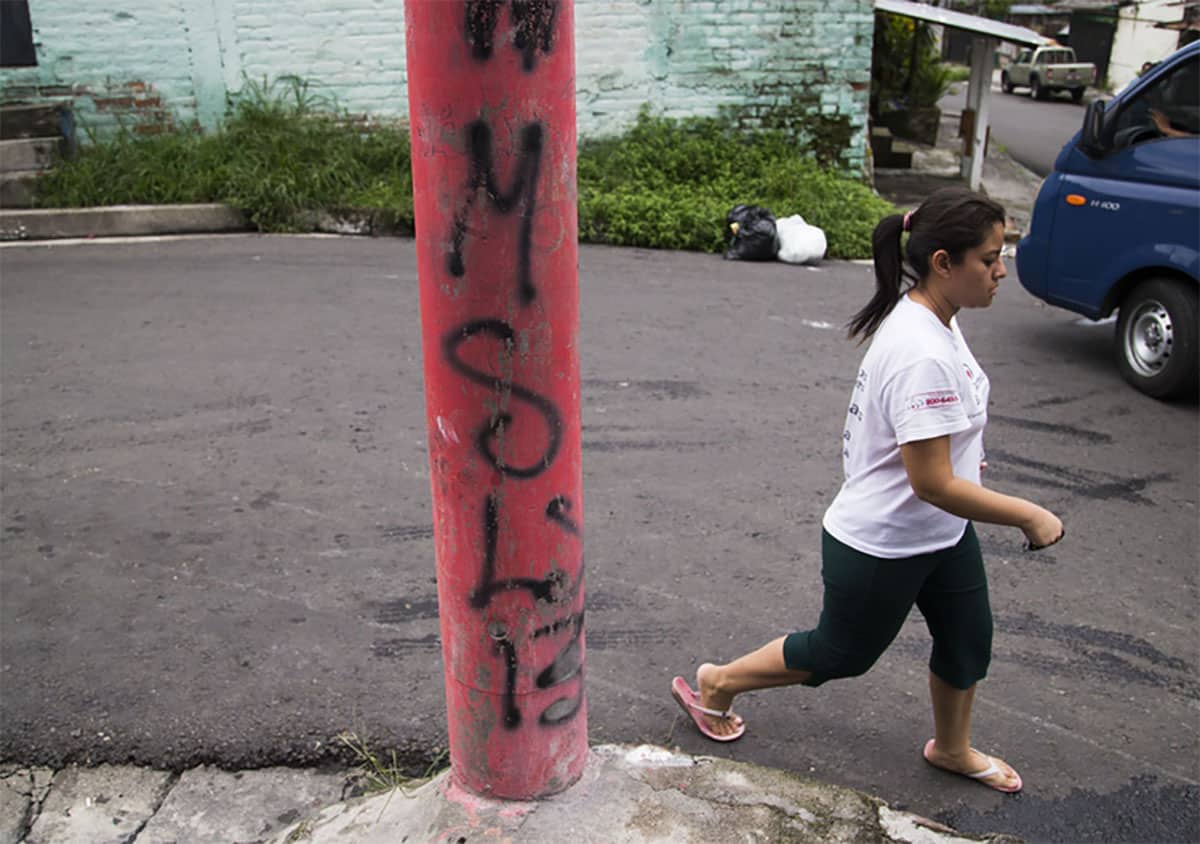 A typical method MS-13 employs to mark territories under its control and threaten enemies at the same time is making graffiti. A quick spray of paint on the wall (or any landmark) to write a “we were here” message is more than enough to frighten just about any regular passer-by.

Members are heavily tattooed, some even proudly ink their face to identify themselves as gang member, and the graffiti validates their preference on the use of signs and symbols. Members seem to have no hesitation to paint graffiti even on government properties too.

A sudden increase of graffiti has been recently discovered at border patrol points, suggesting an influx of MS-13 gang members possibly crossing the international border (from South America to North America vice versa) through illegal points of entry. The graffiti is intended as a message to taunt the authorities. 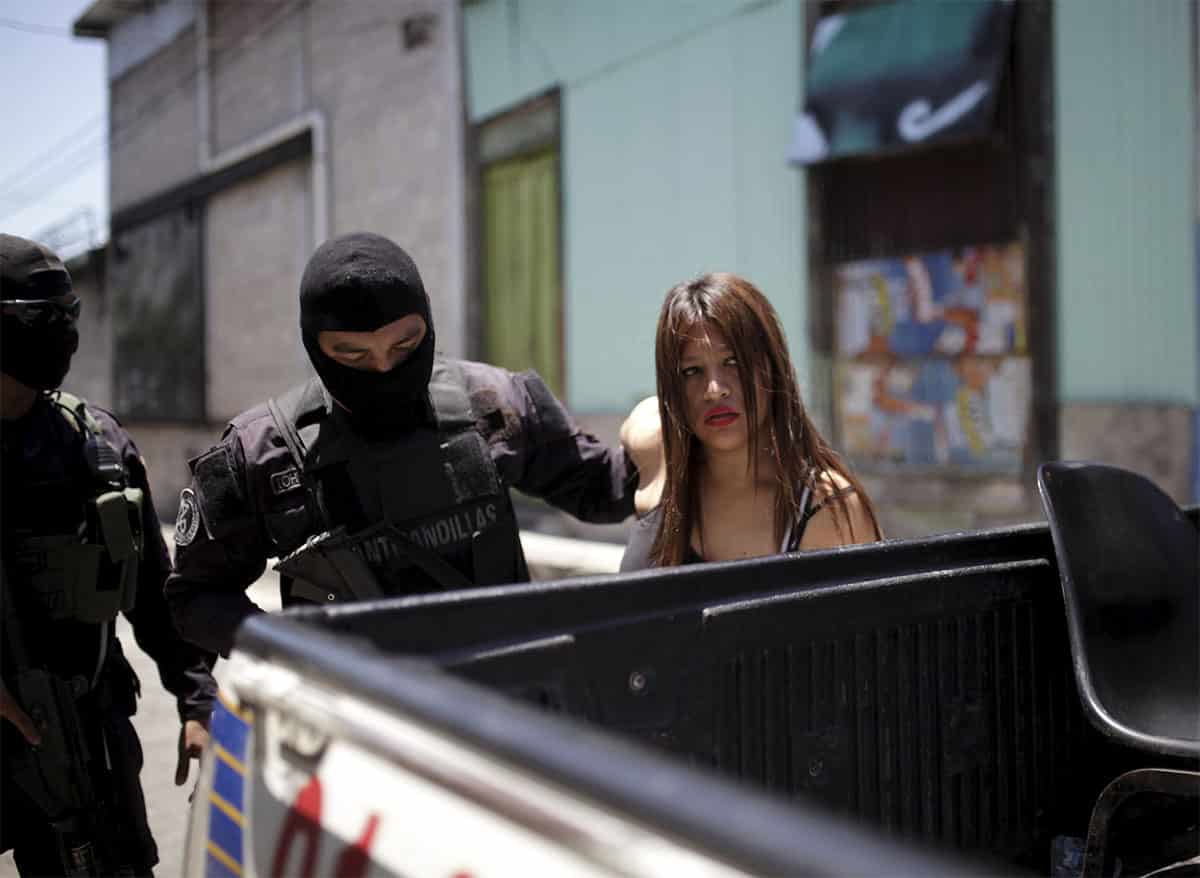 7 Prison Is Nothing Unusual

Members of MS-13 gang thinks of imprisonment as nothing out of the ordinary. Many of them including women members have served time in prison at least once in lifetime. It is almost impossible to pinpoint the exact number of how many MS-13 members have served imprisonment, or are still behind bars, because the gang never stops recruiting new members.

Prison is also a potential breeding ground as members meet new recruits. It is possible that the gang actually encourages locked-up members to recruit as many people as possible to extend the gang’s territory and control.  The more members a gang has, the easier it gets to defeat rivals, both inside prison and outside.

For women members being locked-up, they often become easy targets for rival gangs which also have members on the same prison. Acts of violence between gang members also happen inside correctional facilities; the biggest gang in prison targets another gang with fewest members. 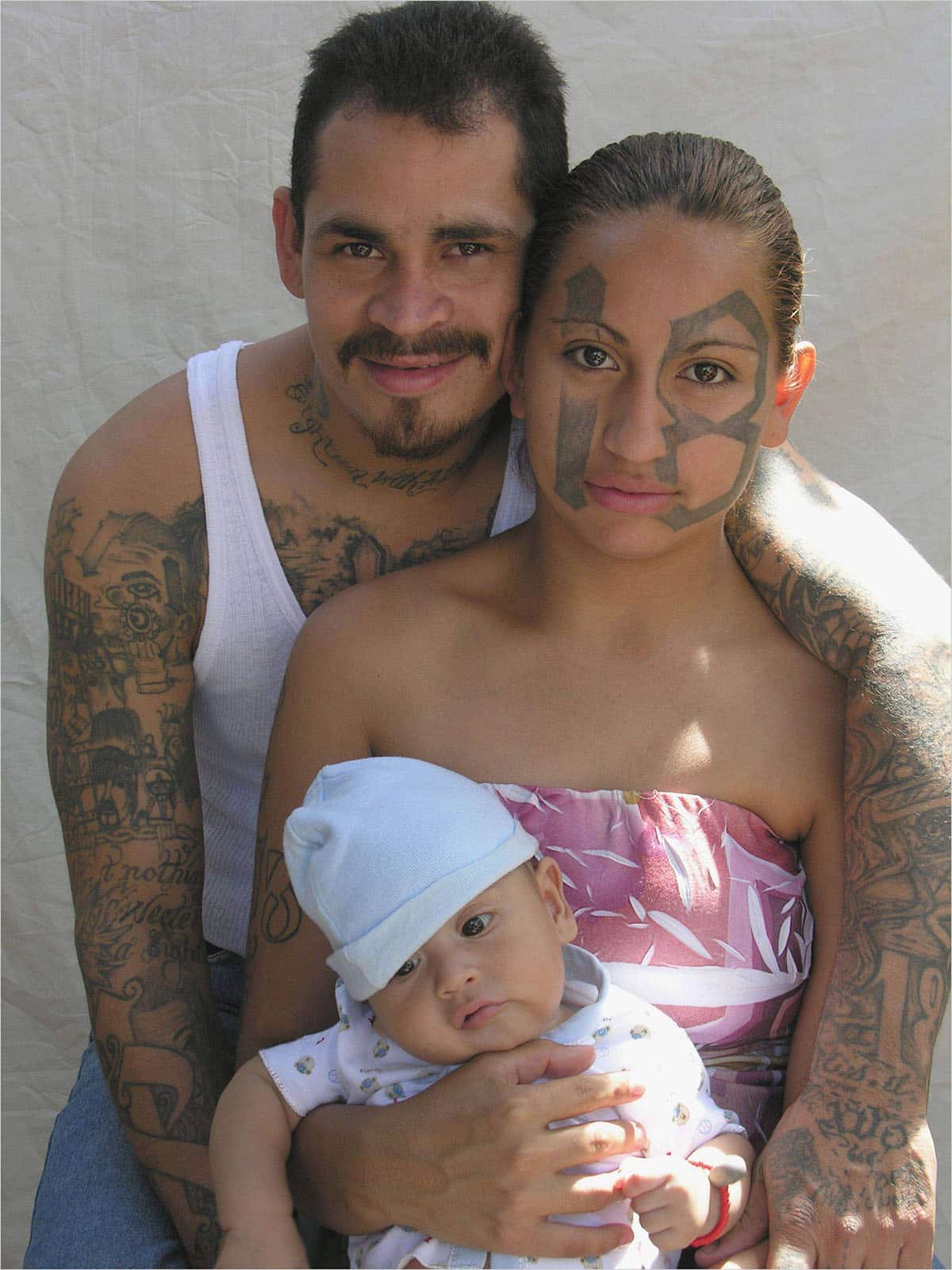 6 MS-13 Women Have No Problems Having Children

As mentioned earlier, many MS-13 members were recruited at young age, during the stage of life where they didn’t fully grasp the idea of gang lifestyle and all the potential consequences.

Most MS-13 women members actually end up in a relationship with fellow gangsters. The relationships are often serious which develop into marriage and family. When all outsiders are seen as threats, the only option if they want families of their own is to marry another member.

In the photo above are Bambam (26) and his girlfriend Little One (19), along with their 2-year old son. Little One had a supportive family, but she decided to get into gang lifestyle in El Salvador at young age.

Both Bambam and Little One are currently incarcerated in El Salvador on gang-related charges. In El Salvador, there are more than 2,000 MS-13 members serving time in prison.  For the couple, imprisonment is perhaps nothing unusual, but it is another story for their kid. 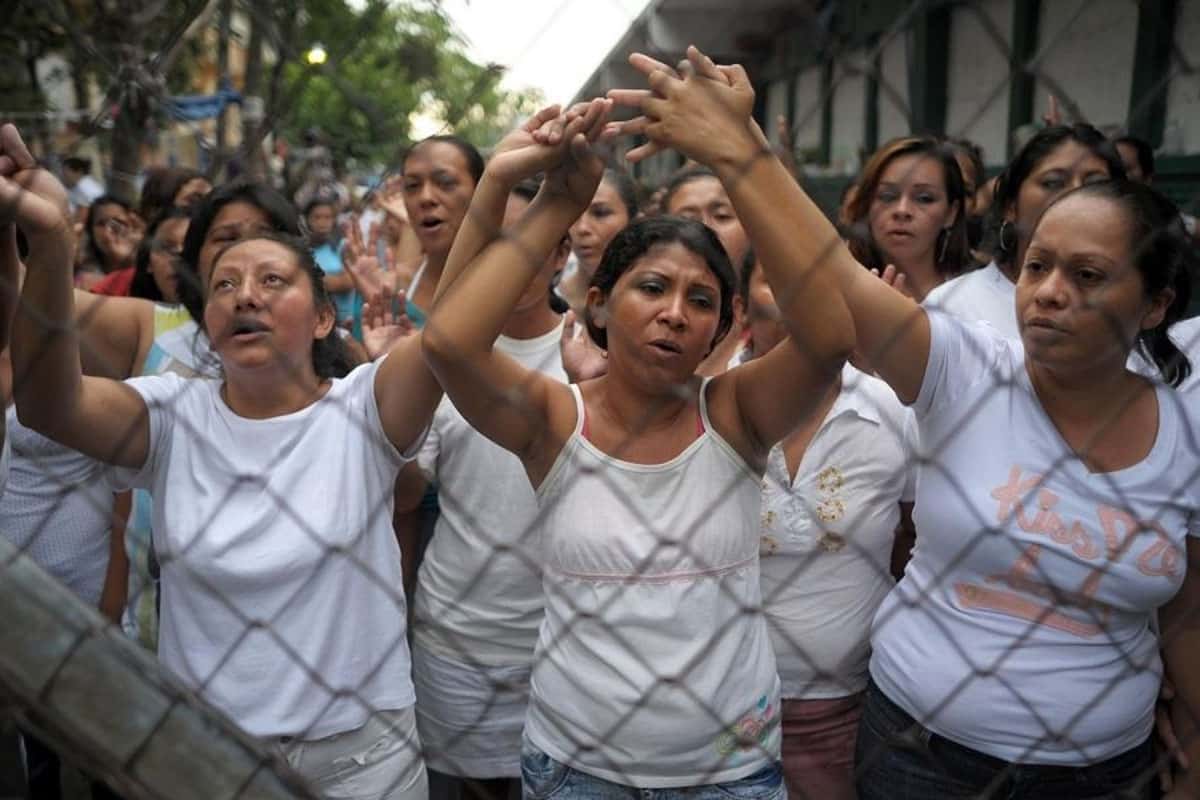 5 The Gang Is The Family

A lot of members or new recruits join a gang only because they want to be part of community and feel the sense of belonging. Now that they are part of a group, they want to be considered important, and so they are willing to contribute to the success of the gang. Unfortunately, notable contributions often have to be in the forms of criminal conducts.

In countries such as El Salvador, street violence is quite common. Being a member of a gang provides sense of safety because people will not risk their lives attacking a gang member; the fear of retaliation is too much to bear.

It does appear that gang membership is a strong attribute that can support survival in a rough world filled with violence. Sometimes to protect its members, the gang will not hesitate to launch attack on rivals or the authorities.

Going to prison to defend the gang is regarded as honorable action by fellow gangsters. This is why members have no problems breaking the law, making them even more dangerous. 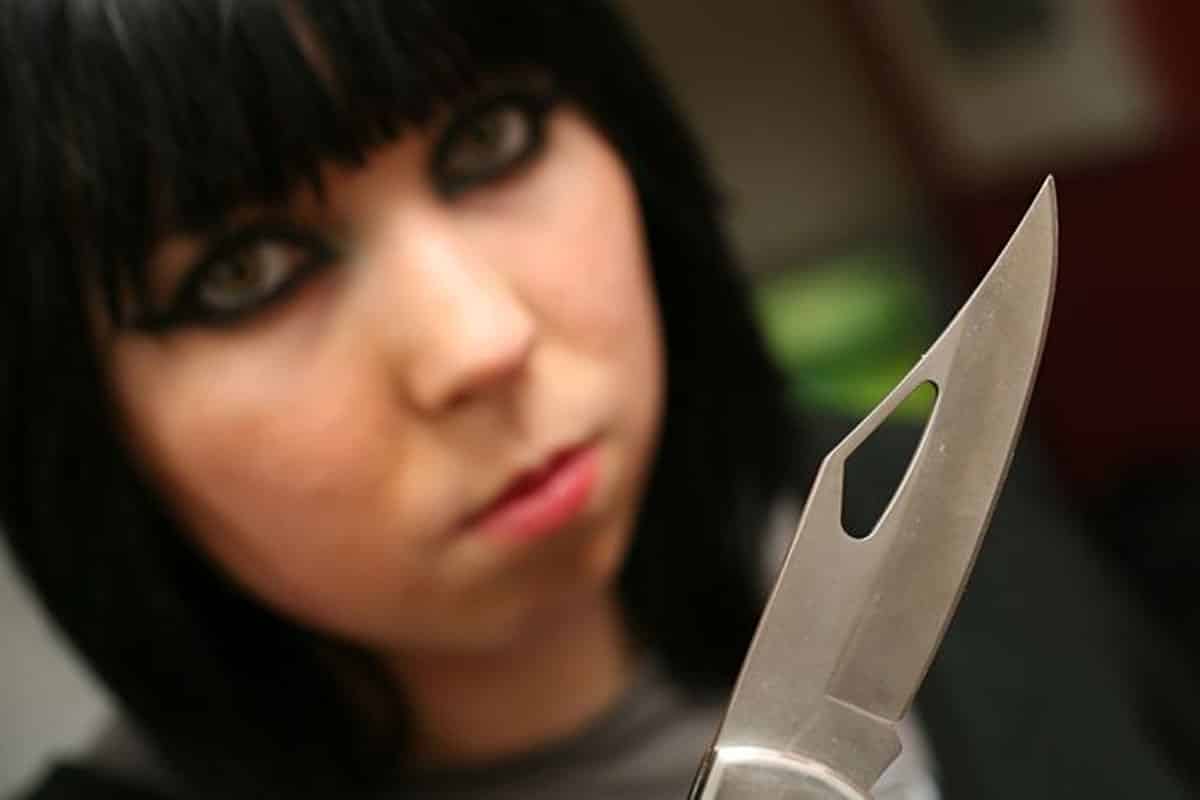 During the 1980s when MS-13 was still much less of a threat than it is today, the typical form of confrontation was fighting with bare fists. As the gang developed its size and activities, it grew to be more violent and used a variety of weapons including chains, knives, and even guns.

It is believed that one of MS-13’s lucrative activities is weapons trafficking. The gang buys guns to arm members, which then can offer their services to commit crimes for other organizations.

It is a risky business, but it is a profitable practice at the same time. This also means gang members have access to a lot of dangerous weapons.

By one estimate, MS-13 really is a criminal organization operating various illegal businesses worth of multi-million dollars. Let us not forget that the gang is sometimes funded by other large criminal groups to engage in criminal activities.

It keeps the money flowing in, and it is easier to attract new members with the promise of wealth. This makes sense because a lot of illegal immigrants coming into the United States arrive with nothing and hope to start a new life. They all need money to do that, and often jobs are hard to come by. 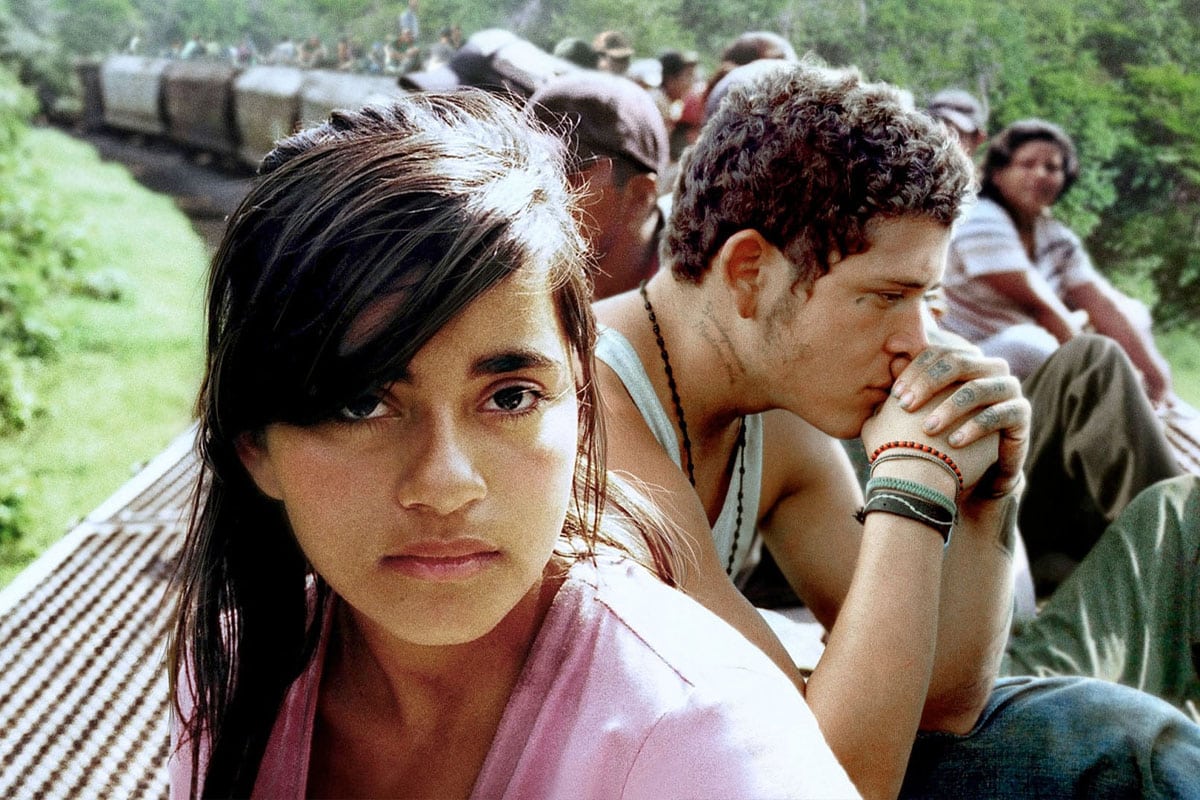 3 The “Illegal” And Scary Business Side Of It

If there is one thing that keeps MS-13 as one of the most prominent criminal organizations for nearly 4 decades, it is money. The gang is constantly looking for new lucrative business opportunities; it does not really matter if the business was illegal.

The lack of moral compass in everything members do for the sake of the gang’s longevity makes everyone of them more menacing. They are considered deadly, and have no problems engaging in all sorts of violent activities.

MS-13 runs various illegal business operations such as drug trafficking, violent crimes, weapons resale, and even human trafficking. The gang has been charged with witness intimidation, murder, r*pe, kidnapping, racketeering, and extortion. None of them is minor violation; all are serious crimes.

MS-13 is not just a small petty group of pranksters spreading false threats in a small town; it is a serious criminal organization with members who leave bloody footprints just about anywhere in Los Angeles. 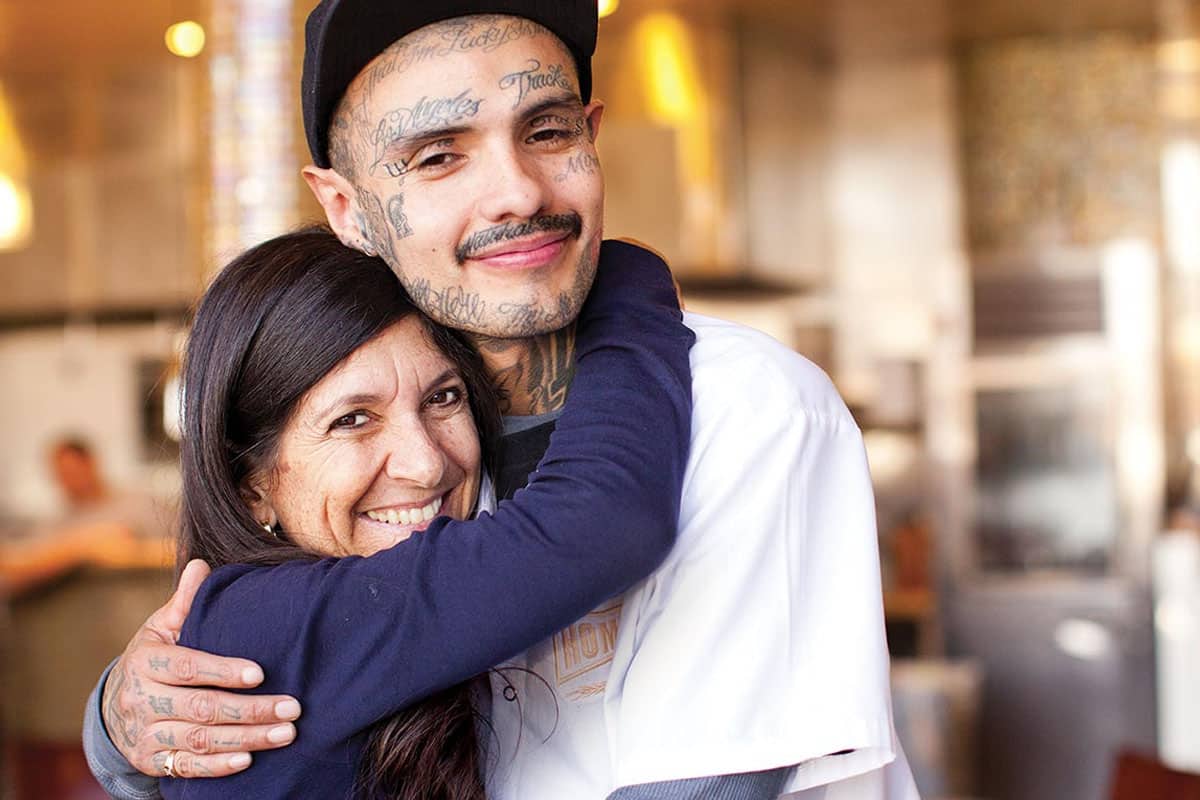 It is hard to imagine how women (or mothers) can stand living a gang lifestyle inside the circle of MS-13. For mothers who are not actually members of the gang but somehow affiliated with it because of their spouses, raising children in a home where they are constantly exposed to gangster’s behaviors is a monumental undertaking.

Raising a kid, even in perfectly normal home in a peaceful neighborhood is difficult already, let alone in a gang-related environment. There is always the worry of their children getting hurt, involved in violent crimes, drugs, or engaged in other risky behaviors.

Hundreds of mothers, living inside the confinement of MS-13 shadows, have lost their kids to gang-related crimes and violence. It is even more chilling to know that a lot of the gang-related violent deaths in young teenagers are caused by initiation process that went too far; sometimes the initiation also involves instances of beating just to see how tough the new recruits are. 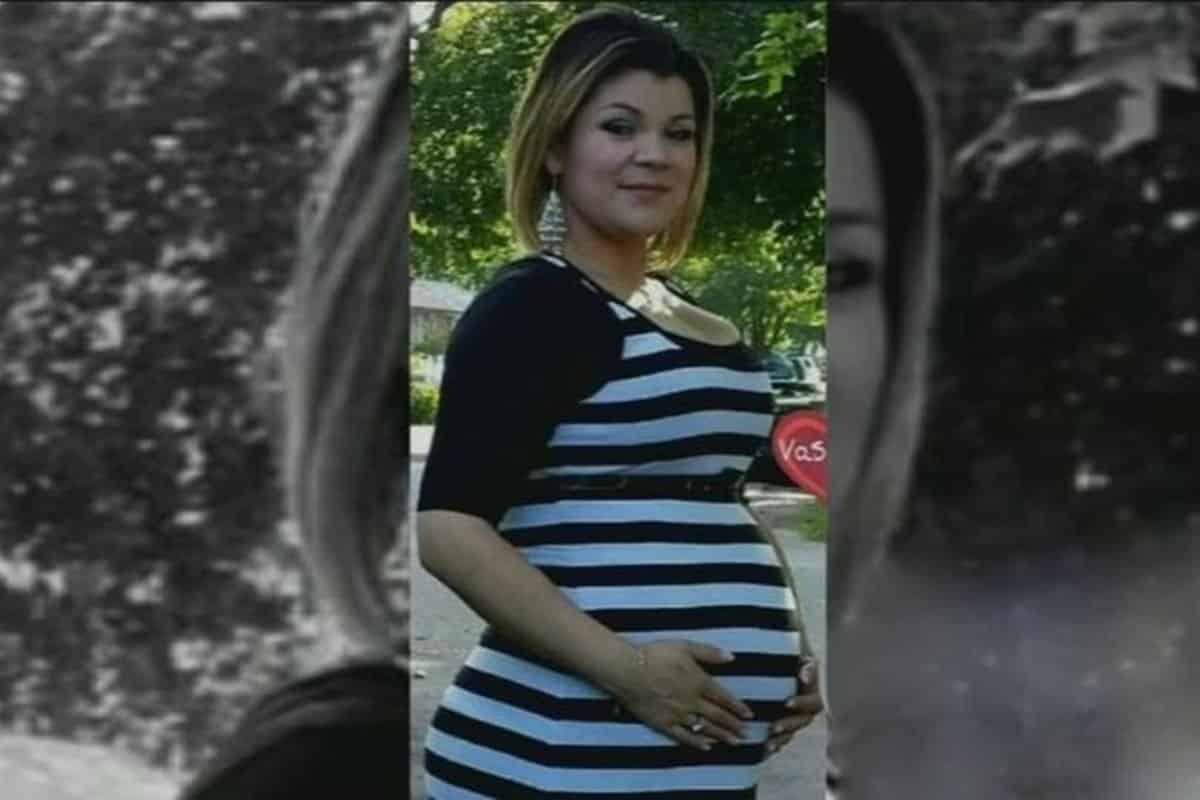 1 MS-13 Do Not Discriminate Victims

Any reasonable person would assume that even criminals would stay away from pregnant women; committing a violent crime against an expectant woman would be a crime gone too far beyond any imaginable measure. But this is not the way MS-13 or perhaps other violent gangs think.

In 2014, the body of Milagros Canjura was found dead. She was 31-years-old woman who at that time was also 7-month pregnant. She was apparently shot to death just outside her home. Her death was most likely a case of revenge killing, and MS-13 was known for having no hesitation in killing its enemies and families of enemies.

At that time, Canjura’s husband was in jail on murder charge in which the victim was another gang member.  It did not take long until yet another gang member to launch a revenge assault on his family. The results are the deaths of a woman and her unborn child.