by Factionary 6 months ago5 months ago
58.6Kviews

When it comes to taking on the most challenging roles, no one can beat Angelina Jolie at the game. She aces any and role, be it in her personal life or on the big screen.

Apart from her worldwide success in Hollywood, the gorgeous queen is also a mother of 6 children and serves as a Special Envoy of the United Nations.

The red carpet too is not proof against her glamour and spark. Jolie takes on new looks and makes them her own, teaching women far and wide how to entirely at ease in just about everything.

Her grace, poise, elegance, and beauty serve as role models over the world, but she is even more popular for her philanthropic works.

However, what we are completely obsessed about is how Jolie takes on each new look; whether it is her blonde bob or a buzz cut.

She depicts so much daring and sassiness with each look that everyone who beholds her has to struggle to remember to breathe.

While the actress makes us wait with bated breath to see what she has up her sleeves next, we are especially impressed with how she has recently embraced her natural brunette hair.

Natural though the look may be, there is however, no shortage of the glamorous aesthetic.

Let’s take a look at some of her most beautiful looks over the years. 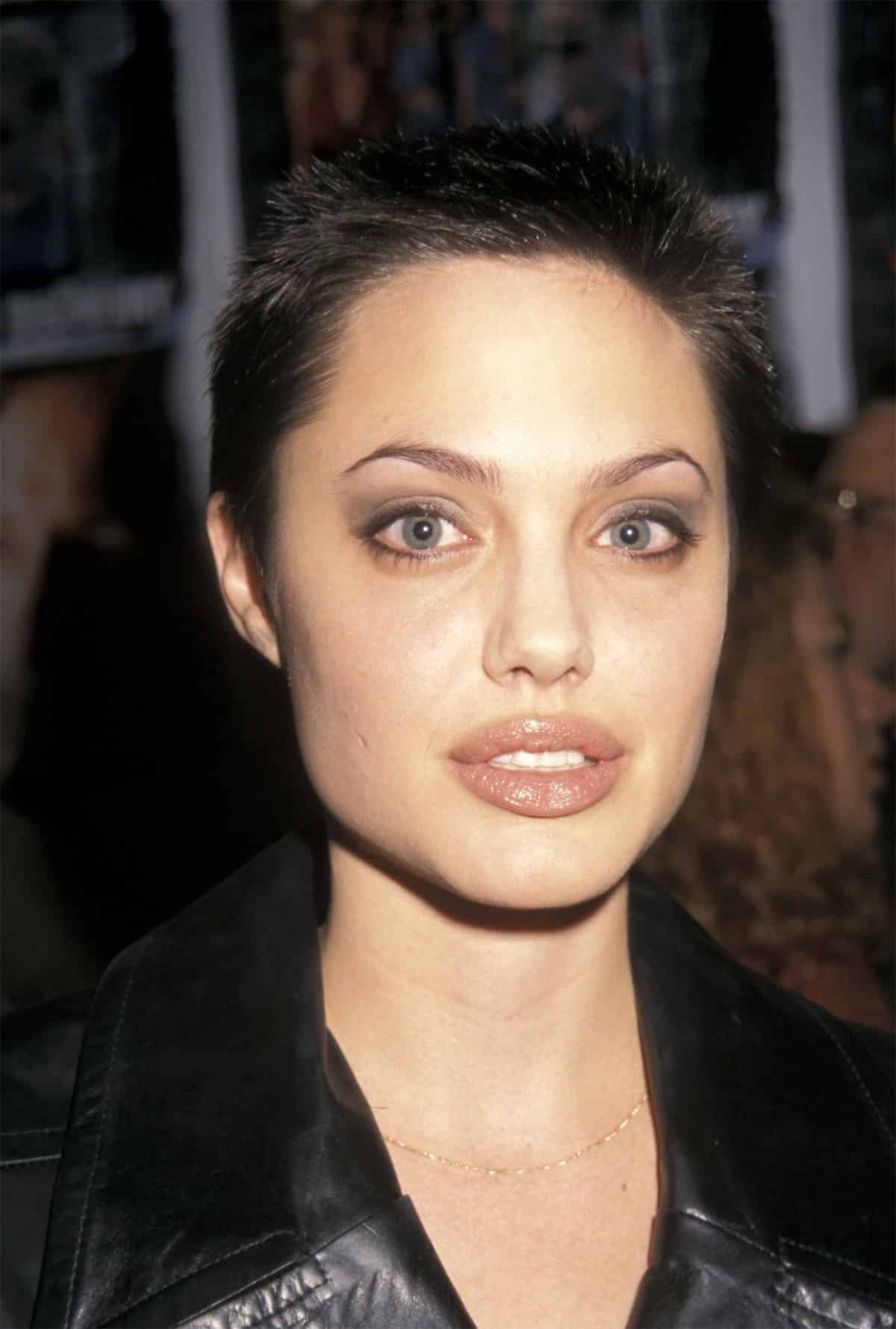 What would have been a very masculine cut looked utterly feminine and attractive on Jolie’s beautiful face. She went absolutely short with her hair at “Playing God in New York’s” premiere in 1997. 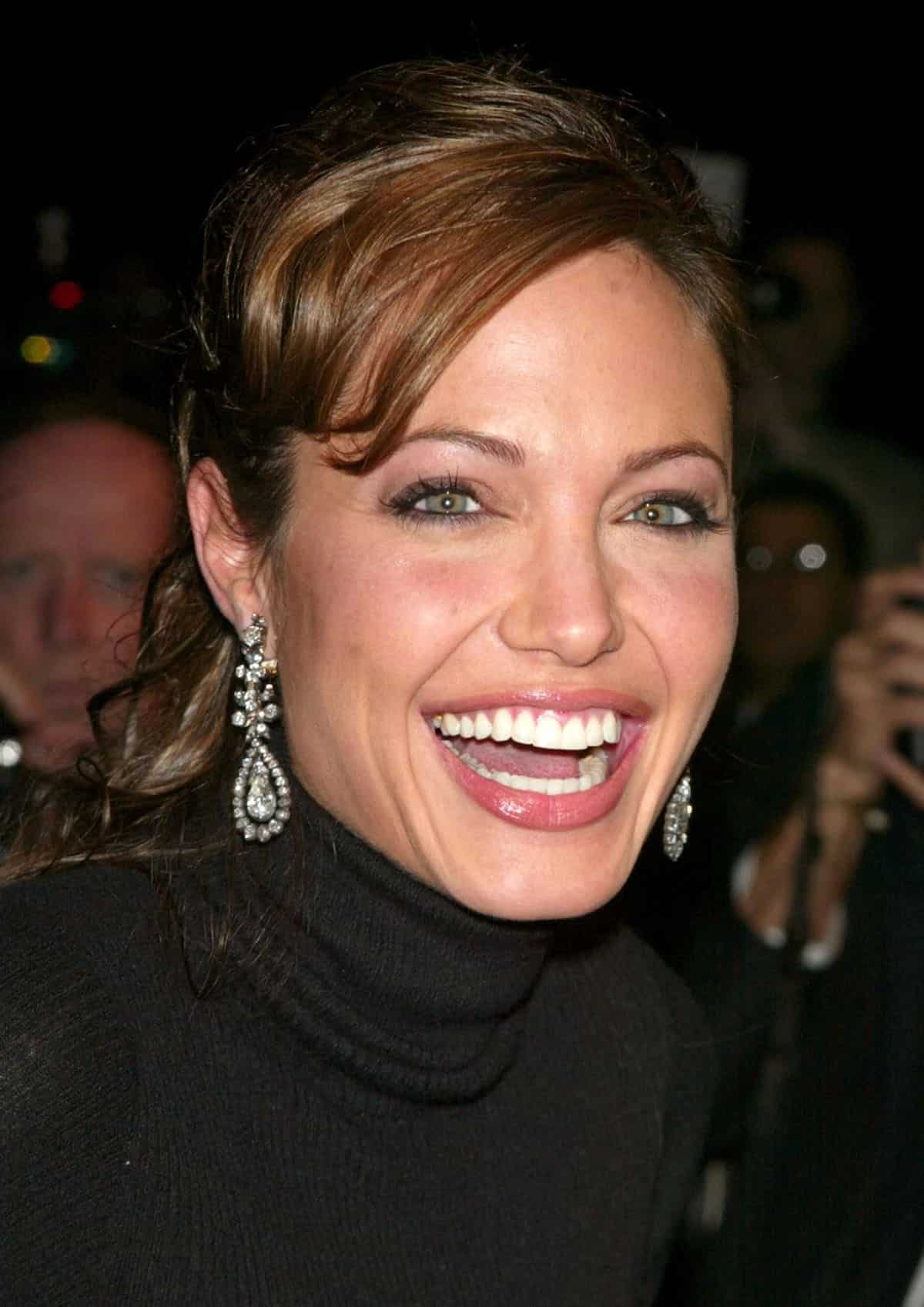 Jolie’s taste veered more towards the rust shades in July 2001. Here she is captured on camera while attending Original Sin’s premiere in Los Angeles. 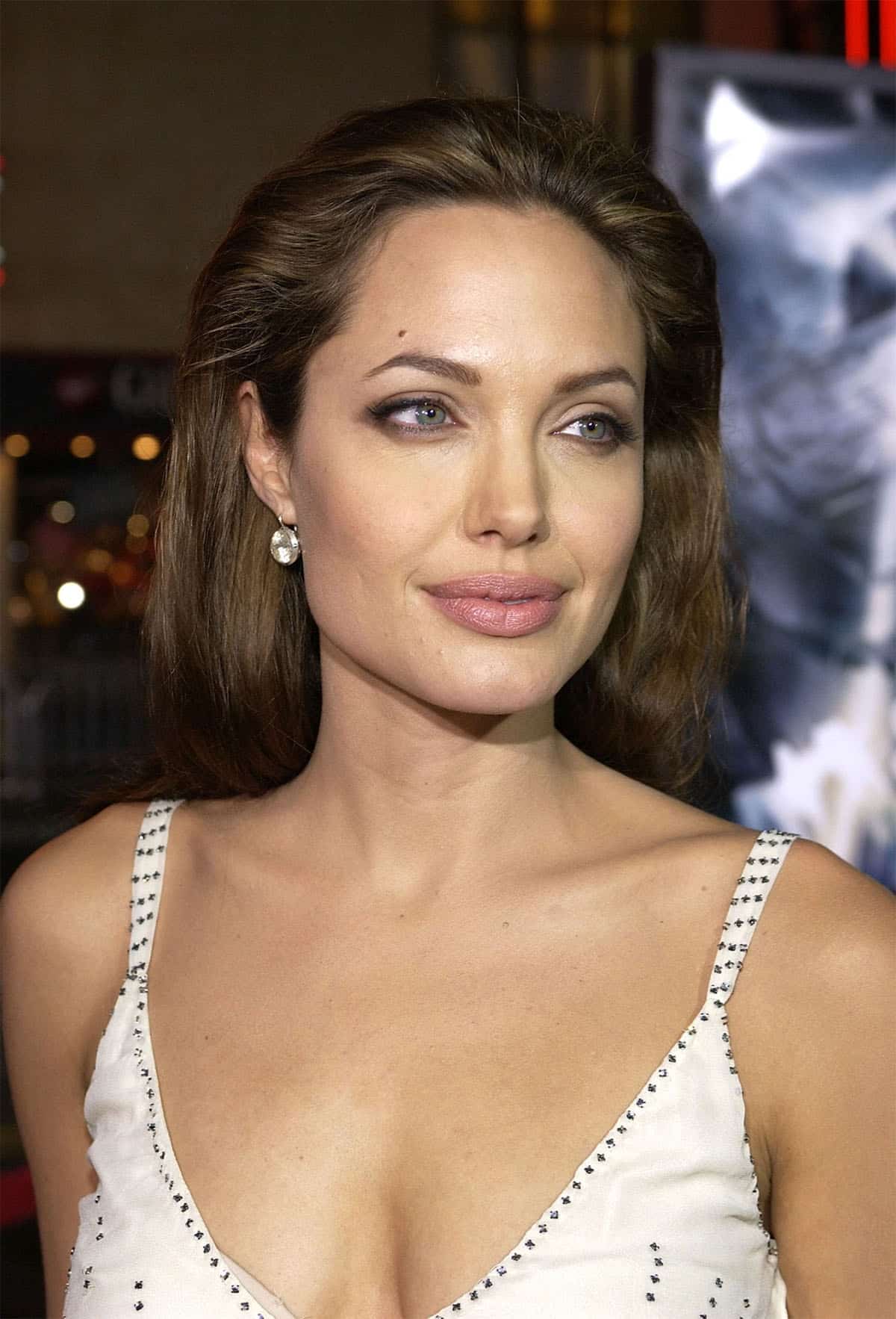 In 2004, Angelina dazzled not just with her smile but also with her brunette shades as she attended the premiere of movie Sky Captain and the World of Tomorrow. 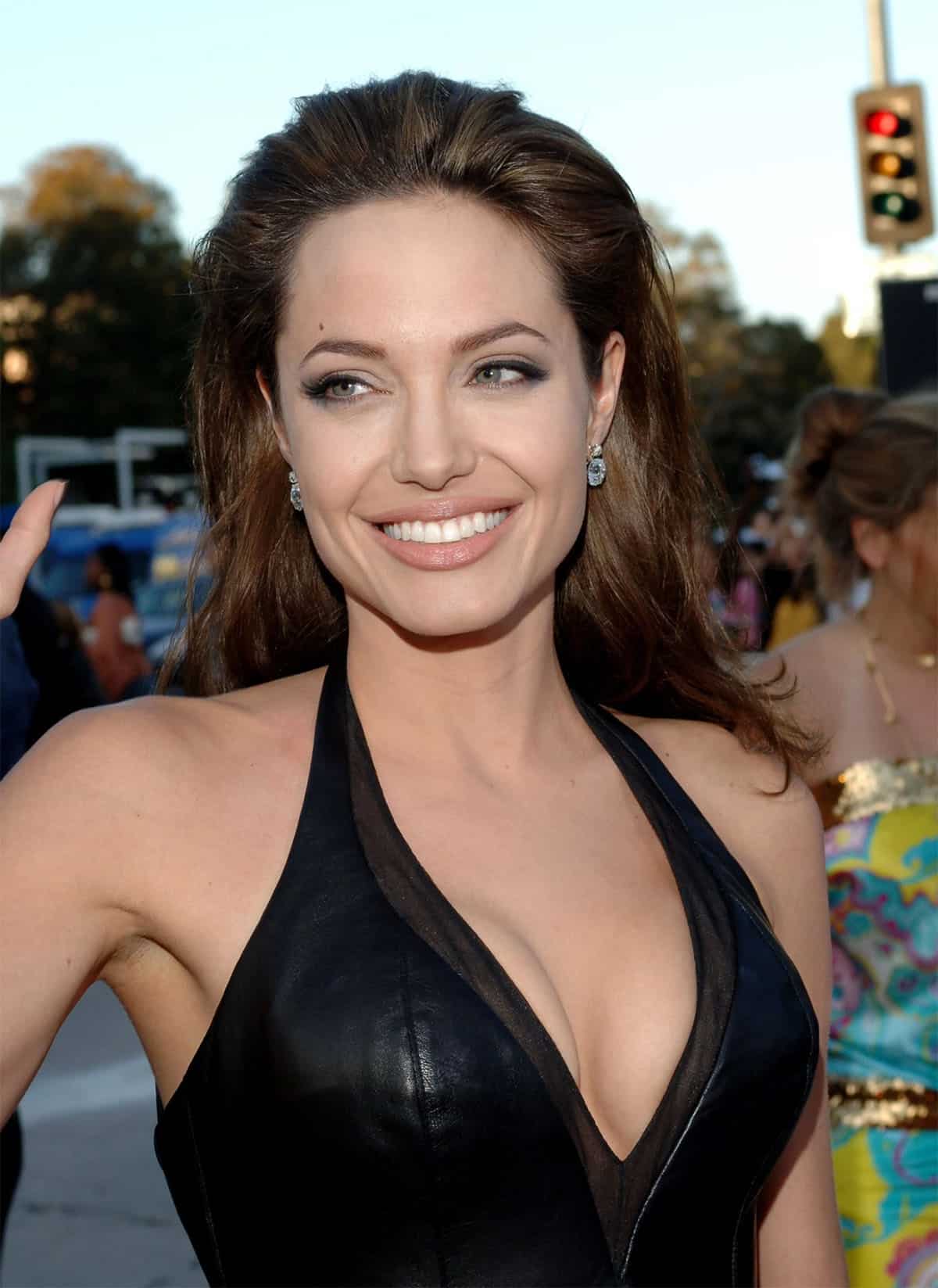 Angelina went back to being a brunette for the premiere of blockbuster Mr. and Mrs. Smith in June 2005, Los Angeles. We would never get tired of watching this film over and over again. 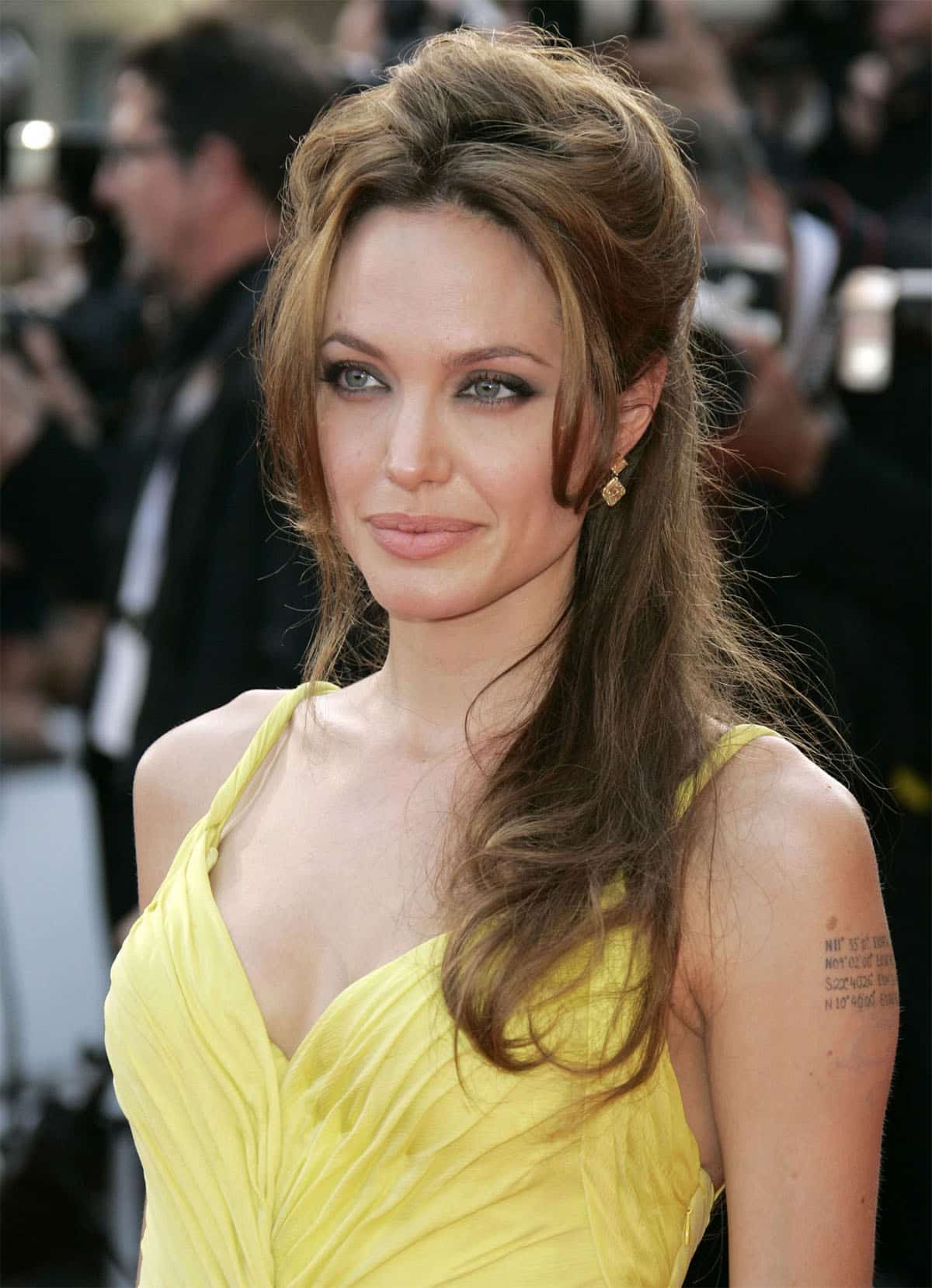 Even the sunshine looked dull compared to the radiance Jolie exuded at the Cannes Film Festival premiere of Ocean’s Thirteen in 2007. 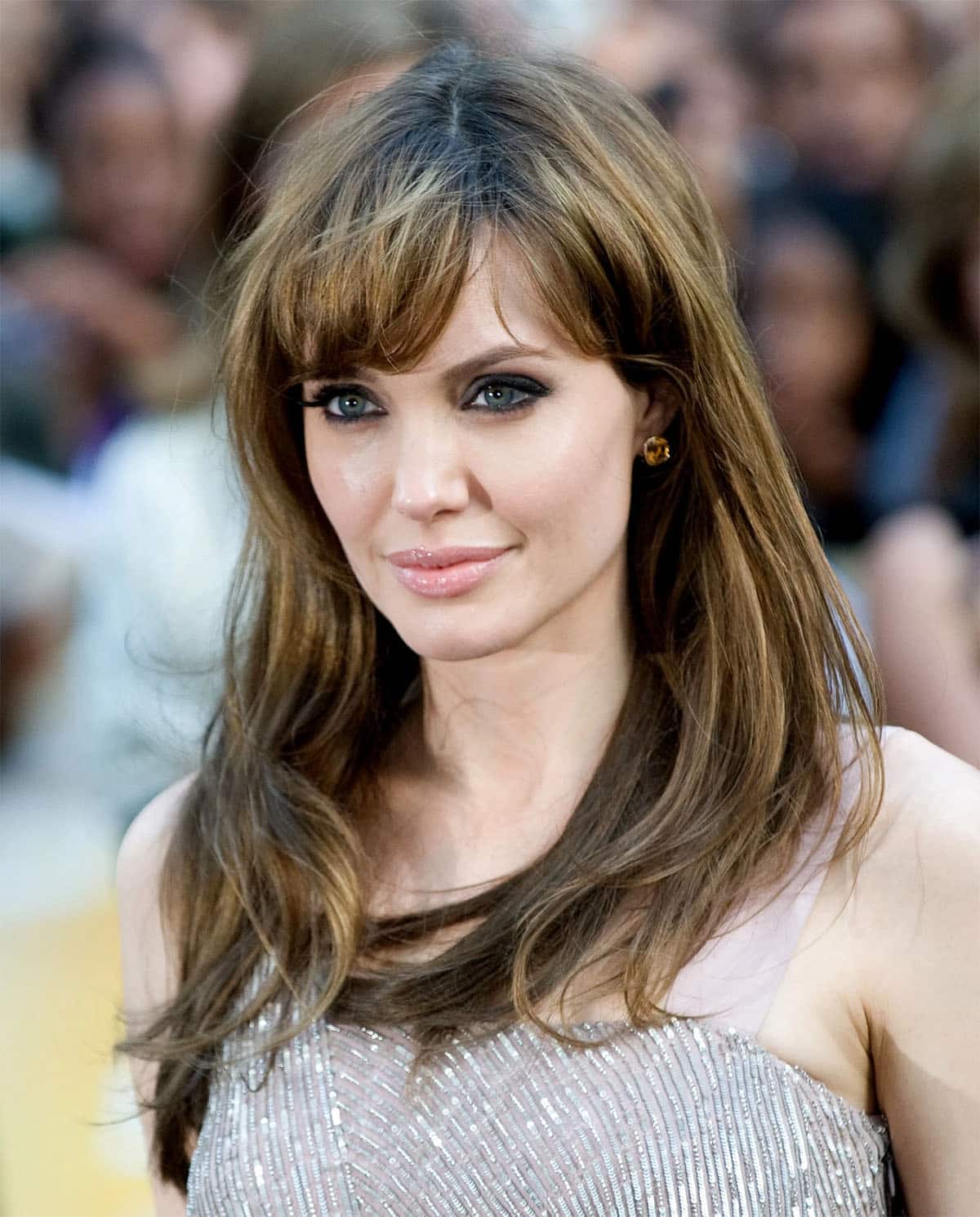 Angelina Jolie looked smoldering hot with bangs as she attends the premiere of Salt in London in August of 2010. 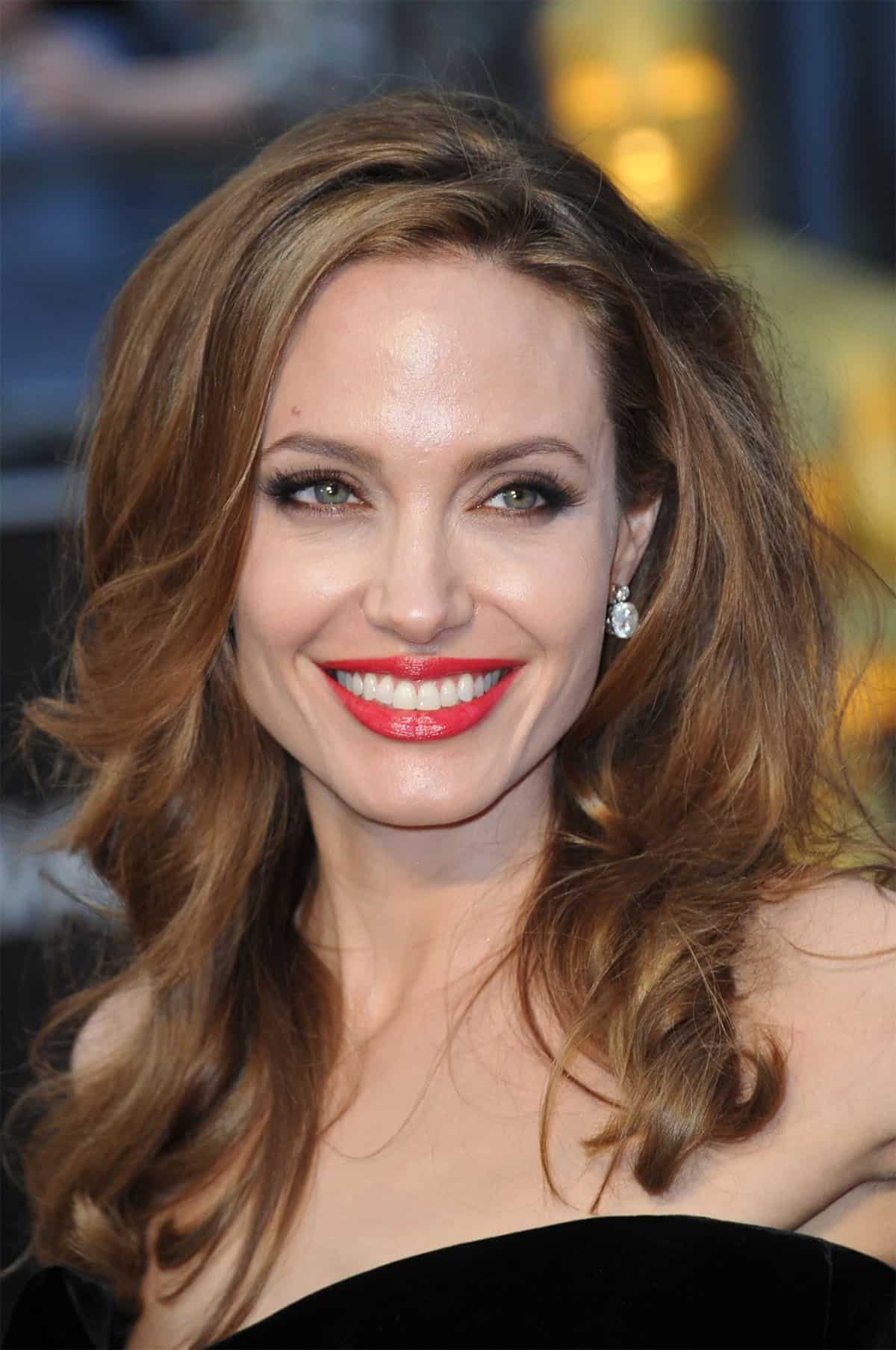 She melted our hearts with that dazzling smile and her gorgeous hair as Jolie attended the 84th annual Academy Awards. The picture was taken in February 2012 in Hollywood, California. 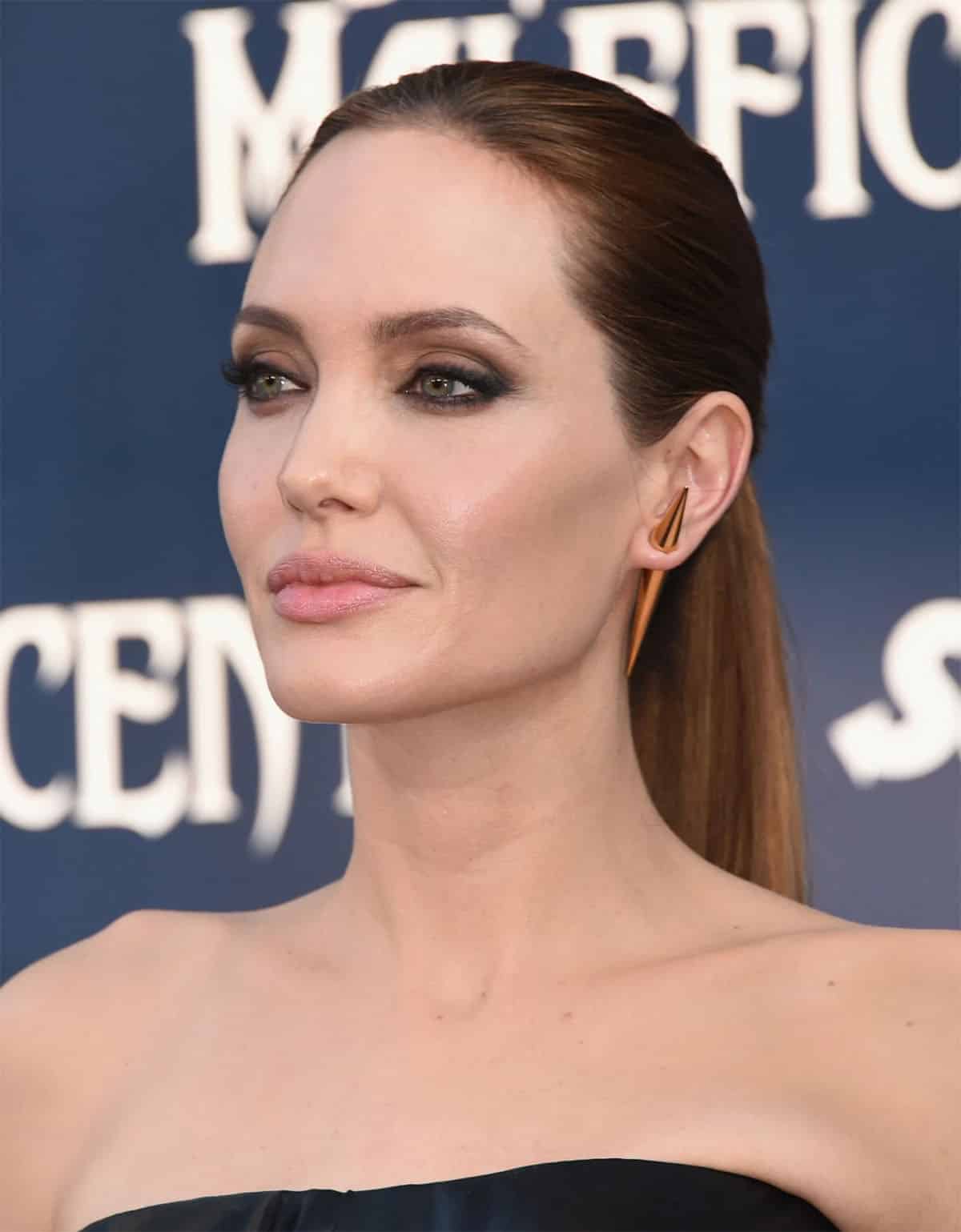 3 Glamorous In A Sleek Pull Back

Angelina looked utterly ravishing in a sleek ponytail and a black number as she posed for the cameras at Maleficent’s premiere. This is Jolie’s look from 2014. 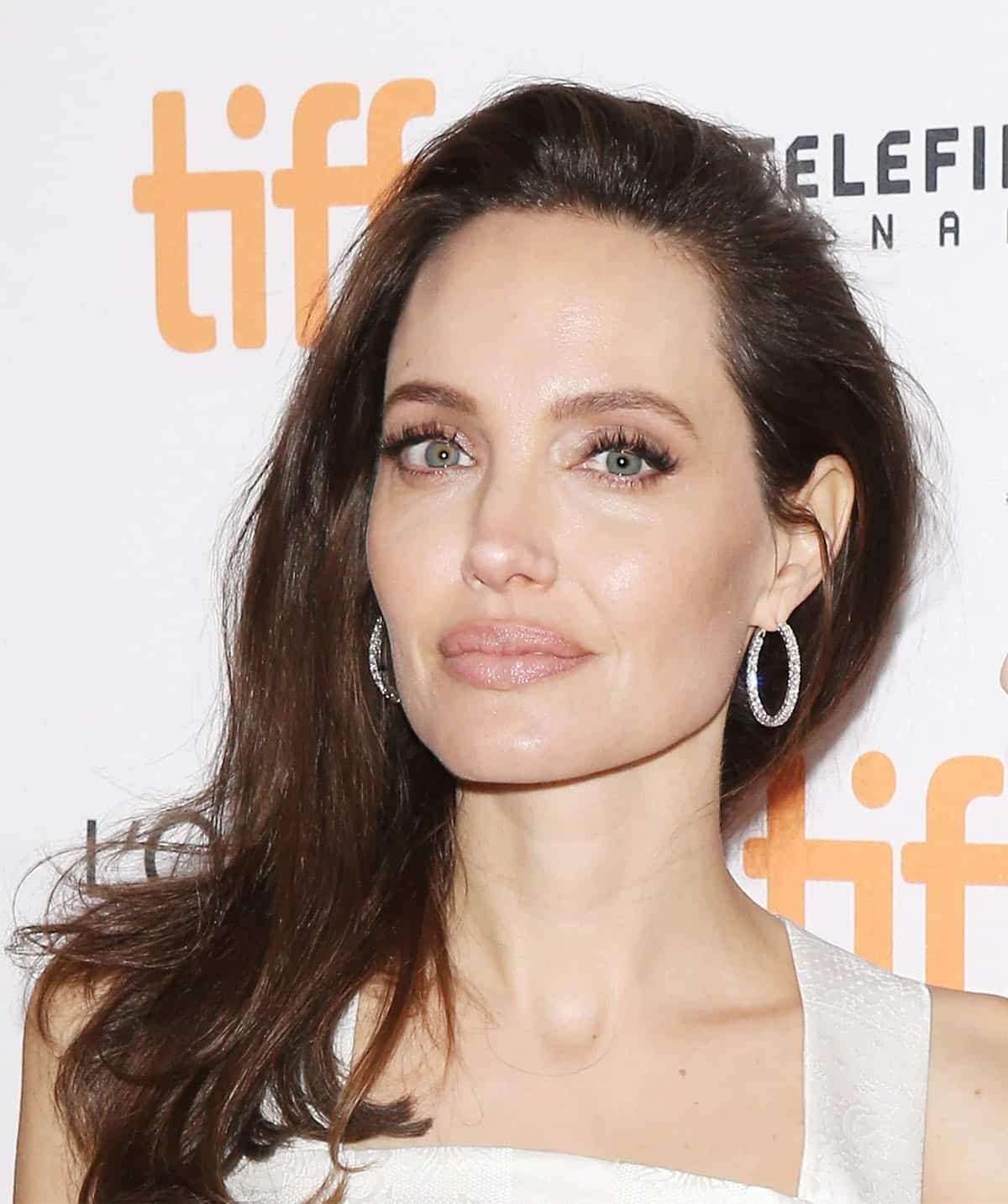 Angelina looked radiant and angelic in white at the premiere of The Breadwinner in 2017. The event took place in Toronto, Canada. 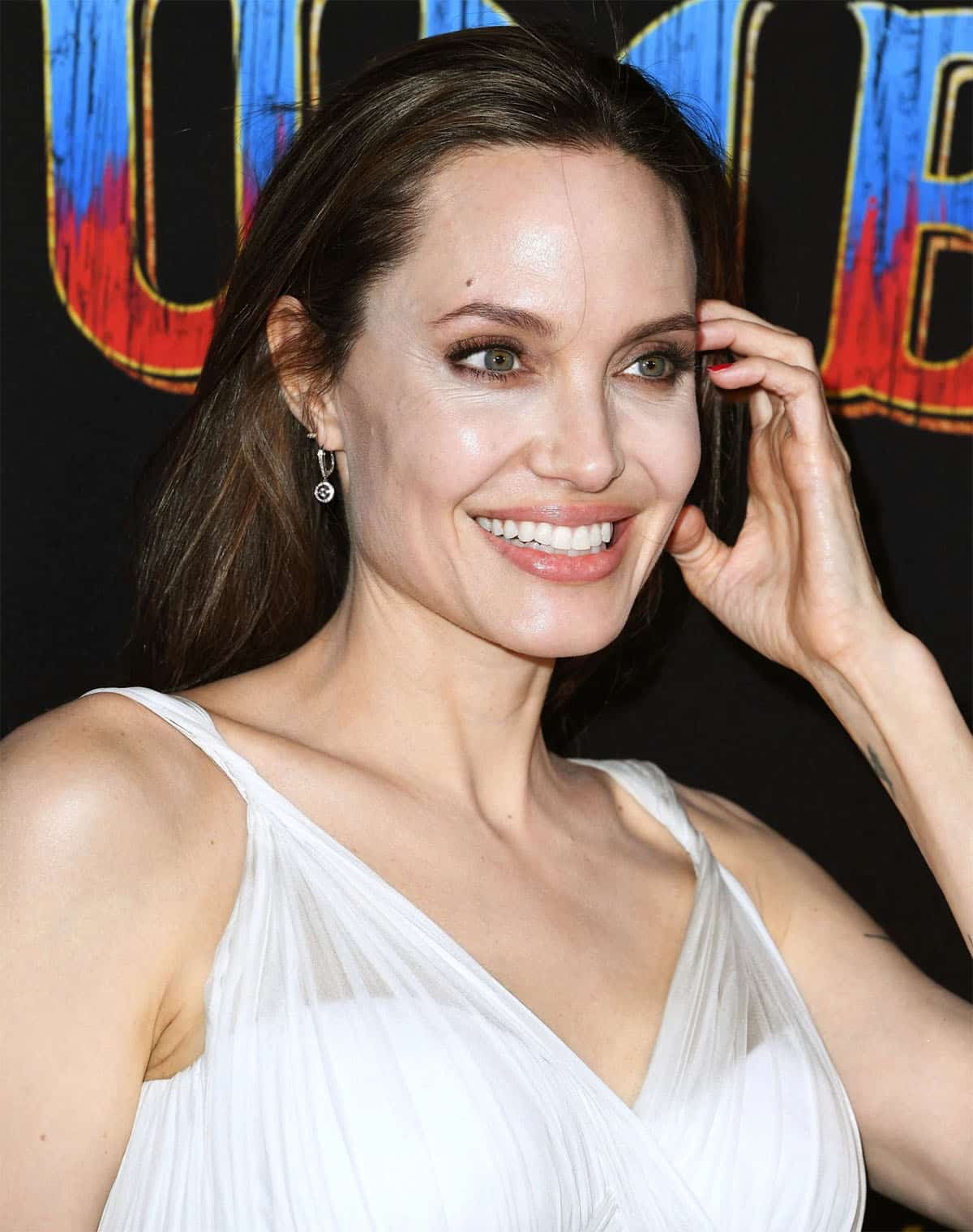 Jolie’s beauty only seems to be getting more ethereal with time. She attended Disney’s Dumbo premiere in Los Angeles on March 11, 2019.