by Factionary 9 months ago1 month ago
3.8Kviews

A duo of fishermen in Northern Ireland has found the skull and antlers of an ancient Irish Elk. The most interesting part about this find is that these species were not exclusively present in Ireland.

The historic catch by this lucky fishermen made waves all over the world and caused frenzy in online media.

How It All Happened

Raymond McElroy, who is a Northern Irish fisherman, was out fishing on Lough Neagh’s lakebed with his assistant Charlie Coyle. The depth of the shore was around 20 feet in depth.

In what seemed to be another regular fishing outing, things took a mysterious turn as Raymond reeled in something that was unlike anything he noticed in his usual catch.

The fisherman and assistant were shocked to find out that they hooked an enormous pair of elk skull and antlers.

Surprisingly, the skull and antlers were fully intact.

This discovery did not only shock these fishermen but scared them too.

The assistant even went on to say that he initially thought they stumbled upon the devil himself.

Not only was this discovery surrounded with mystery and questions, it was also quite historic as some renowned experts claimed that it was more than 10,000 years old.

What Is An Irish Elk?

Initially, no one had any idea which species these antlers and skulls belonged to.

However, after some research and tests experts discovered that they belonged to an ancient species called the Megalocerosgiganteus, also known as the Irish elk.

The antlers and skull measured around six feet, which gives a vivid idea of how gigantic these creatures were when they existed.

Some even claim that the Irish elk was perhaps the biggest deer species to exist and if we are to go by the strange occurrences that happen in this world, this could certainly be true.

Although the now extinct gigantic species did exist back in the day, they were not exclusively present in Ireland.

Plus, they are also categorized as deer and were present in different parts of Africa, Asia, and Europe when they were still around.

The reason why people call this species “Irish elk” is because its remains were mostly discovered in Irish bogs and lakes in comparison to other areas in the world.

What The Experts Are Saying

Various experts weighed in on this groundbreaking discovery. Renowned paleontologist Mike Simms from Belfast’s Ulster Museum claimed that, this particular species of deer used to live in the grass plains of Ireland.

The weather over there was most suitable for them. Mike also went on to say that this newly discovered elk skull was perhaps the biggest and best one he saw in two decades. 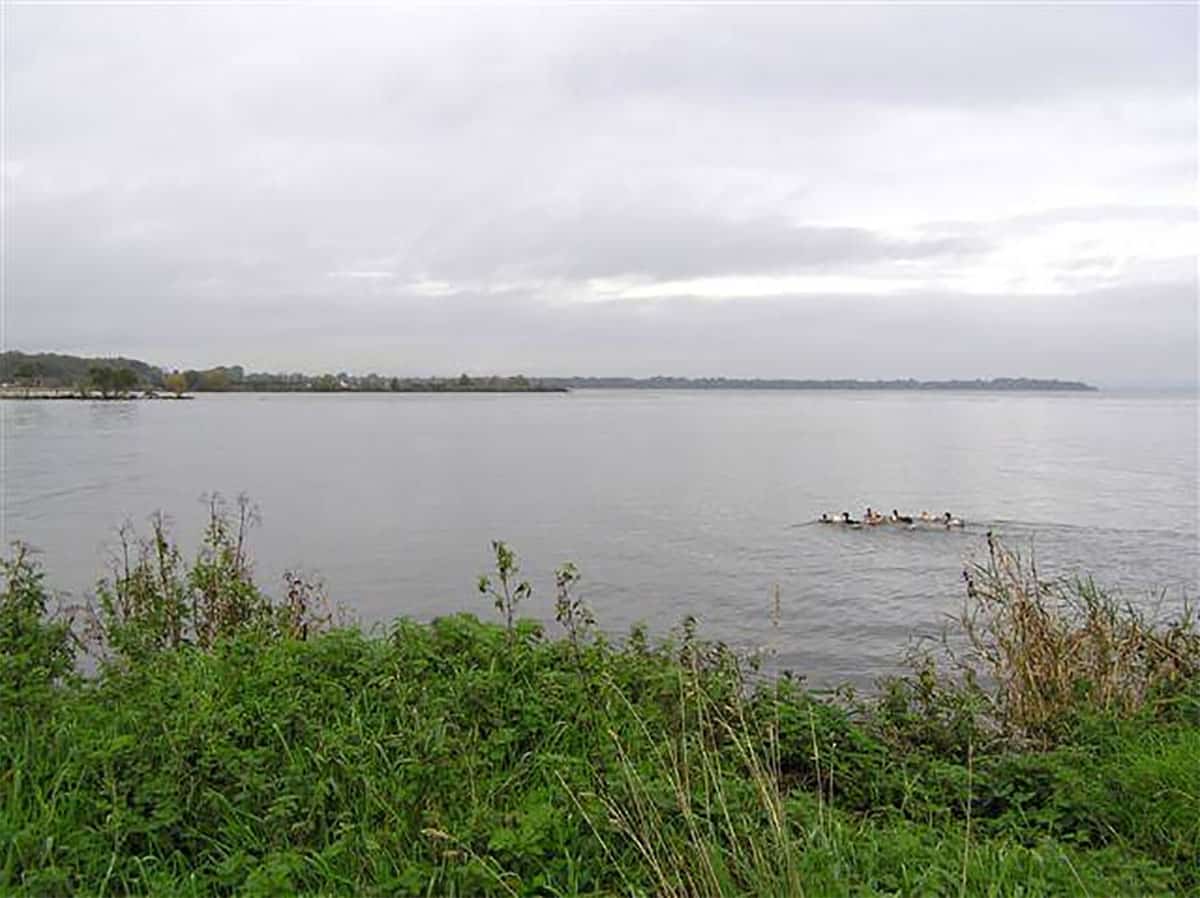 Why They Went Extinct

As the forests started to grow, the massive antlers of these species made it difficult for them to roam compact areas with ease. This made them shift to open plains where they could roam easily.

Changes in the environment were ultimately the reason why the great “Irish elk” went extinct.

Living in forests offered the elks protection from environmental hazards but shifting to open plains meant that they were more exposed to these hazards, which ultimately caused their sad demise.

The discovery by Raymond was not the only one made in Ireland. Another fisherman, Felix Conlon found a similar pair of antlers connected to a skull in 1987.

It was not as big as the one found by Raymond, but was a surprising discovery nonetheless.  Felix gave the skull to a school in his local community where it was displayed to students.

Lough Neal has proven to be a fruitful destination for elk related discoveries as Martin Kelly, another Irish fisherman found an Irish Elk’s lower jaw bone in 2014. Experts estimated that this jawbone was around 14,000 years old.

It led people to believe that this jawbone could belong to the elk skull and antlers found by Raymond McElroy and Charlie Coyle.

Even McElroy himself believed that the jawbone that Martin discovered could well and truly belong to his Irish elk skull. However, experts did not confirm this theory.

Another person discovered a jawbone belonging to an Irish elk in 2014. This time the discoverer was Kenneth James, a curator in Belfast’s Ulster Museum.

He discovered this jawbone quite close to the spot where the Raymond found the antlers and skull. Raymond decided to store this skull in his garage as he hopes that experts examine it closely.

Irish elk discoveries are the gift that keeps on giving. During the 18th and 19th centuries, numerous scientists firmly believed that it was impossible for animals to go extinct. 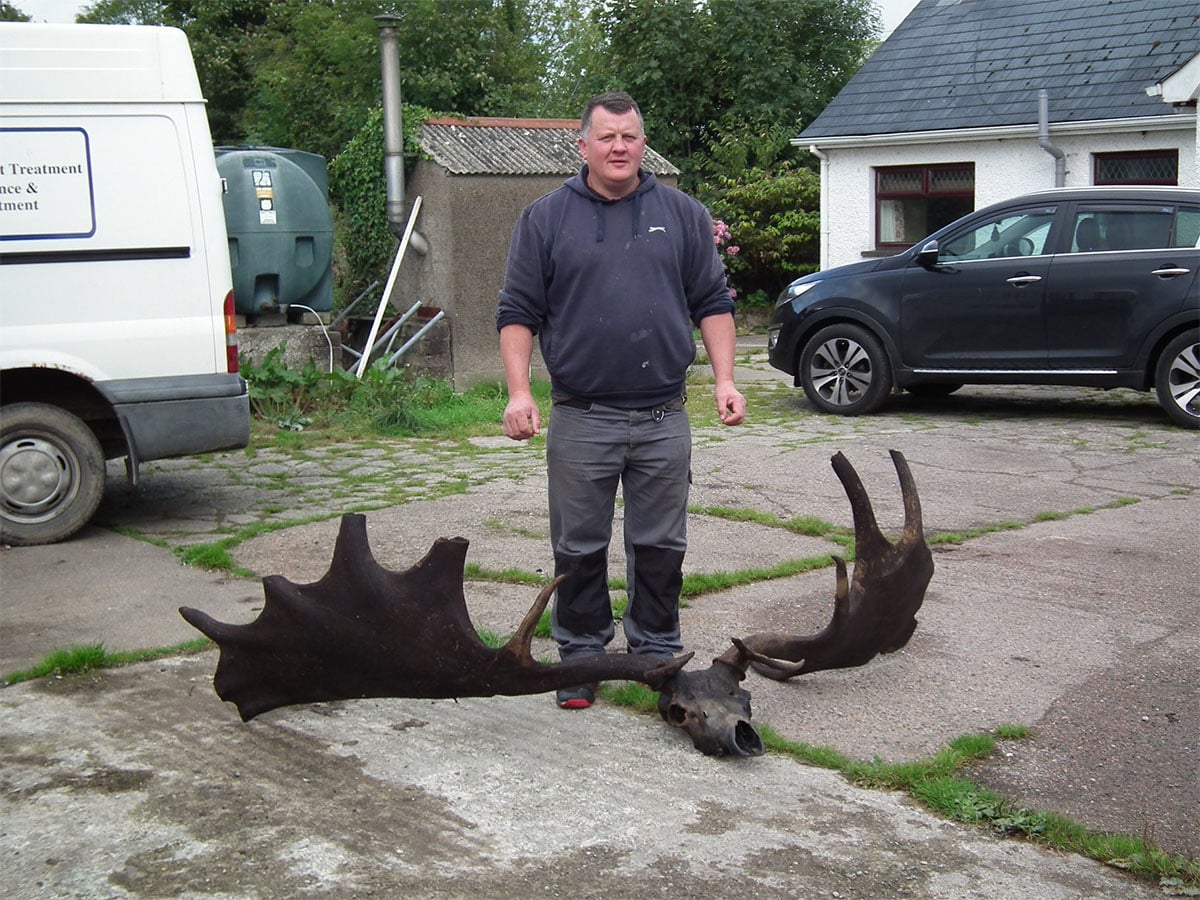 They thought that fossils were simply animal remains that explorers eventually discovered somewhere hidden beneath the ground.

George Cuvier, a scientist from France was used the Great elk’s remains to show that the extinction is in fact possible and did take place.

The Antlers Served A Purpose

There aren’t any pictures to show what Irish elks looked like but that did not stop anyone from creating depictions for what the creature could have looked like.

Most depictions and studies believe that the Irish elks were taller than 7 feet.

The male elks had wide antlers which are thought to be more than 10 feet wide.

The reason behind the antlers was perhaps sexual selection.

The antlers were not there for show; they likely attracted females and intimidated rivals as the Museum of Paleontology in California claims.

Could There Be More?

With so many interesting discoveries through the years, it would be fair to expect stranger twists and turns down the lines.

Since the recent discoveries, people in Northern Ireland have shown a lot of enthusiasm in unearthing more remains.

Suffice to say, there hasn’t been a boring moment with these discoveries.