by Factionary 3 months ago2 months ago
46.6Kviews

George Stinney Jr. was a fourteen-year-old boy when police officers arrested him for a crime he did not commit. Unfortunately, the judges sentenced him to death by electric chair, making him the youngest person to receive the United States’ death penalty.

The circumstances that led to this predicament are quite strange and sometimes vague. It is a significant reason why people talk about George Stinney’s case.

George Stinney was an African American boy who lived in Alcolu, South Carolina. Railroad tracks separated the white community from the blacks. 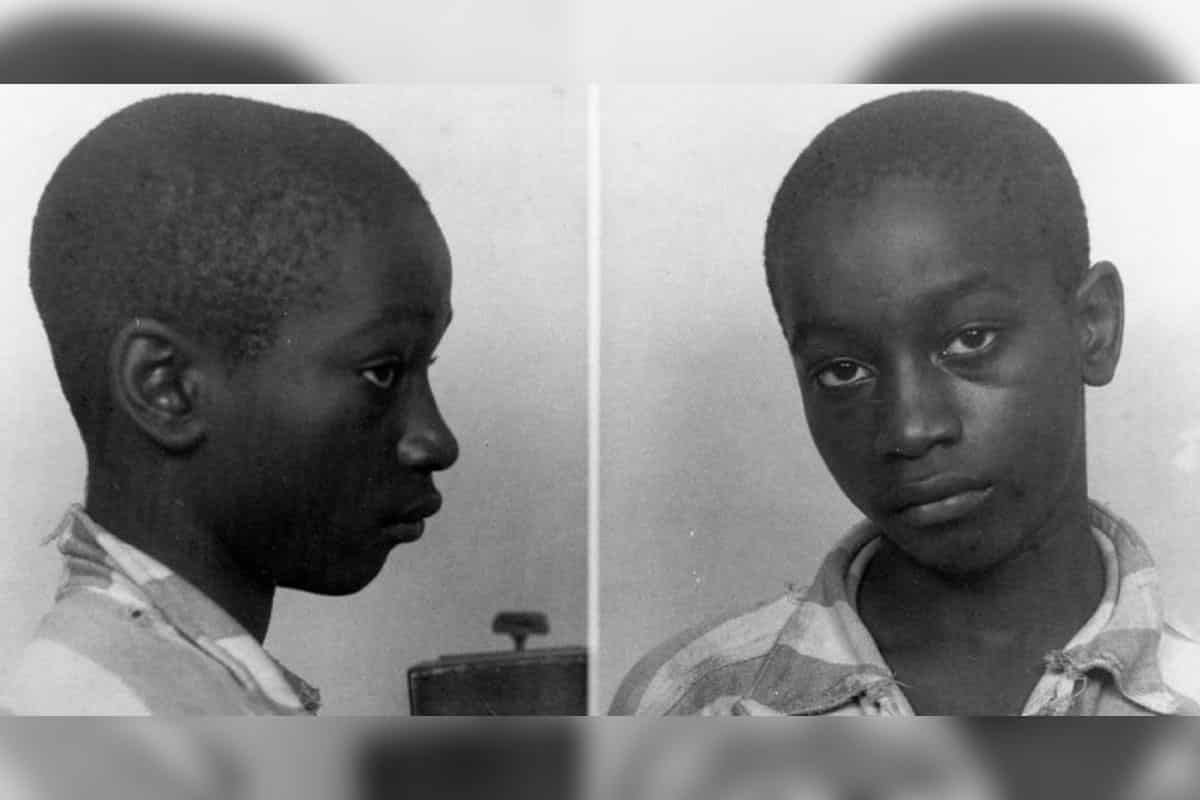 Stinney belonged to a lower-middle-class family residing in the Alcolu community.

Authorities forced them to vacate their house after somebody accused the teenager of murdering two white girls.

Racial discrimination was quite prevalent during that time across the globe, particularly in the United States.

Most people held prejudice against dark-skinned people, so it did not take long for the judges and jury to find George guilty.

Police officers arrested the boy within minutes of the accusation. What’s worse, the jury present in the court consisted of white men only. It highlights the high-degree of racial injustice in America.

The Murders Of Mary Emma Thames And June Binnicker

One day during March 1944, Mary and June were riding their new bicycles, searching for fresh flowers. They crossed paths with Stinney and his sister Aime.

The girls stopped to ask them where they could find maypops. According to several reports, that was the last time anyone saw the June and Mary alive.

They never returned home, and their disappearance caused their parents and virtually everybody residing in Alcolu to search for them aggressively. George’s father also actively tried to find the girls. Everybody’s efforts were unsuccessful.

Sadly, the only thing that returned the next day were the missing girls’ corpses. Somebody stumbled upon them in a ditch and immediately alerted the authorities. Police officers sent the bodies to an examiner. Initially, the Doctor analyzing the dead body didn’t notice any signs of struggle.

However, closer inspection revealed that both girls had multiple head injuries and fractures, indicating that someone violently murdered them.

Thames’ forehead had a massive hole alongside a deep cut near her eyebrows. Her friend Binnicker suffered multiple blows to the head and ribs.

The examiner later stated that the murderer crushed her skull to pieces. Experts concluded a massive and round instrument was responsible for the injuries sustained by Thames and Binnicker.

Some people speculated that the girls stopped at a well-recognized white family in the Alcolu community before their disappearance, although nobody confirmed these claims.

Furthermore, the police were swift to rule out a while murderer. It seemed as if they wanted to arrest a dark-skinned perpetrator even if it meant they had to accuse someone falsely. 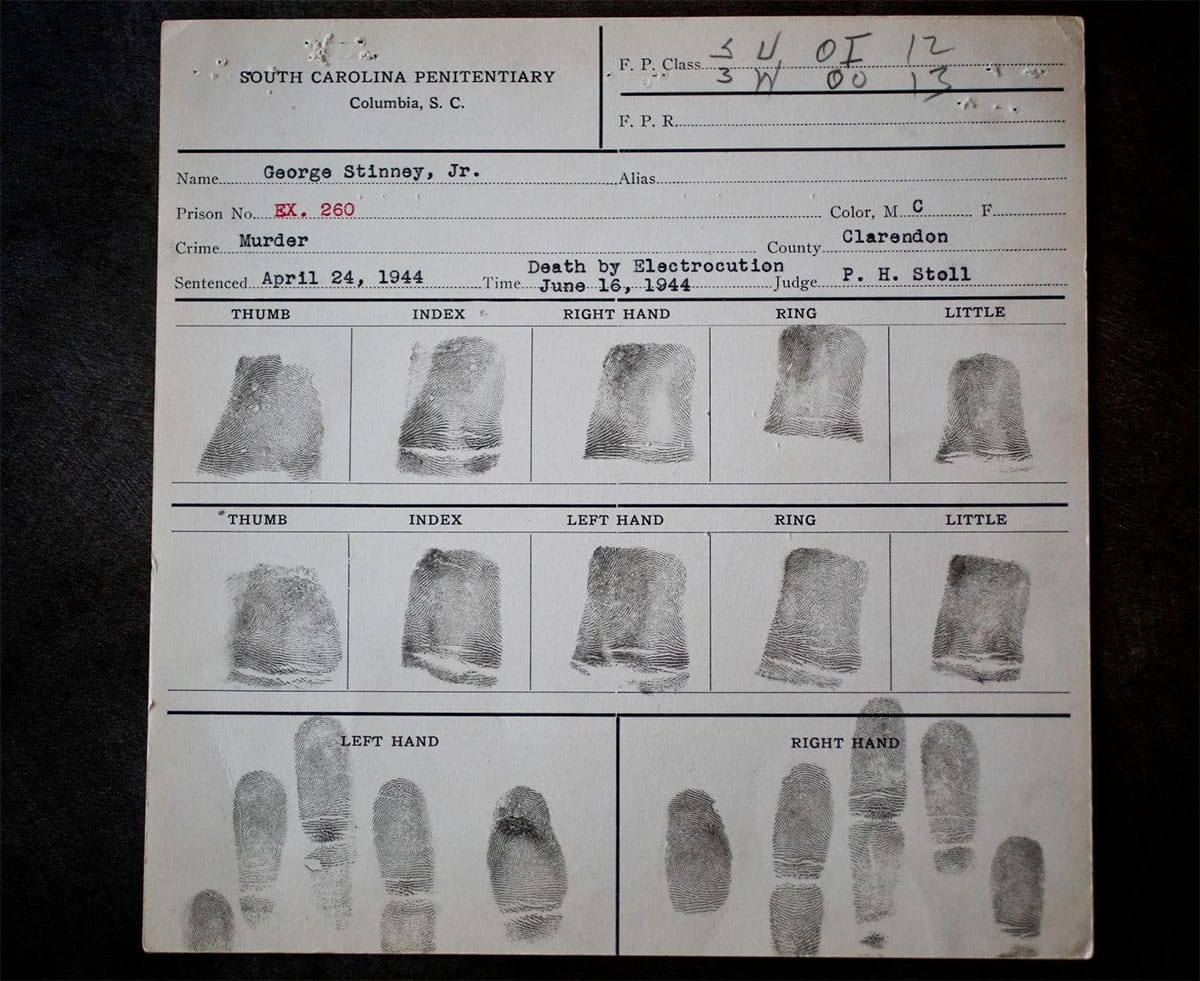 Someone told them that the girls talked to George Stinney and his younger sister, after which they followed them to their homes. The officers quickly arrived at the boy’s house to arrest him.

They handcuffed George and interrogated him inside a small room for several hours. What’s worse, the police officers did not let the boy’s parents speak with him. They did not provide George an attorney either.

Most would say that the officers were setting the fourteen-year-old boy up to take the fall. The boy pleaded his innocence, but the officers wouldn’t listen. They would use various intimidation tactics to make him confess.

Nobody knows what happened during the interrogation, but one of the officers stated that Stinney confessed to killing Thames and Binnicker.

He also noted that the boy murdered them after his plant to have sexual intercourse with the girls fell apart. H.S Newman provided his higher-ups a handwritten statement that provided details regarding George Stinney’s confession.

It provided gory information regarding how he murdered the children. Hundreds of people came to defend Stinney, but the authorities refused to inform them about where they were detaining the boy.

Officers tried to justify these actions by claiming that people would lynch George to death. During those days, society used to consider fourteen as the age of responsibility. So, the police believed George to be responsible for the killing of Thames and Binnicker.

George Stinney spent thirty to forty days in prison, after which he stood trial a courthouse in Clarendon County. The court provided the fourteen-year-old boy with an attorney, but he did nothing to defend him.

He made deliberate errors throughout the two-hour trial, where he also did not present evidence or called witnesses.

The only piece of evidence that officers presented against George was his supposed confession. However, the single written record that detailed his admission to guilt came from the arresting officer.

Several people speculated that he either coerced the confession or provided the details up by himself. 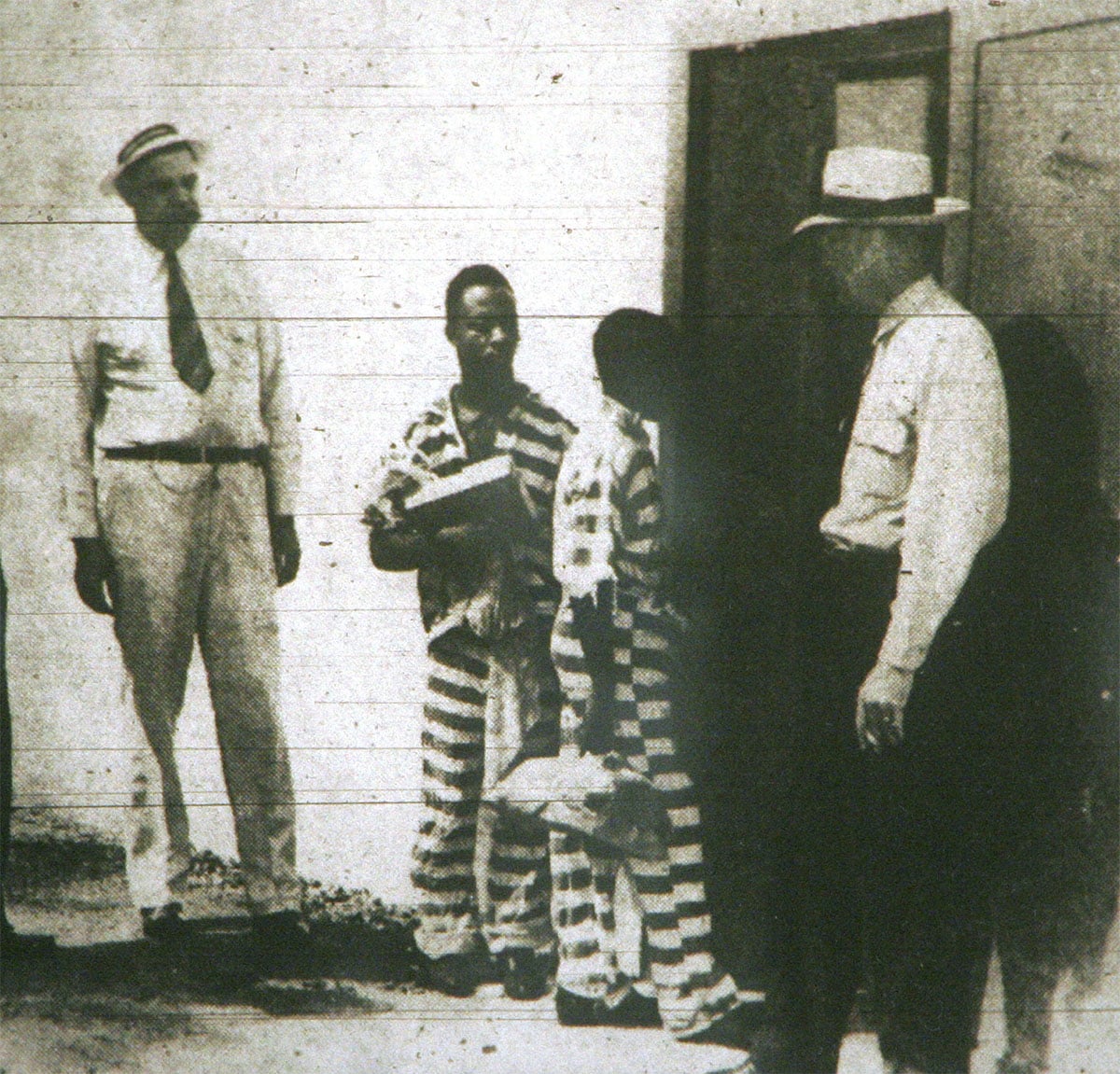 What makes this predicament sadder is that George had not seen his parents since getting arrested. They failed to appear at the courthouse as they feared a white mob would attack them.

There were fifteen hundred people inside the courtroom, and each of them was against the fourteen-year-old-boy. The all-white jury found George guilty of murder and sentenced him to the electric chair.

Thousands of individuals from black and white communities created petitions to save the boy from being executed.

However, Government officials did not grant the boy clemency despite his young age. George walked inside an execution chamber at the South Carolina Penitentiary.

He was firmly holding a Bible in his hands. The boy only weighed around ninety pounds and was wearing a loose-fitting jumpsuit.

Officers strapped Stinney to an electric chair. They struggled to adjust the electrodes and helmet to his body because of his small stature.

Stinney did not have any last words. The jail’s assistant captain asked him twice, and both times his reply was “no sir.” Three jolts of electricity killed the fourteen-year-old boy.

Witnesses saw his terrified face after his mask slipped after the first jolt. Within eighty days, officials charged George Stinney with murder and executed him.

It is a harrowing tale that highlights the racial injustice prevailing in America during that period.