Locals living near Canada’s Knight Inlet have noticed a decrease in the number of salmon making their annual trip to spawn in the rivers.

As a result, the grizzly bears are getting scrawnier and, alarmingly, much more aggressive.

Sadly, for the bears and the tourists who come to watch them feeding, the stocks of salmon have been steadily dropping. 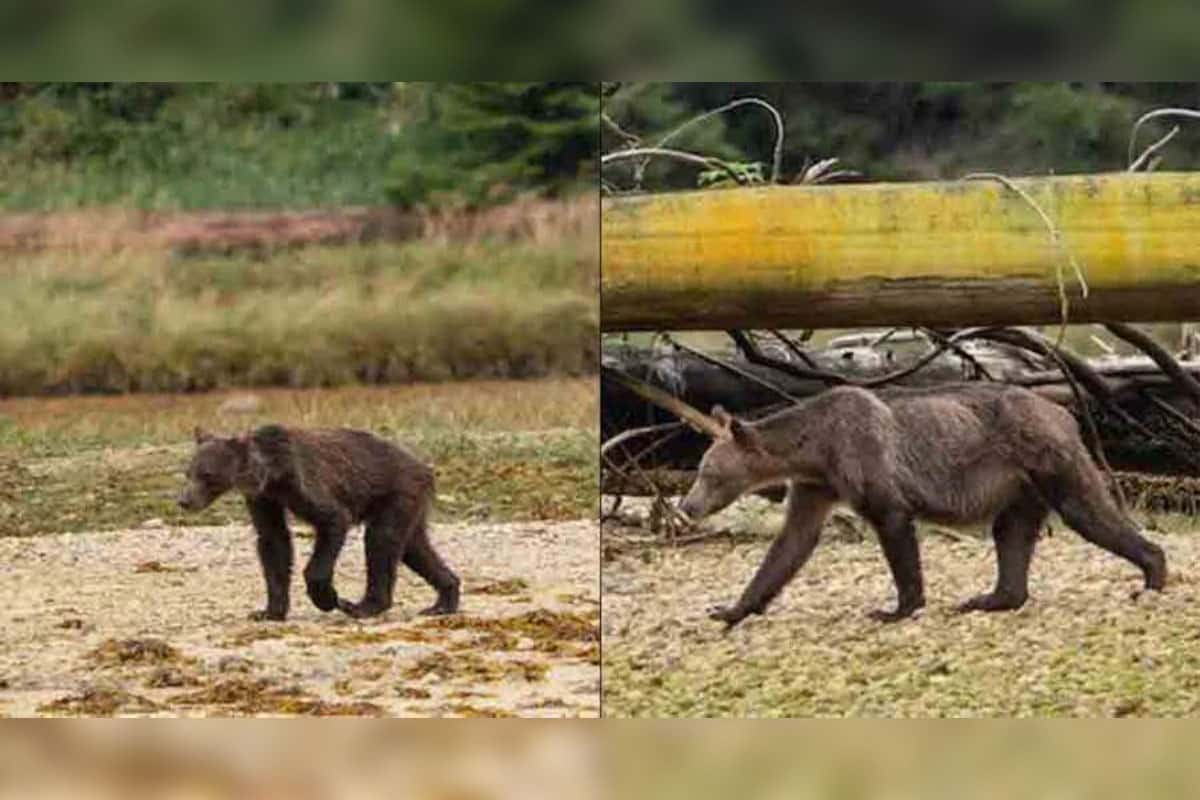 The problems of salmon farming have been an ongoing worry.

Scientists have been researching for many years and the damage it causes to the environment is extensively documented.

There are concerns about the spreading of parasites, pesticide pollution, and thousands of tons of waste being swept back into the ocean.

Another huge concern is the possibility of farmed fish escaping from the confines of the nets and contaminating the gene pool of wild salmon.

The impact on the salmon spawning grounds is already apparent.

This substantial drop is leading to a conflict between the needs of the bears and the livelihood of the local fishermen.

As concerns were growing about the sustainability of the indigenous grizzly bears, an association called Mamalilikulla First Nation initiated a salmon feeding campaign.

They aimed to ensure that the bears got enough nourishment to meet their dietary needs.

This basically means that they need to consume large amounts of fatty fish over the summer months.

This is vital for the survival of the bears during their long winter hibernation.

For many years the Mamalilikulla tribe has been monitoring the wellbeing of the bears in Hoeya Sound and Lull Bay.

They have reported that there has been a noticeable and acute deterioration in the health of the bears.

They have recorded an unprecedented amount of emaciated bears urgently needing food.

Their spokesperson, Jake Smith, from Mamalilikulla First Nation, told CNN that he fears for the future of the bears if this trend continues.

I Must Tell The Truth

His fears are supported by the distressing photos taken by Rolf Hicker, a wildlife photographer.

He captured a starving mama bear with her cubs and wrote, “I have no idea how she would make it through the winter without salmon,” in his posting on Instagram.

Rolf Hicker is passionate about wildlife and he believes he has a responsibility to show the wretched truth of the situation.

Usually, his beautiful photography is awe-inspiring.

He would, obviously, prefer to record the beauty of these amazing animals in their natural environment.

However, at this time, his photographs are providing evidence of the devastating effects of the significant reduction in their natural food supply.

This photo shows an extreme example of the hunger being experienced by the bears and it is heart-breaking to see their suffering.

A local tribe has taken matters into their own hands and organized for volunteers to distribute 500 Pink salmon to the bears so that they can supplement the meagre amount of natural salmon that are currently available.

These fish had been kindly donated by the A-Tlegay Fisheries Society on Vancouver Island, which is a favorite hunting ground for bears.

They seemed to be delighted with their free lunch.

Not everyone is a fan of this benevolent solution to the bears’ lack of food.

Ernest Alfred, of the Namgis First Nation, expressed his concern about the initiative.

His reservations stem from the fact that nothing like this has been done before.

Many of the inhabitants are afraid of the consequences for the bears and their future.

“I am quite conflicted because I’m a big believer in just letting nature take its course,” Ernest announced.

An alarming side-effect of the decrease in salmon stocks is the change in the behavior of the bears.

As they have become hungrier, they have also become more aggressive and have assumed survival mode. 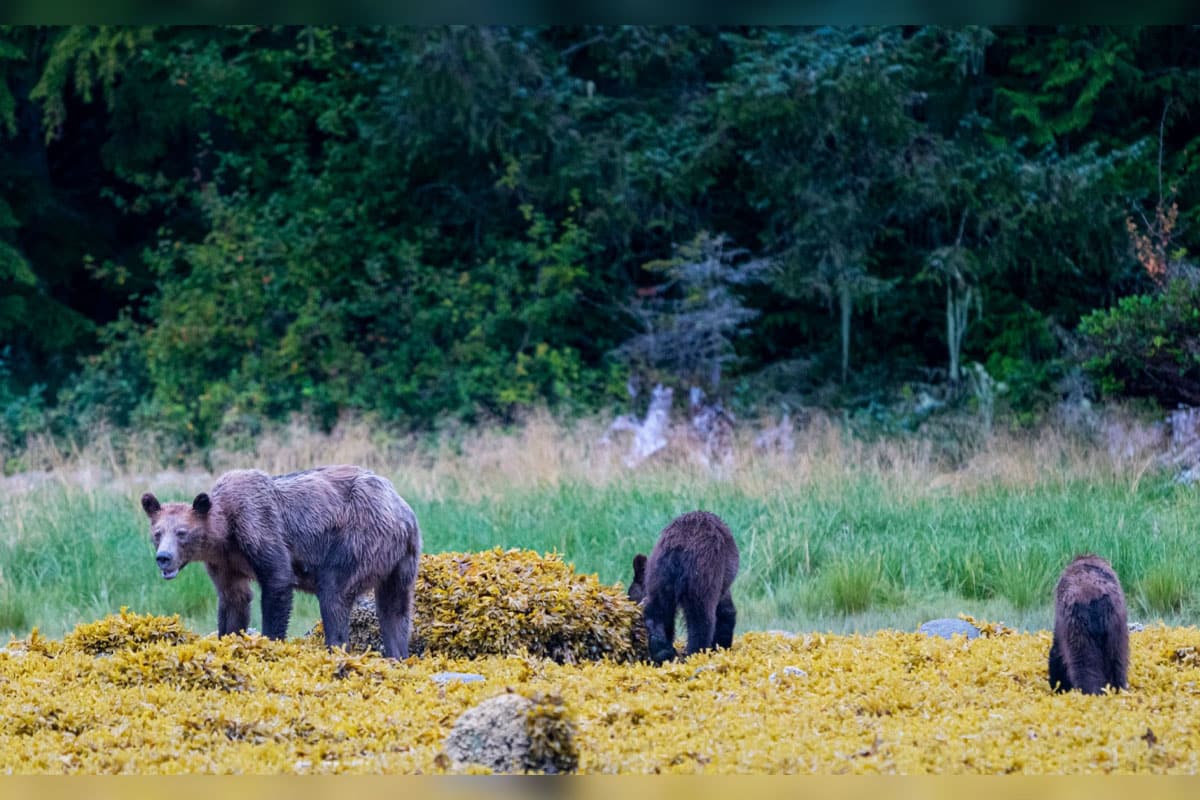 Some of the bears have started swimming out of Knight Inlet and are now making an appearance on Swanson Island, which is about an hour’s boat trip away.

Grizzly bears have also been seen on Vancouver Island, which is not their usual habitat.

This is conclusive proof that the animals are being forced to journey long distances in a desperate attempt to find food.

The changing behavior of the bears is impacting on the tourism industry in the area.

Rick Snowdon, the owner of Spirit of the West tour company, says that the bears are venturing into areas where they seldom went before.

Tourists, who go there for camping and kayaking trips, are becoming fearful of the bears as they have started to hunt closer to the campsites.

A face to face encounter with a bear is a bit more than they bargained for!

Experienced fishermen in British Columbia say that this year they have caught the lowest volume of salmon in living memory.

This is also bad news for the bears who live predominantly in British Columbia.

The blame for this disaster is being laid at the feet of global warming and the increase in the number of salmon farms in Canada.

Researchers have found that this is a common trend in places where salmon farming has been introduced.

As unusual as it was, delivering salmon to the bears is likely to become a common event as conservationists try to feed the bears before hibernation.

This will not resolve the problem of the declining number of salmon, but it is the only short-term option for saving the bears.