by Factionary 1 month ago4 weeks ago
890views

Everybody who lived through 9/11 knows her.

You might not consciously remember her, but her dust-covered image is certainly engraved somewhere in your brain.

She became known across the world as the Dust Lady, but her real name was Marcy Borders, and she never fully recovered after that horror which haunted her to her untimely death.

There are many pictures of unspeakable horror capturing the tragic events of 9/11. 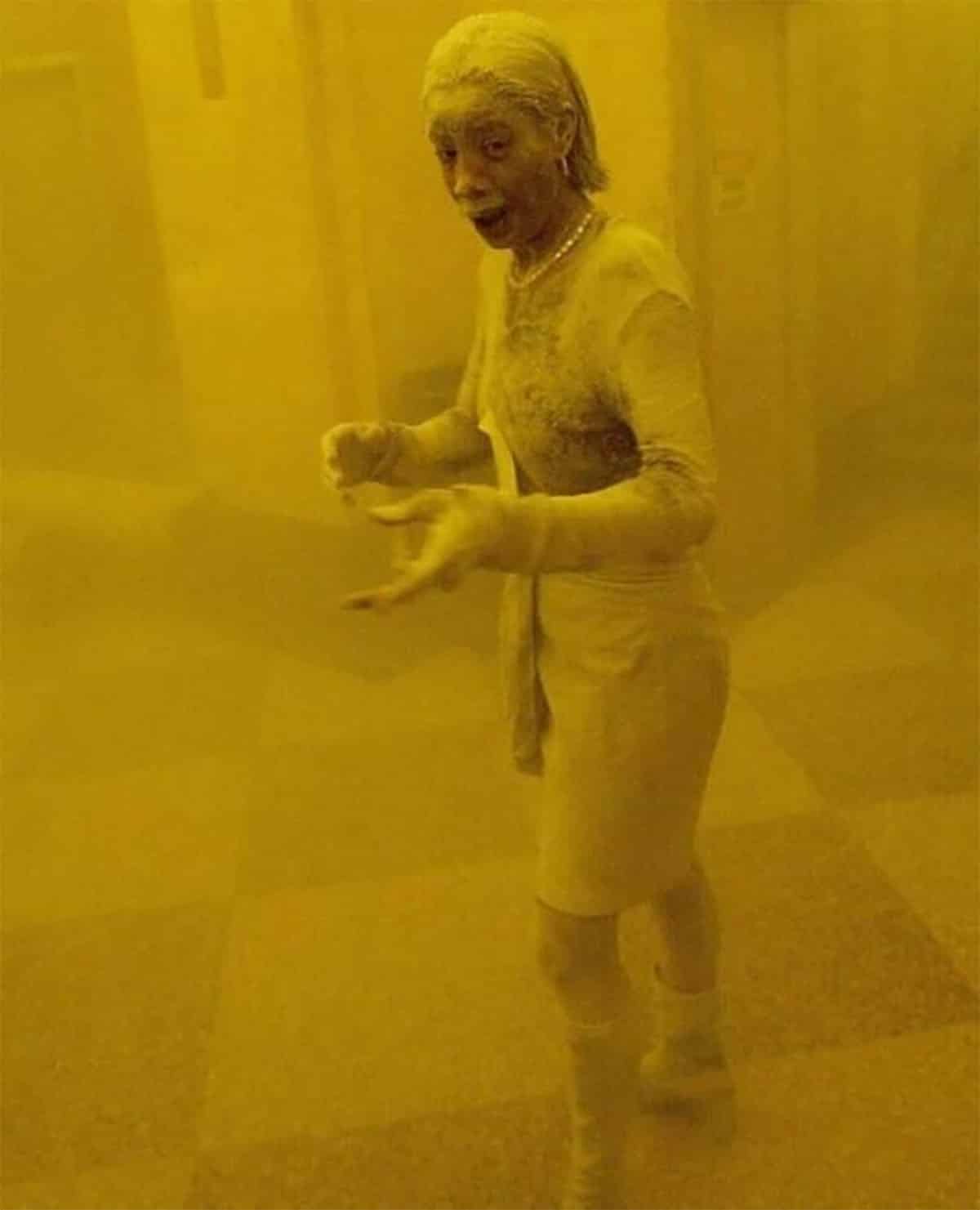 The man with the suitcase, the tiny silhouettes of the people jumping out of the windows in terror, the fires, the rubble, and the Dust Lady, a ghost-like apparition in that apocalyptic scenery.

Trapped In A Nightmare

On the morning of September 11, 2001, a 28-year old mother-of-two Marcy Borders was just starting a new day at the office, at the Bank of America. Only it wasn’t going to be a day like any other day.

At 8:46 AM, a plane hijacked by Al-Qaeda terrorists crashed into the North Tower at the World Trade Center between the 93rd and the 99th floors.

Marcy Borders was at her desk 12 floors below when the whole building shook. She panicked, just like so many on that day that made no sense.

Today, we have a minute-by-minute outline of how the tragedy unfolded, but in those moments the people in the Twin Towers had absolutely no idea what was going on. Only that it was bad, very bad.

The noise, the office supplies and the furniture falling from the stories above and then the people, those trapped by the flames who tried to escape a certain death by jumping out the windows to an equally certain death.

“They tried to calm me down, told me to relax, take deep breaths, but the way the building was shaking, I couldn’t sit there,” Marcy later recalled in an interview.

As a young mother, her survival instinct kicked in. She had to flee.

She took to the stairs and started an 81-floors descent into Hell.

As she made her way down the stairs the full horror of the situation became apparent.

That was no ordinary taking to stairs because the elevator was broke.

The stairs were full of desperate people, just like her, trying to make their way out, a decision that saved many lives that day.

The same people she’d not to in the lobby on her way up were now characters in a horror movie.

There was no point in stopping to help anybody, she could not provide help to anyone and some were already beyond help although they did not know it at the time.

In other circumstances, meeting the firefighters on their way up would have been a glimmer of hope, but the saviors themselves could not provide any help, either. 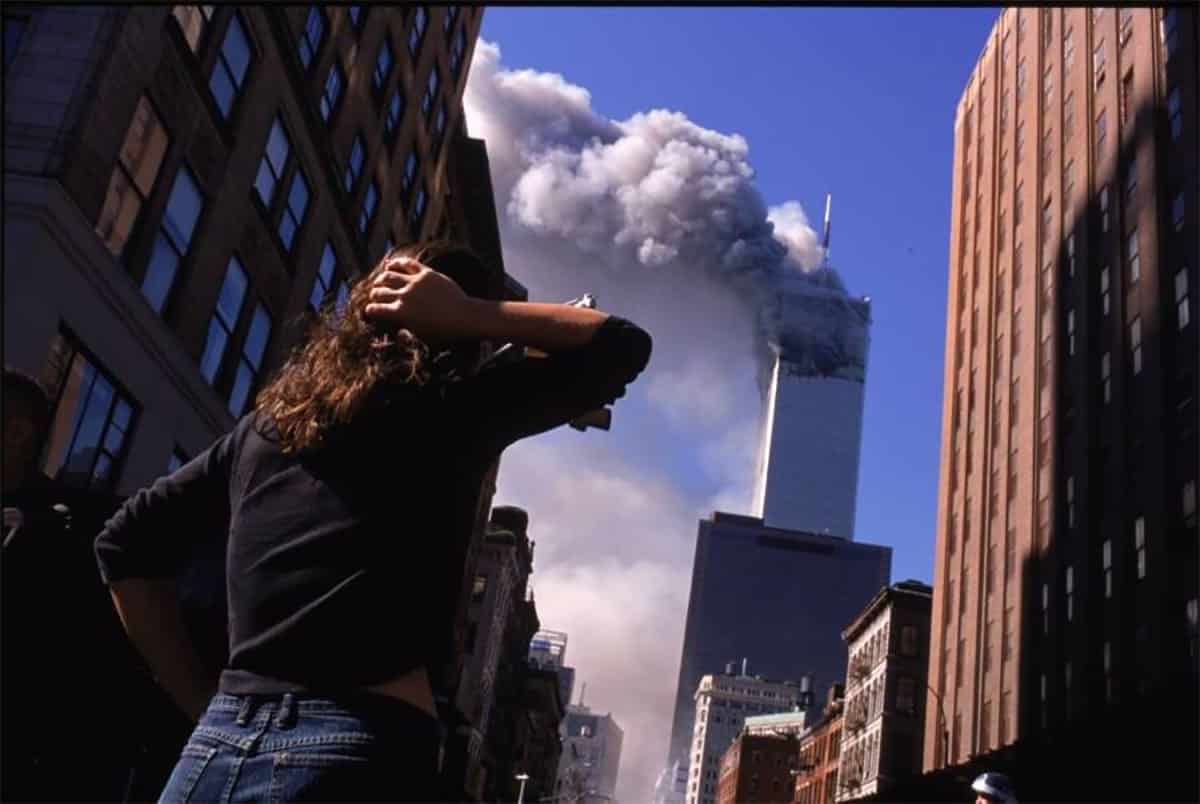 All they could do was scream at the fleeing employees.

“Run, and don’t look back!,” the firefighters screamed as they went up the stairs, a terrible decision that cost many lives that day.

Marcy Bowers made it outside just in time to witness another horror.

The South Tower which was hit after the one she worked in was the first to fall sending clouds of dust into the New York sky.

It was at that precise moment that Stan Honda, a freelance photographer working for the AFP, captured the image that was then printed on the first pages of newspapers and magazines all over the world.

You can tell Marcy Bowers was wearing a smart office suit but it’s impossible to tell what color as she was covered head-to-toe in dust.

Her face is not that of someone posing for a picture, there’s confusion and there’s terror in her eyes.

Soon enough the police intervened directing people to take shelter in the nearby buildings.

At the end of the day, Marcy Bowers was one of the lucky survivors of a hideous attack that left 2,977 people dead.

Marcy Bowers escaped physically unscathed but the psychological trauma was so enormous she struggled with it for years.

She never fully recovered from the horror she went through.

She remained terrified of planes and tall buildings and rarely ventured into Manhattan, preferring the safety of her New Jersey home. 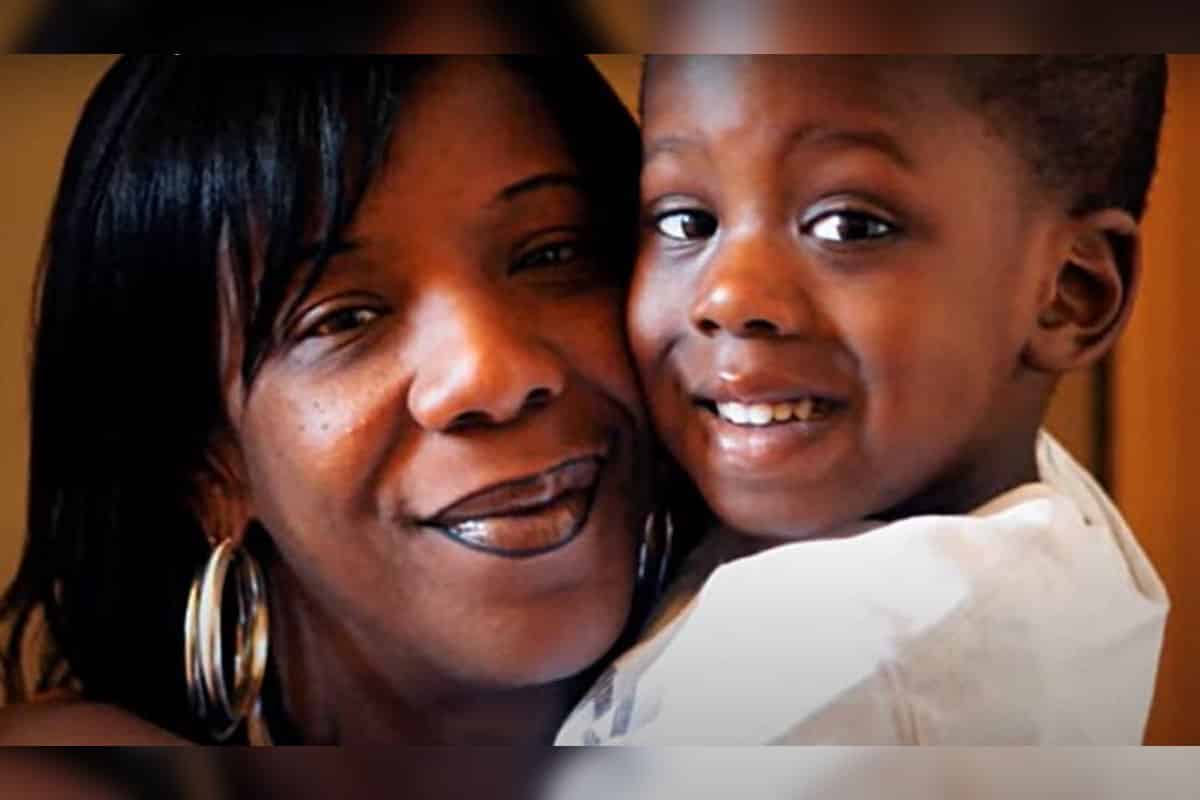 Marcy Bowers sank into depression which led to substance abuse.

Not that she gave up, she fought the sickness in her mind as best she could.

“I try to take myself from being a victim to being a survivor now. I don’t want to be a victim anymore” she said in an interview.

She entered rehab multiple times and it was working.

She was getting a grip on her life when, in 2014, she received another terrible blow.

Marcy Bowers was diagnosed with stomach cancer and to this day it is impossible to say if the terrible disease was caused by the dangerous substances she inhaled that day at the World Trade Center.

Over 3,700 survivors and first responders were later diagnosed with cancers linked to the poisonous air that engulfed the city in the aftermath of the terrorist attack.

She tried to fight cancer, too, but this time she did not win. Marcy Bowers died on August 24, 2015.

For us, she will remain the Dust Lady, a symbol of the horrendous attack, but for her children, who witnessed firsthand her battle against depression and cancer, she is a hero.

“Not only is she the Dust Lady, but she is my hero. And the dust has settled, and she is free now,” her daughter Noelle said.