by Factionary 1 month ago4 weeks ago
481views

The impressive Bran Castle can be found on the border Transylvania and Wallachia in Romania. Dracula’s castle often grabs curiosity and is admired.

Near the city of Brasov and close to the village of Bran, as it can be seen rising over the Bran Gorge, it demands our attention.

In 1377, the fortress was initially documented, when the right to create the citadel was given to the Saxons of Brasov, which in Germany is known as Kronstadt by Louis I of Hungary. 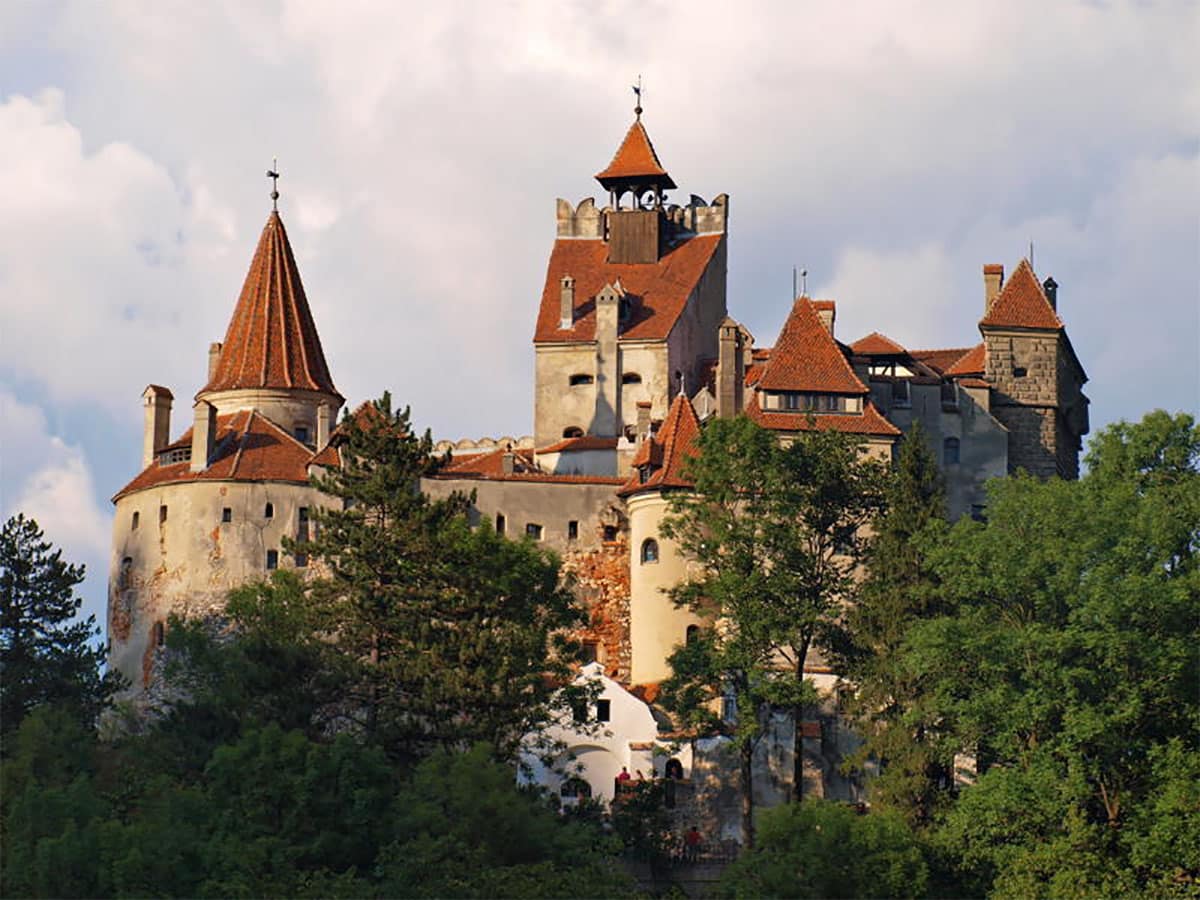 Initially, the castle’s purpose from 1438 to 1442 was to defend against the Ottoman incursion. Originally the castle was owned by the Hungarian kings.

But because they were unable to make payments on a load, in 1533, the City of Brasov repossessed it and it would then go on to become the royal residence for the Kingdom of Romania in 1920.

Because of the location of Bran Castle, its dramatic architecture, and its connection to Vlad III Dracula and his connection to Bram Stoker’s Dracula, the Romanian government decided to market the castle as the “real Dracula Castle.”

It would attract tourists and diversify Romania’s economy while giving the country exposure to make it well-known to the Western World.

The castle, now a museum, has been widely visited and respected both for aiding the economy of Romania and bringing more light to the legend of Vlad III Dracula.

Here are some of the facts and features of the ancient castle. 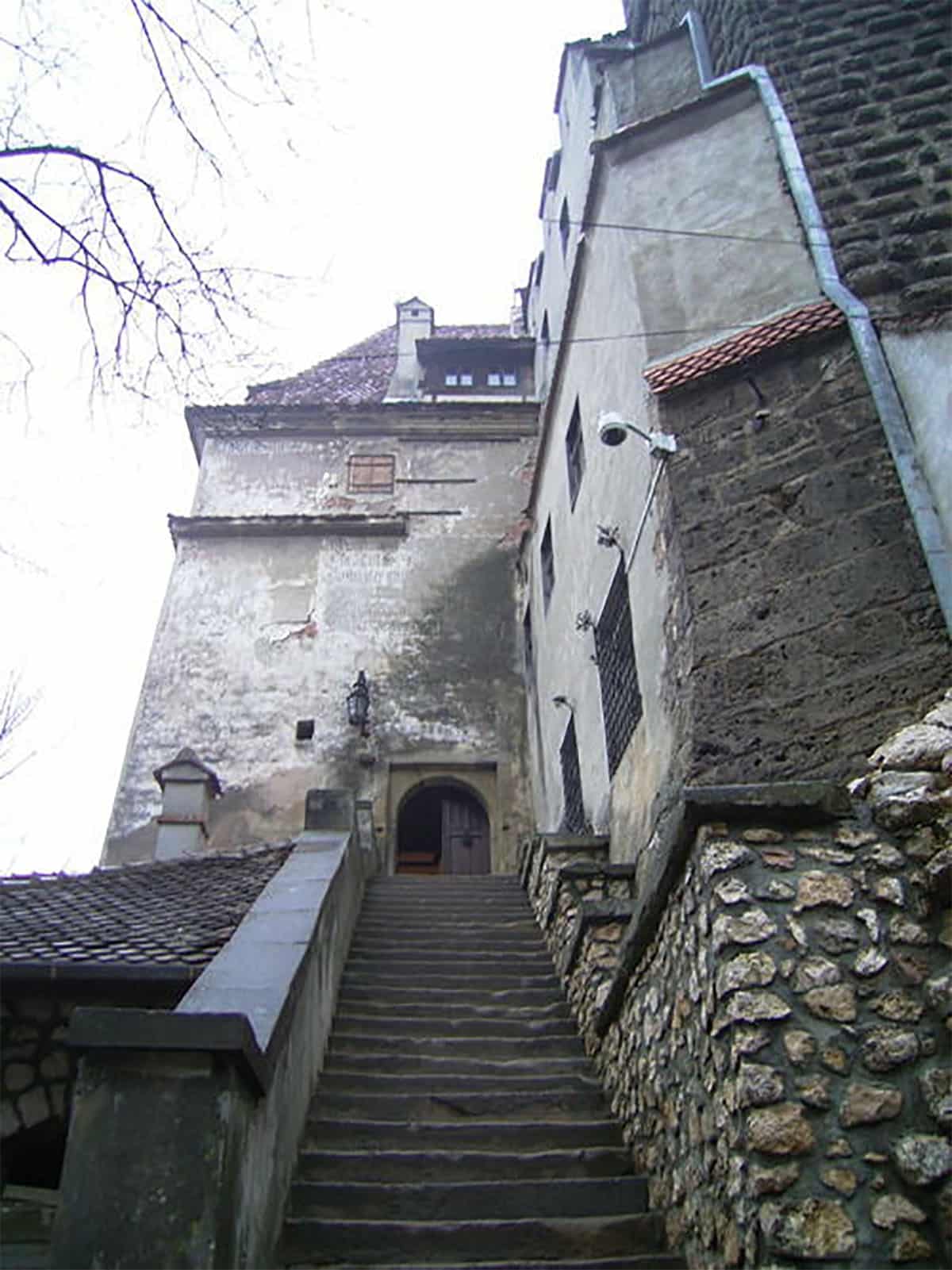 The entrance to the castle sits above a large stone staircase. 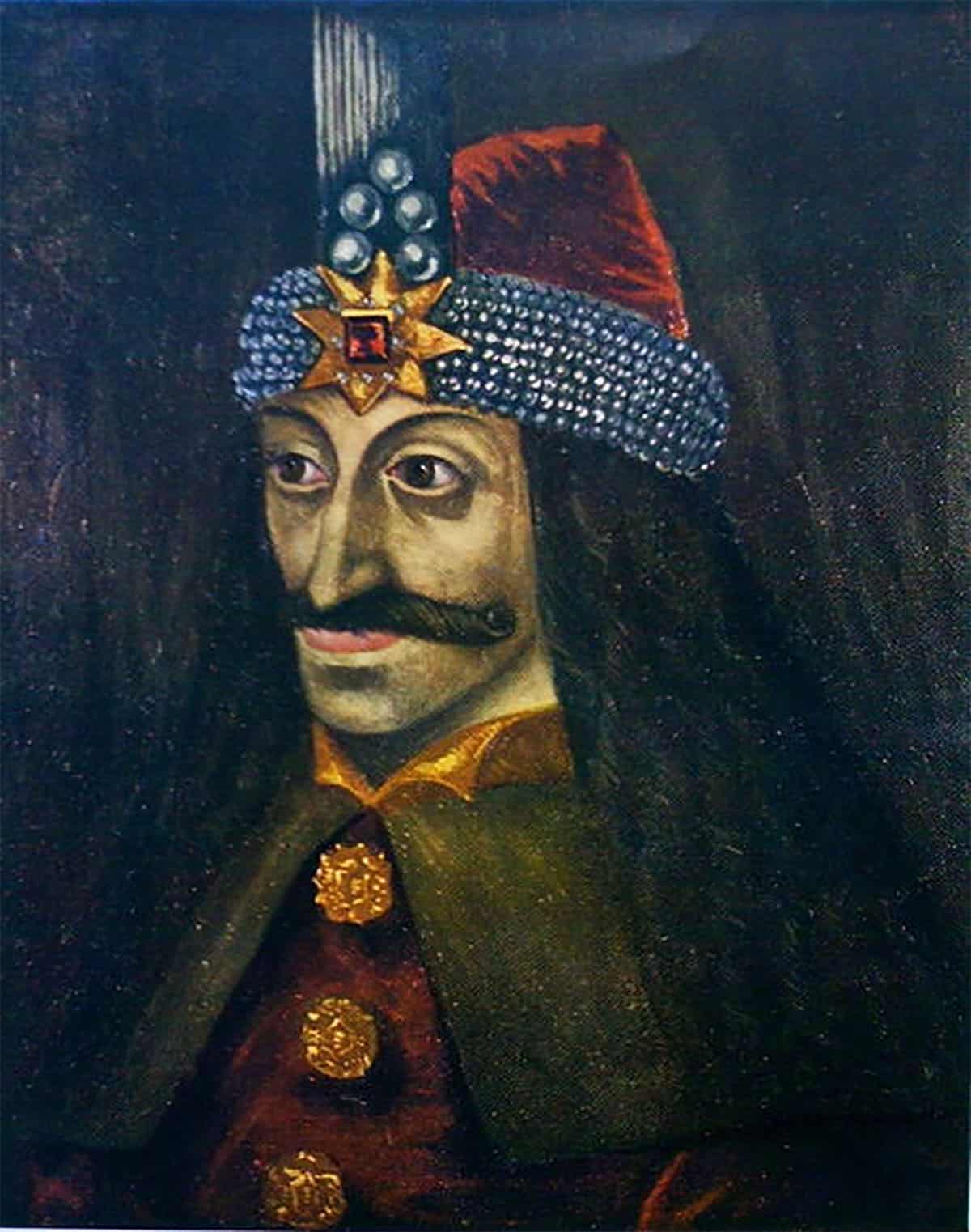 A Wallachian ruler, known as Vlad Tepes, who was famous for impaling his enemies, and was also the inspiration for Bram Stoker’s Dracula which would go on to be released in 1992.

While it is marketed as “Dracula’s Castle,” in actuality, Tepes would only be in the castle’s holding for two months.

However, the Bran George was used by him while he traversed through the mountains. 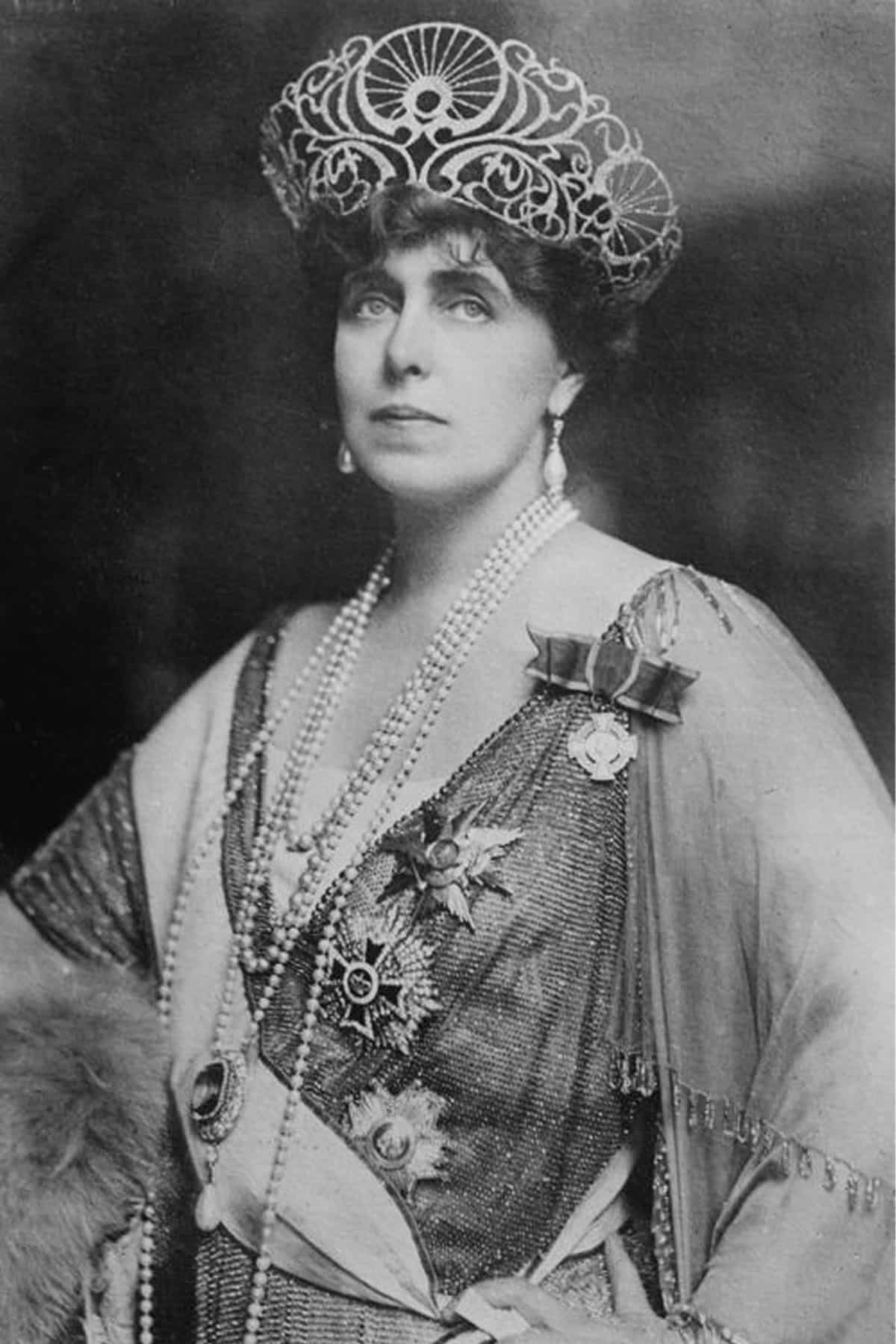 The castle was gifted to Queen Marie, wife of Ferdinand, by the citizens of Brasov.

Marie would fill the imposing halls with laughter and kindness until she died in 1938. 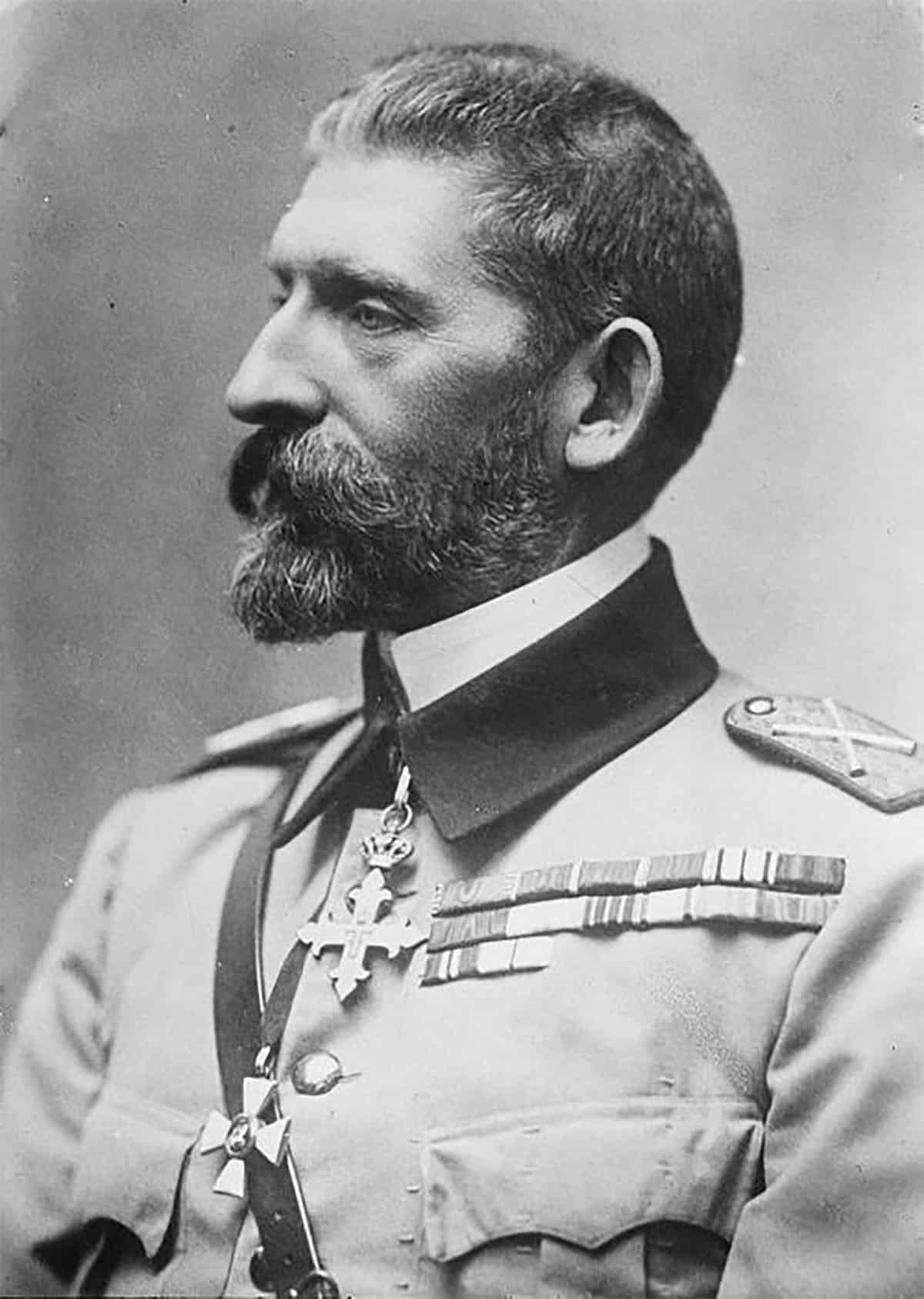 On October, 1914, King Ferdinand was made the ruler of Romania and would continue to rule over Romania until 1927 when he died.

Most of his time was spent between Bran Castle and Peles Castle. 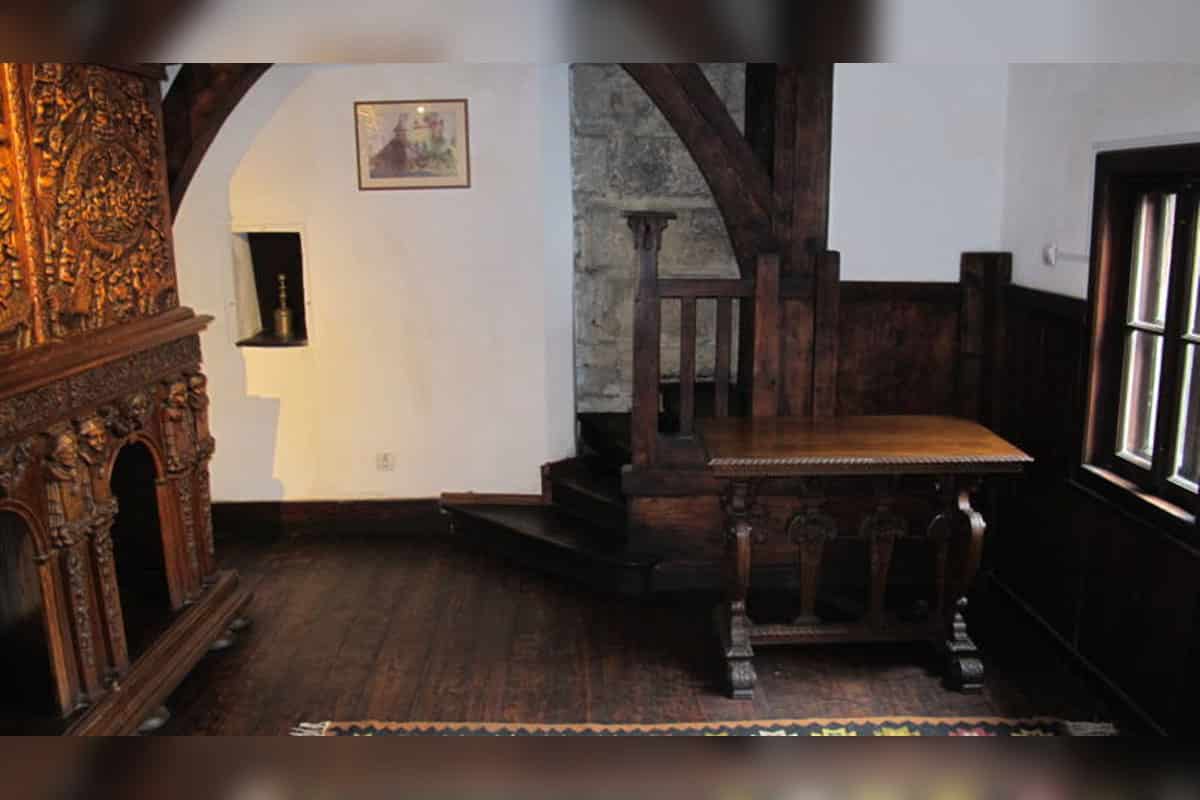 The communist regime would later seize the castle in 1948, expelling the royals.

In 1989, communism fell, but it wouldn’t be until 2005 that the royal family would see the castle returned. 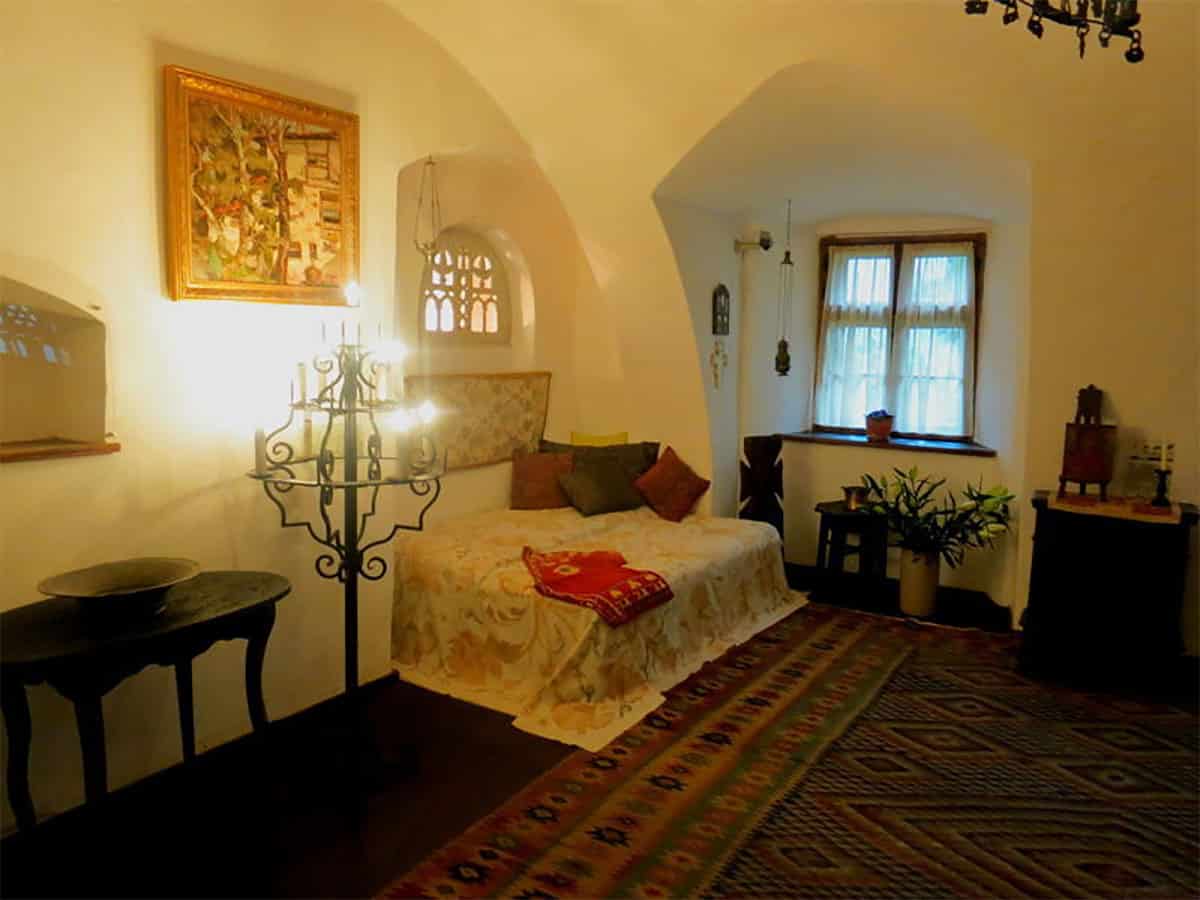 Queen Marie’s apartment was made up of a bathroom, bedroom, a hall, a dressing room, two salons, and a dining area.

She accrued many sets of statues, china, books, and icons. 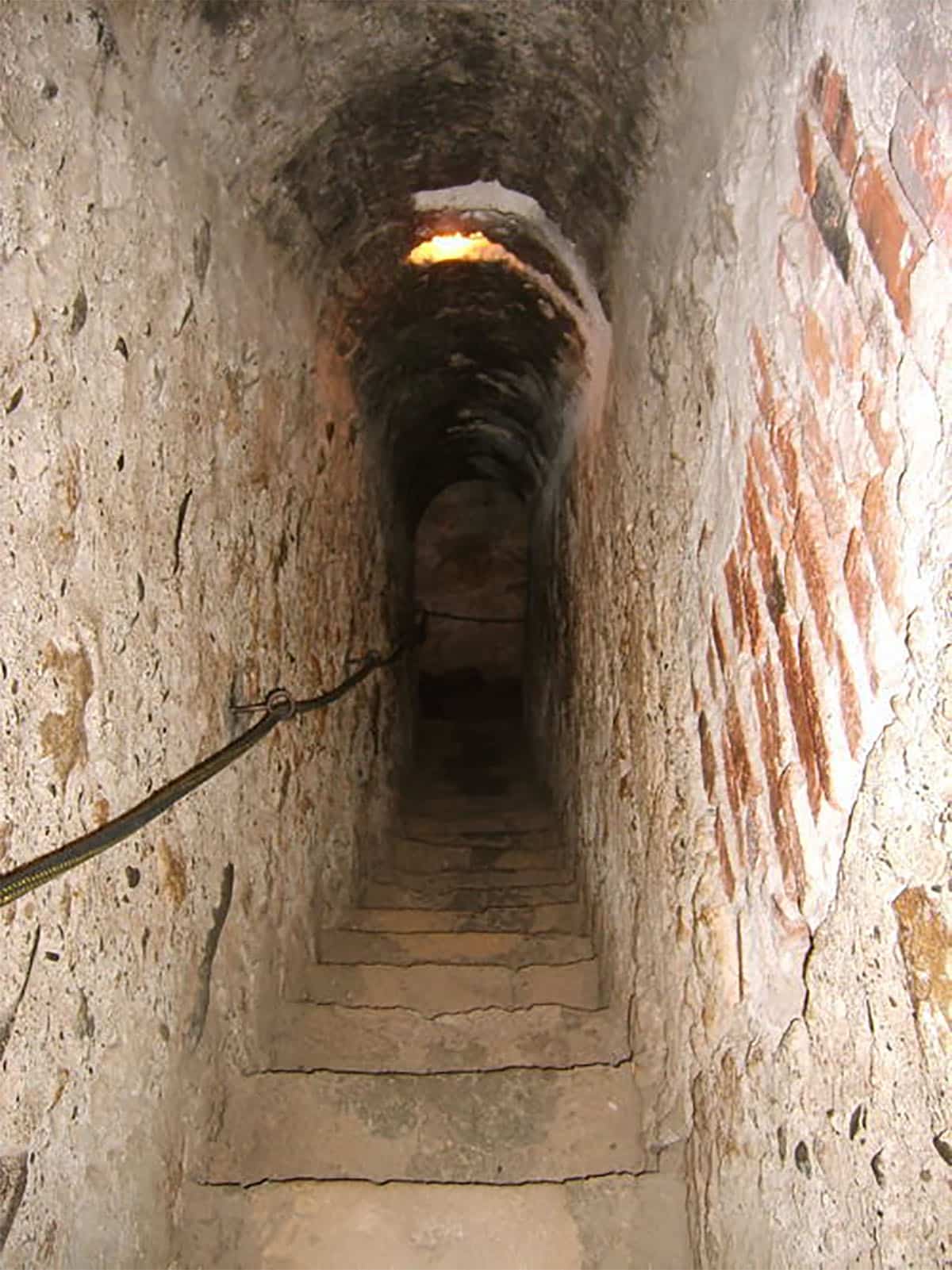 The first and third floors are connected through a secret passage and just “discovered” during renovations in the year 1927.

The castle is linked to the fountain in the interior garden through another secret tunnel. 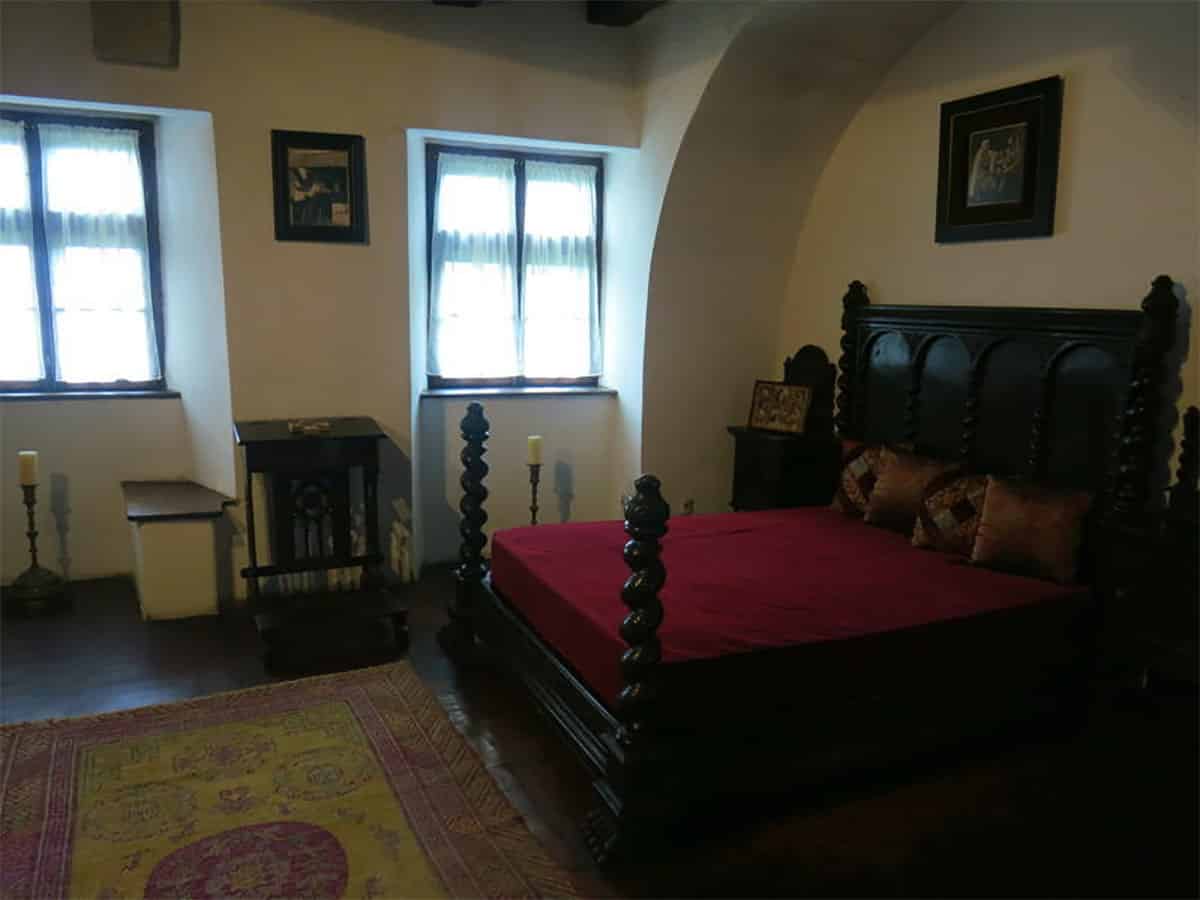 His room can be seen displaying stunning views of the commune below as well as intricate furniture. 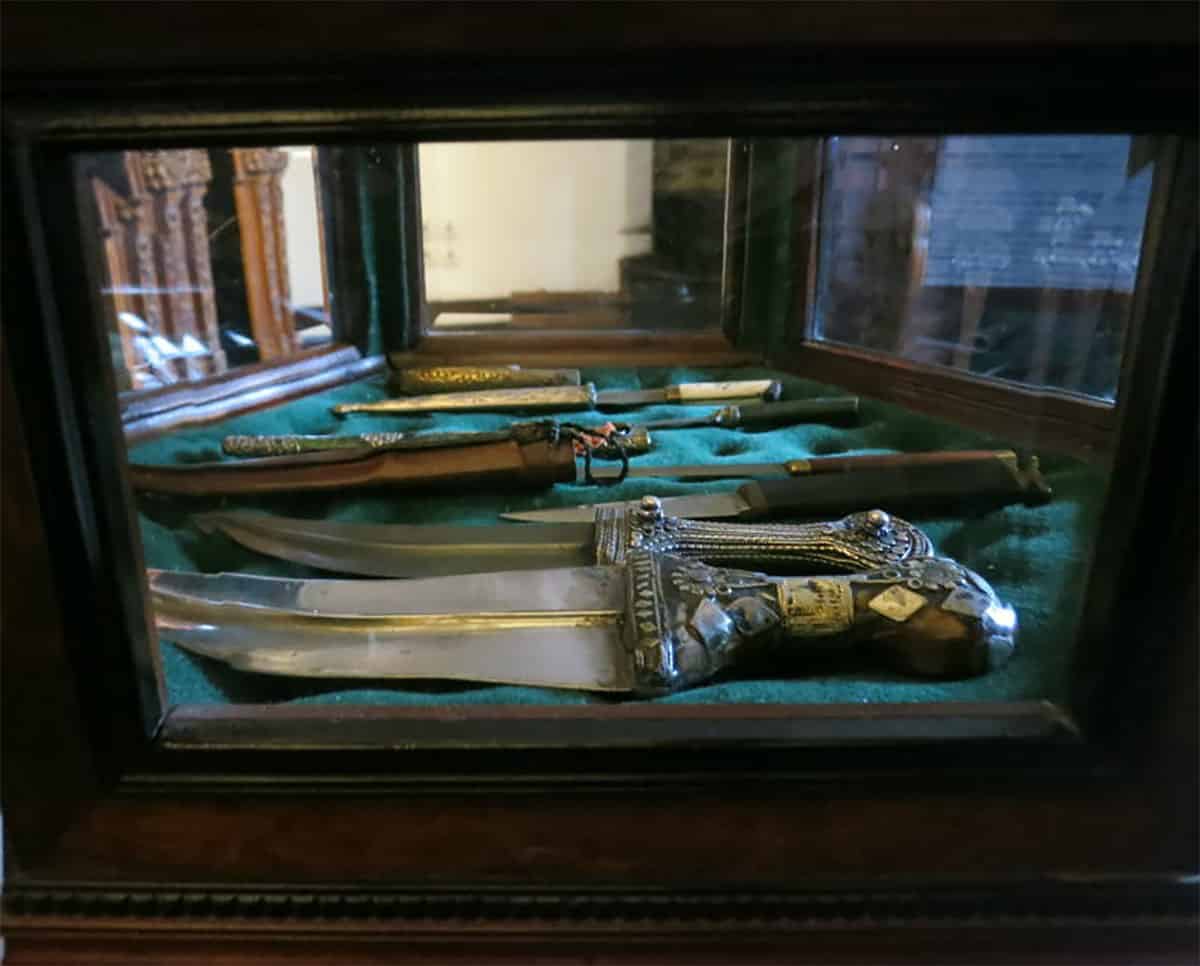 King Ferdinand’s collection of daggers are on display in Bran Castle. 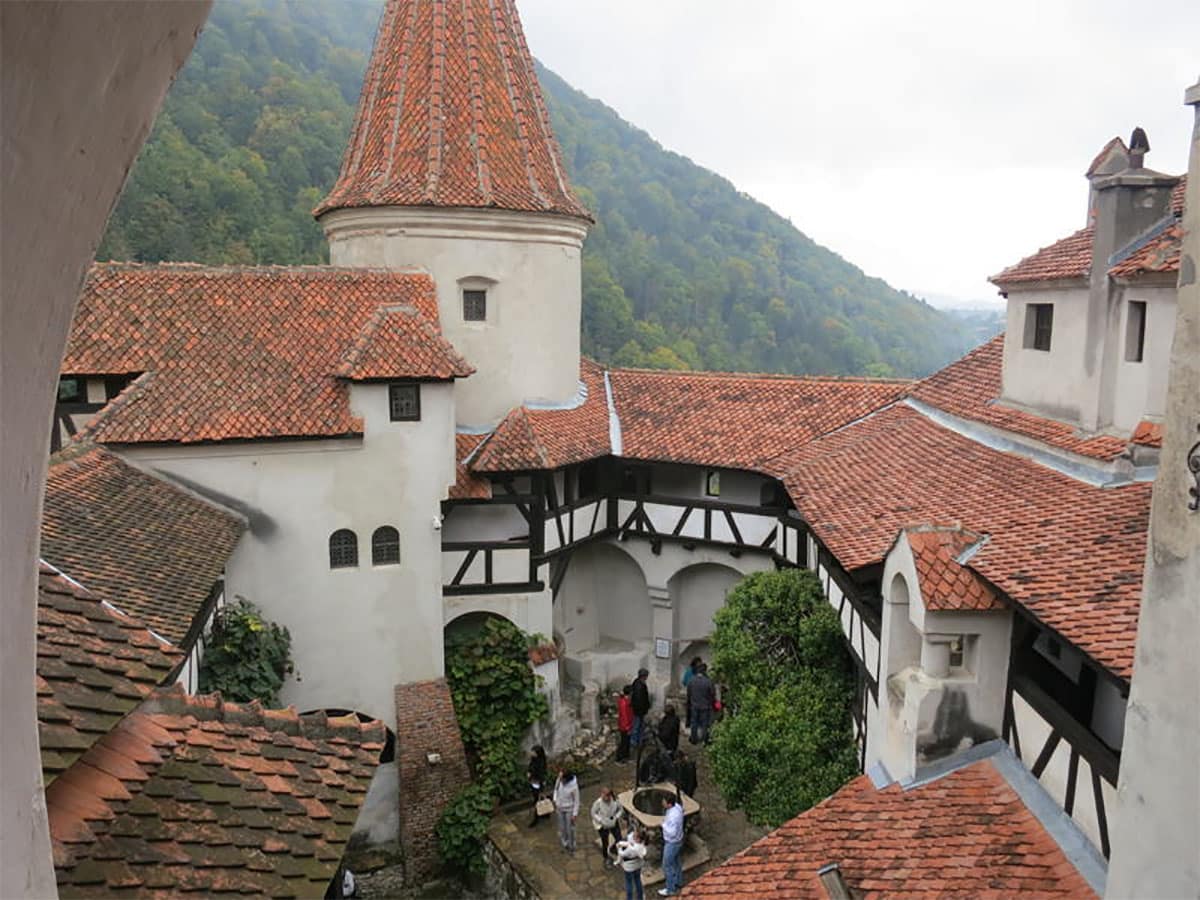 A lusciously styled courtyard can be seen graving the center of the castle, which at the time was a common feature of edifications. The open passageways can be seen snaking around the central patio. 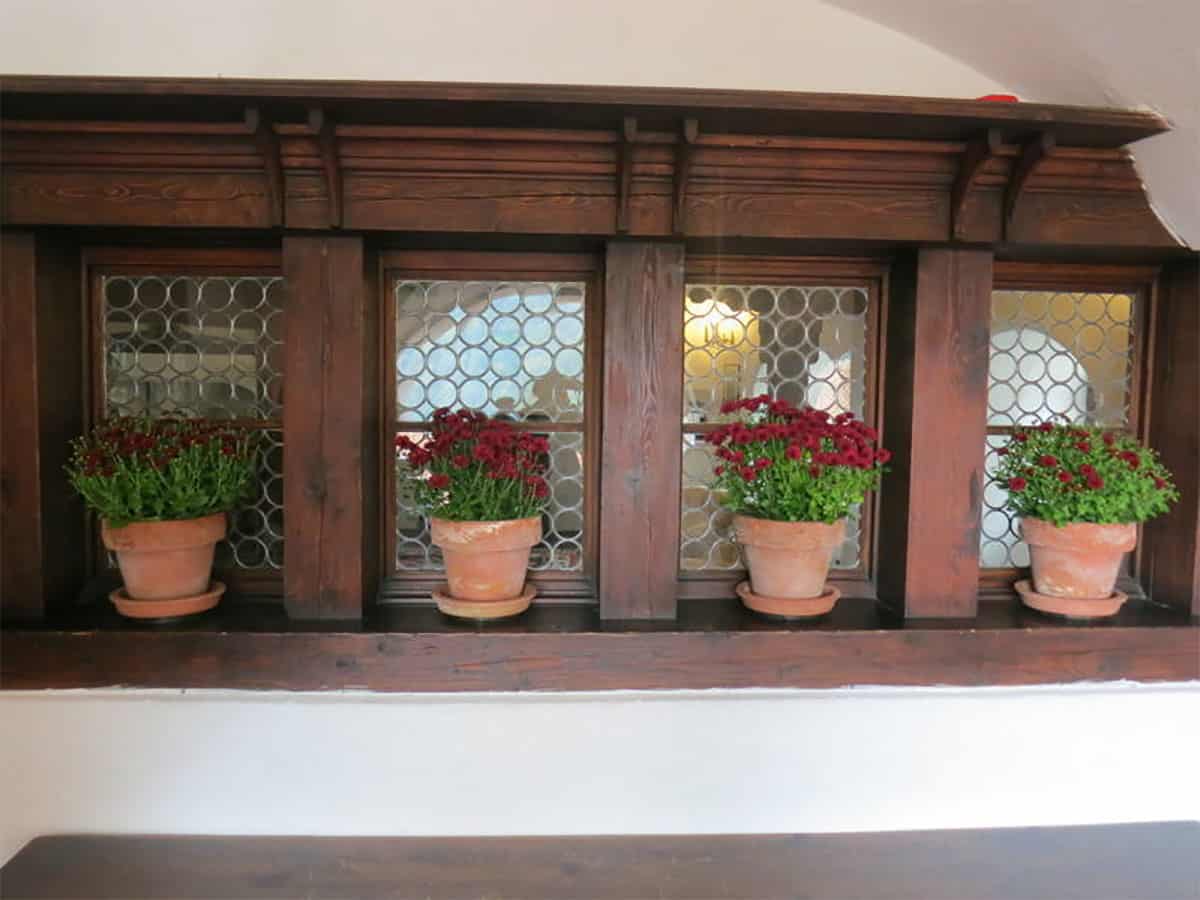 From a loggia which in the summer was used as a dining room, a wooden framed window can be seen looking into a sitting area. 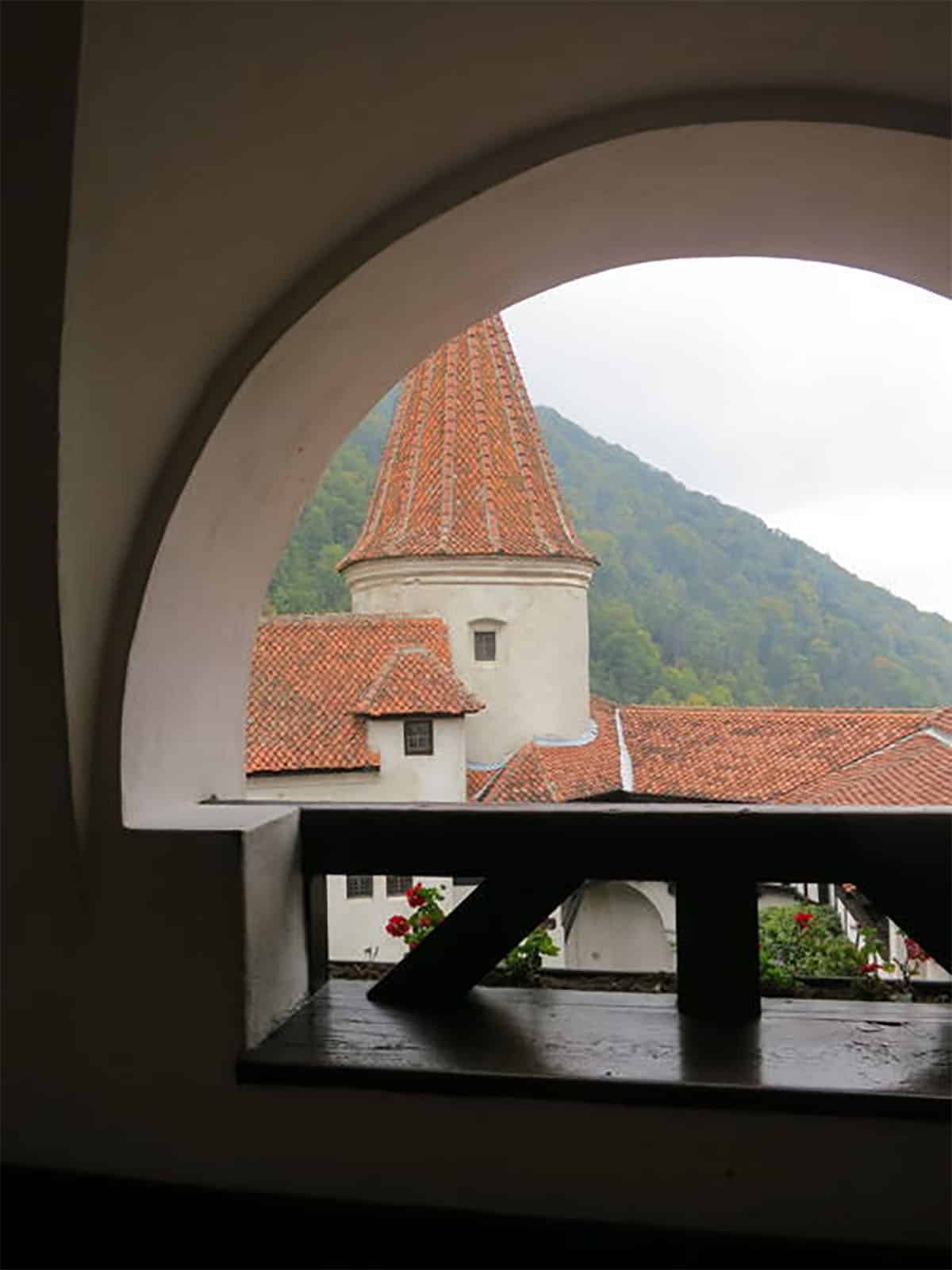 From the loggia, Bran Castle’s round tower can be seen, while the lush Carpathians provide an ideal backdrop. 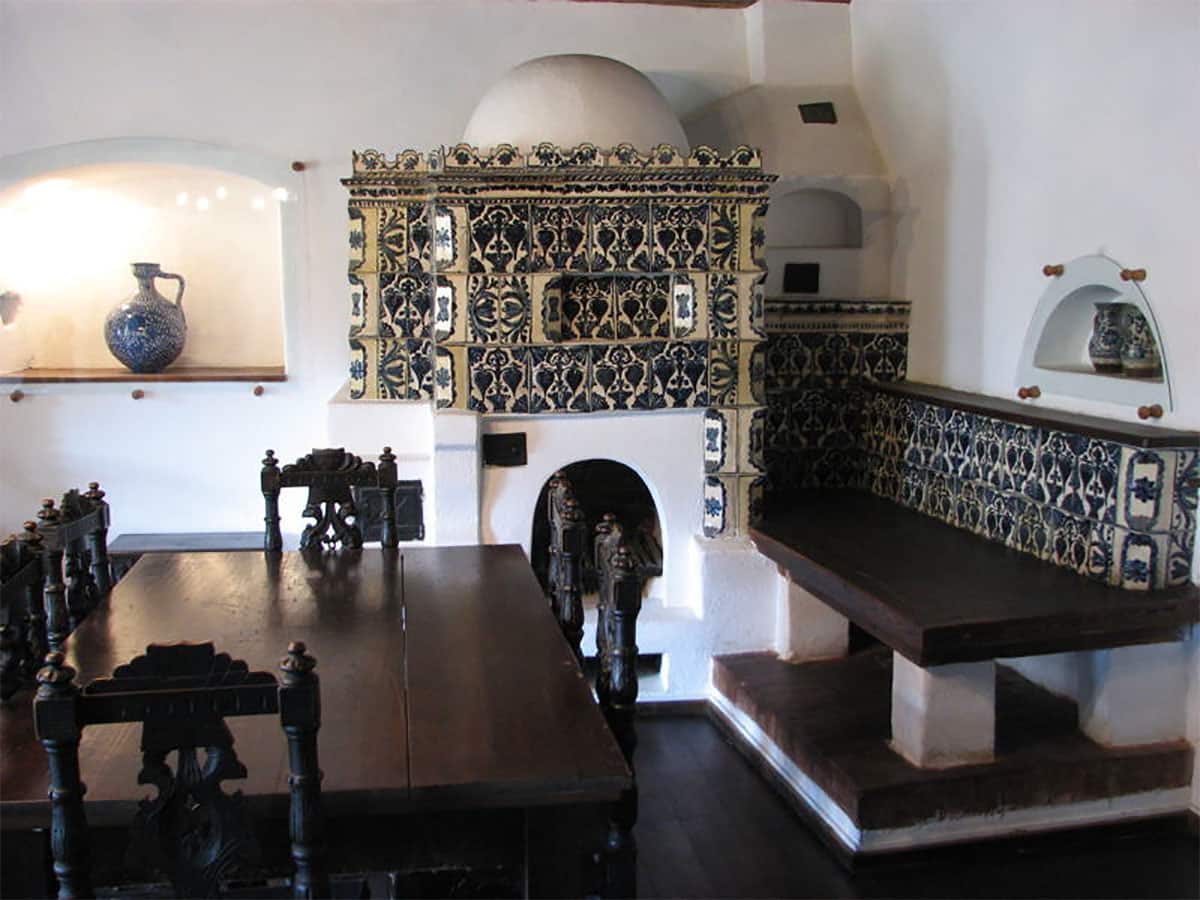 The living and dining area centers around a hand-painted hearth and are connected to the King’s bedroom.

As a result of their significance to Romania’s cultural identity, the pottery and painting are highly valued. 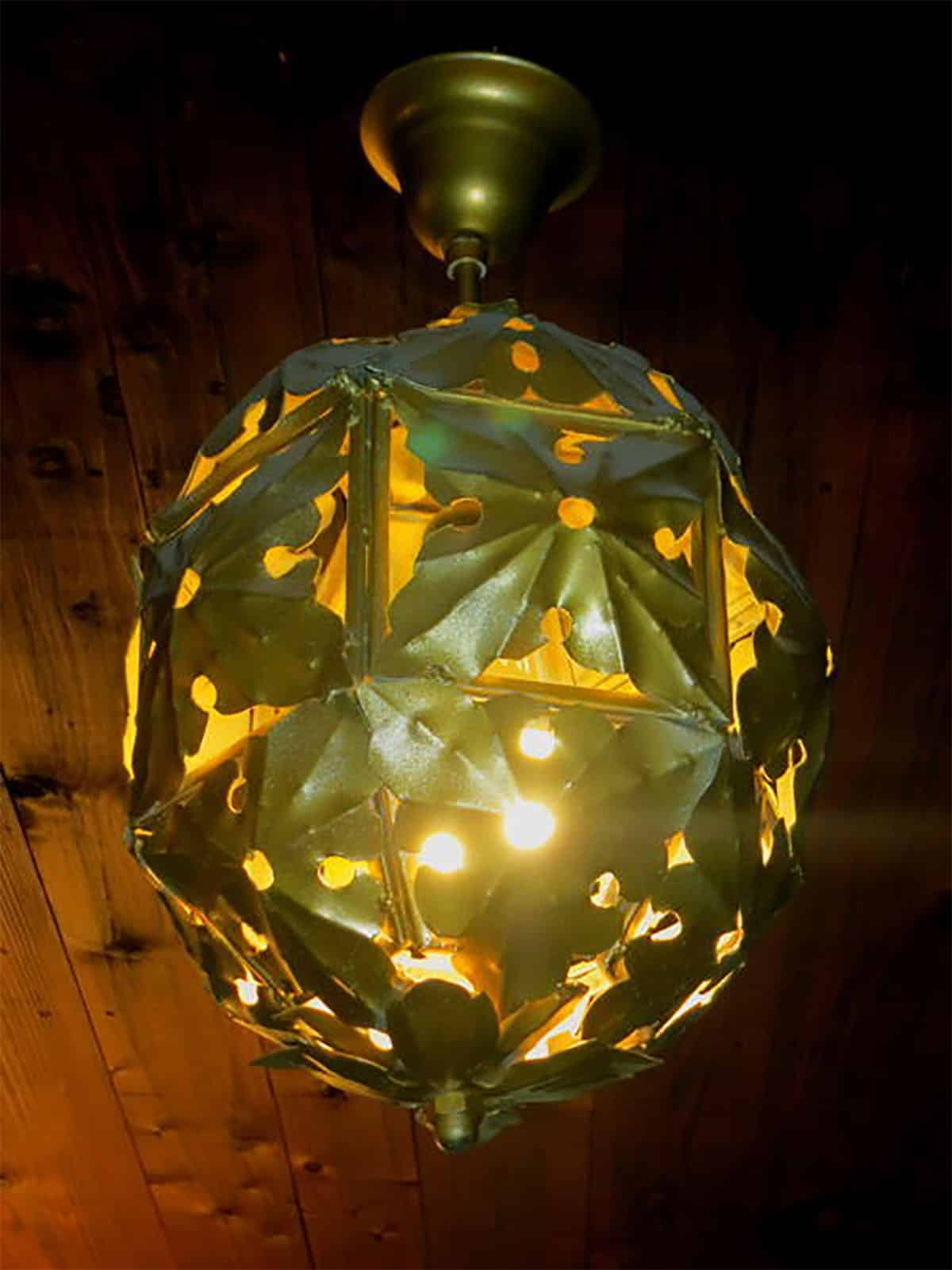 Throughout the castle, intricate and hand carved fixtures can be seen adorning the ceilings and walls.

While the dark wood floors creak and the metal door knobs can be heard clanging in the light of the Romanian candelabras and lanterns. 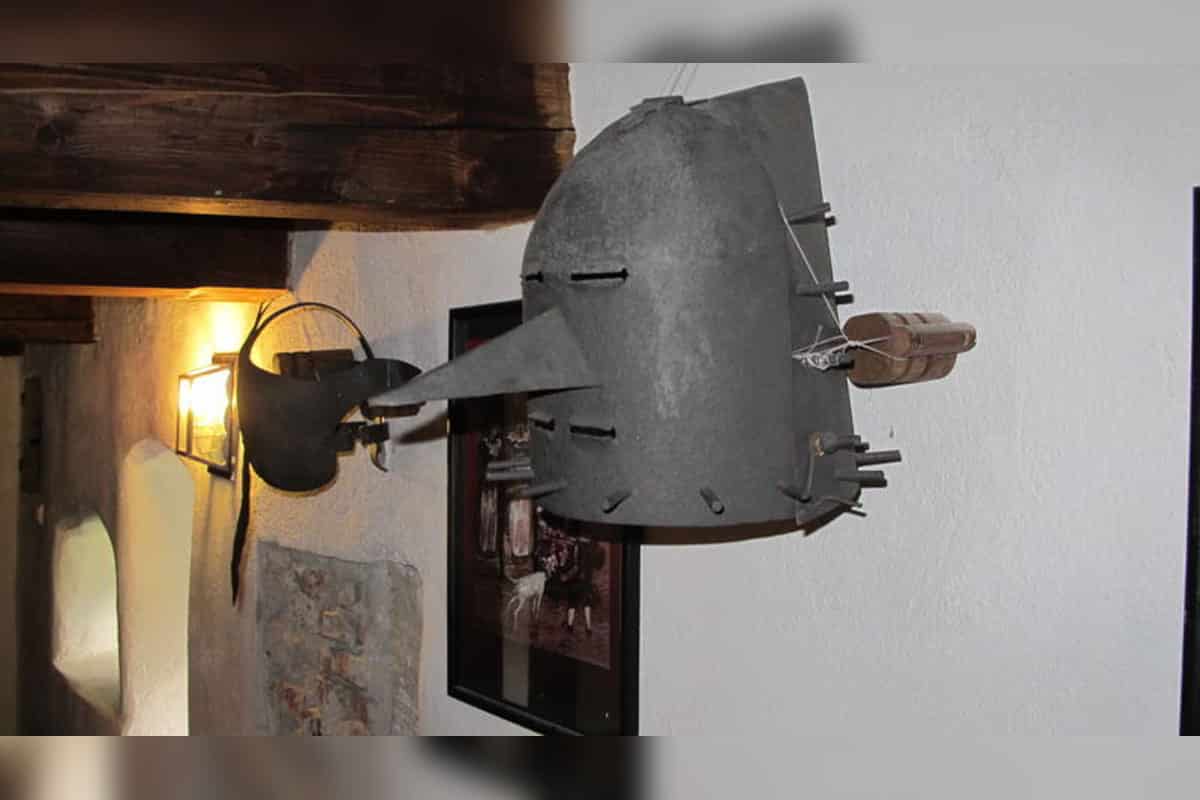 Bran Castle also features a small torture museum on the second floor in a private area that can be seen coiling up into a private balcony and smaller rooms. 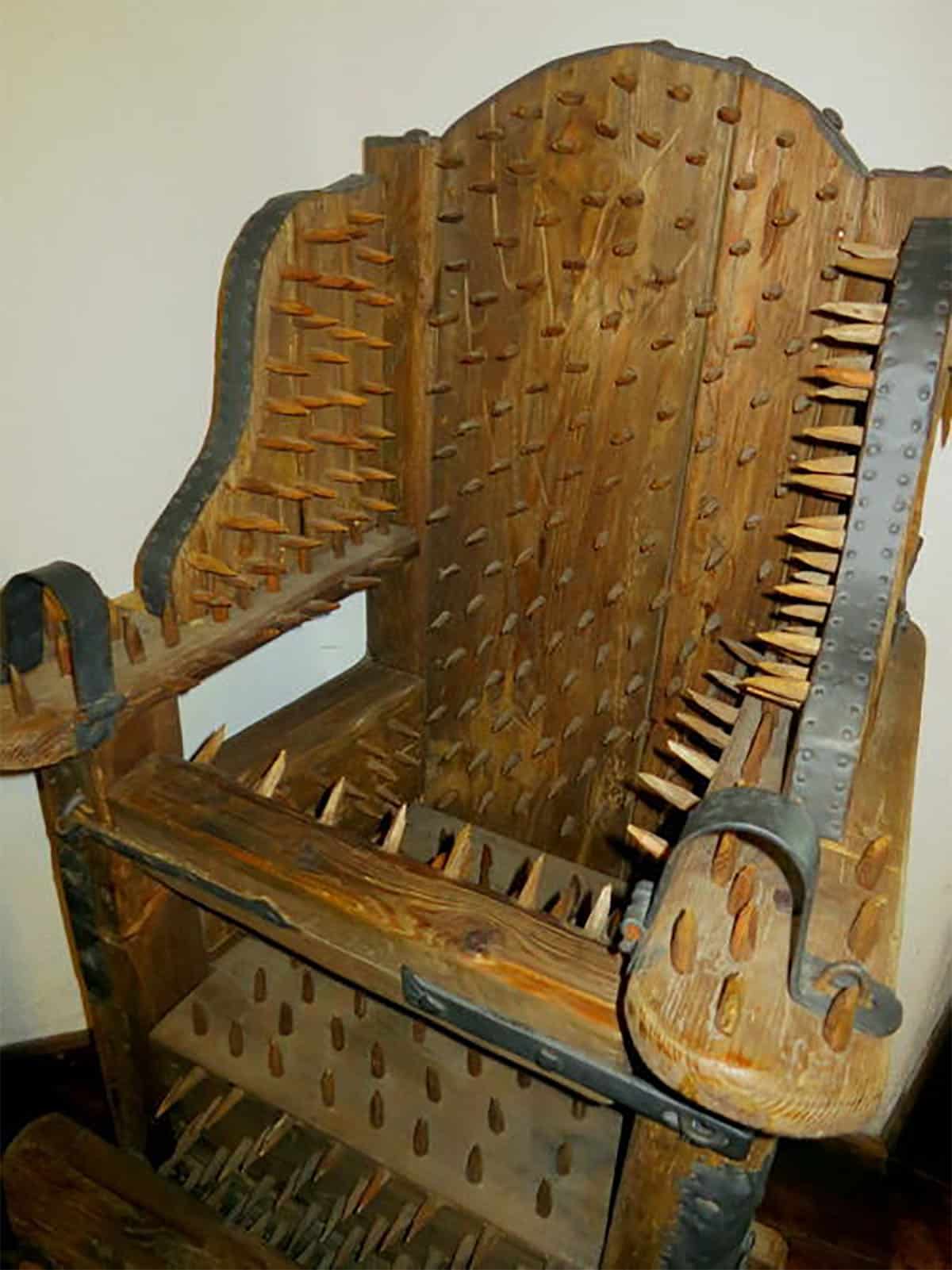 A chair of torture, an iron maiden and the rack, amongst other torturous items can be seen on display in the torture museum.

Guests may even notice the beautiful view of the hamlet which surrounds the castle if these rooms weren’t filled with such terror. 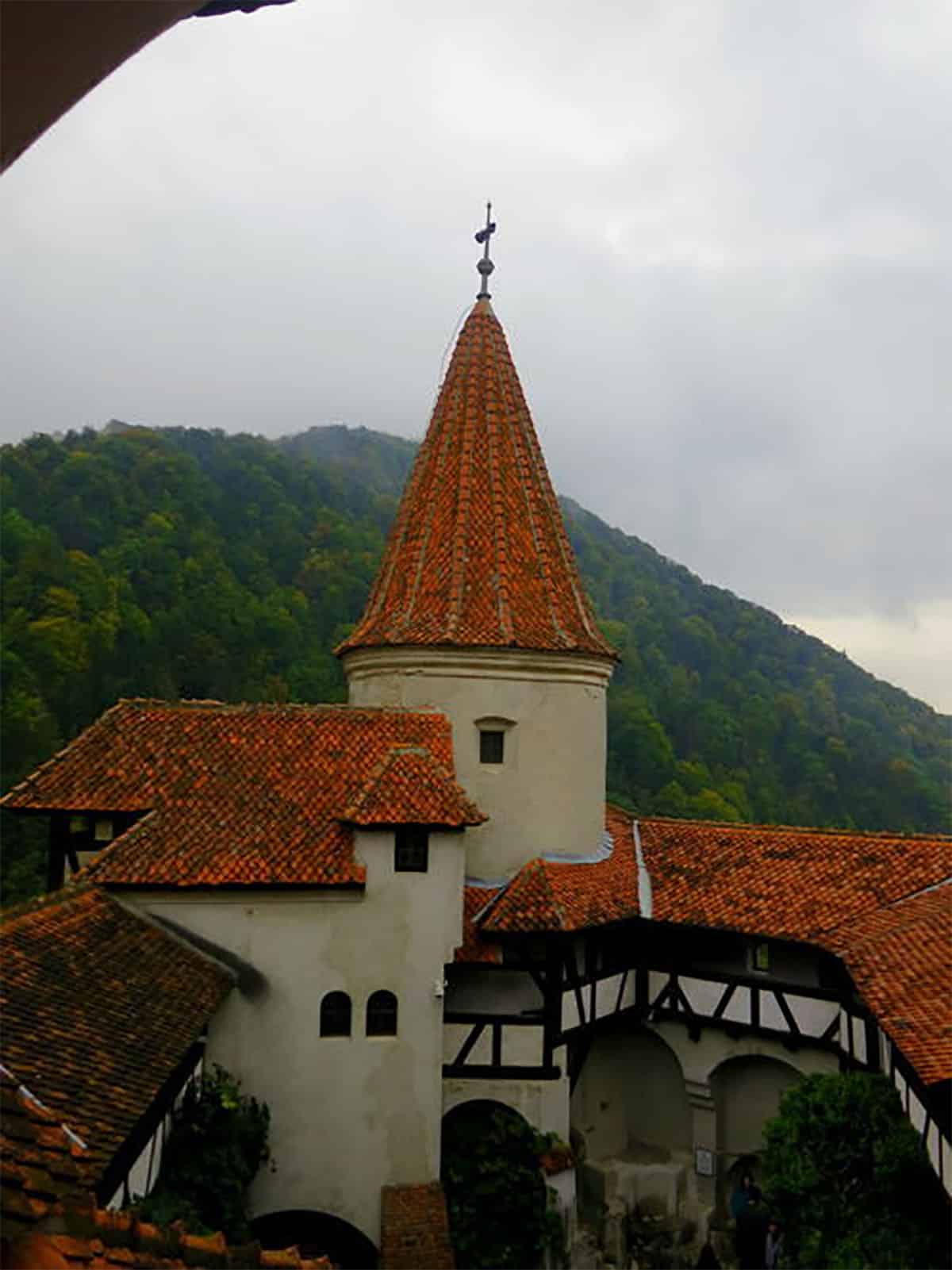 Queen Marie and King Ferdinand’s family consisted of eight children, some of which resided in the castle, including Princess Ileana.

Ileana would later have the grounds of the castle transformed into a hospital to aid the sick and wounded during Second World War. 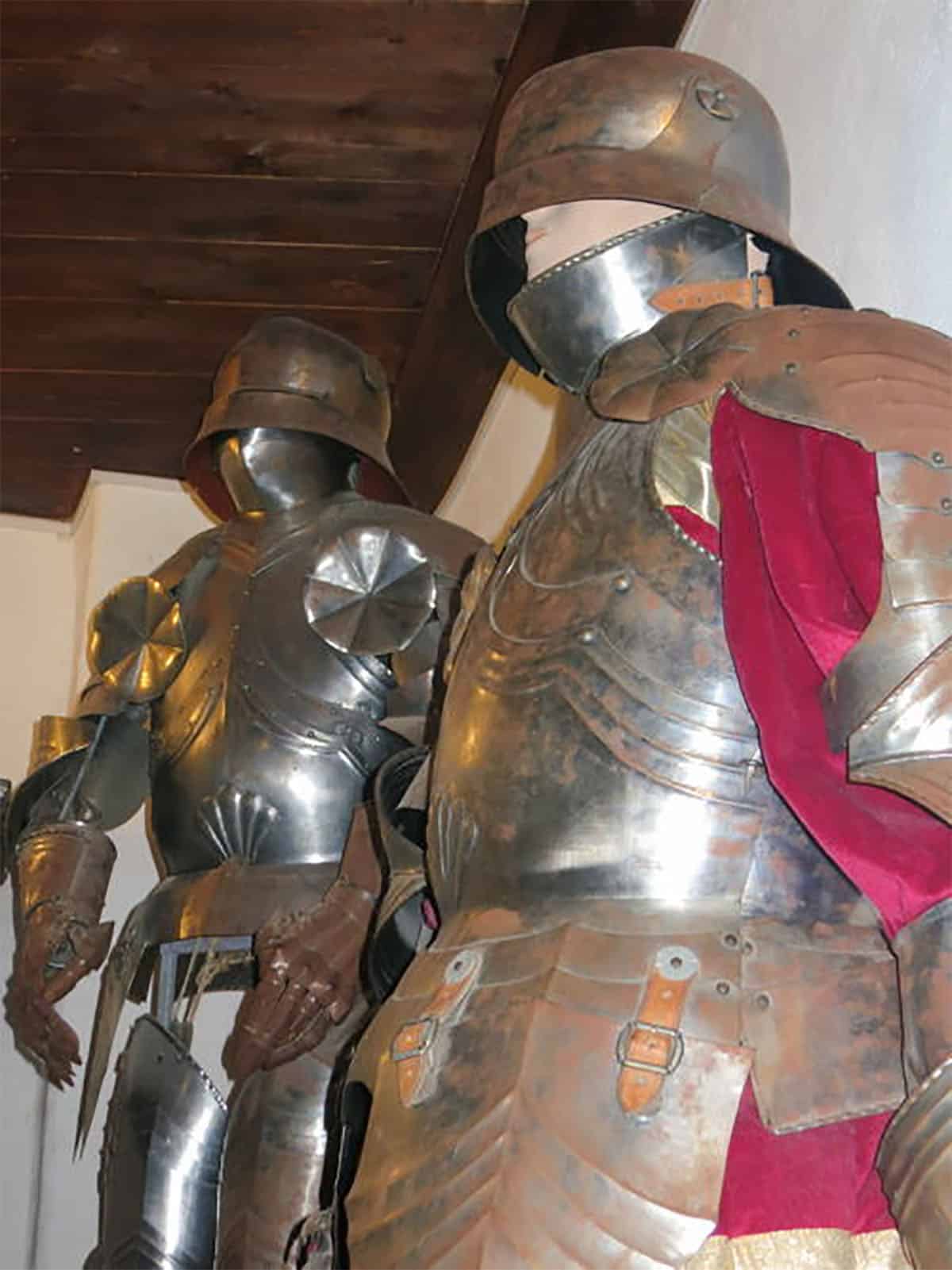 Queen Marie and King Ferdinand’s costumes can be seen on display, along with heraldic banners, ancient weapons and suits of armor from communes and cities that were nearby. 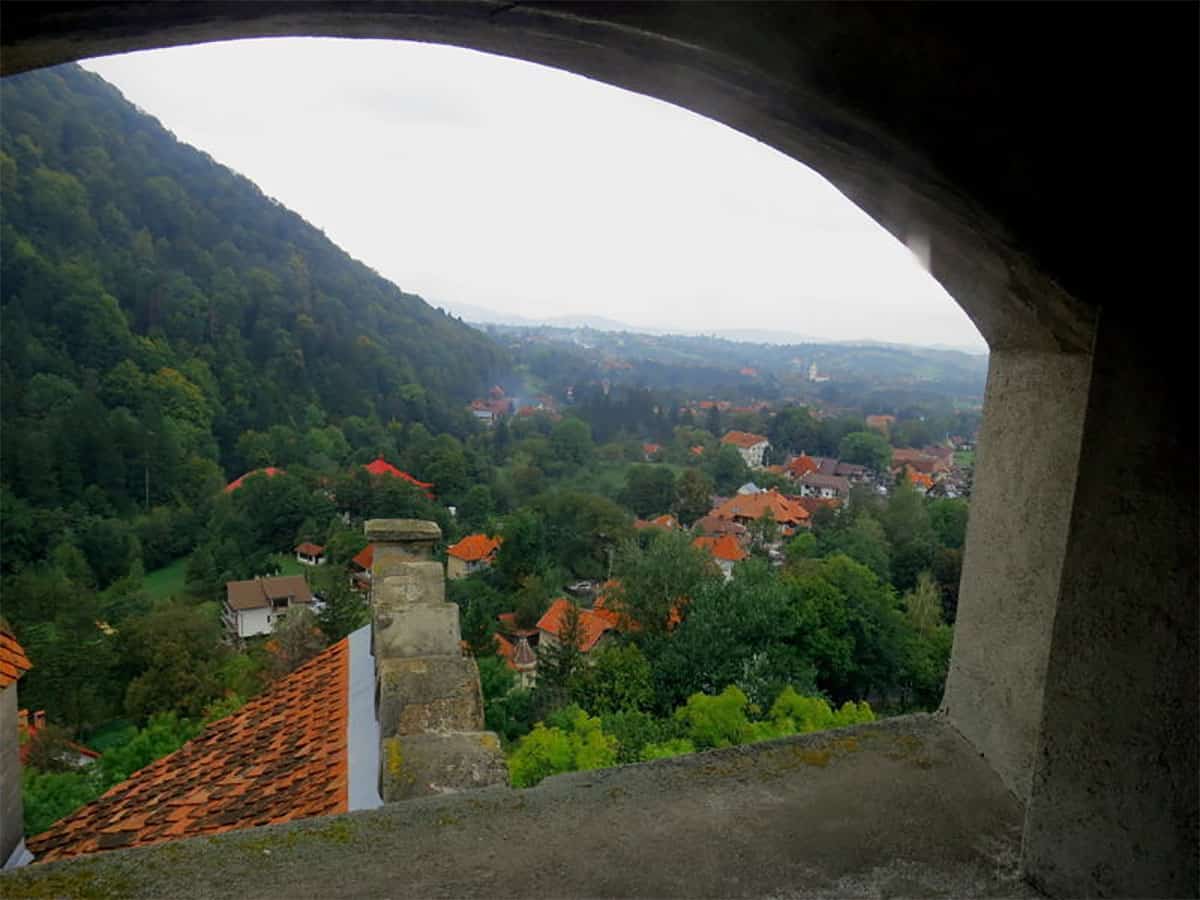 The castle has a purview over the town, countryside and the mountains due to its strategic construction location. 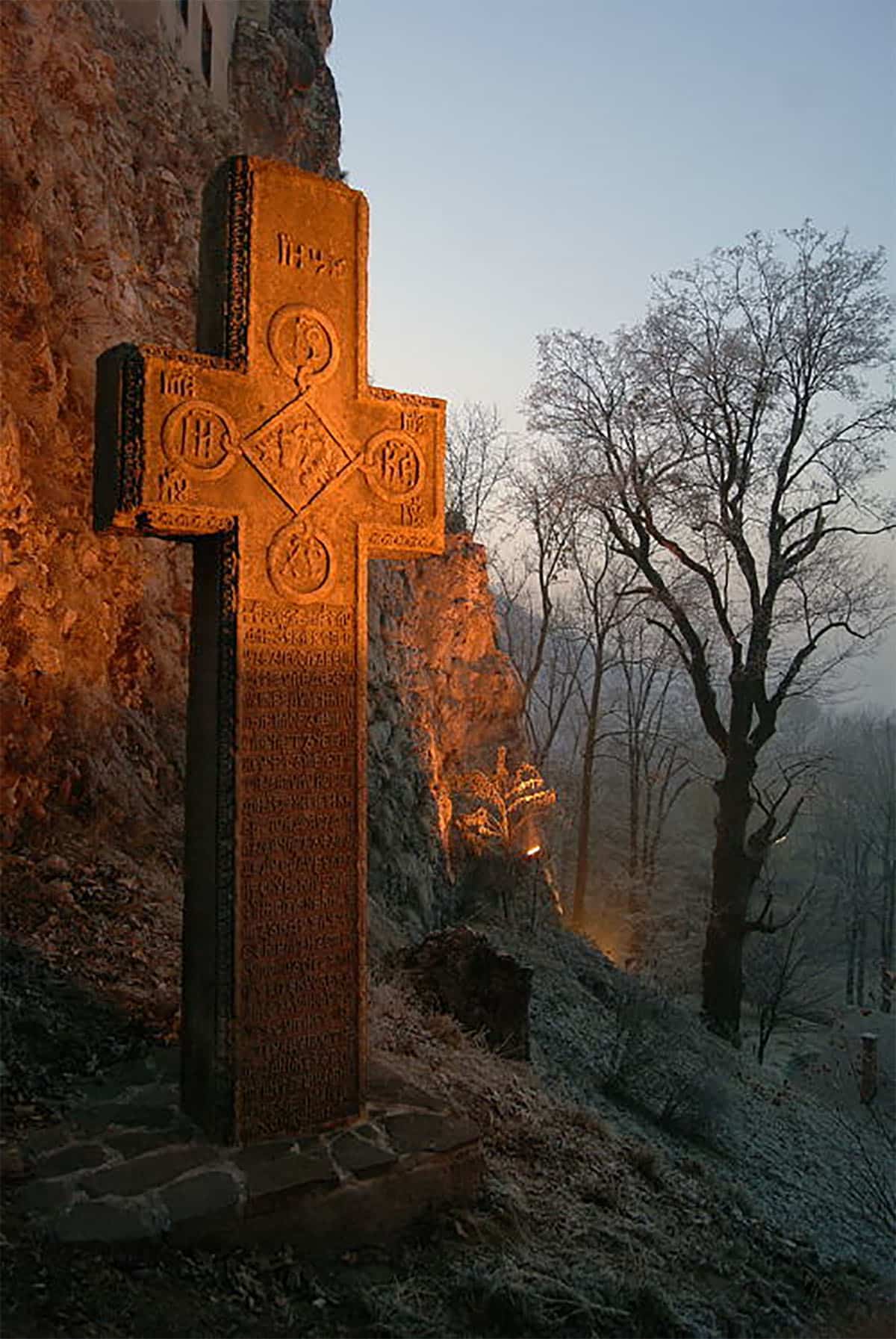 A dark stone cross with runic writing can be seen outside of Bran Castle.

In 1926, Queen Marie converted from Anglicanism and joined the Romanian Orthodox Church, while explaining she desired to be closer to her people.

However, she claimed in her later writings that a true path was the Bahá’í Faith. 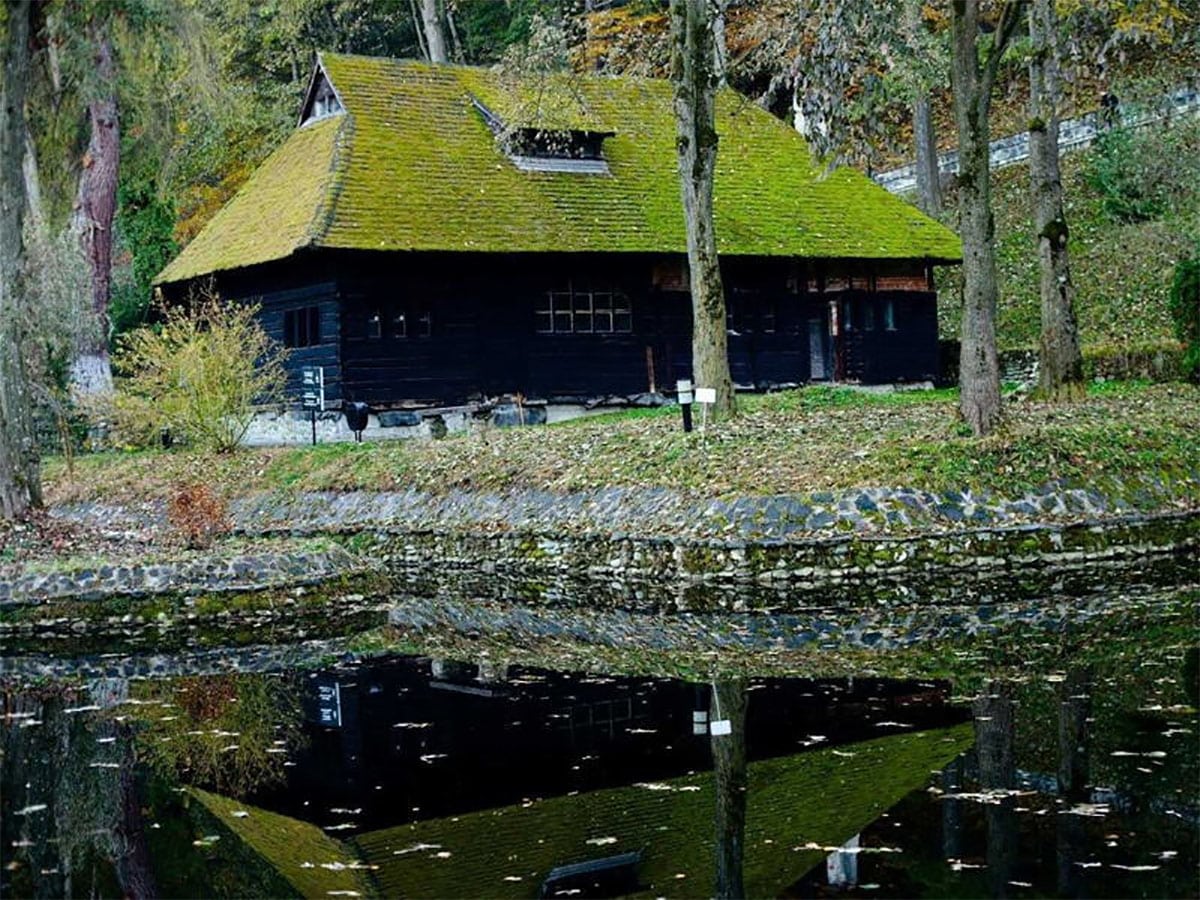 A black building with a moss-covered peaked roof and nestled among the many trees, shrubs Queen Marie had planted and set among a palatial garden at Bran Castle’s foot is the tea house where Queen Marie enjoyed her daily tea in this location. 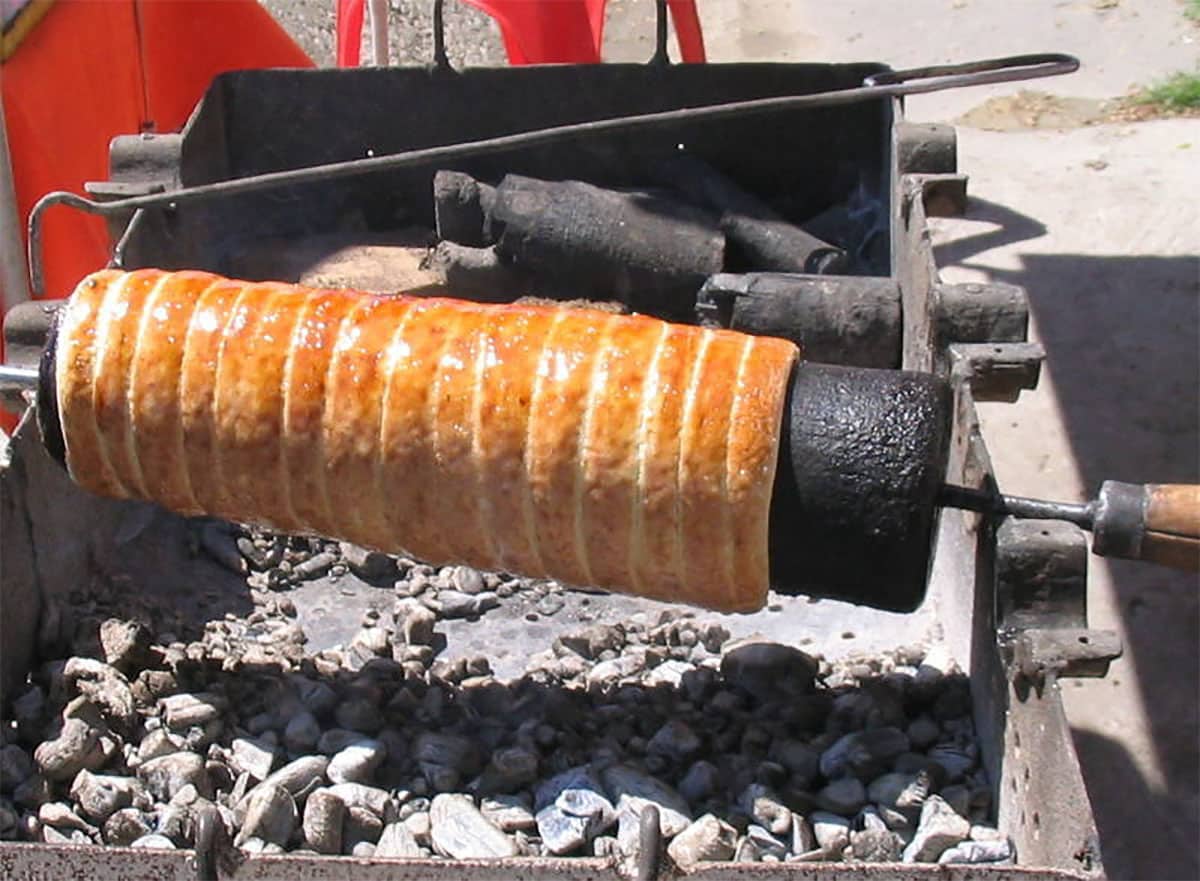 No trip up the mountain is complete without grabbing a kürtőskalács, and a sweet, yeast dough treat that is spun around a cone, rolled in sugar and baked over coals.

When finished, it can also be rolled in cocoa, nuts, or cinnamon. 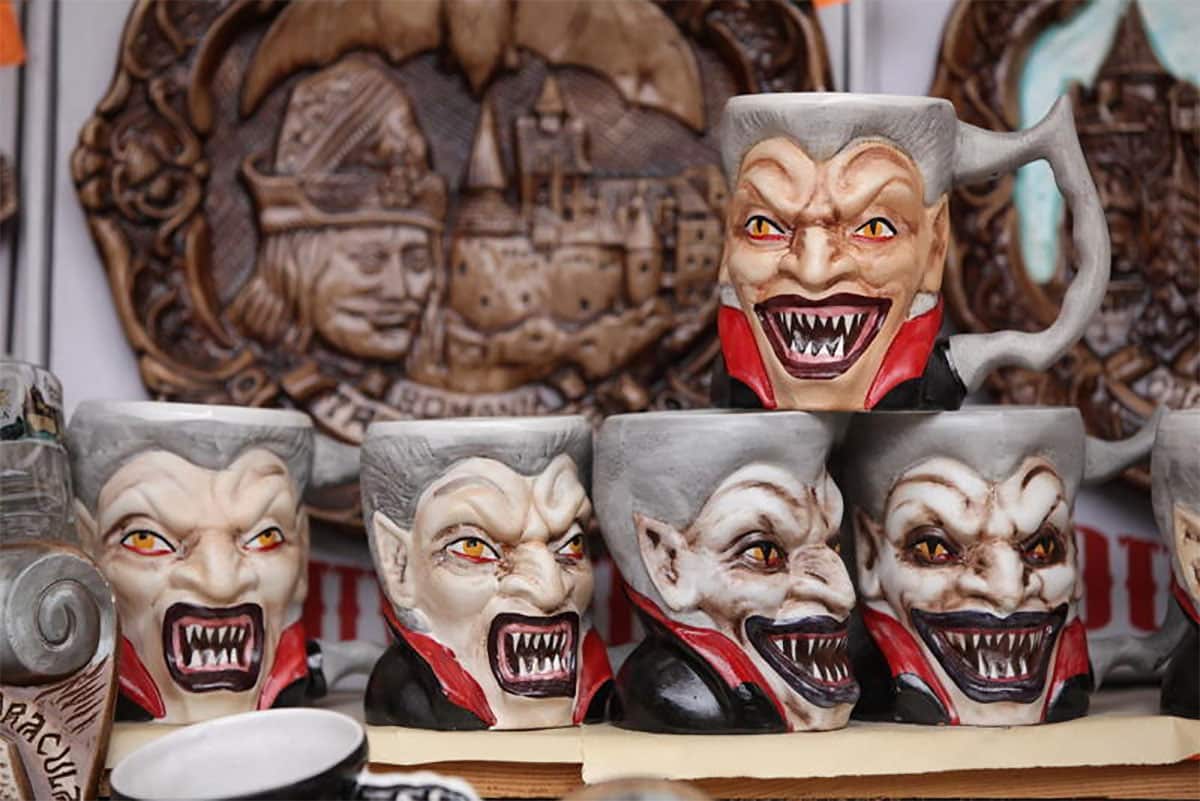 All thanks to the popularity of vampire movies, bands, and books, the village below Bran Castle earn a living from selling vampire related items.

Building off of the legend of Vlad Ţepeş and his status as a national hero, one can find vampire mugs, shirts, and posters.

The village even has a vampire-themed haunted house attraction. 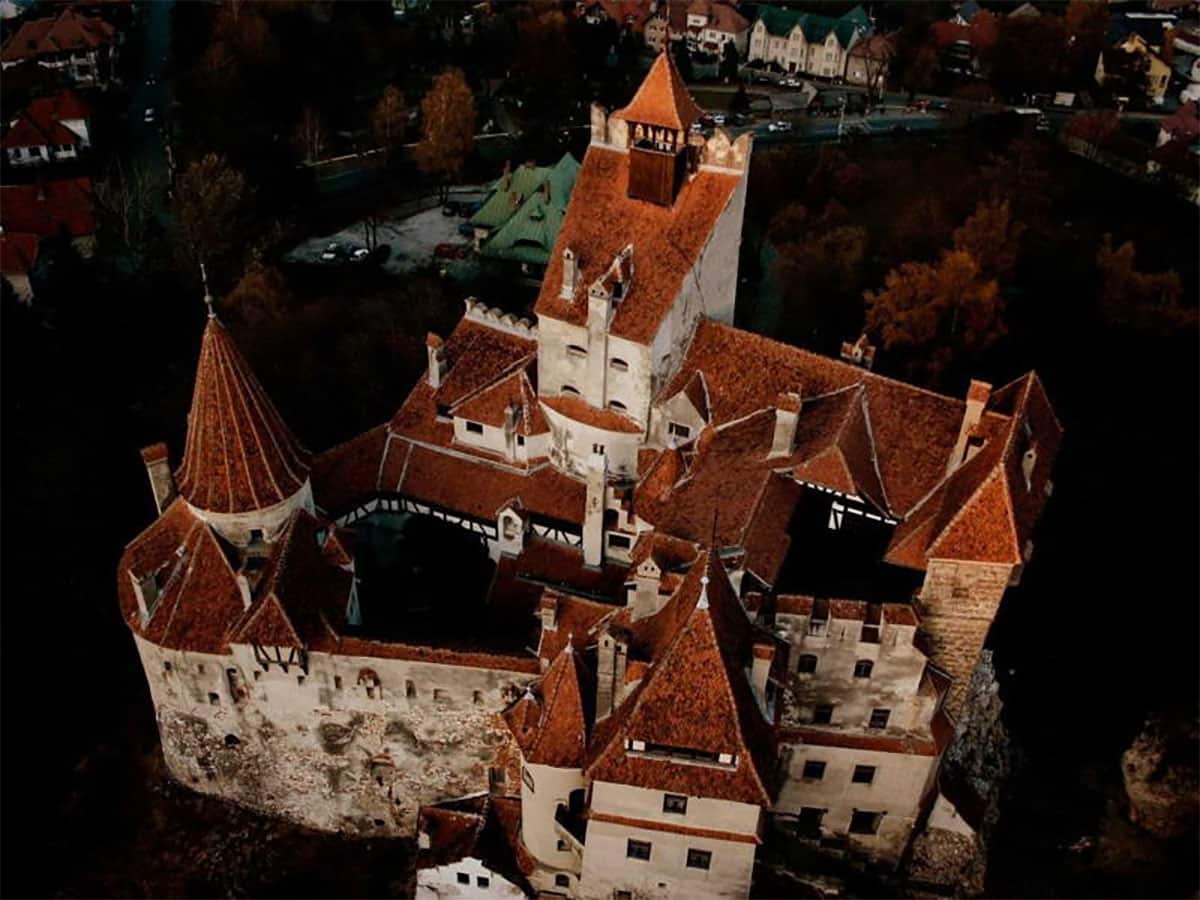 From being a fortress, to becoming a castle, to later being a royal residence and communist holding, Bran Castle has always held the reputation of Romanian heritage and fortitude, racking over 500,000 tourists annually.

A blend of local construction, medieval strategy, and creative ingenuity created an an icon of the culture of Romania: resilient, as well as proud and strong.

The rest was history after a vampire legend was included.