Despite the situation, ascendant horror writer Stephen King did not hesitate to put his pen into play in the cavernous old hotel at the foot of the Colorado Rockies.

In October 1974, the writer had gone to spend the night with his wife at the close of the season in the old hotel when he got the inspiration to write.

After eating a sumptuous meal in the grand yet empty dining room, King walked through the hallway to enjoy the winter’s looming cold. But what seemed like a casual walk soon became the genesis of another record-breaking novel.

The new novel King thought of while walking through the dining hallway soon became a reality when he later had a terrifying dream about his son being chased through the hotel’s halls.

When asked about his inspiration, he stated, “I got up, lit a cigarette, sat in the chair looking out the window at the Rockies and by the time the cigarette was done, I had the bones of the book firmly set in my mind.”

The book was titled The Shining Hotel. Not only did the book reintroduce the hotel to a new generation, but it also gave it a new birth.

Here are the uncovered eerie past and thrilling present of the hotel.

Stanley’s doctor had told him to seek the clean air of the West to cure his tuberculosis. So he traveled to Estes Park Colorado as instructed.

Fortunately for him, his trip paid off, and he became healthy.

Stanley fell in love with the vicinity and decided to visit the place every summer.

Later on, he acquired the land in the area to build a hotel, and in 1909, he completed the construction of the hotel.

The Earl of Dunraven, an Irish nobleman, visited the land where the hotel was built when he was on a hunting trip in 1872.

Soon after, he illegally acquired about 15000 of the surrounding acres and attempted to create a private hunting preserve.

However, his legal plans were prevented when the locals stood against him.

Before he left in 1884, Stanley purchased the land from Dunraven and built the hotel.

Stanley decided to name his hotel after the Earl of Dunraven by naming it, “The Dunraven,” but 180 locals signed a petition against the proposed name.

Many people have shared their experiences as regards room 407.

To date, many believe that the reason why the lights in the room flicker is because of Dunraven’s ghost, which keeps haunting the room.

Several people also claimed to have spotted ghostly faces in the room.

Years before the eruption of the hotel, Stanley and his twin brother, Francis, invented “Stanley Steamer,” a number of powered cars which made them wealthy.

Before the invention, they also sold their photographic plate company to Kodak, and that also increased their fortune.

While living up to his ideology against Payment on Delivery (POD), Stanley reportedly paid for his hotel’s construction in cash.

Many of the hotel’s original features, including its billiard room, veranda, and grand staircase, remain in place to date.

Stanley spent a lot of money to incorporate “class” and luxuries in the hotel.

Some of which include; a casino, an airfield, and a trap shooting range.

Stanley did not only erect a hotel for people of a certain class, but he also ensured to turn away people who didn’t measure up to the class he envisaged.

Even when the tourism industry crippled during WW1, Stanley would sit in the lobby and turn away “unsuitable” guests.

Despite the hotel being nearly empty, he kept the standard.

Decades before the hotel was renamed “The Shining Hotel,” notably the early 20th-century heyday, and the hotel hosted notable public figures.

From Theodore Roosevelt to John Philip Sousa to Emperor Hirohito of Japan.

The 1970s weren’t favorable to the hotel.

By the time Stephen King visited, the hotel had already felt the tolls of the hard times.

Things only got better when King published the novel, when a movie was released regarding the hotel and when new management moved in.

Those changes gave “The Shining Hotel” a new appeal.

Even though room 217 was haunted in the novel, it remains extremely popular with guests—especially guests who desire to have “the Shining hotel” experience.

Most times, it is booked months in advance.

One reason why many guests are fascinated with Room 217 is the history behind it.

In 1917, long before “The Stanley” was renamed “the Shining hotel,” Elizabeth Wilson, the chief housekeeper, decided to light the lanterns in the hotel when she felt that the raging storm might affect the electricity supply.

In an attempt to light the lantern in room 217, the lantern exploded and blew out the floor, thus causing her to fall down the story below.

Although she survived the fall, she broke her ankles.

Many believe that Elizabeth Wilson’s fall wasn’t natural. Paranormal investigators looked into the fall but had little to no result because media organizations kept reporting different names for the victim and different versions of the story.

With no record or picture of Elizabeth Wilson, some believed that someone in the room might have triggered the fall.

While Dumb and Dumber was filming at “the Stanley,” Jim Carrey requested to stay in room 217.

However, he checked out after three hours. Kevin Lofy, a former tour department supervisor, stated,

“That’s a shady one. What happened to him in that room, we don’t know. He’s never spoken of it.”

Putting aside the uncertainties of room 217, ghost hunters revealed that room 401 houses a ghost thief who moves around to steal guests’ belongings.

While many ghost hunters believe the room to be the most haunted, others think that the rumbling caused by the elevator above the room is sufficient to displace guests’ items.

Beyond room 401, ghost hunters revealed that the fourth floor is the primary site of paranormal activities.

They all claimed to have heard unusual noises and the giggling of children running around the halls.

Paul, the former maintenance officer who died while shoveling snow outside the hotel in 2005, is one of the most reported spirits.

Tour guides claimed to have seen Paul interact with guests during the late-night ghost tours.

Rather than rest in peace, Paul has refused to let go of “the Stanley.”

Guests enjoy watching the film adaption of The Shining in the hotel.

The hotel interiors (studio sets) shown in the film adaptation are not based on the Stanley.

Instead, they are based on several hotels across the country, notably the Ahwahnee Hotel (Picture below) in Yosemite National Park, California.

Guests who visit the Ahwahnee hotel often ask if it is the popular “Shining hotel.”

The film adaptation of the hotel didn’t use the Stanley as the shooting location due to the insufficient snow in Estes Park at the time.

Instead, Timberline Lodge (picture above) in Mt Hood, Oregon, was used.

To date, many people claim that the Lodge is actually, “The Shining hotel.”

In his adaptation of the book into a mini-series in 1997, King shot at Stanley.

With complete red lighting, the hotel has been hosting the Stanley Film Festival since 2013.

The festival is known to present a special event and showcase independent horror films.

As the players search, the game agents steer up the game by making players go through a story that involves cults, rituals, and different evil doings.

The Shining Hotel mainly lives up to its name as it hosts the annual Shining Ball around Halloween.

During this event, hundreds go in 1920s era costumes, exactly as those worn in the film.

A lot of people love to witness a haunted hotel experience.

The hotel draws a lot of people who want this experience with its four kinds of daily tours. Every year, tens of thousands sign up for the tours.

Some guests go to the hotel of the hotel’s basement, where the climax of the story takes place.

The “REDRUM” written on the attic door was written by a guest paying homage to the novel.

The staff liked enough to leave it there.

Although the hotel ballroom plays a horrifying role in “The shining,” the Stanley’s MacGregor (picture above) ballroom is notably used for weddings.

Asides that, ghost hunters claimed to have heard Flora Stanley, Stanley’s dead wife, play the piano in the room.

As ghost hunters claim to see the dead Mrs. Flora in the ballroom, guests and staff also claim to spot Stanley in the bar and billiard room. 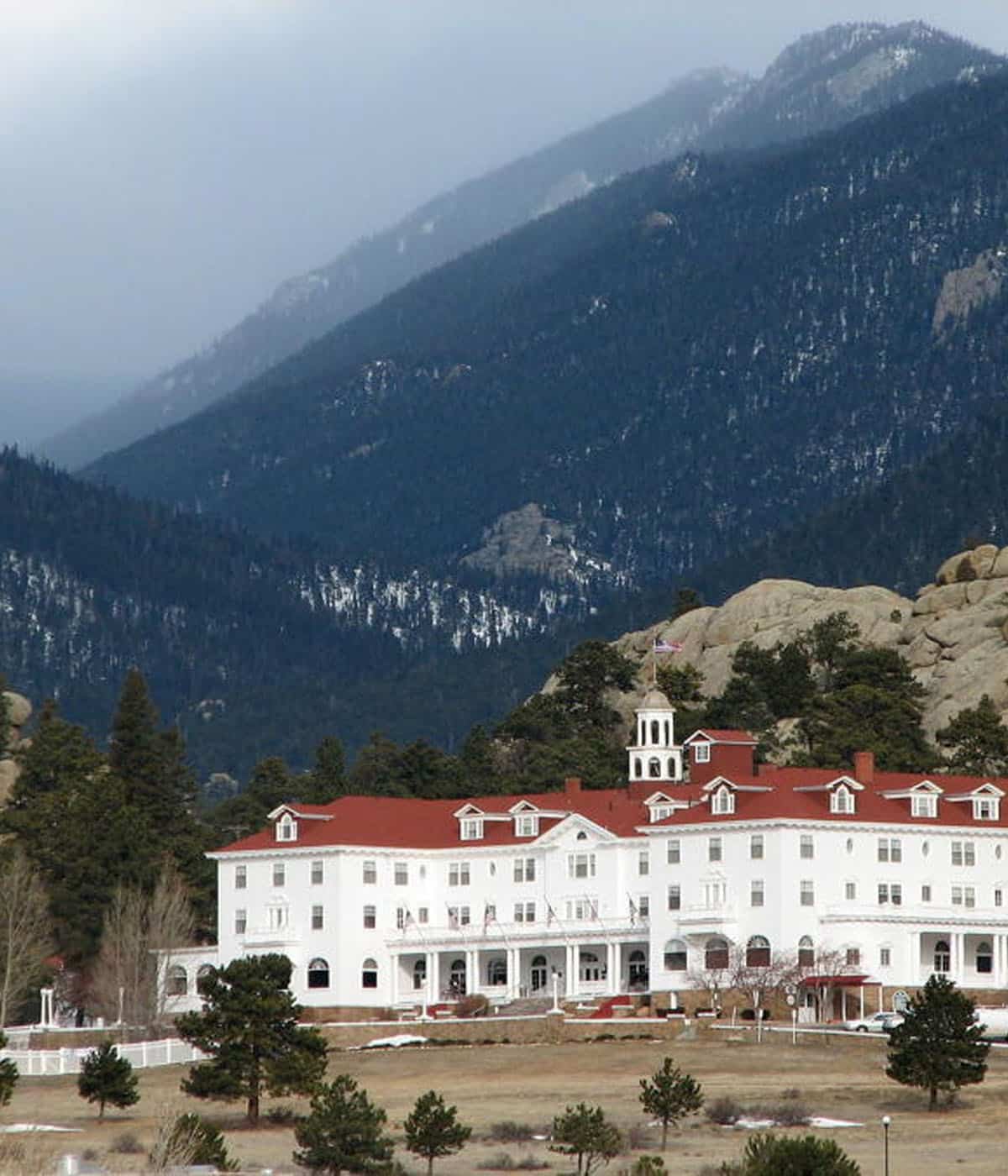 Despite the Stanley being outside downtown Estes Park (a perennially popular summer resort town close to Denver), both the novel and the film portray the hotel as a terrifyingly isolated place, far from civilization.

Although the settings portrayed in both the film and the novel presents a dark, evil, and horror view of the hotel, the real-life setting is filled with beautiful and welcoming design palette.

“The one thing people notice is we have a much lighter colouring than you would expect.”

Despite the film featuring a hedge maze, the hotel didn’t have one till 2015. The hotel’s 1600-foot maze was opened to the public in late June after the management fielded over 300 design proposals.

The hedge maze is one of the features that make the hotel live up to its name.