by Factionary 6 months ago1 month ago
79.8Kviews

Do you have a fascination with the unknown? Have you spent all of your childhood visualizing space and all the planets that inherit it? If so, you are in luck.

NASA sent the Juno probe back in 2011, and recently, it provided various pictures of Jupiter. These pictures left people in awe.

What Is The Juno Probe?

NASA had been working on a massive project for quite a while. The organization kept the production under wraps for several years. 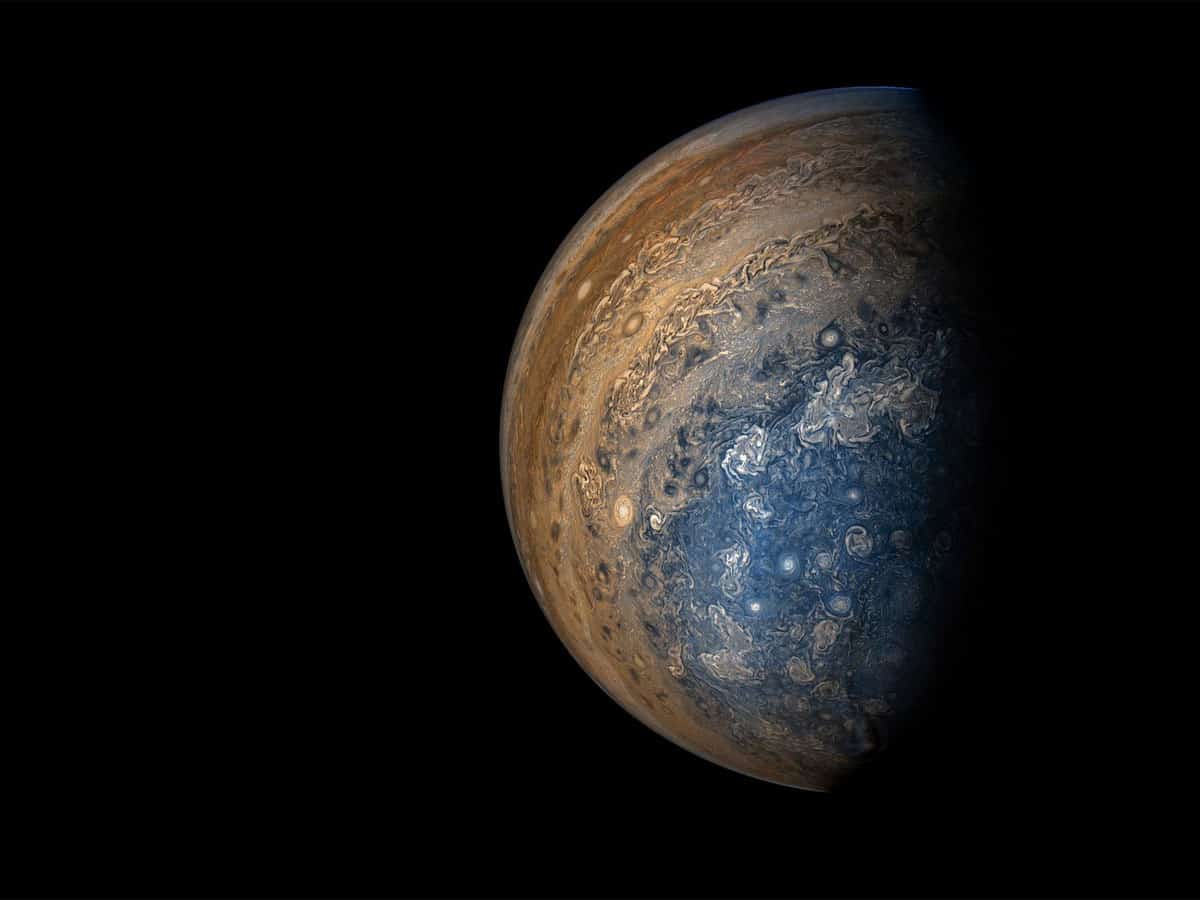 However, news leaked out before the project’s completion.It suggested that NASA was in the process of developing a massive space probe.

It caught people’s attention and sparked speculation about what purpose the space-probe would serve.

Fast forward to 2011, NASA announced that it created the probe to orbit the planet Jupiter.

Renowned aerospace corporation Lockheed Martin, built this behemoth of a ship, while NASA took care of its functions and operation.

Once the project was complete, the space administration announced that it planned to launch the probe on August 5, 2011.

The launch would be part of the much-awaited New Frontiers program.

After much anticipation, people finally got to see the airship depart.

It took almost five years for it to enter Jupiter’s polar orbit.

What Did NASA Intend To Do With The Spaceship

While the organization made it clear that it intended to land the probe in Jupiter’s orbit, people had other questions too.

Most of them wanted to know why NASA chose Jupiter of all planets for investigation.

It also wanted to look for clues to discover the planet’s origin, including whether or not its core is rocky, the quantity of water in its atmosphere, and the planet’s winds.

The probe is colossal and almost the size of a basketball court, which is one of the biggest reasons why it took so much time to reach its destination.

NASA intends to intentionally deorbit Juno into the planet’s atmosphere once it serves its purpose. 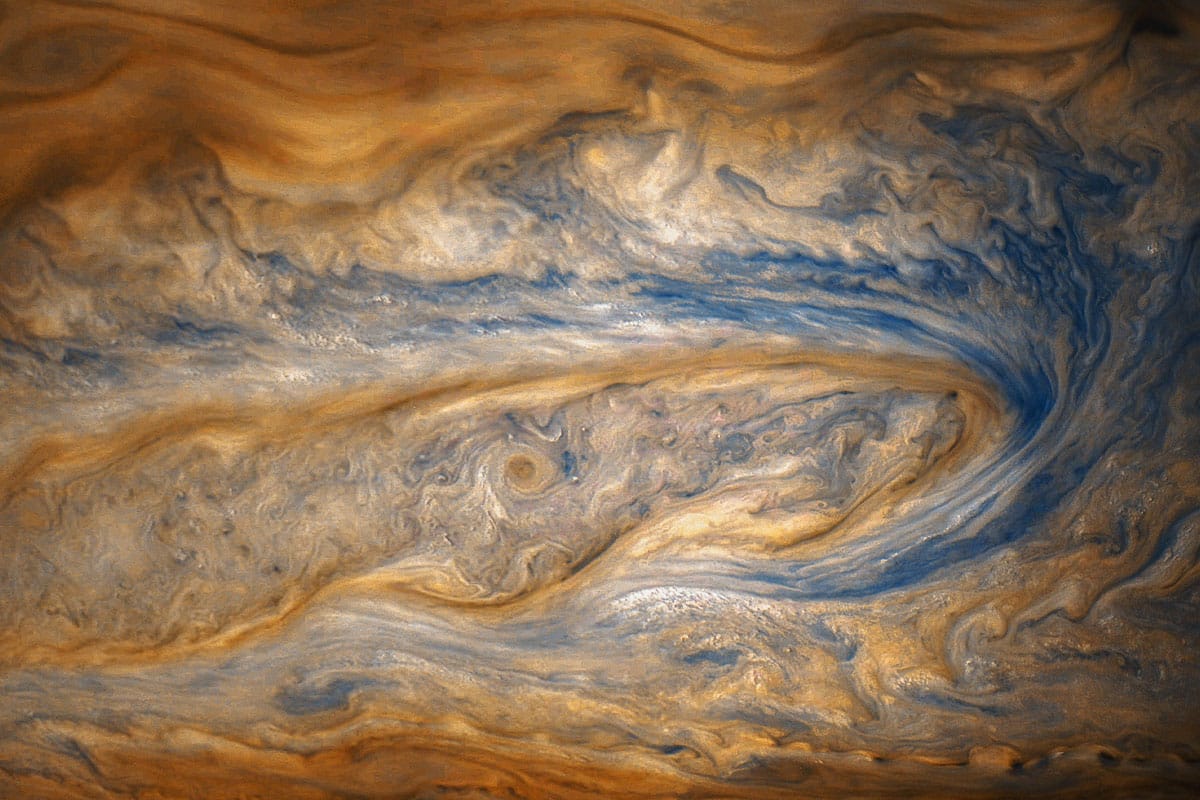 Is This The First Spacecraft To Orbit Jupiter?

Quite a lot of people are under the impression that Juno is the first-ever spacecraft to orbit Jupiter. In reality, however, it is the second. The Galileo orbiter was the first probe to land on the planet.

It orbited Jupiter between 1995 and 2003. There was immense outcry surrounding the Galileo orbiter because it was nuclear powered.

People thought that it would pollute space, which could directly impact life on Earth after some time.

Luckily, this probe is as safe as it gets, and considering the amount of time it took for NASA to create it, you can expect it to have excellent safety precautions.

What Were Juno’s Findings?

Right now, the probe is almost 420 miles away from Earth. It made its fifth flyby of the planet, and the photos it sent back are nothing short of breathtaking. 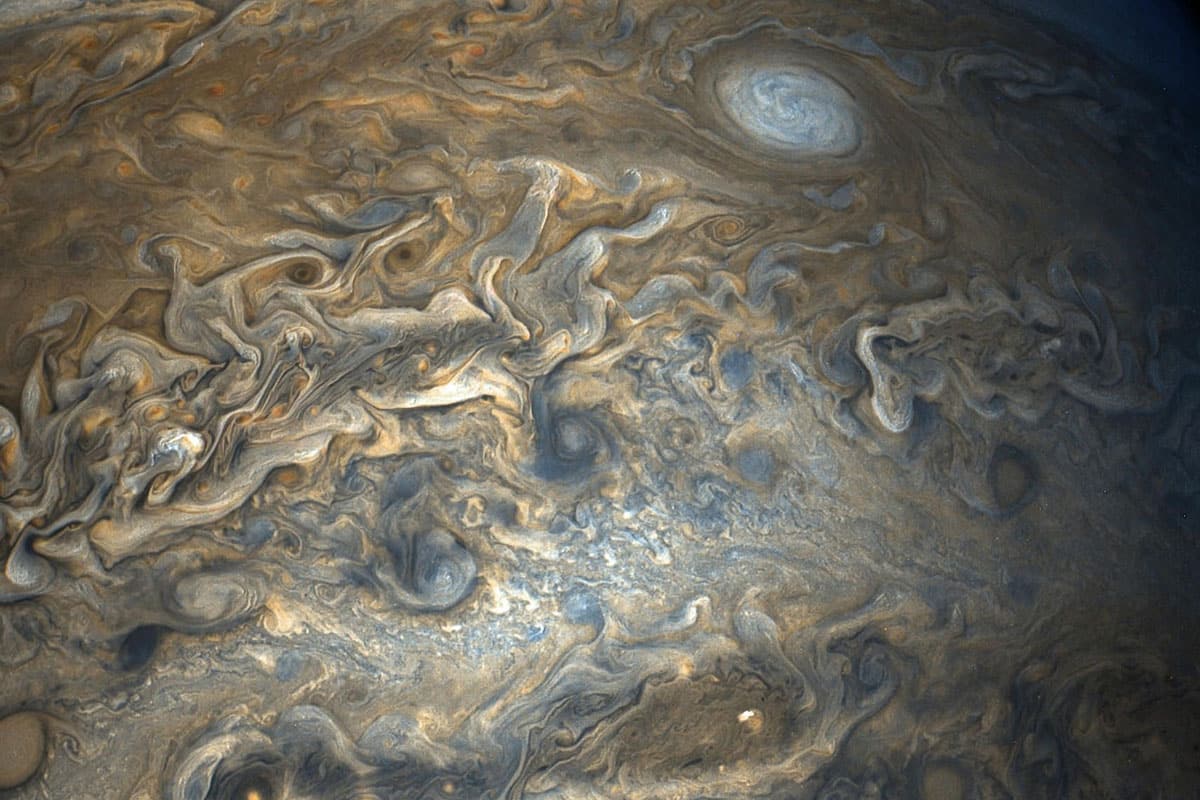 Scot Bolton, the principal investigator of the spaceship, stated that NASA learned new insights whenever Juno got close to the planet’s cloud tops.

While the pictures of these cloud tops were terrific, they also helped experts learn several other things about Jupiter.

So far, the aeronautics administration discovered how Jupiter’s poles appear.

They are quite different from other planets, and some even claim that they seem to be something right out of a fantasy painting.

That said, the experts continue to study the storms and swirling clouds that cover Jupiter’s atmosphere.

Surprisingly, NASA has been making all of the data that it receives from the probe, available to the public. 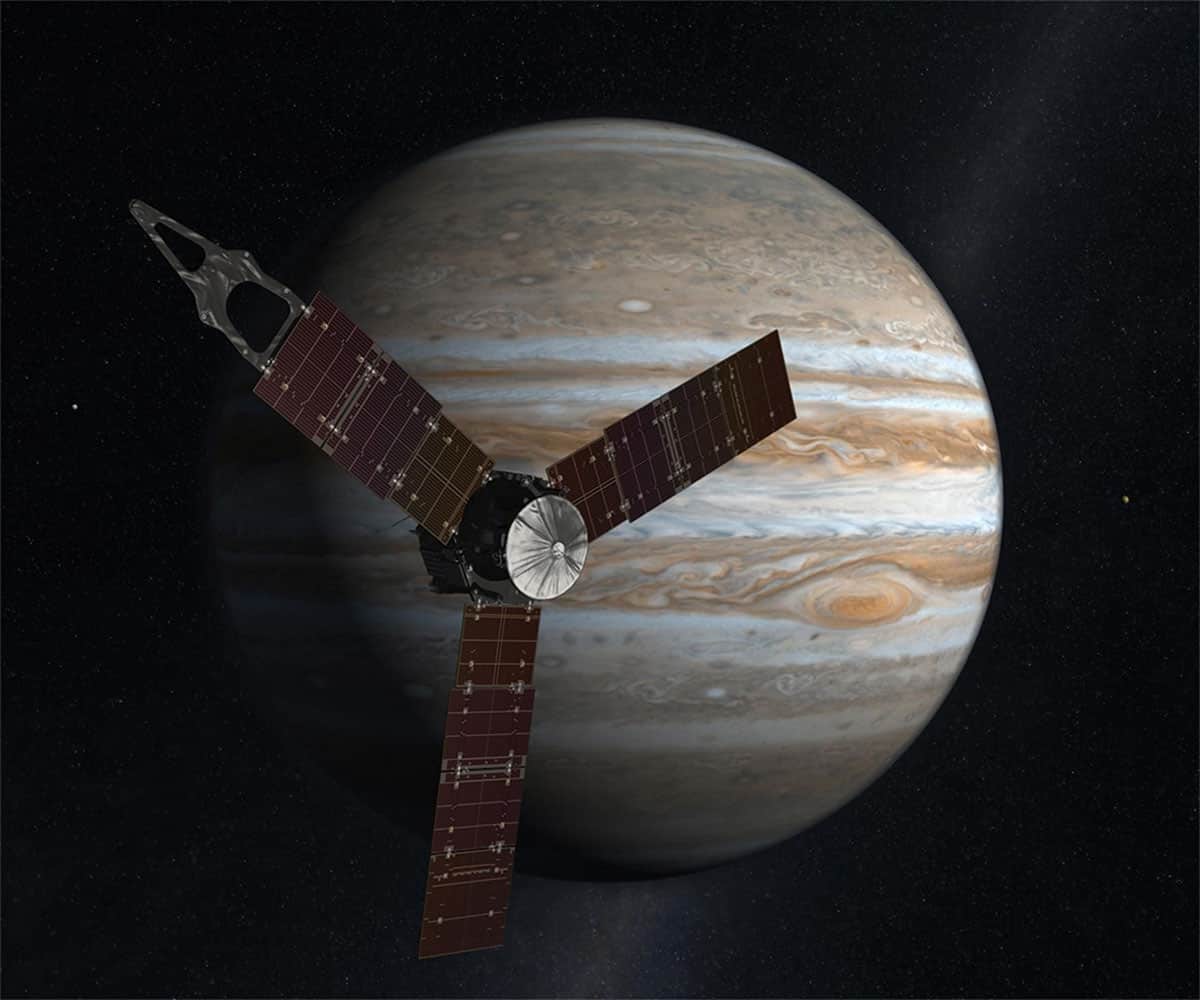 It proved to be an excellent decision as people are not only enhancing some of the unprocessed photos; they are also creating stunning images with the help of editing tools.

These stunning photos offer a perfect blend of art and science.

A lot of people have been using these images as wallpapers and screensavers, which further proves how beautiful the pictures are.

Can Juno Go Beyond The Cloud Tops?

The spaceship travels at a speed of almost 130,000 miles per hour.

Despite that, it will never get close enough to the cloud tops.

It remains nearly 2,700 miles away after using its maximum potential.

While this may seem far, the amount of data provided by the probe so far has been instrumental for scientists.

It allows them to correct their preconceived notions about giant planets.

Some of the data has even helped experts realize that the solar system’s origin could be more different than what they expected.

Juno uses perijove, a high-speed flyby that allows the probe to document Jupiter like never before.

The investigation has been ongoing since August 2016, and there seem to be no signs of stopping so far.

Scientists believe that there could be tons of data that they can still retrieve, which means that you can expect to see more images in the coming years. 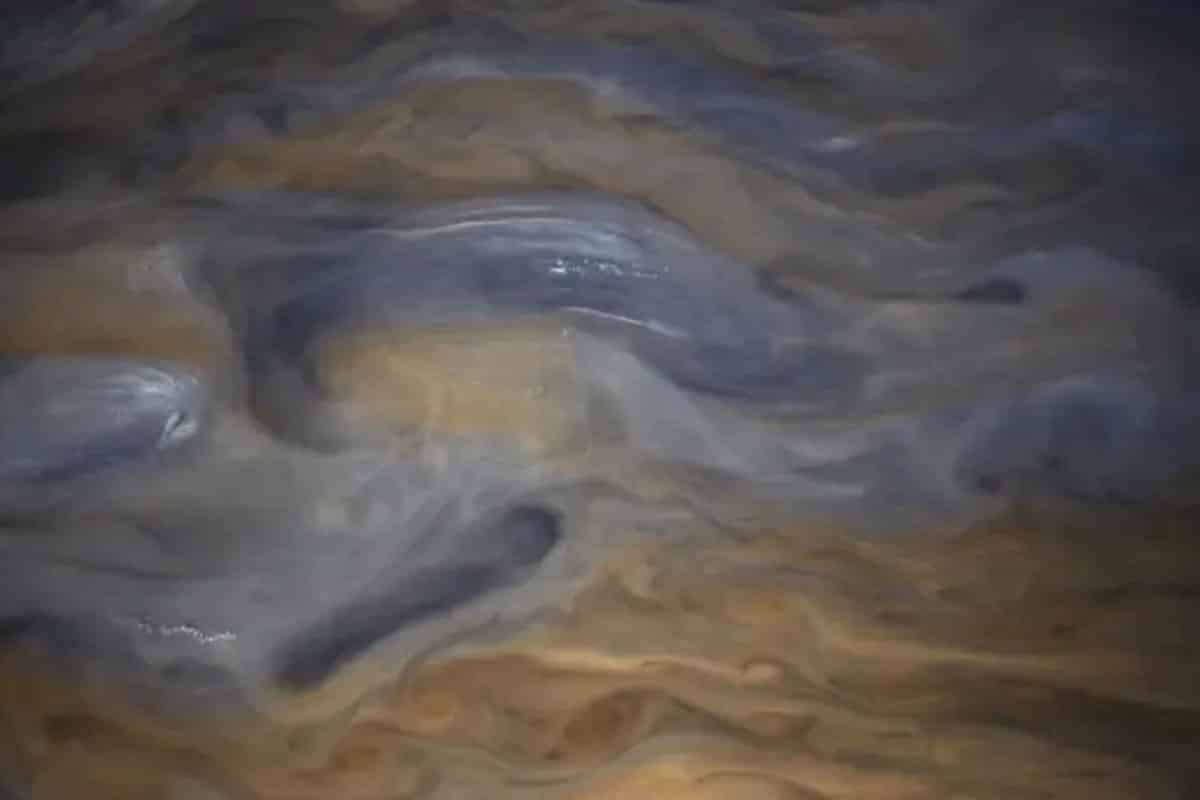 The credit for the beautiful images of Jupiter, however, goes to the optical camera known as Juno Cam.

The space administration uploads raw image data on its official website and social media accounts after every perijove.

Juno completed its twelfth perijove on April 1. People were quick to download all the black and white images provided by the Juno Cam.

As we discussed earlier, they manipulated these images and added stunning colors onto these images for everyone to see.

Each Image Provides A Unique Detail 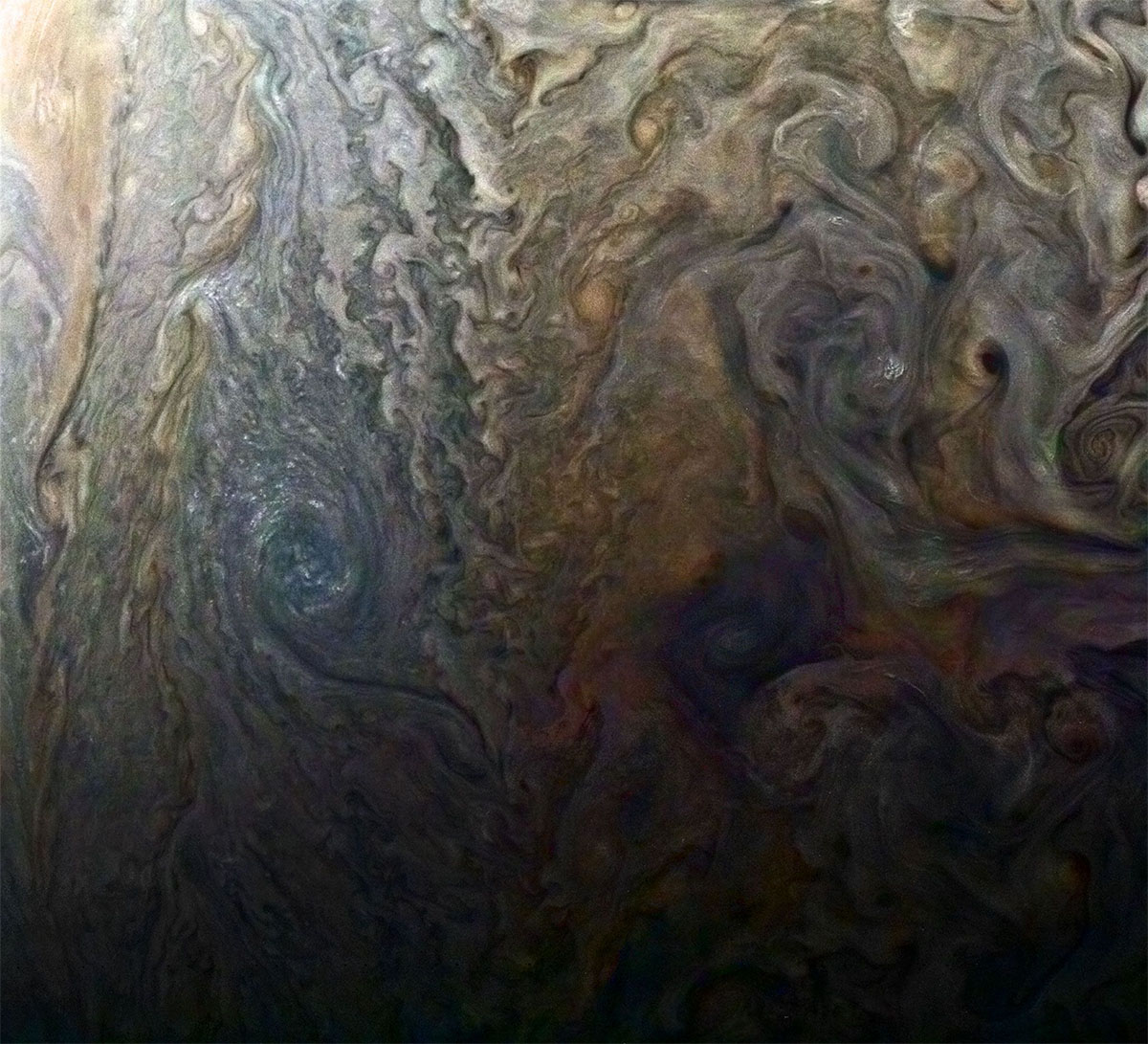 Since Jupiter is always in flux, each image that NASA receives has a unique detail. It allows them to observe the activity going occurring in the cloudscapes.

One of Juno Cam’s most prolific image processors, Sean Doran, stated that it could sometimes take hours to process a single image.

He also said that editing the image is not easy either, and just like processing, it could take several hours as well.