He gnarled and he roared as best he could to impress the audience already in awe of his fearsome appearance.

Meet Lionel the Lion-Faced Man, the sideshow freak tens of thousands of people paid to see during his carnival career, when he toured Europe and the U.S.

He was presented as a beast – half-man, half-lion – although he was was quite an intelligent man, no different from his contemporaries, except for his body covered in hair. Who was this Lionel and what do we know of his life?

Stephan Bibrowski, The Polish Boy Who Became A Circus Freak 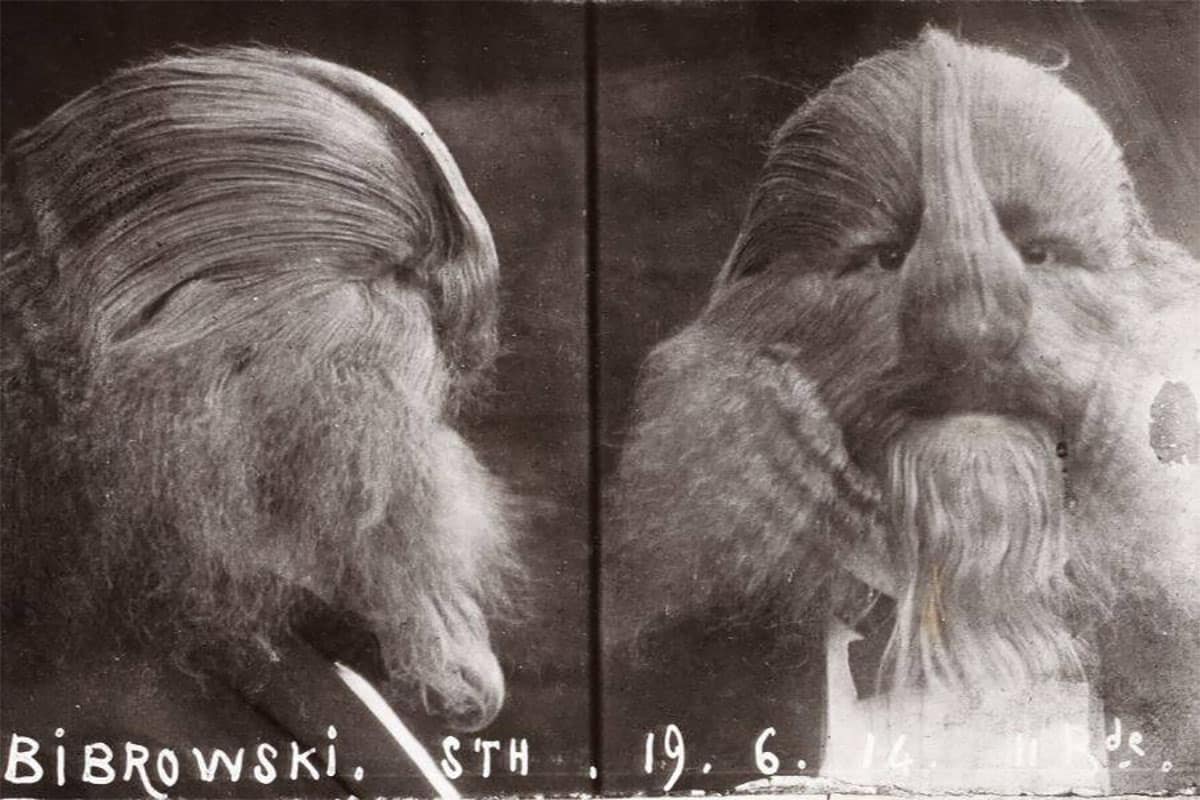 Unfortunately, little is known about the life of Stephan Bibrowski who rose to fame as the Lion-Faced Man.

Stephan was born in the town of Bielsk, in Poland, in 1890 and everybody was shocked to see the baby was covered with a fine one-inch hair all over his body, except for his palms and the soles of his feet.

Imagine the impression this unusual child made at a time when no one knew the baby had a medical condition we now call hypertrichosis, also known as the werewolf disease. Legend has his mother explained the child’s appearance by the fact that, during the pregnancy, she’d witnessed her husband being mauled by a lion.

At the time, people would believe such an explanation. Everybody knew a powerful shock or something odd a pregnant woman saw would leave an impression on the unborn child. Except there were no lions in Poland at the time, at least not in the wild.

Some suggest that the story was made up by Stephan’s handlers later on to give their prized freak an aura of mystery.

It is said the mother sold the boy to a German entrepreneur who saw the boy’s potential when Stephan was only four-year-old.

This might also be part of the well-crafted legend, as some reports indicate his family never gave up on the boy and he kept in touch with them.

Making Of The Lion-Faced Man

Stephan’s new master was a guy called Sedlmayer who came up with the boy’s stage name Lionel the Lion-Faced Man and started touring Europe with his little freak.

By the time the child started his career as a sideshow freak his hair had grown to at least eight inches on his face and about four inches over the rest of his body.

The boy’s excessive facial hair was combed with great care to make it look like a lion’s mane.

However, reports indicate this Sedlmayer guy did not treat Stephan like an animal and saw to it that the boy got an education.

In 1901, Sedlmayer took his young charge to the US, where sideshow freaks were a much bigger business than in Europe and he could make a lot more money by putting the Lion-Faced man on display, although, at the time, Stephan was just an 11-year-old boy.

Lionel the Lion-Faced Man soon became an attraction of the freak shows on the East Coast and the buzz created caught the attention of a scout for the Barnum and Bailey circus. 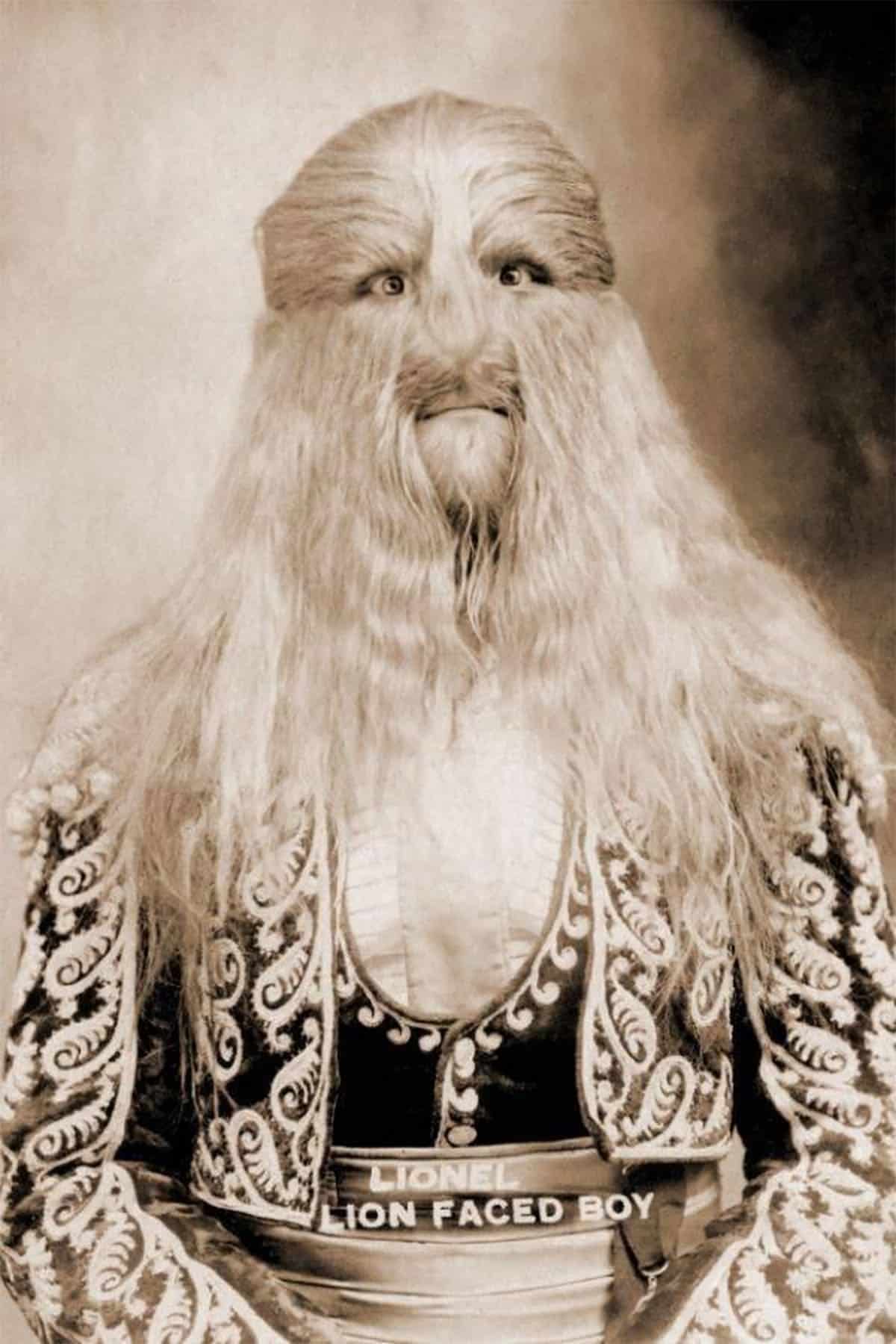 The legendary P.T.Barnum was so impressed with the boy he immediately offered him a seven-year contract and we can only assume the money went to Sedlmayer.

Lionel the Lion-Faced Man was just what Barnum needed to replace the aging Jo-Jo the Dogfaced Boy.

This Jo-Jo was a man called Fédor Jeftichjew, born in Russia in 1868, who also suffered from hypertrichosis, although Barnum callously presented him as the child of a savage found living in a cave. Lionel the Lion-Faced Man took over from Jo-Jo as the resident wild creature.

Barnum and Bailey had a whole menagerie of freaks at the time, which included people with various deformities, the fattest man/woman in the world, giants that towered over midgets, and, of course, people of exotic origins displayed in their native costumes.

The competition was stiff and it was hard to become the main attraction of the sideshow. Looks were not enough, no matter how odd or terrifying.

During his years with Barnum, Stephan Bibrowski performed acrobatic numbers and scared the audience with his roars. That didn’t go too well presumably, as later on, the approach changed.

Lionel the Lion-Faced Man presented himself impeccably dressed, to create a sharp contrast between his wild appearance and his gentlemanly manner. Sort of the animal that can talk.

Lionel was encouraged to talk with members of the public and it must be said that Stephan spoke five languages at the time, four more than the vast majority of the crowd.

Aside from the occasional roar, he was gentle, which made him a huge favorite with women and children.

A Man With A Dream?

So far, the extraordinary life of Stephan Bibrowski appears to be one of exploitation and constant humiliation. However, the few surviving accounts of the era speak of a man who enjoyed his career. 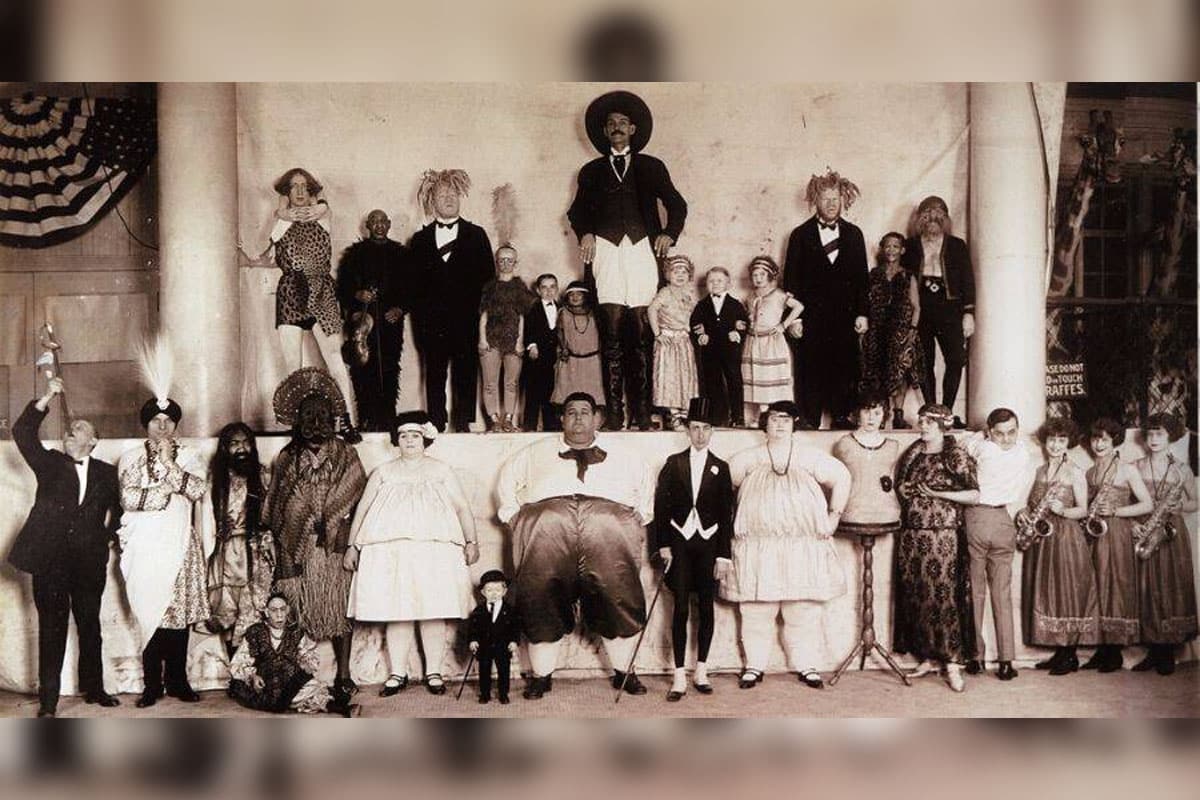 Not that he had much chance of leading a normal life at the time. He has passionate about literature and once said he would have liked to become a dentist.

Stephan probably longed for a normal life, but at the same time was somehow proud of who he was.He was very afraid of fire, as that could easily destroy his fine coat of hair and then he would be “just an ordinary man”.

At the same time, he enjoyed a great degree of independence. After his contract with Barnum expired, Stephan Bibrowski went back to Europe and partnered up again with old Sedlmayer, which proves he did not resent the man who made him a circus freak.

It is said that during his stay in Europe an unfortunate fire incident did happen and the Lion-Faced Man had to take some time off until his mane grew back.

Stephan exhibited himself in Berlin and toured Europe, before returning to the US.

He sometimes performed with the Barnum circus, but then settled on Coney Island where he appeared at a sideshow pop-up.

By the end of the 1920s, Lionel the Lion-Faced Man retired from the circus world and returned to Germany.

He died in 1932, in Berlin, of a presumed heart attack, although there were rumors he might have been killed by the Nazis who were rising to power and who were well known for their campaigns to exterminate people with mental or physical disabilities.

He was only 41 years old at the time of his death and no one cared what happened to a certain Stephan Bibrowski. If he wasn’t Lionel the Lion-Faced Man anymore, he wasn’t interesting anymore.