by Factionary 1 month ago4 weeks ago
278views

It is a general belief that a body will only rest in peace if it is properly buried.

Well, this belief seems to be true as many people have openly revealed that the souls of the casualties of the American Civil war, who weren’t buried, have remained on the haunted field of Gettysburg.

Amongst the conflicts of the American Civil war, the Battle of Gettysburg was known as the most gruesome the country has ever experienced.

Not only did the battle record over 50,000 casualties, but many of those casualties also weren’t buried.

The Battle between the Confederacy, led by Army General Robert E. Lee and the Unions Forces, cost America 51,000 casualties.

War records revealed that the Confederate Army’s battle miscalculations led to a total loss for the confederacy and massive loss of lives.

However, only some of the victims of the war were given a proper burial.

The casualties were so much that many were left on the battlefield.

While it seemed that the war had ended, it hasn’t ended for so many as locals and visitors reported to have seen ghostly sightings of dead soldiers.

In some cases, the ghosts were captured on camera.

As of September 2020, Greg Yuelling claimed to have seen two ghosts at Gettysburg.

The Bloodbath At The Battle Of Gettysburg

While still riding on the victory at Chancellorsville, Army General Robert E. Lee led his army through Pennsylvania to launch an attack on Union Forces.

However, his army lost the conflict due to a combination of ineffective war strategies and faulty intelligence.

The Battle, which lasted for three days, led to the outright killing of 8000 men but a huge victory for the Union forces.

However, the experiences at the Battle were so bad that Gettysburg was termed “harvest of death.”

A New Jersey Soldier, while recounting his experience, revealed:

“Some with faces bloated and blackened beyond recognition lay with glassy eyes staring up at the blazing summer sun; others, with faces downward and clenched hands filled with grass or earth, which told of the agony of the last moments…”

“Here, a headless trunk, there, a severed limb; in all the grotesque positions that unbearable pain and intense suffering contorts the human form, they lay.”

Other survivors revealed that the bodies of men and horses reeked in the sun for days.

About 3000 horse carcasses were burned, and human bodies were buried during the war.

But despite the effort made to curb the stench of the casualties during the war, people in charge couldn’t keep up with the death count as they kept increasing.

Even so, some of the corpses were reburied at the newly built National Military Park Cemetery, but many couldn’t make it to the cemetery.

The bodies left were so much that remains of casualties were still uncovered over 130 years after the bloodbath.

At a time, talks of mysterious figures only functioned in the subconscious part of locals and visitors. 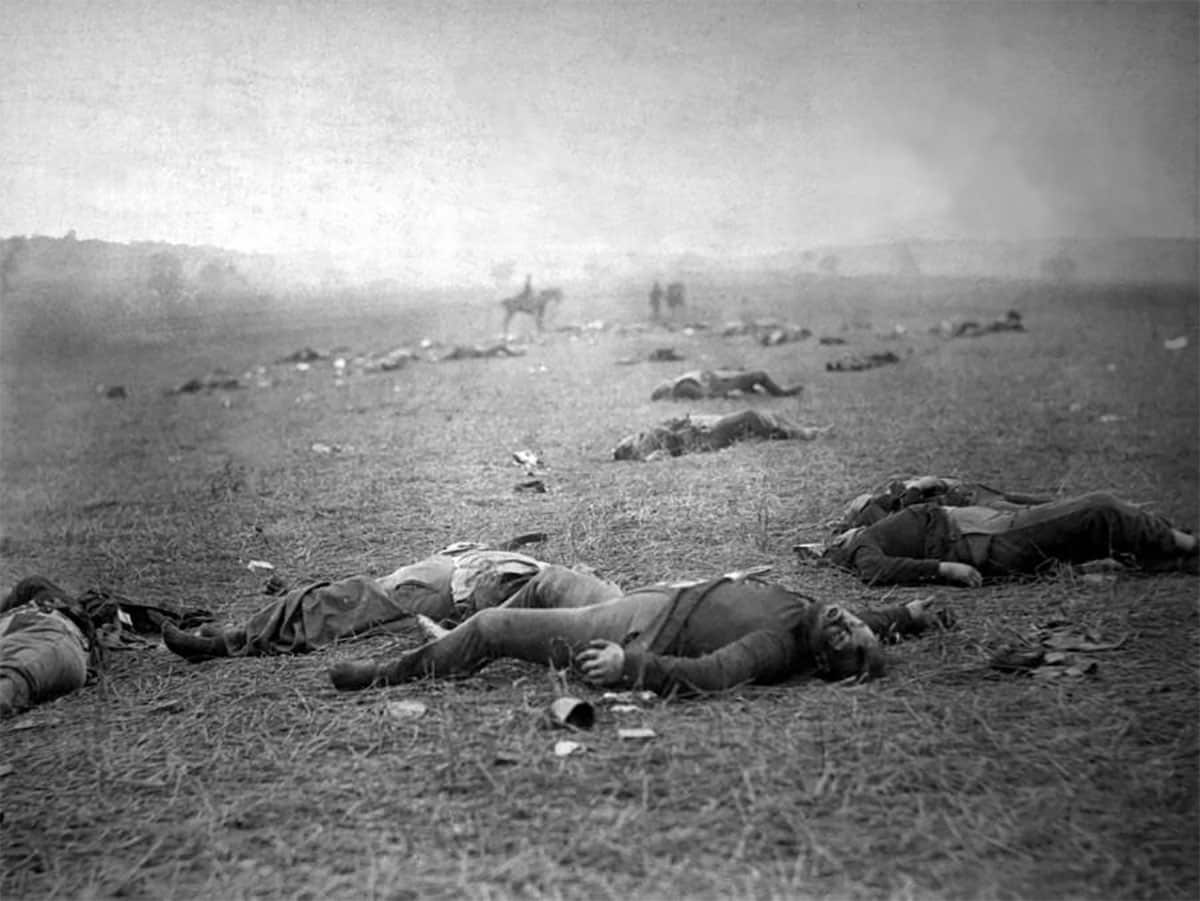 However, the talks have made it to the conscious state of people, thus causing many to attach a supernatural flair to the town.

With claims of dead soldiers roaming the street, some have also strangely claimed to have seen the ghost of the Confederate Army Leader.

The claim was considered strange because the army general died peacefully at his home, years after the bloody war.

Ever since the claims have spread, visitors, thrill-seekers, and even ghost hunters have made Gettysburg a destination center, especially the historic Gettysburg field.

Alongside other encounters, the owner of the Cashtown Inn, Jack Paladino also stated to have captured the vague photographs of a soldier who had died in the inn.

Jack Paladino and his wife also recounted how guests in the inn had reported strange activities like thumping doors, flickering lights, and unexplainable locked doors during their stay at the inn.

Even so, some of the corpses were reburied at the newly built National Military Park Cemetery, but many couldn’t make it to the cemetery.

After the investigation, the paranormal investigators confirmed the appearance of ghosts in the hotel.

Asides others, they notably stated that the spirit of union soldier James Culbertson of Company K under the Pennsylvania Reserves also roams the hotel.

The Daniel Lady Farm, which was used as the field hospital of the Confederate, is still notably haunted by dead soldiers.

Eyewitnesses claimed to have seen the ghosts of General Isaac Ewell, and his corps of 10000 haunts the farm.

Greg Yuelling’s sighting was the most independent and viral sighting anyone could have had. 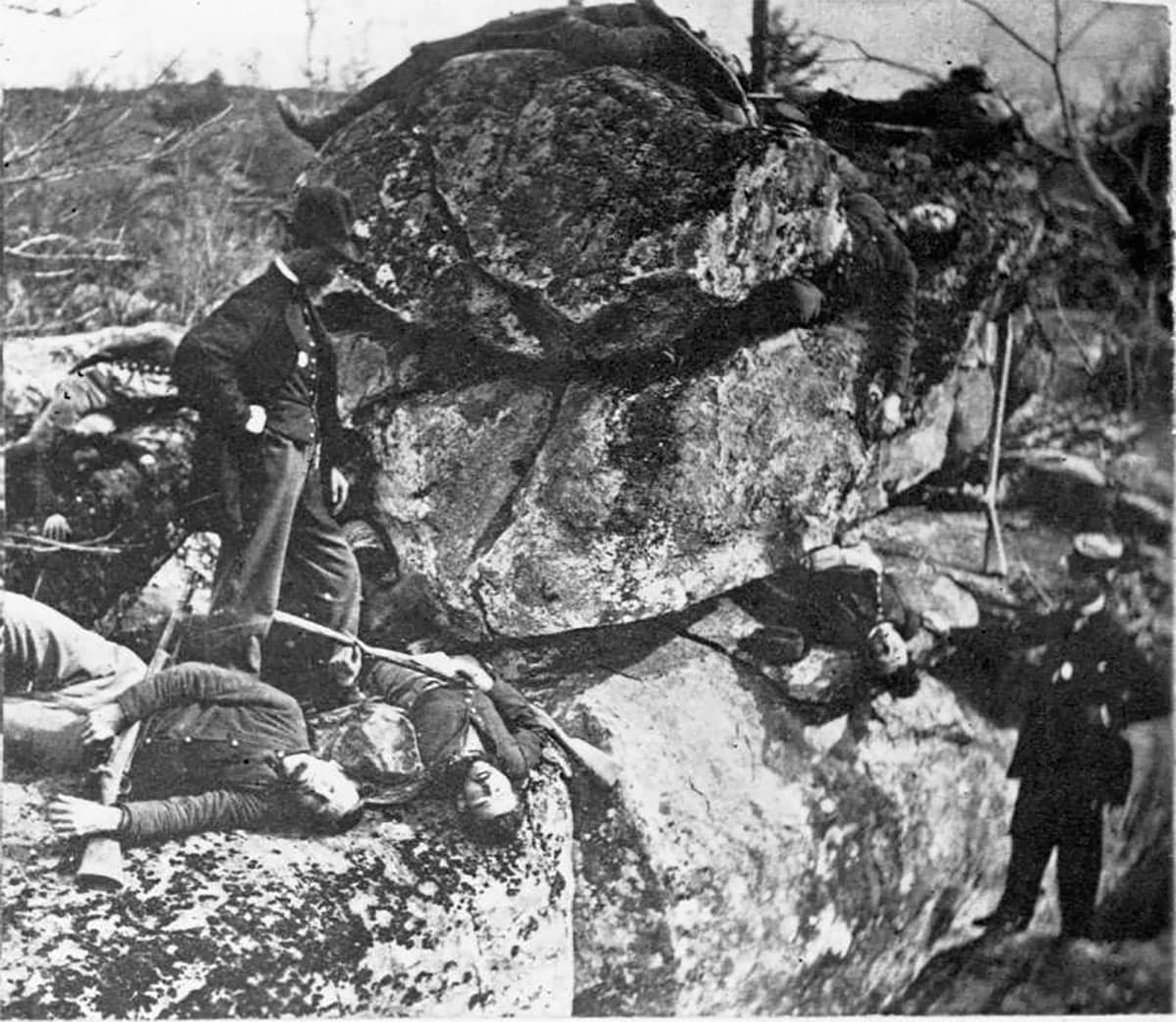 While sharing on social media, Yuelling stated that he was driving with his family through the battlefield at night when he spotted two soldiers crossing the road.

In an interview with The Sun, Yuelling stated:

“It was scary. It was crazy…I couldn’t go to sleep.”

Prior to this experience, Yuelling didn’t believe in ghosts.

Instead, he thought that the brain is only working with what people have in mind.

To him, people claim to have seen ghosts because their brains tried to make out something with the information given.

But since his experience, Yuelling stated that he was convinced about the existence of ghosts.

While some considered Yuelling’s account to be real, others have considered it to be unreal.

But whether it is accurate or not, nothing changes the fact that the bloodbath at the field of Gettysburg has given us a more realistic perception of the supernatural.

Much more, it is a clear revelation of the number of people who died on the battlefield and the possibility of thousands of trapped souls.