Although they mostly live in water as deep as 1000 feet, they frequently move to shallow water during the mating season.

If you are a gaming fan, you might recognize this giant crab from Animal Crossing Video Game. Even though huge in size, many Japanese like to devour this giant sea creature on their special occasions. 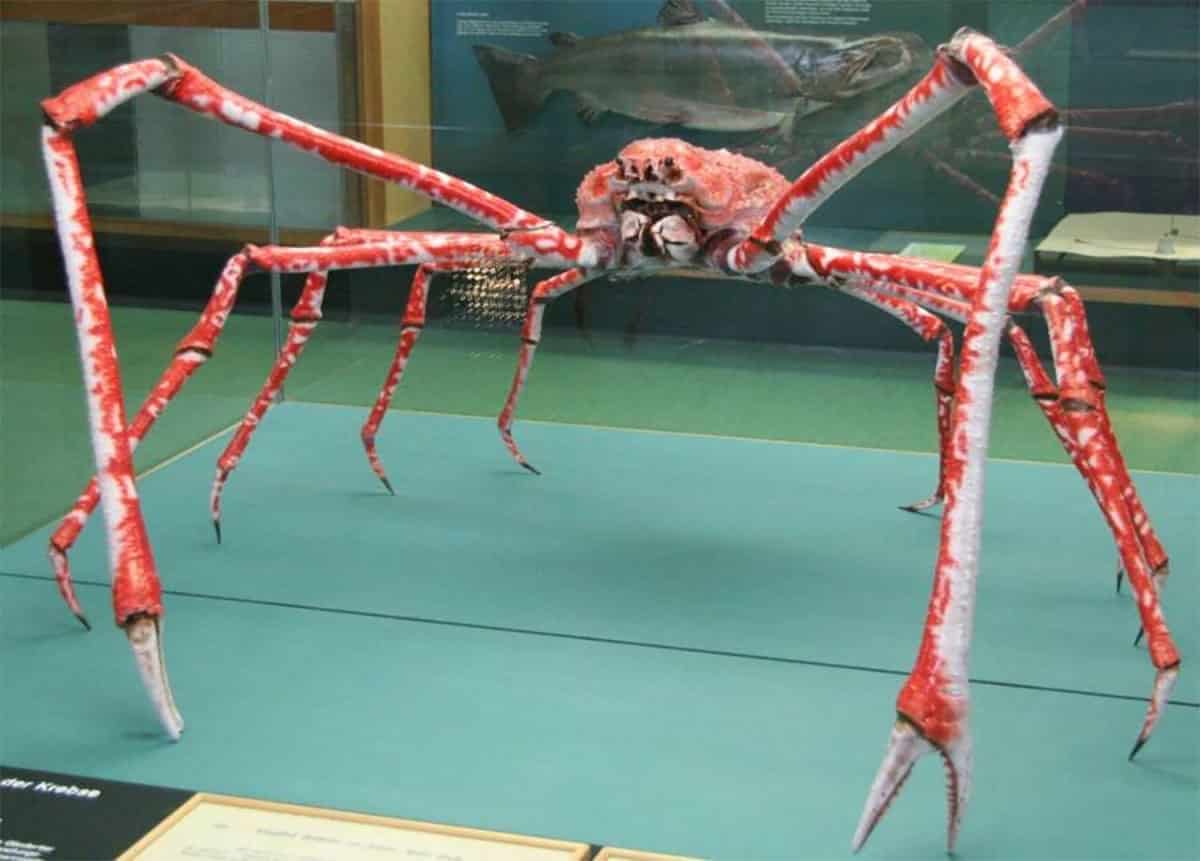 The History Of The Giant Crab

The origin of this spider crab dates back to a hundred million of years to prehistoric times.

Some researchers discovered the fossils of the oldest spider crabs in the parts of Northern Spain in the year 2013. This proves the fact of how long these giant spider crabs date back.

The fossils that were found by the researchers were of ancient spider crab known as Cretamaja granulata. These creatures existed a hundred million years ago

As opposed to the current giant spider crabs, who are the descendants of C. granulata, they were quite small in size.

They were so small that they measured even less than an inch! Even though the ancestors were quite small in size, they possessed some of the characteristics that can be found in the giant spider crabs these days.

Their descendants, the Japanese crab were first recognized in the year 1836 by a Dutch Zoologist.

The crab’s bright orange color, limbs, and legs caught the attention of the zoologist who described the creature as quite impressive.

He also stated that these unique features of the giant crab were more than enough to lock its enemy in its claws and cause injury to them.

The scientific name of the crab known as Machrocheira Kaempferi was given to it by a German physician and naturalist who went to Japan to study plants during the seventeenth century.

The Crab With The Longest Life

Apart from being the largest crab in the world with legs as long as 13 feet, this Japanese crab on average weighs up to 40 pounds.

With a lifespan of more than a hundred years, it lives the longest as compared to other crabs and sea creatures.

Is The Largest Spider Crab Of The World The Heaviest Arthropod As Well?

The largest spider crab of the world with legs that can extend up to 13 feet lives the longest as well.

But, is the largest arthropod in the world weighs the heaviest as well or not?

Even though the giant spider crab can weigh up to 40 pounds, they are not the heaviest arthropod in the world.

They lose their top rank to American lobster in comparison weight who easily outweigh them.

The Diet Of These Giant Spider Crabs

These giant spider crabs were given the nickname ‘The Dead Man’s Crab’ by the Japanese folk because they are supposed to feed on the sailors and the divers.

This is why the Japanese fear this monster so much. While it is true that they do feed on the corpses, they do not commit any killings to fill their appetite. 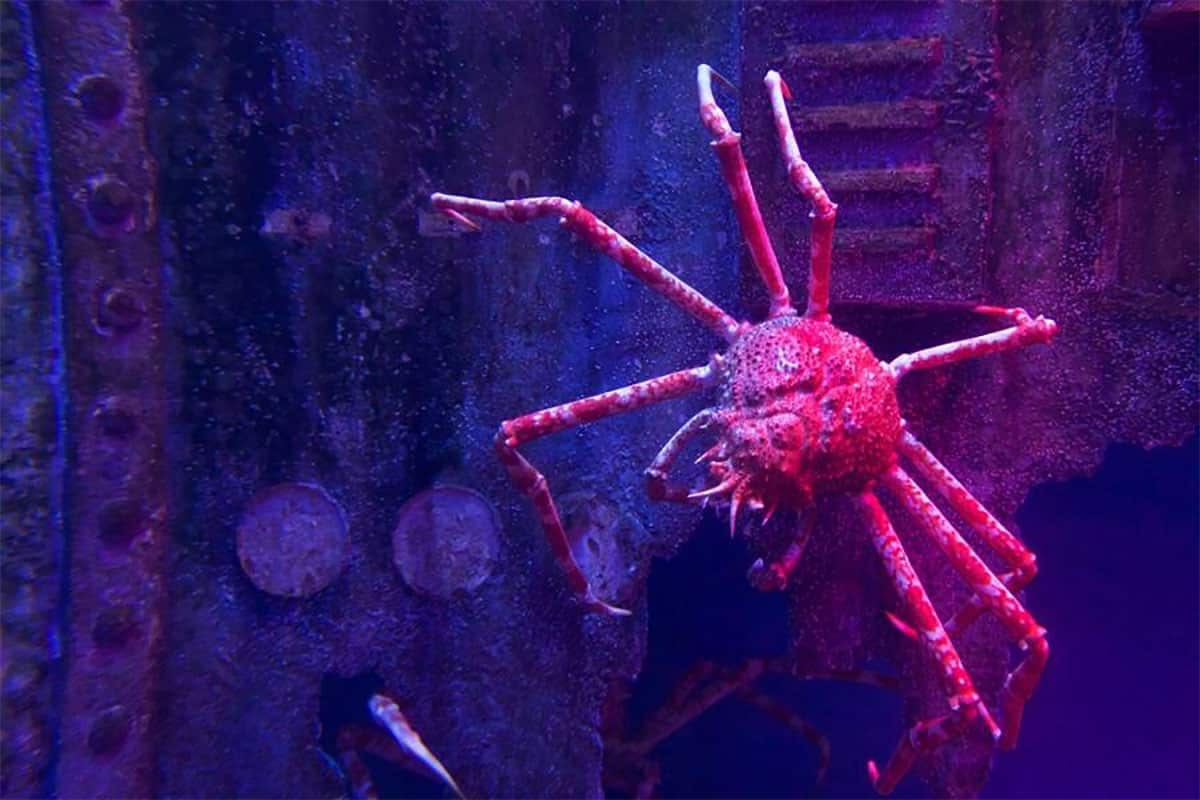 Thus, they are not the monsters or the ‘Dead Man’s Crab’ after all as described by the Japanese folk.

The Biggest Japanese Spider Crab Of The Decades

In the year 2009, a giant spider crab was caught that was considered the largest and the heaviest Japanese spider crab of the decades.

The crab weighed around 44 pounds and had legs as long as 12 feet. This justifies the name ‘Crabzilla’ given to this forty-years old giant spider crab.

The crab was displayed for people to see at a sea life aquarium in the Netherlands. Later, the crab was moved to France where people can still see this giant spider crab.

The Softer Side Of The Giant Spider Crab

Its outer appearance may give the impression of being a strong and terrifying sea creature that can finish its enemies just by a blow, it is not completely true.

Since their legs are quite big in size, they are prone to breakage because of being lanky.

This is why many of the spider crabs that are found by the people are reported to have at least a limb missing. As the giant sea creature matures with age, they get more vulnerable.

The molting process is extremely dangerous and takes weeks to be completed.

Many times, their heads get stuck in their previous shell or the other crabs eat them while they are vulnerable during the process. This is why the molting process can even result in their death.

How Do They Protect Themselves During Molting Season?

In order to survive, these giant spider crabs need to protect themselves from the other crabs and sea creatures. 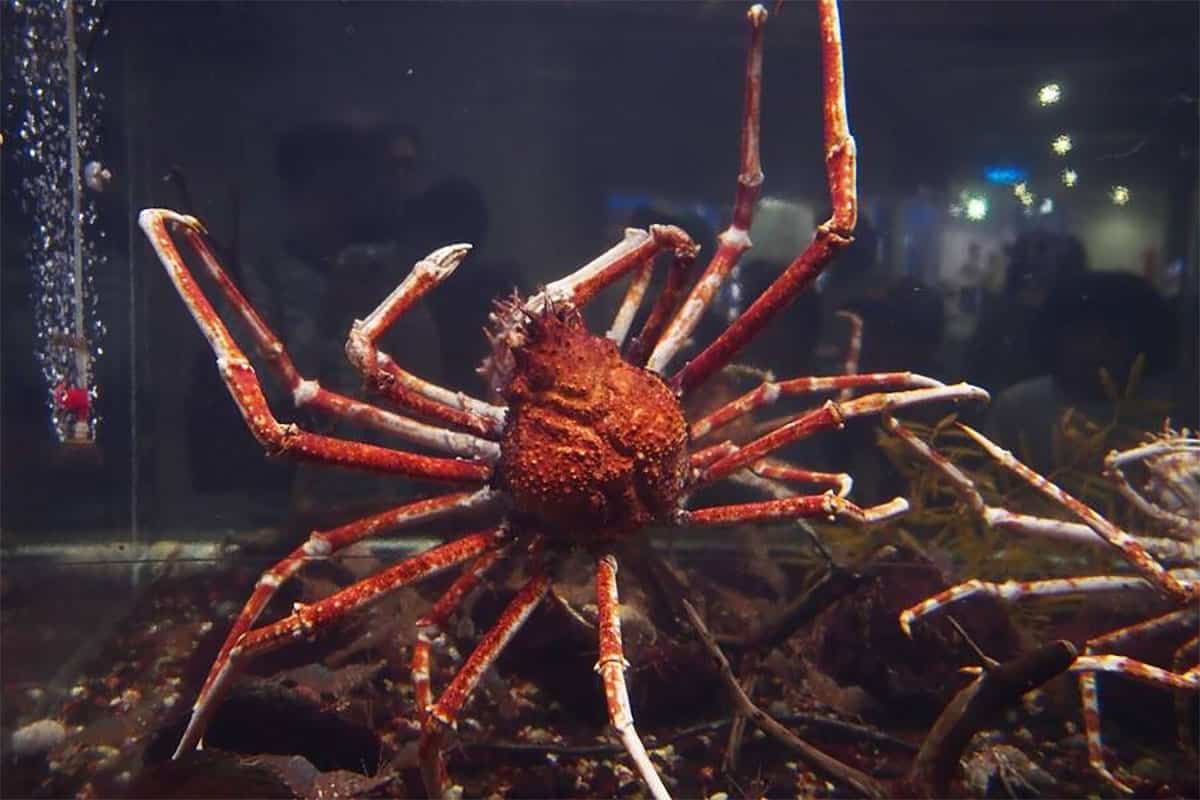 The crabs that dwell in the ocean protect themselves using used shells, kelps, and other things of a similar nature through the process of camouflage. Their bumpy shells also help them to blend themselves in a seabed.

Japanese spider crabs who are held in captivity are kept far from other sea creatures and crabs while they are molting for their own safety. They are put back with them when their shells are hardened.

A Lot Left To Explore

Since these giant crabs dwell deep in the ocean, nothing much has been found out about them. There is a lot left to explore even now.

But, one thing that people have found out with some of the giant spider crabs available to them for studying that these creatures are not much sociable.

The population of these rare species has been declining rapidly. This is why it is extremely important to look out for them!