by Factionary 6 months ago2 months ago
14.9Kviews

Soon after Brittany Murphy landed a role on Drexell’s Class at the age of 14, she seemed to go on an unstoppable path into national spotlight.

A major breakthrough happened to her in 1995 when she was cast in Clueless, along with Alicia Silverstone.

The movie was loosely based on Emma, a novel by Jane Austen.

A modern take on the novel, Clueless was surprisingly a hit that it grossed more than $11 million just in the first weekend at the box office. Brittany Murphy suddenly became a star.

In November 2009, she left the production of a supernatural horror film The Caller and was replaced by Rachelle Lefevre.

There were news that she was actually fired due to spotty attendance and poor attitude overall, although Murphy denied such media reports and cited that the departure was mostly because “creative differences.”

Considering what a talented star she was, it is only fair to say that even today she still deserves your attentions.

Here are some pictures to remember her by. 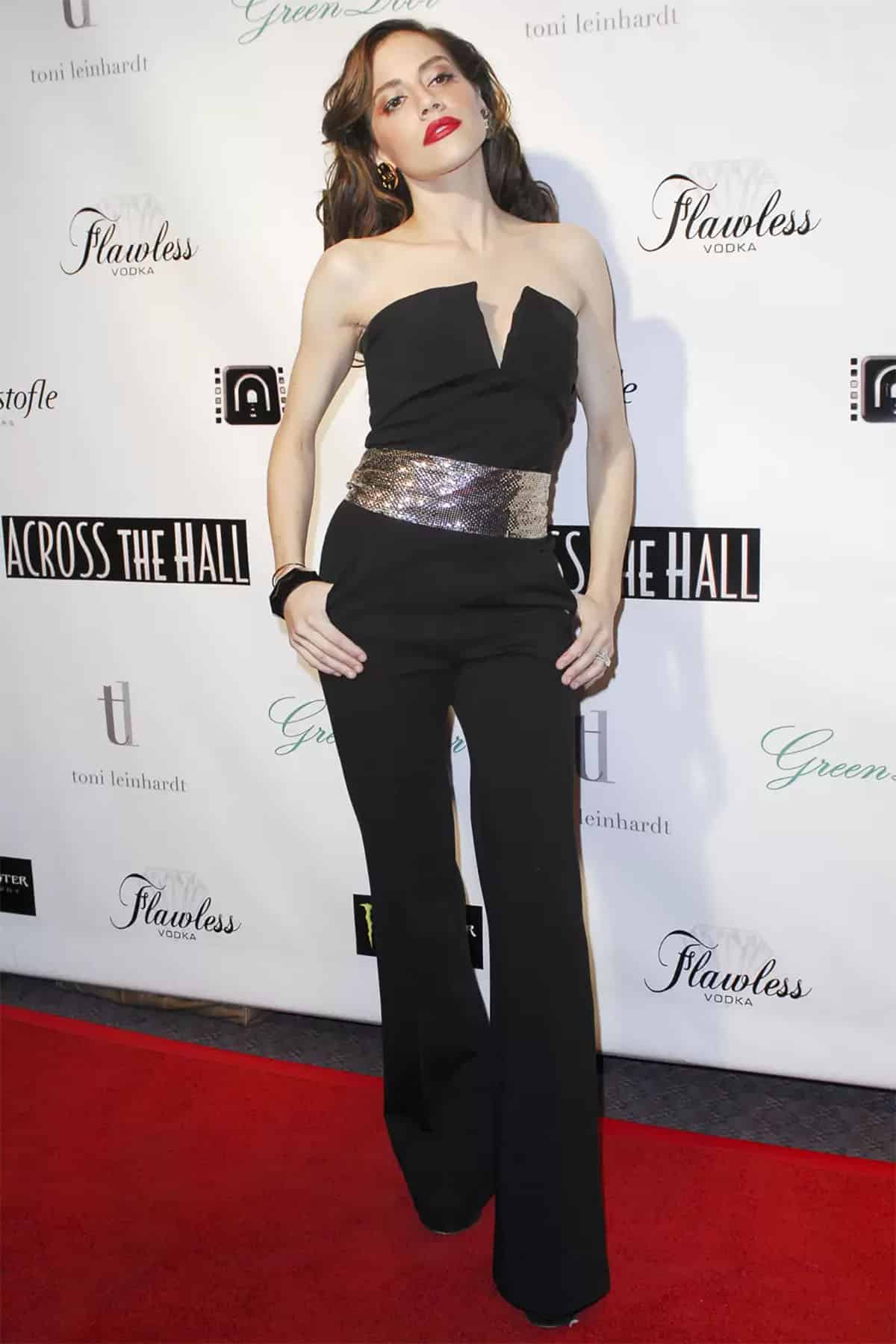 In a supposedly one of the last photos taken of her in public, just weeks before she passed away, Murphy looked thinner than she mostly had been; you could even say she was almost skeleton-like in the photo.

Following the news after her death, this particular photo – along with others from the premiere of an indie film Across the Hall – made the rounds on the Internet.

It might not be the most flattering picture of her, but it was one of the most recent nonetheless.

She made her final public appearance at an LA Pop-Up Shop event few days later. 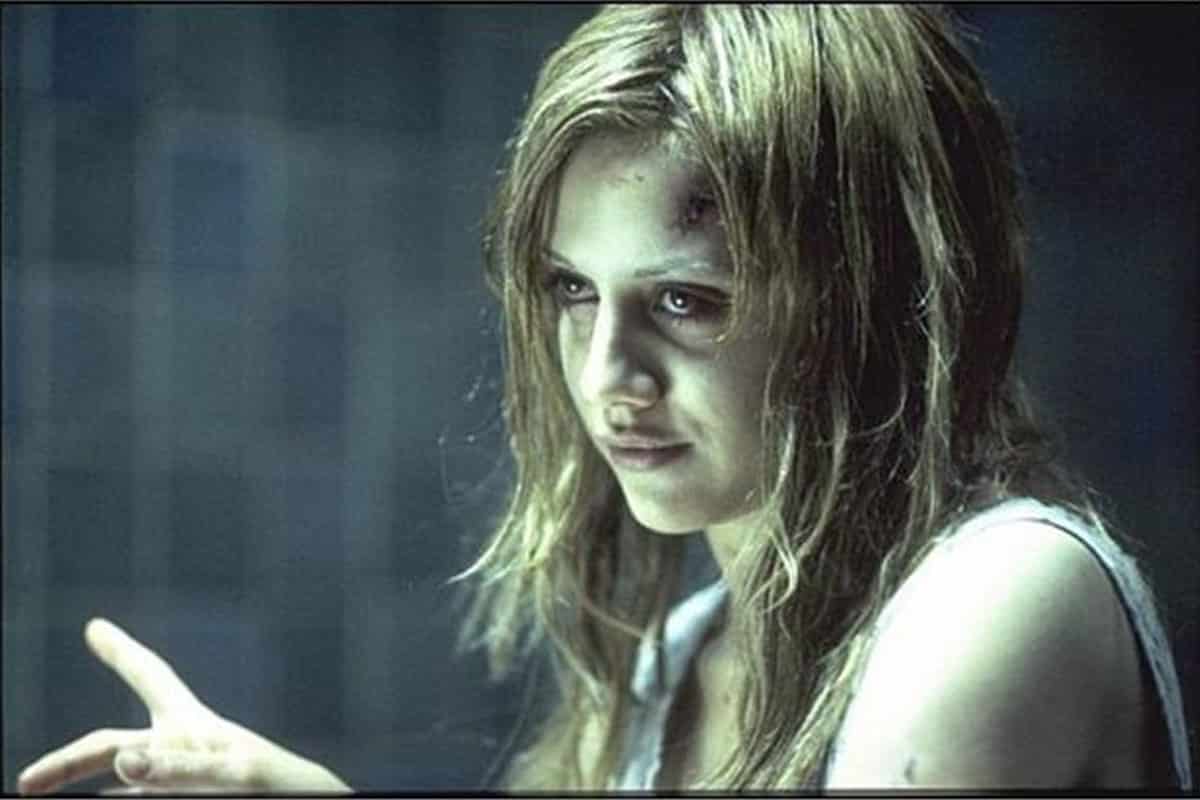 An evidence of how Murphy’s acting brought more depth to a character in a movie than most viewers would realize was her performance as Elizabeth Burrows in Don’t Say a Word.

Here Murphy played the role as a psychiatric patient who kept a valuable secret in her mind.

Some even argue that her portrayal of a mentally disturbed patient was perfect and outstandingly accurate.

Elizabeth Burrows was a major shift from various and more lively characters that Murphy had played earlier in many feature films and TV shows. Despite the challenges, Murphy did a great job. 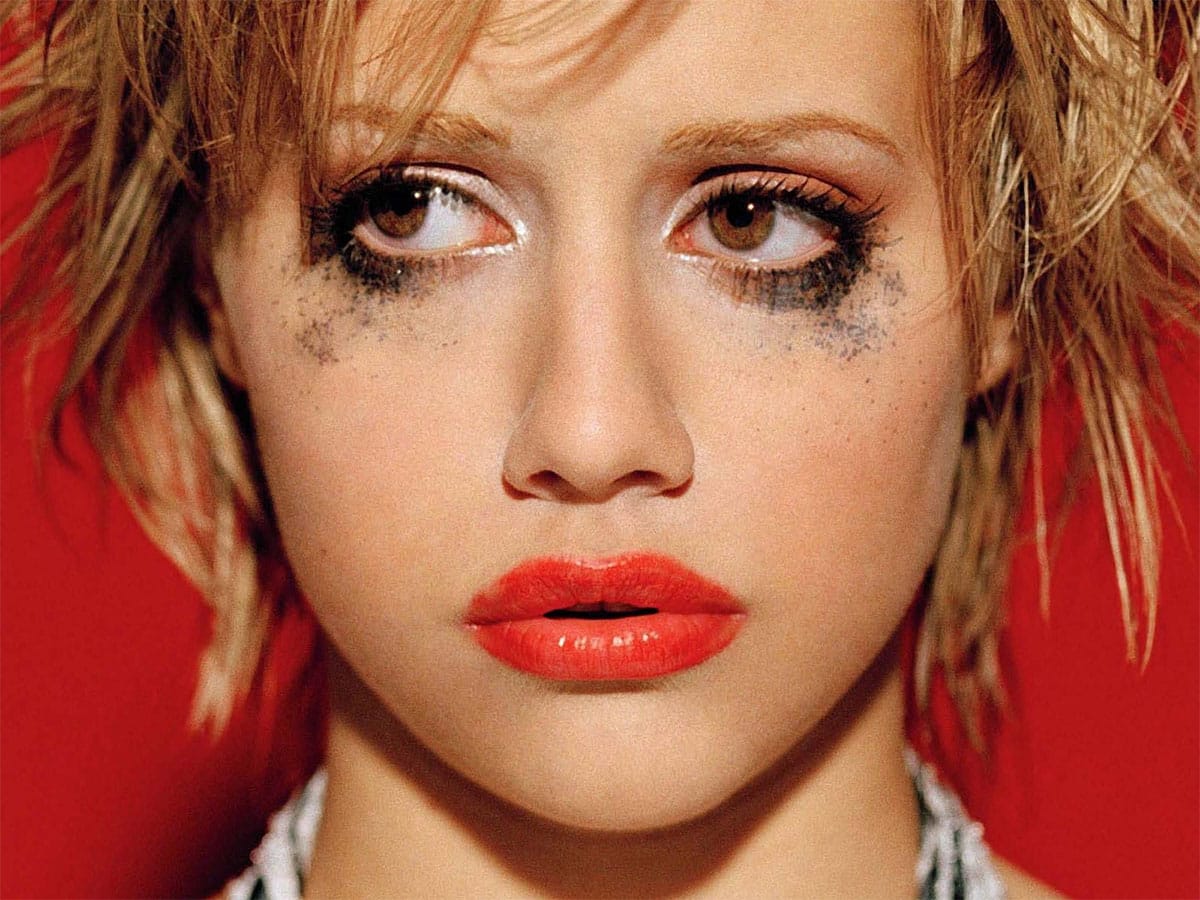 Murphy had done a number of outlandish, wacky, fun photo shoots before the shocking end of her promising Hollywood career.

At that time, one of the big trends among female superstars was bright lipstick accompanied by messy hair and makeup.

With this particular photo, Murphy would put a lot of bigger Hollywood stars to shame.

The seemingly sloppy hairdo and makeup did not make her any less beautiful, but in fact highlighted many of her best facial features including the big eyes and pouty lips.

There is a mystery behind the photo yet the s*x appeal remains prominent. 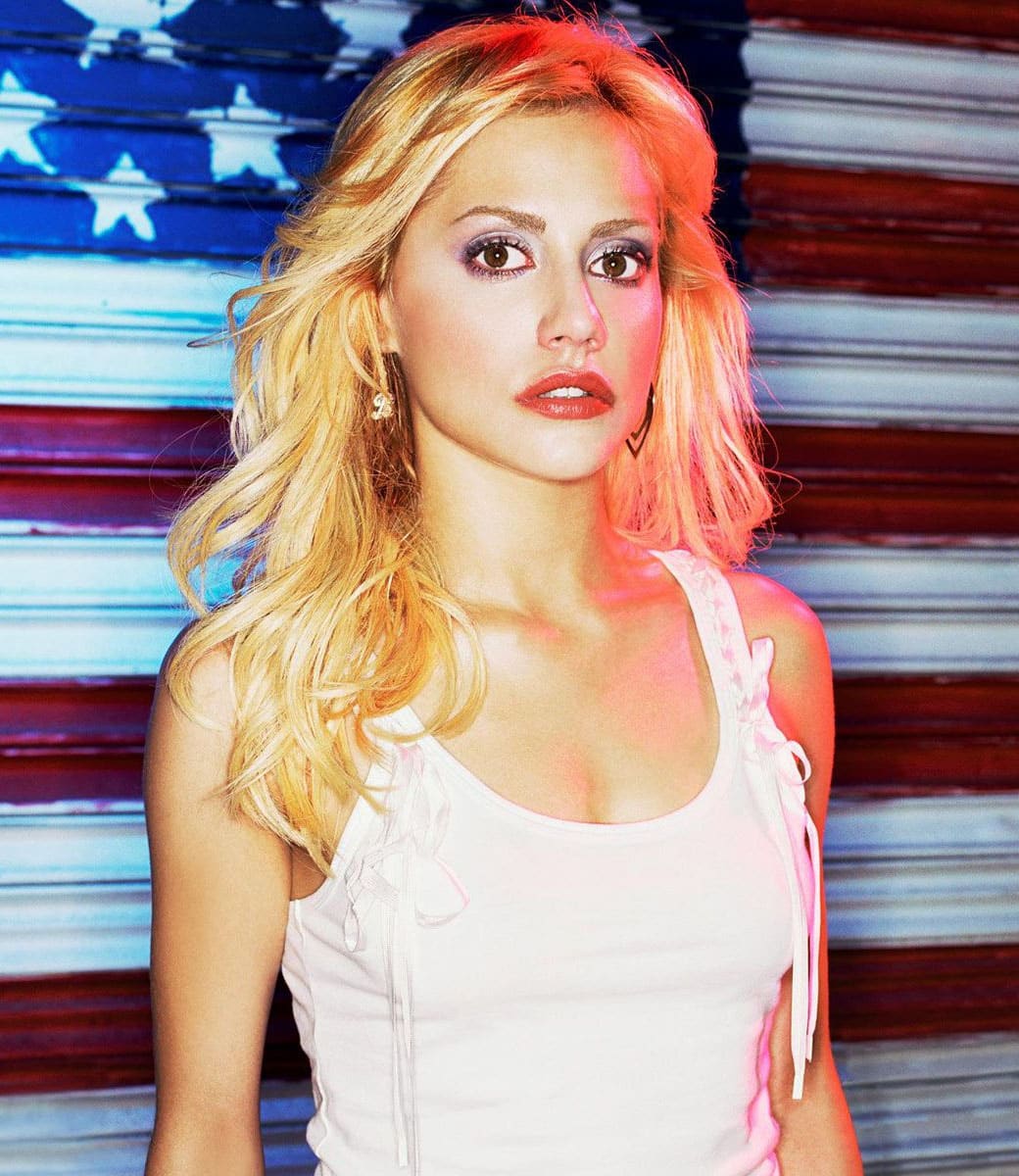 Here is another example of how messy hairdo and light makeup looked remarkably natural on Brittany Murphy.

There is a combination of seduction and smugness on the face; it portrays a strong independent woman and a sense of freedom.

No wonder that even after her death, the photo is still largely posted and shared all across the web.

It is a great reminder that she was a modern women possessing a timeless beauty that anybody of any generation can greatly appreciate.

Throw a star-spangled banner on the background, and you get nothing but a true American girl at her best. 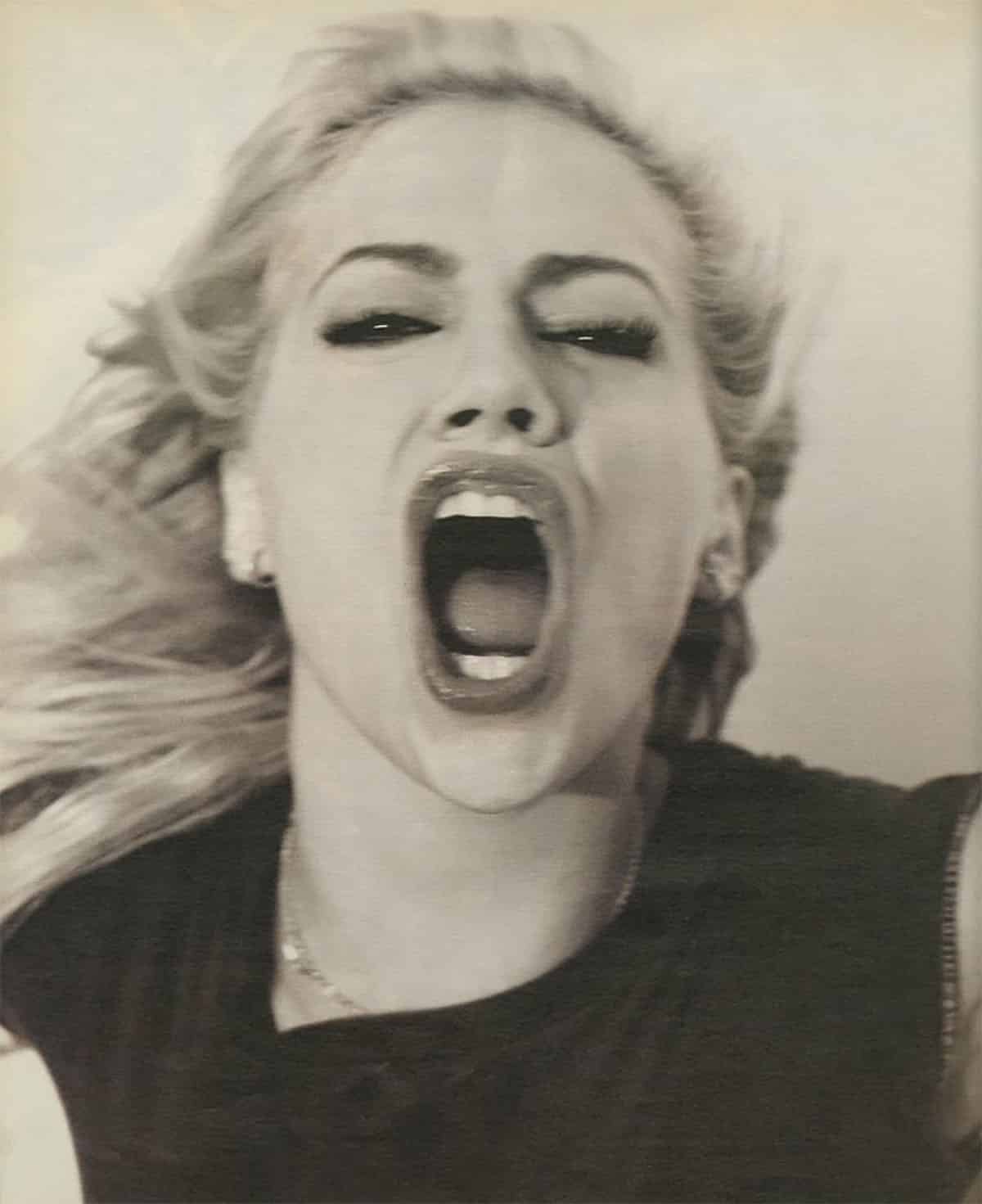 On January 2003, Brittany Murphy was the cover story of the Interview Magazine. For the occasion, she was interviewed by Drew Barrymore.

They talked about life, death, and happiness. At one point, Murphy even talked about working on self-preservation and not losing herself in life.

The magazine had multiple photos from a shoot, including the one shown here. Of course the peace sign was a popular gesture during the early 2000s, but apart from that Murphy looked undeniably natural with the sassy pose and costume.

Crop top and short shorts did not make her look fabulous; she made the clothing look great. 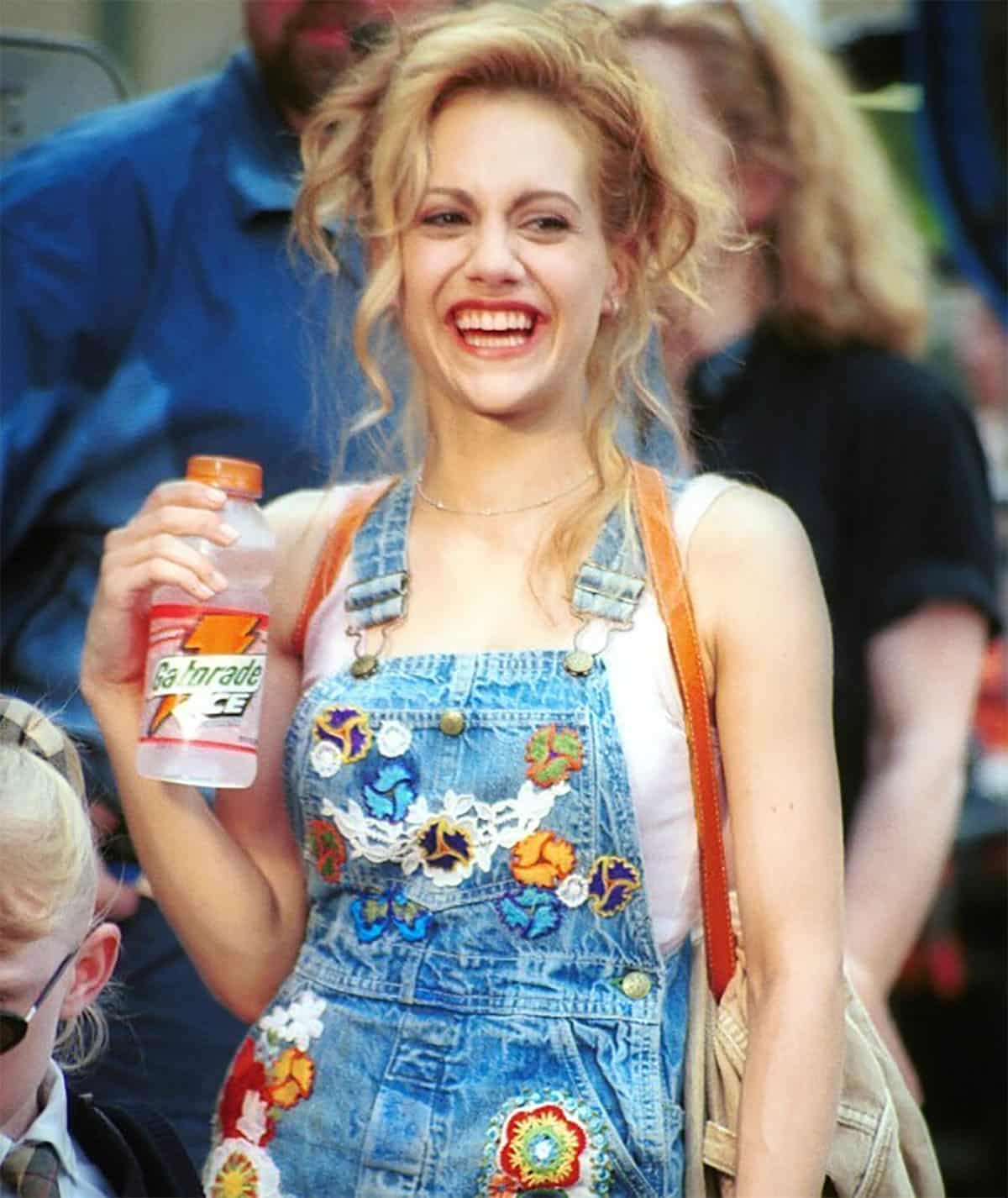 Gunn lives like a rock-star yet she maintains the natural childlike enthusiasm of a young girl.

But then the character has to deal with harsh reality that her father’s fortune was stolen by his own manager.

She has to rely on herself now and make ends meet by babysitting a serious girl named Ray.

Gunn’s uptown costume, happiness, and struggle are about synonymous with Murphy’s stories. 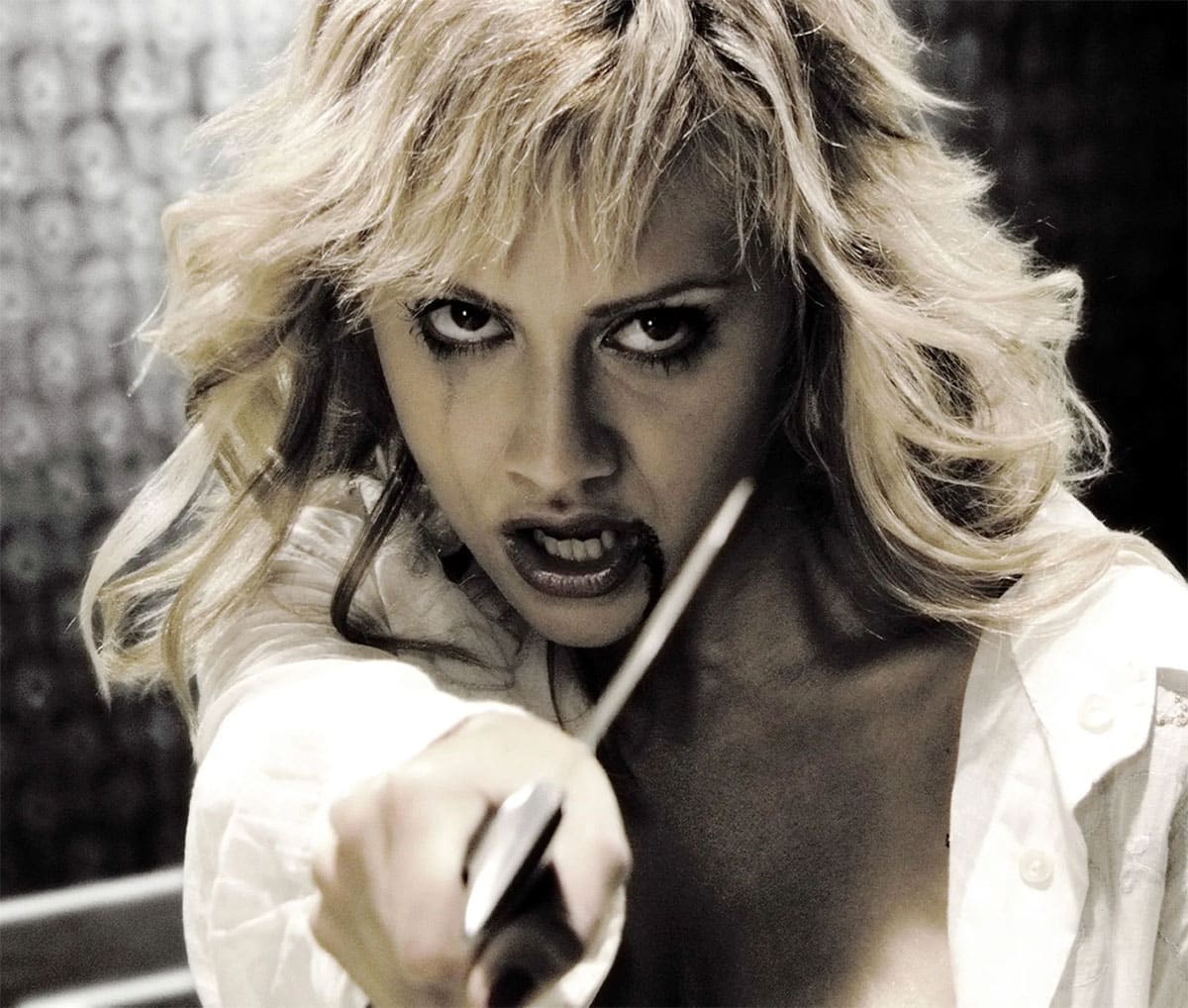 Of course Brittany Murphy was put on some promotional items for the Sin City, as shown in the poster.

It was a crime anthology film based on a graphic novel of the same title.

In Sin City, Murphy had to play Shellie, an innocent s*xy girl who was being harassed by her ex-boyfriend.

As far as the innocent and seductive look, Murphy nailed the difficult combination with flying colors.

The high heels and oversized button up costume make the photo more intriguing than it already is. 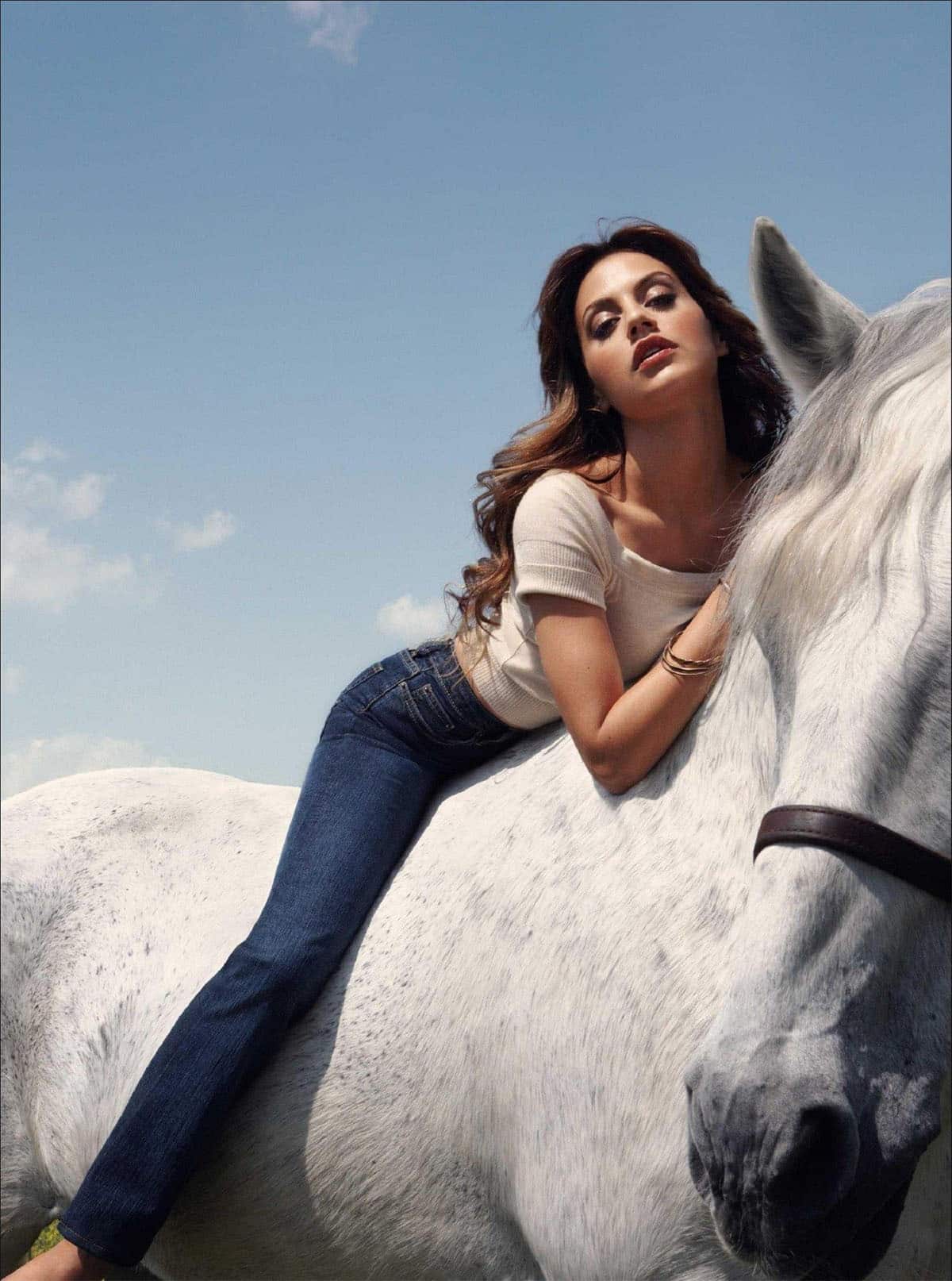 It only makes sense that if you’re a Hollywood star, some photo shoots will require you to do some interesting (to put it mildly) poses for publication purposes.

And if you are a true star, you will find no difficulties making weird things look good.It was the job of a professional, and Brittany Murphy delivered.

This particular photo gained and maintained its popularity for many months, if not years.

That pose on a rocking horse was somewhat unnatural and the wardrobe was everything but practical.

However, Murphy seemed to be enjoying it and looked very comfortable indeed. 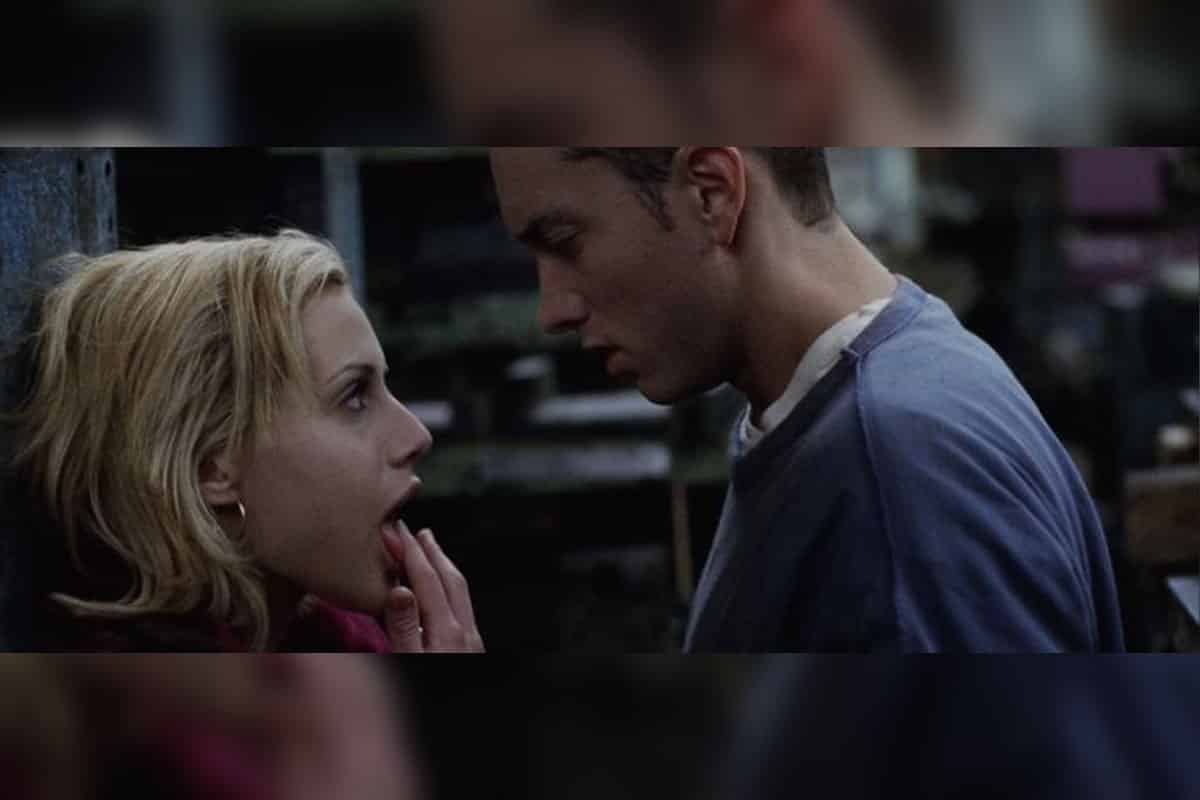 If we compare her characters in two films: Uptown Girl and Sin City, Murphy had to play two completely different characters, yet she made each look easy.

She could be a bad girl too, just like in 8 Mile in which she played a love interest of Eminem.

Some adult actions were done in a secluded part of a warehouse.

In one scene, Murphy had to do a hand lick. She did it without a glitch whatsoever, presumably making everybody cringe and smile. 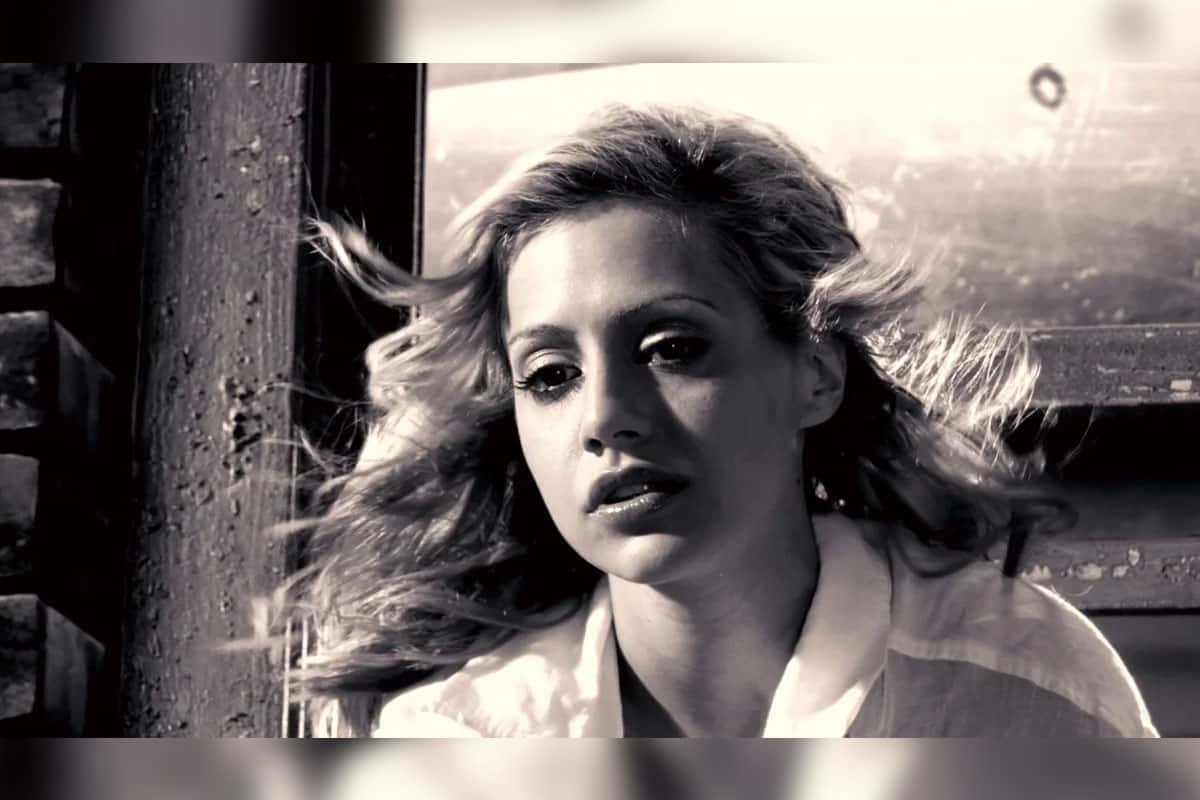 Murphy had photos in which she appeared like a poster happy young child without a care in the world, and then in some photos she was pictured as wild, s*xy, and rebellious.

In Sin City, Murphy’s character (Shellie) is portrayed as a lovable barmaid and occasional girlfriend of Dwight McCarthy, who was an alcoholic, reckless, and violent man.

This photo was from a scene where Shellie looks up at the disappearing McCarthy.

It was taken at a specific angle to let you see a little bit more of Murphy.