by Factionary 9 months ago6 months ago
10.9Kviews

Taylor Phineas Barnum was born on the 5th of July, 1810, in Connecticut and has always had a knack for entrepreneurship since his early age. He initially sold snacks and homemade cherry rum at local gatherings, and by age 21, he owned a general store, a small lottery, and his newspaper called “Herald of Freedom.”

Barnum acquired John Scudder’s American Museum in New York City in 1842, a five-story marble structure filled with stuffed animals, waxwork figures, and similar conventional exhibits. Barnum renamed it after himself and filled it with items that arouse curiosity that people are willing to pay for, scouring the world for such items, living or dead.

Barnum left the museum in 1868 when a fire had destroyed the museum twice and retired from the museum business.

In 1871, Dan Castello & William Cameron Coup persuaded Barnum to lend his name, financial backing and business expertise to the circus they already created. Barnum obliged and the show was given the title, “P.T. Barnum’s Great Traveling Museum, Menagerie, Caravan, and Hippodrome”.

Earlier in 1860, James Bailey had teamed up with James E. Cooper to create Bailey and Cooper Circus and the circus outperformed Barnum’s circus.

In 1881, Barnum proposed a partnership with James Bailey, and they both created their circus and named it “Barnum & Bailey Circus” making a fortune running “The Greatest Show on Earth.”

The circus ran until 1905 after Bailey’s death (Barnum had died earlier in 1891, and Bailey bought Barnum’s share of the circus from his widow), and was sold to the Ringling Brothers in the same year. 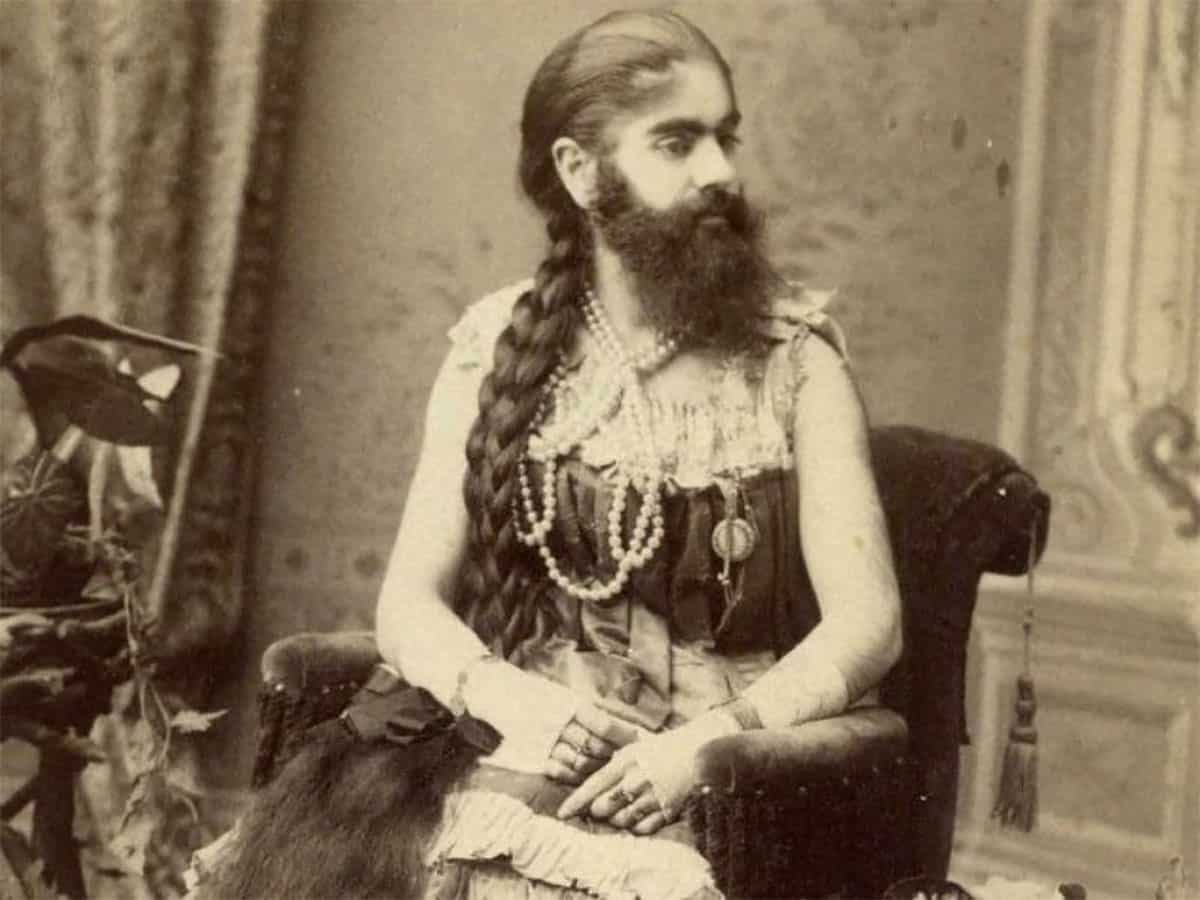 Annie Jones was born in 1865 with a chin covered in hair in Virginia. She joined Barnum’s exhibition at the early age of nine months and was known as “Infant Esau.”

Although over the next couple of years, she would later change her name as she grew up to “Esau Child” and then to “Esau lady.” At age five, she had already grown full beards, a mustache, and sideburns, and during adulthood, she sported a full length beard and also grew the hair on her head to over six feet in length.

Annie Jones suffered from a condition known as Hirsutism or an unrelated rare genetic condition that affects children of both sexes.

She expanded her talents, and apart from her massive beards being the center of attention, she also became an accomplished musician and exhibited basic etiquette at shows.

Her facial hair didn’t stop her from having a healthy life as she got married to Richard Elliot and this marriage would ogo on for 15 years until he divorced her. She later married another man (William), but the union didn’t last for long as he died shortly after their marriage.

Jones initially left Barnum’s show after her second marriage but went back after her husband died. 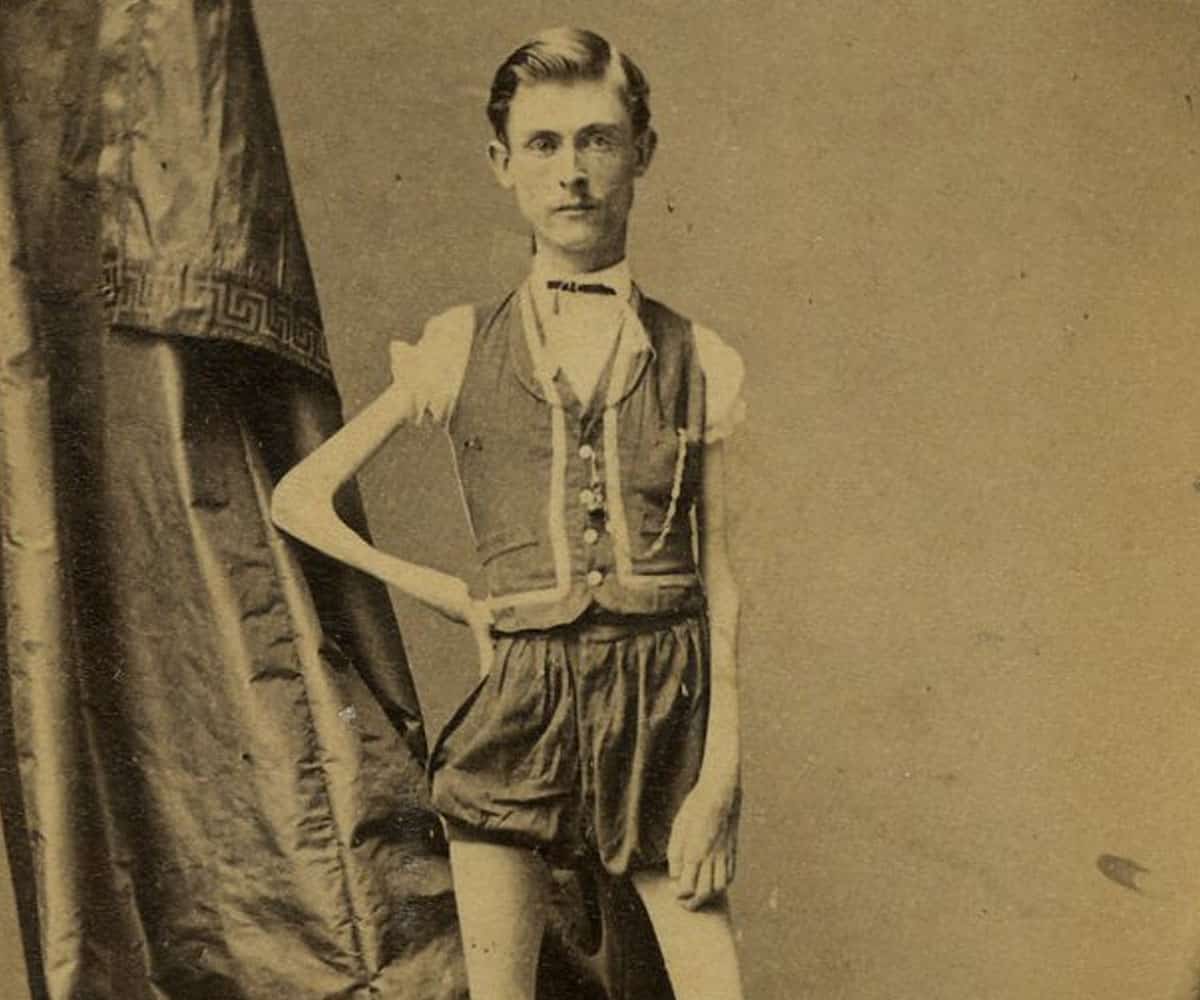 Isaac W. Sprague was born in 1841 in East Bridgewater, Massachusetts. He was healthy for much of his early childhood but began to lose weight rapidly and irreversibly at the age of 12, despite having a healthy appetite.

His parents took him to hospitals, and he was diagnosed with extreme progressive muscular atrophy. He initially worked different jobs while growing up, but after he started suffering from his condition, he couldn’t keep up the physical demands of the job.

In 1865, he got a job at the circus sideshow and became known as “the living skeleton.” One year later, he got the attention of Barnum, and he hired him to work at his American museum paying him $80 per week for his services.

When the museum burned down in 1886, Isaac used his time off to start a family and fathered three healthy kids.

At age 44, Isaac was 5 feet 6 inches tall and weighed 43 pounds. His condition required him to keep taking in nutrients, and he always keeps a flask of sweetened milk around his neck to keep him conscious and alive. 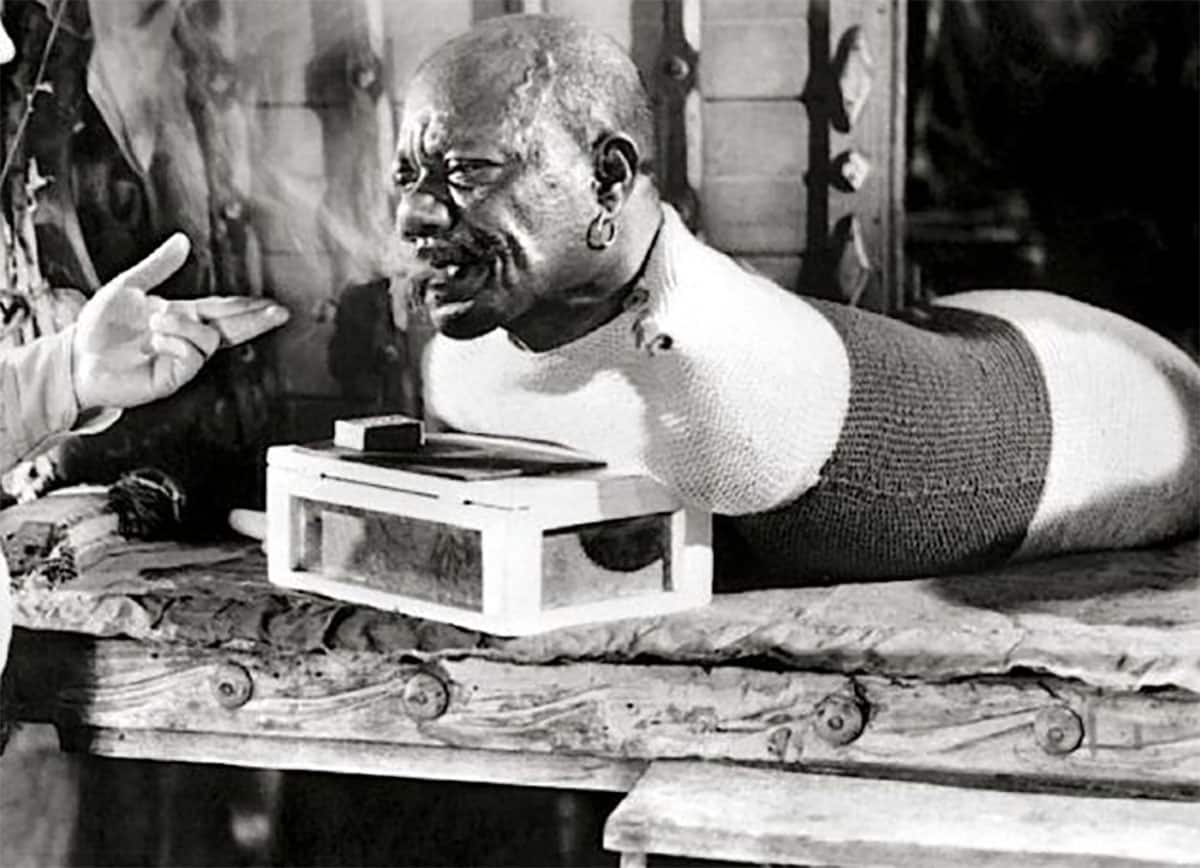 Prince Randian was born in 1871 in Demerara, British Guyana, without limbs. Randian was widely known as The Snake Man, The Human Torso, and The Human Caterpillar, because of the absence of his limbs.

Randian suffered from tetra-amelia syndrome and was born without any limbs; his hands stopped growing at his shoulders.

P.T Barnum brought him to the United States in 1889 at the age of 18 and he performed in circus sideshows for 45 years.

He wore a one-piece wool garment that fits over his body and moved around the stage by wiggling his hips and shoulders. Randian was famous for his ability to roll and light a cigarette with just his lips. He could also paint and write by holding either a brush or pen with his lips.

Randian’s birth name remains unknown, but he spoke Hindi, German, French, and English. He died in 1934 at the age of 63 years. 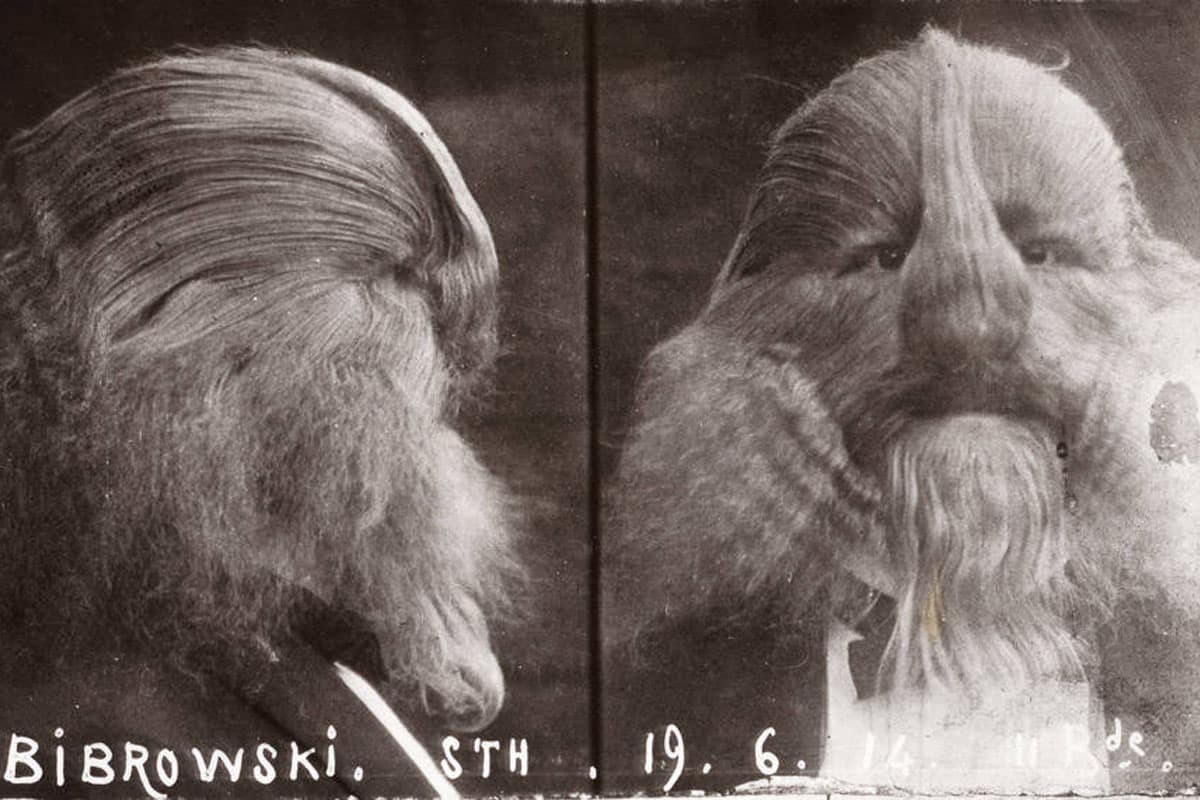 Stephen Bibrowski, widely known as Lionel the Lion Man, was born in 1890 in Bielsk in Congress Poland. Stephen suffered from a rare condition known as hypertrichosis, a condition in which the whole body is covered in long hairs.

Stephen’s mother, Benedict, blamed his condition on the mauling of his father by a lion, which she witnessed when she was pregnant and thus labeled Stephen an abomination.

She gave him up at age four to a German impresario named Sedlmayer, who gave him his stage name (Lionel the Lion Man), and started exhibiting him around Europe.

At this time, Stephens’s hair had grown to about eight inches on his face and four inches all over the rest of his body, giving him the facial appearance of a lion. His entire body was covered with hairs, except for his palms and soles of his feet.

In 1901, Lionel travelled to the United States and appeared in Barnum & Bailey’s circus. From there, he started touring with the circus performing gymnastic tricks and showcasing his unique features.

In late 1920, Lionel, the Lion Man, retired from his sideshow career and died of a heart attack in Berlin. 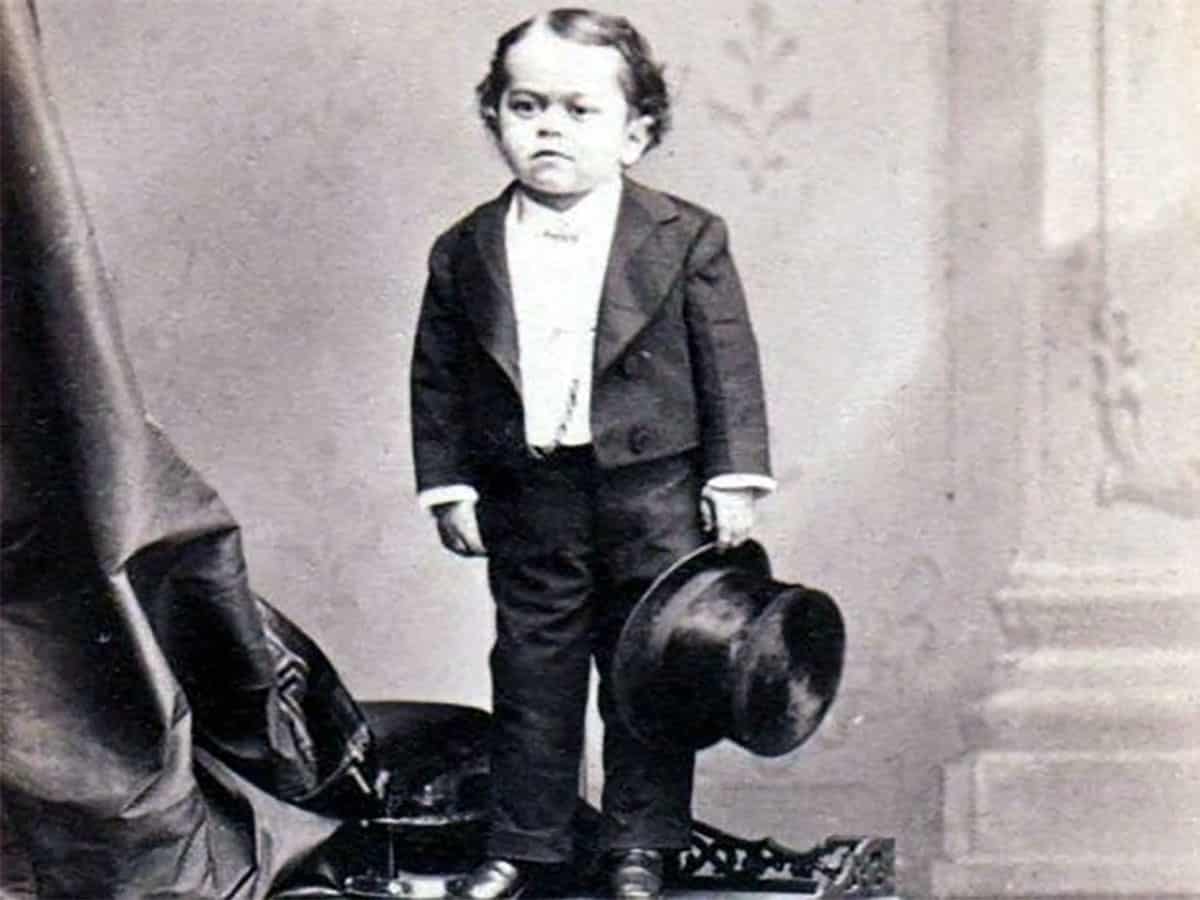 Leopard Kahn was born in San Francisco in either 1859 or 1863. He was one of the three survivors in a family of 10 children; his other two brothers were also dwarfs.

His mother was declared insane when she tried to drown Kahn at age two.

Barnum discovered him in 1869 and gave him the name Admiral Dot, otherwise known as the El Dorado Elf, because he was such “a valuable nugget,” dressing him in complete Admiral Uniform. He also performed with the American Lilliputian company in 1877, and also toured with Adam Forepaugh’s circus in the 1890s.

When Admiral Dot was 16, he had grown twenty-five inches tall and weighed a mere nineteen pounds. He initially performed with his mother beside him on stage.

Admiral Dot later got married to his twenty-six-inch-tall wife, Lottie Swartwood (a fellow performer in the opera company), and their two normal-sized children until his death in 1918. 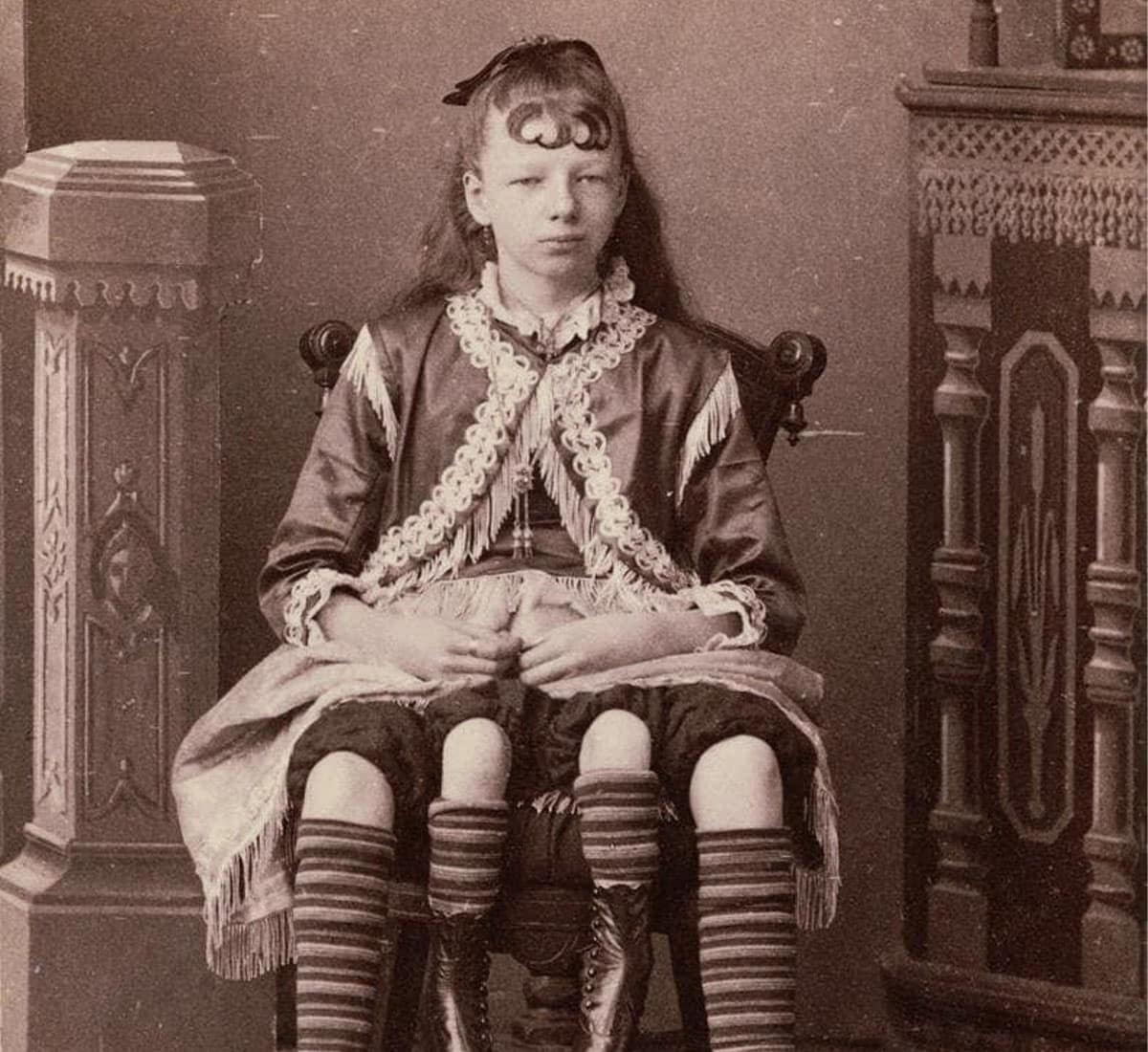 Born Josephine Myrtle Corbin in 1868 in Lincoln County, Tennessee, Myrtle suffered from a condition called Dipygus, a severe congenital deformity where the body axis forks left and right pathways along the torso with the legs and pelvis duplicated.

In simple terms, she had two separate pelvises side by side from her waist down.

She entered the circus sideshow at the age of 13 as the Four-Legged Girl from Texas.  Six years later, she got married to Jamie Clinton Bicknell at the age of 19, and the couple had five kids.

P.T Barnum heard about her and hired her to perform at his sideshow for about four years.

Reports from her early childhood indicated that she was a perfectly healthy and normal child throughout infancy and childhood, despite her four legs. Audiences that attended her shows say she had a calm demeanor and a gentle disposition.

Myrtle died in Cleburne, Texas, in 1928 of erysipelas. 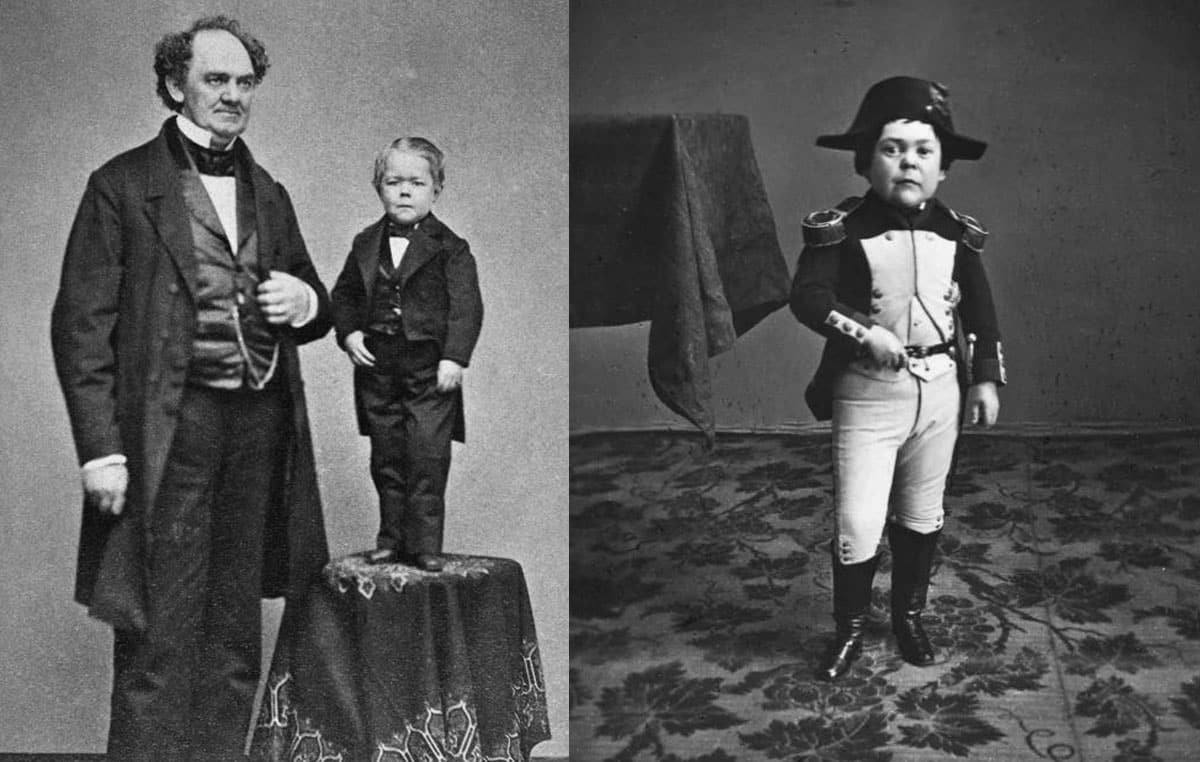 Born as Charles Sherwood Stratton in 1838 in Bridgeport, Connecticut, and widely known by his stage name General Tom Thumb.

In his early childhood, Stratton normally developed for the first six months of his life, weighing 6.5kg, reaching a height of 25 inches, but he stopped growing at the age of 6 months.

Barnum, a distant relative, taught Stratton how to sing, dance, and impersonate famous people, and later Barnum went into business with Stratton’s father, who died in 1855.

Stratton went on his first tour of America with Barnum at the age of five, entertaining audiences and impersonating great characters like Cupid, Napoleon, etc.

When Stratton was six, Barnum took him on a full tour of Europe appearing before dignitaries like Queen Victoria and also meeting the Prince of Wales.

He later married Lavinia Williams in 1863, and Stratton died of a stroke in 1883. 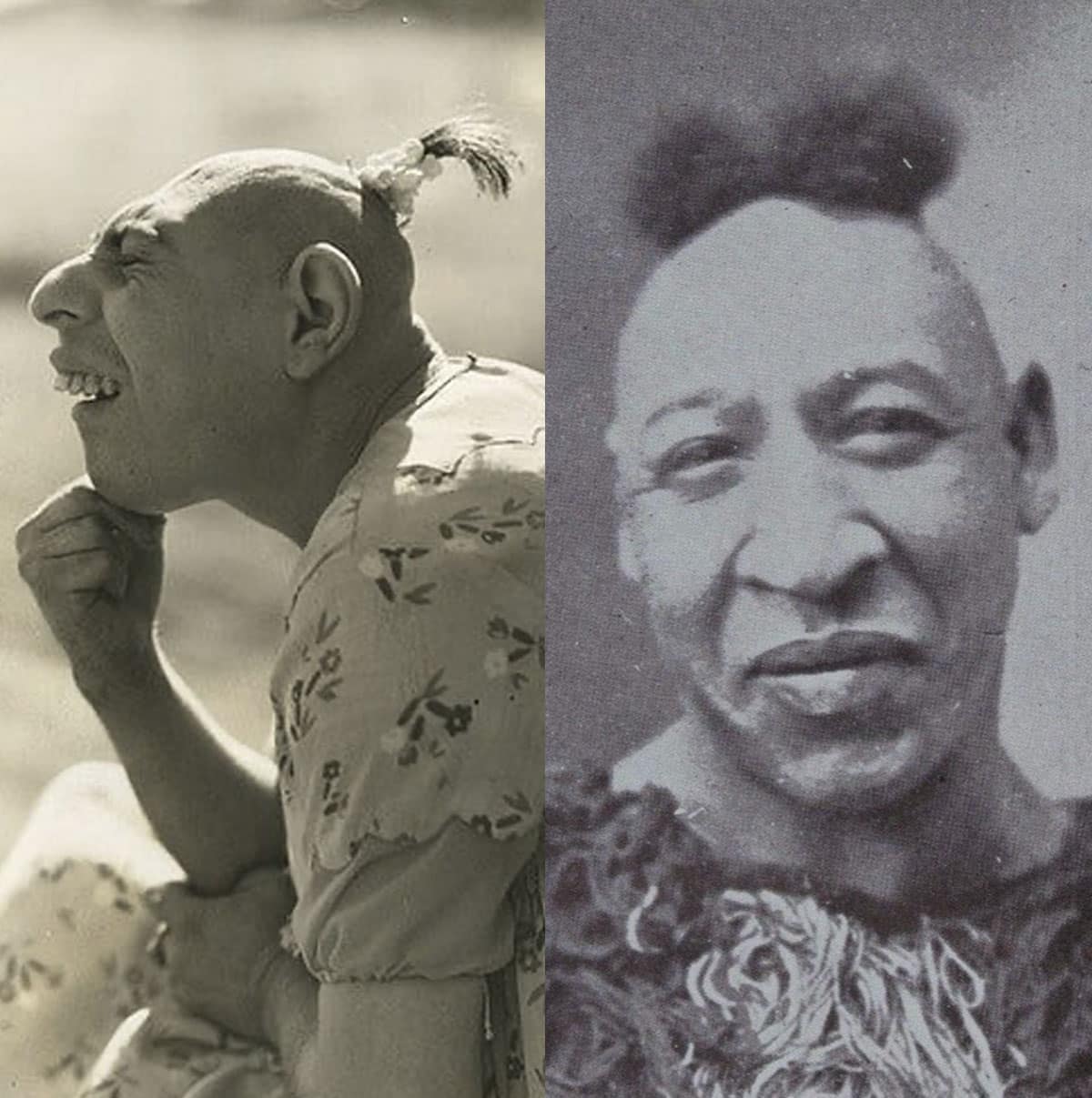 Zip the Pinhead was born William Henry Johnson in New Jersey in 1842 to an impoverished family, his body size developed normally, but his head remained small.

His parents allowed him to be used in the circus in return for money, and he was labeled the missing link between man and ape.

Johnson was revealed in a cage where he would rattle bars, screech, and be portrayed as a wild man. The story told about him at the shows was that he only ate raw meat, nuts, and fruits and that he was only just learning to eat bread and cake.

Barnum hired him in 1860 and shaved his head, leaving only a small portion at the top of his head and gave him a bizarre fur to cover his body.

His association with Barnum soon made him famous, and he drew the attention of prominent figures, the Prince of Wales; Albert Edward visited him in 1860.

Zip didn’t play musical instruments, but the audience loved seeing him play and dance with his fiddle.

Johnson didn’t suffer from mental retardation, common to most microcephaly patients, but his mental capacity was not accurately determined.

He died in 1926 after entertaining over 100 million people and 67 years of sideshow business. 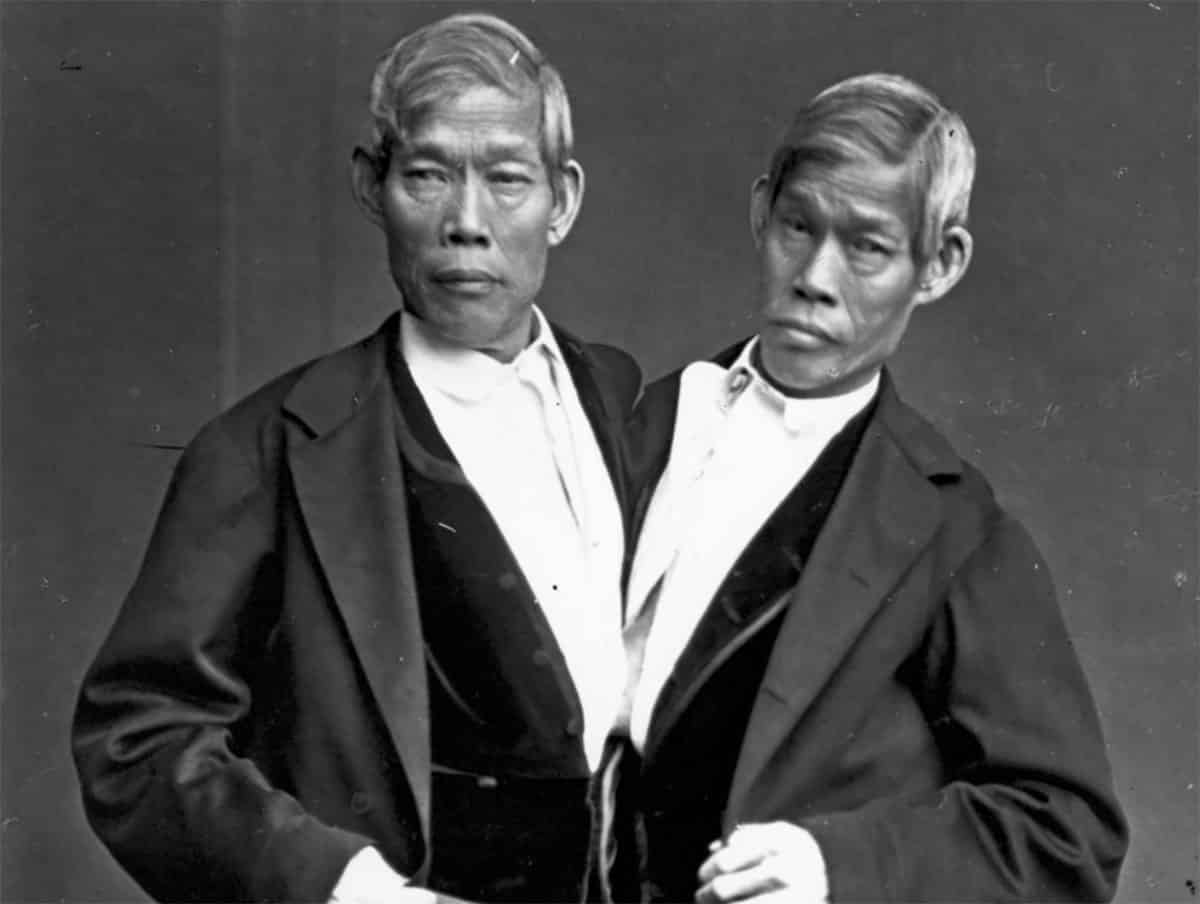 Chang and Eng, famously known as the Siamese twins, were born in 1811 in Thailand and arrived on U.S. soil in 1829. The conjoined twins were attached by a small four-inch bridge of flesh that ran between their stomachs.

Scottish businessman Robert Hunter saw the twins during a tour of Siam and paid $500 to their mother to sell her sons to him.

Hunter brought them into the United States and profited off the twins without paying them a dime.

The twins left Hunter when they turned 21 and ran their show for eight years using their proceeds from the tour to buy a plantation in 1839 and settle to live a healthy life. They married local sisters and fathered 21 children before their death in 1874. 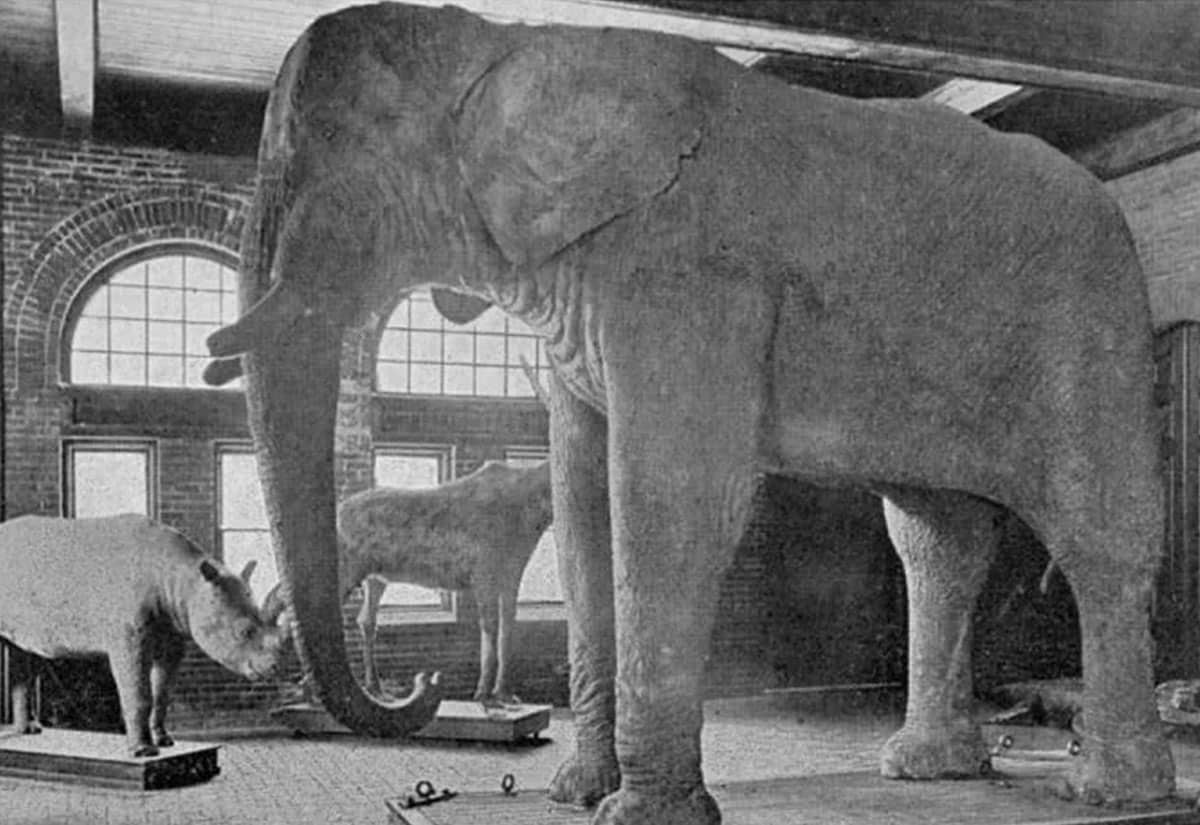 Also known as Jumbo, the Circus Elephant was an African bush elephant born in Sudan in 1860. Jumbo was sold to P. T. Barnum in 1882, drawing public outcry from London as Jumbo was a favorite with the kids, always taking them for a ride on his back and was brought to the United States the same year for the exhibition.

At that time, Jumbo stood at 12 feet and weighed 7 tons and was the most significant elephant anyone had ever seen. In New York, Barnum exhibited Jumbo at the Maddison Square Garden, and within the first three weeks, Barnum had recouped the amount he spent on Jumbo.

Jumbo was the star of Barnum’s greatest show on Earth, where he brought in some of the biggest crowds in the history of the animal circus. In 1884, Jumbo led a team of 21 elephants to cross the Brooklyn Bridge to prove its safety.

Jumbo died in 1885 in a train accident, and his bones were preserved, his intact skeleton lives at the American Museum of Natural History in New York City.