by Factionary 5 months ago2 months ago
19.9Kviews

Nobody wants to live with any kind of physical deformity, but some people unfortunately had no option because they were born with the condition to begin with.

Medical science doesn’t always have the answer; certain deformities develop due to underlying diseases, others are triggered by genetic mutations, but there are more with unknown causes.

Surgeries are in most cases the best chances for patients to improve quality of life or perhaps heal completely, although there is no guarantee whether such invasive medical procedure will not lead to complications.

People listed here have – or had – to endure many years (if not the entirety) of life being physically different from the rest of the society.

Few of them were turned into outcasts because even their own immediate families selfishly turned to abandonment instead of providing proper love and care.

Bear in mind that in the following stories, you will come across some uncomfortable images of physical deformities you’ve probably never seen before. 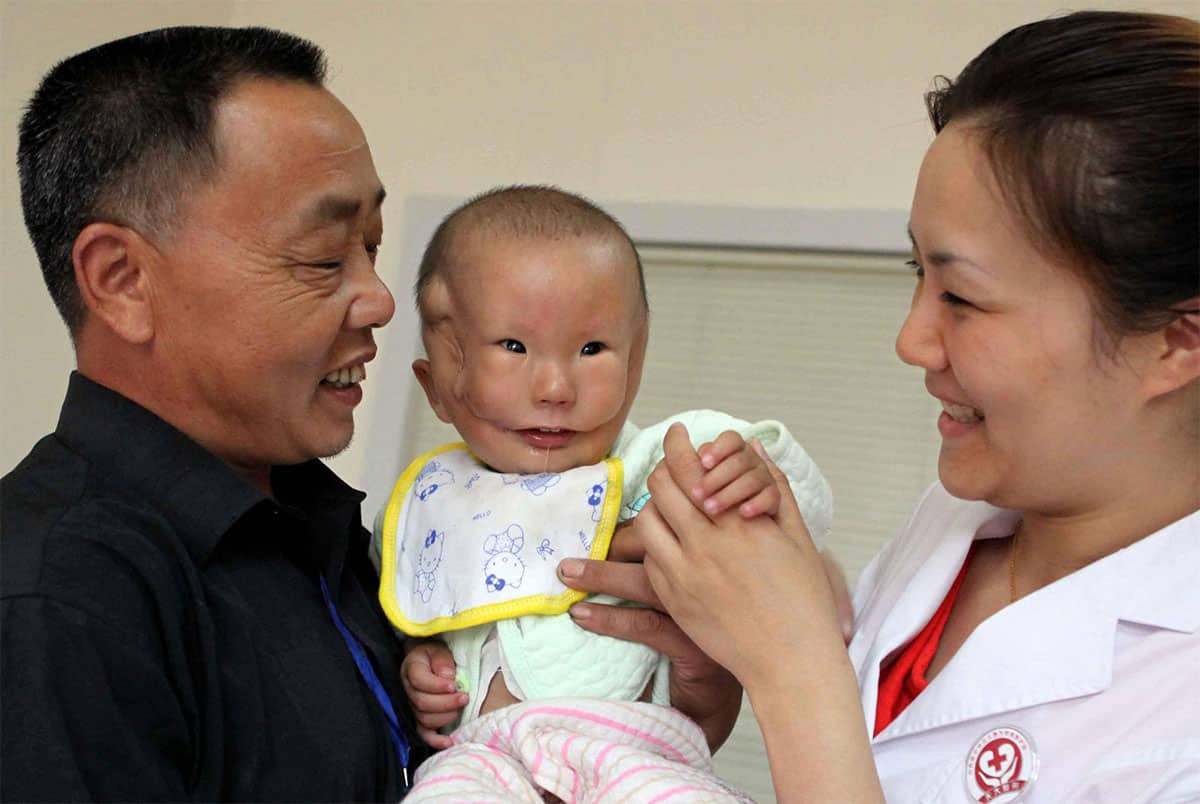 When a 14 month old baby named Huikang was administered to the Military Hospital in Changsha in 2010, he made headlines throughout the world.

He suffered from a transverse facial cleft, a very rare condition that gave the boy a second face on top of his normal face, giving him the appearance as if he was wearing a mask.

Although it took the family a significant amount of money for Huikang’s treatments, the boy eventually underwent multiple surgeries to correct his face. 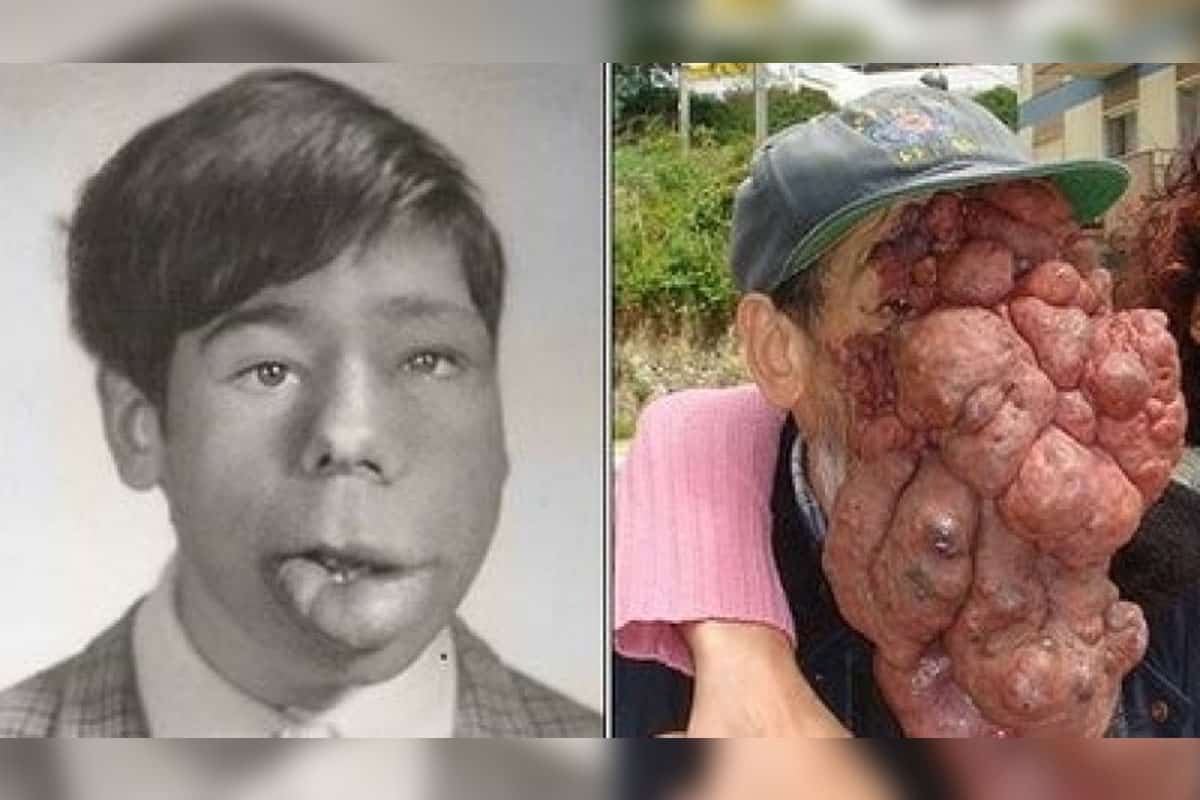 On 6 December 2007, the Discovery Channel aired a documentary film titled “The Man with No Face” as part of My Shocking Story series.

It was about the story of Jose Mestre from Lisbon, Portugal. This man developed a significantly large facial deformity, which started as a lip growth when he was 14 years old.

The lip growth turned into a tumor so large, which at one point weighed over 12 pounds, rendering him blind in one eye and almost completely unable to eat and breathe.

He travelled to Chicago in 2010 to have the tumor removed afte living with the disease for more than 40 years. 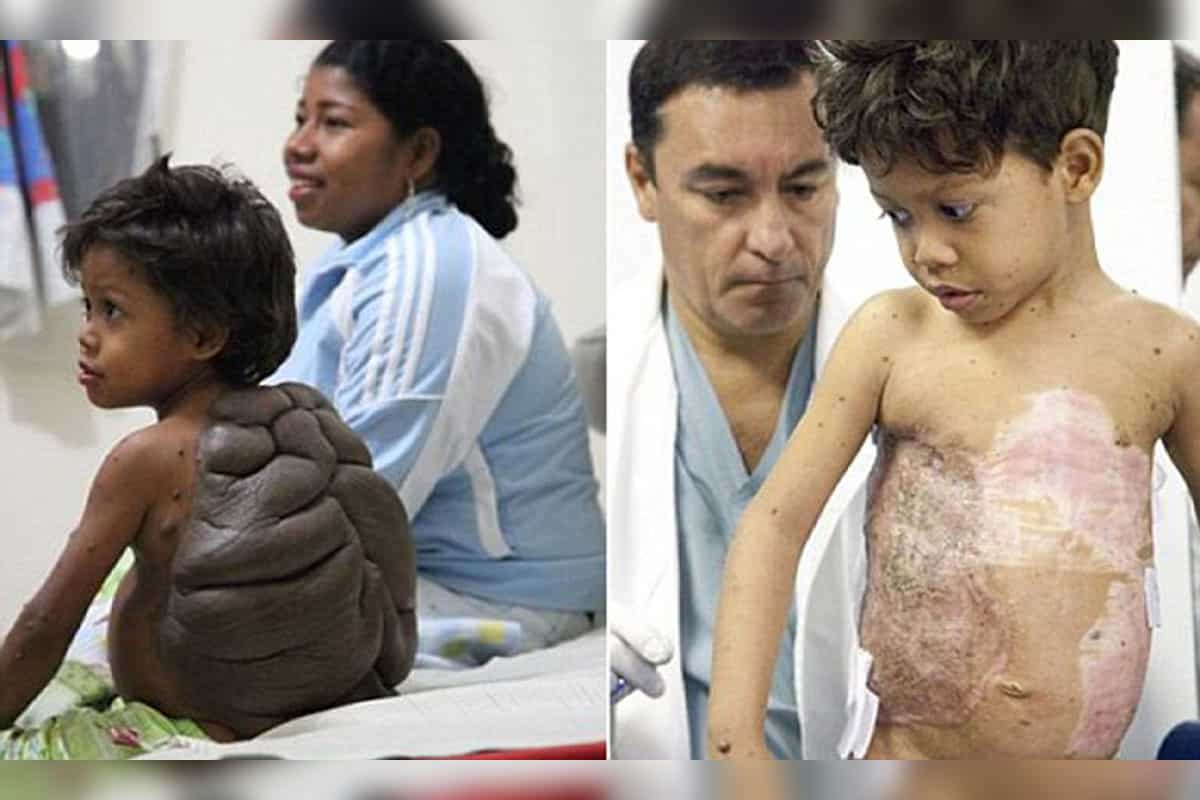 Didier Montalvo from Colombia had to endure a true ostracism from the school and community in his toddler age due to his physical deformity.

The little boy was born with a condition called congenital melanocytic nevus, which caused moles to grow all over his body.

One section of the mole grew so fast that it covered almost his entire back, hence the unfortunate moniker.

Neil Bulstrode, a leading plastic surgeon, manage to have Montalvo travelled to Bogota where Bulstrode and his team of specialists performed a series of successful surgeries to remove the mole. 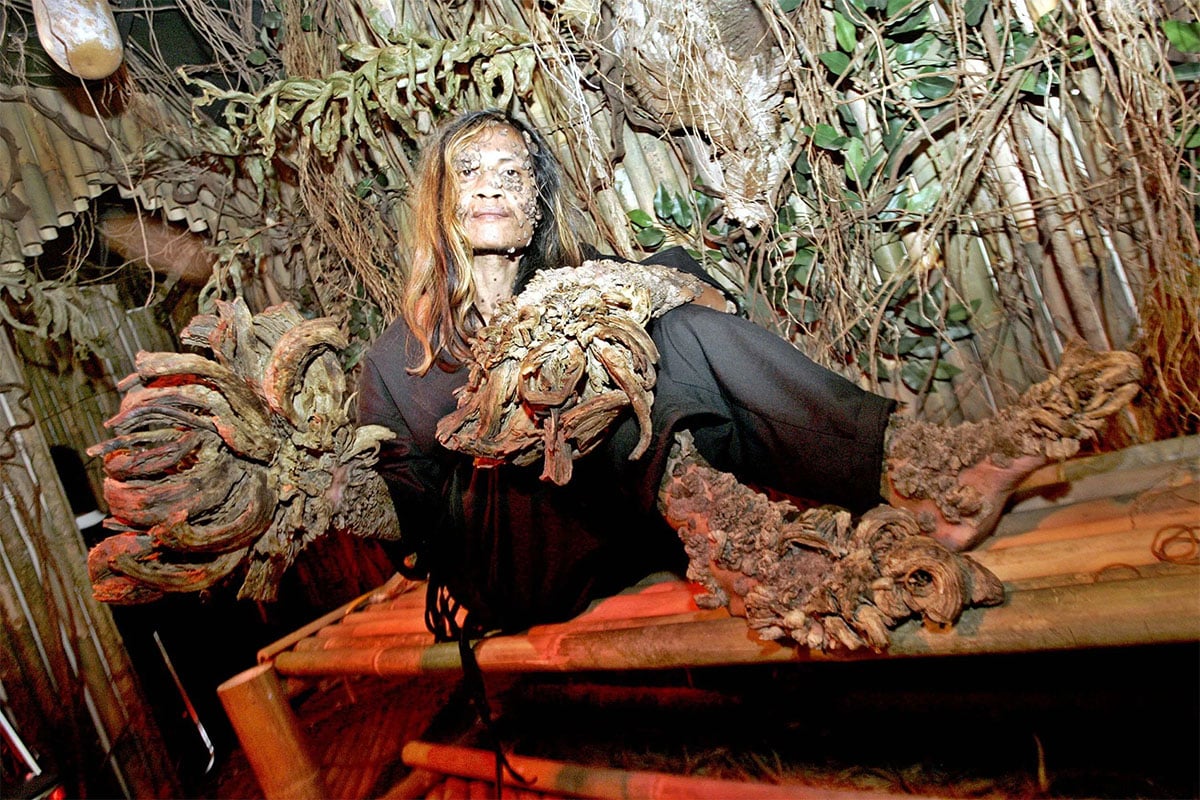 Dede Koswara, also known as “The Tree Man,” was a carpenter from Indonesia who suffered from a medical condition known as epidermodysplasia verruciformis (EV), a rare skin disorder that causes human papillomavirus (HPV) to grow out of control, leading to the growth and development of warts that resemble tree bark.

In August 2008, he underwent multiple surgeries that successfully removed about 13 pounds (about 95%) of the warts from his body.

His condition notably improved that he regained use of his hands and feet.

Unfortunately the surgeries and treatments did not stop the warts from growing back. He died in January 2016 from a series of health problems related to the skin disorder. 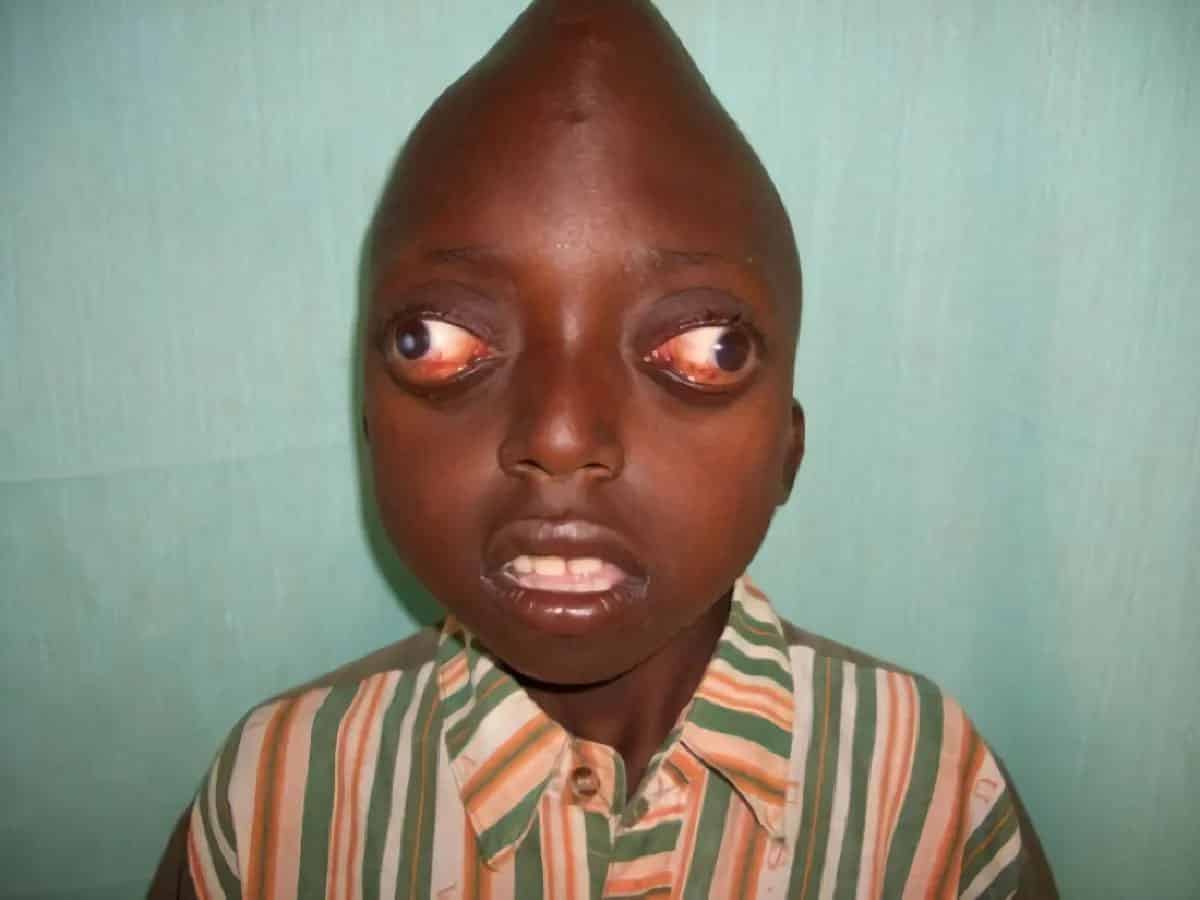 A boy from Uganda had to deal with intense social hardship in his early years when he suffered from a condition called Crouzon syndrome, a genetic disorder that caused a malformation in the skull; his ears were pushed down and his eyeballs were also pushed out of their sockets.

A doctor who heard about Byakatonda’s story raised money for the boy to travel to Austin, Texas where he would stay for several months while receiving treatments including corrective surgeries.

Byakatonda was healed, and now he lives a normal life in his village. 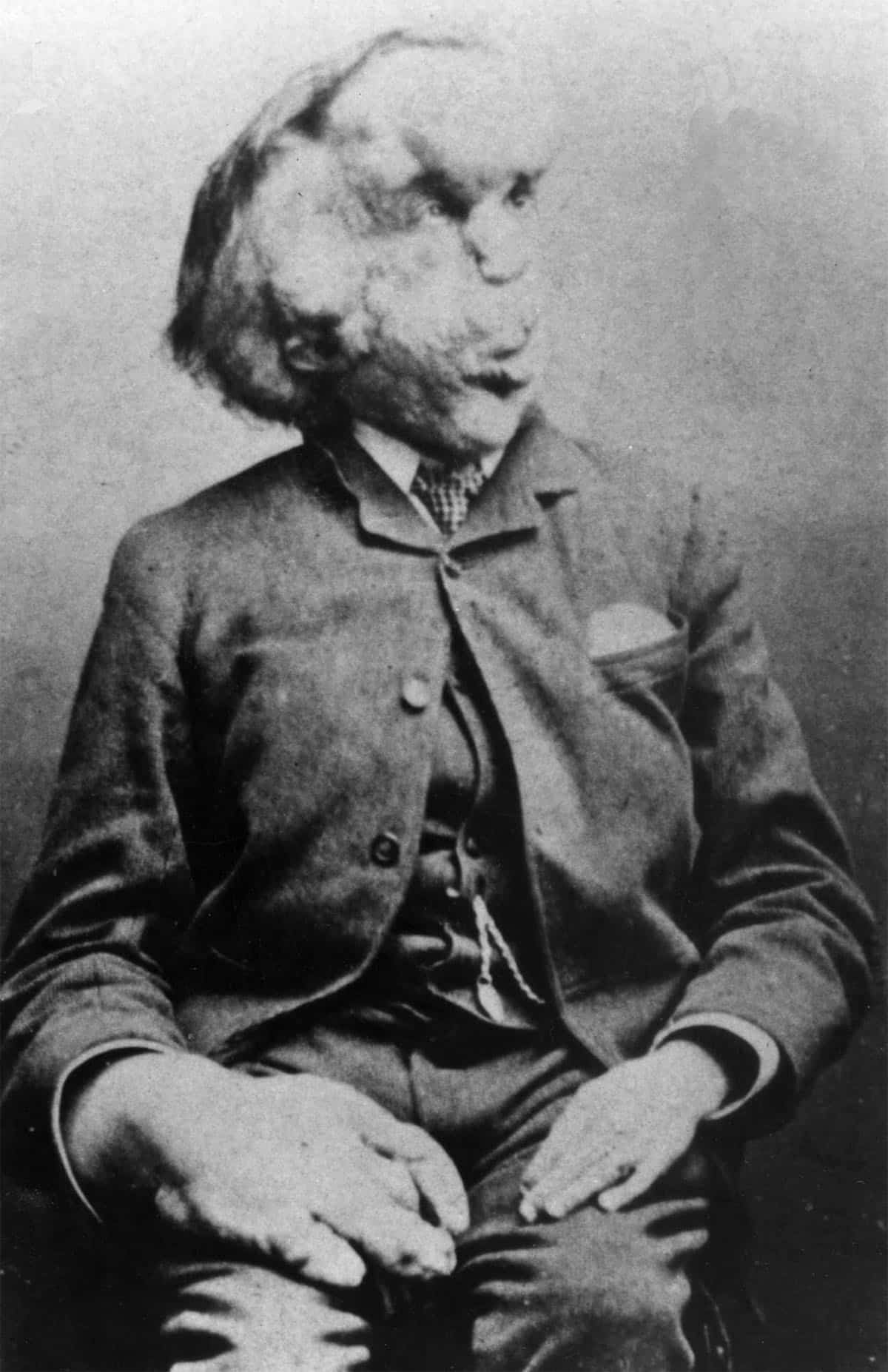 Joseph Merrick, born in 1836 in London, was known worldwide as “The Elephant Man” because of the physical deformities he had.

He was born with Proteus syndrome, a rare condition that caused his bones and other tissues to overgrow.

Organs affected by the condition also grew out of proportion to the body. His head was also very large that he always slept sitting up.

In 1890, he was found dead in his room. Cause of death was believed to be a dislocated neck injury because Merrick had attempted to sleep lying down earlier. 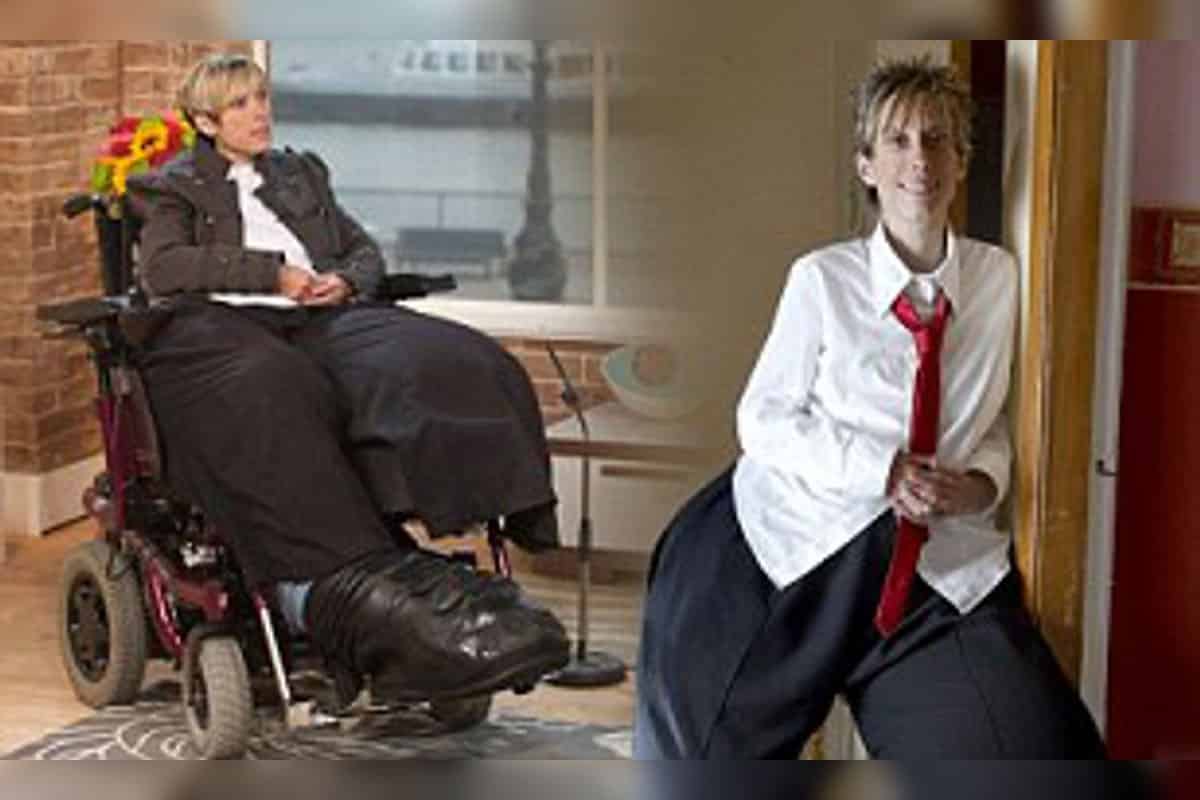 At first many people thought that Mandy Sellars suffered from the same condition as Joseph Merrick did, who had died about 85 years before she was born; the difference was that Sellars’ condition only affected her legs.

Sellars even had one of her legs removed after it had been infected by deep vein thrombosis and MRSA.

Gene sequencing finally revealed that Sellars’ condition was never Proteus syndrome but it was caused by genetic mutation.

She began receiving Rapamycin treatment in 2013 and experienced significant reduction within the first 3 months.

She lost 10 kg from her legs and further 3 kg within the next 3 months. 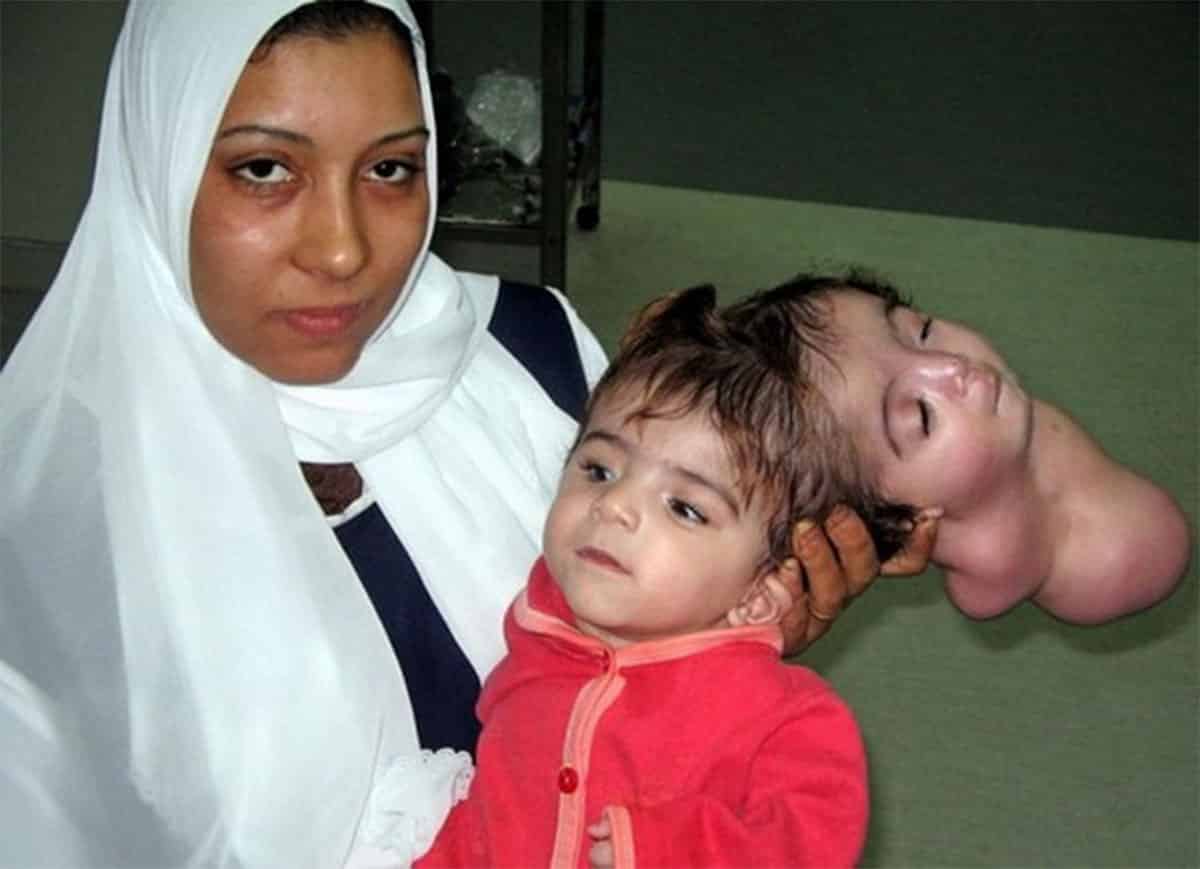 In February 2005, Manar Maged, a 10 months old girl with a parasitic twin attached to his head, underwent a successful surgery in Egypt to remove the deformity.

The condition is known as craniopagus parasiticus, in which a parasitic twin head (with undeveloped body) is attached to the head of the developed twin.

The conjoined (and later removed) twin head could blink and smile. About 14 months after the surgery, Maged also died due to severe infection in her brain. 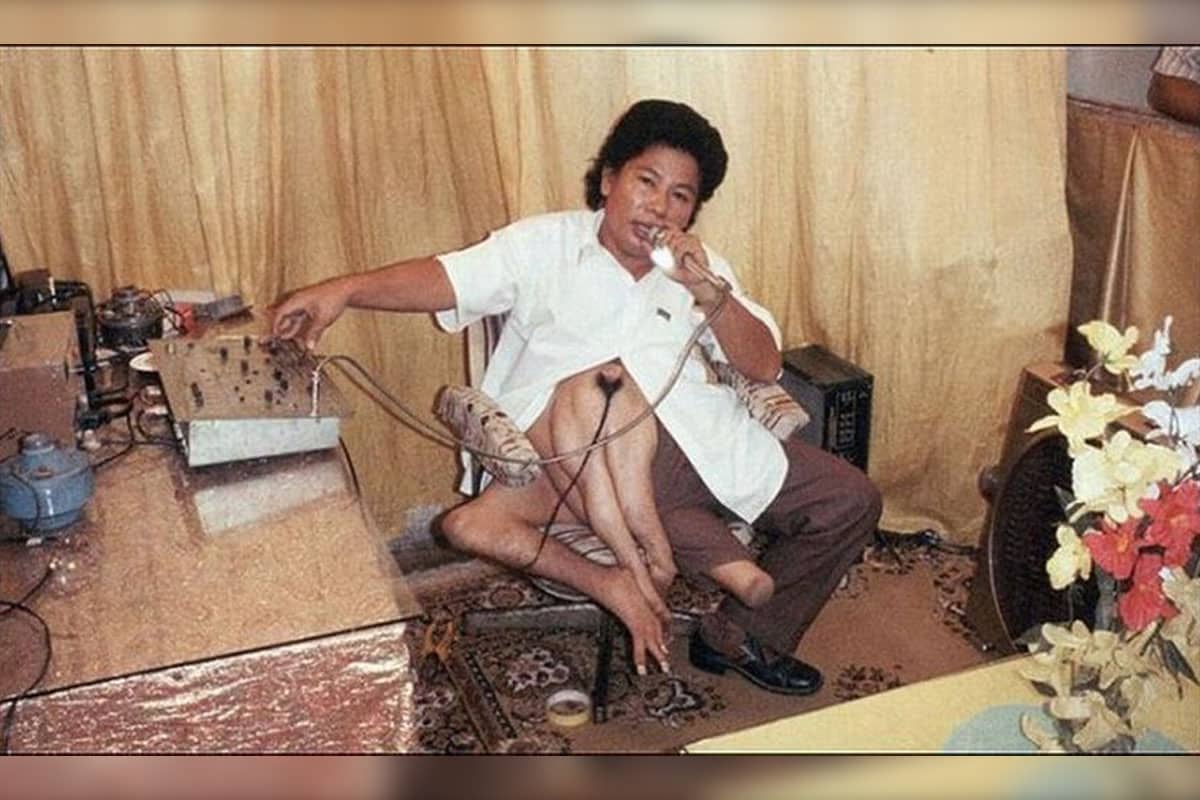 Born in 1953, Rudy Santos from Philippines is now the oldest person with a parasitic twin. The undeveloped twin is attached to his abdomen and pelvis.

The parasitic twin has visible pair of arms and legs, yet it is also known that the undeveloped body actually has a head with ears and hairs as well.

Vicente Gomez, an expert in separation of parasitic twin did an examination of Rudy Santos in 2008 and determined that removal surgery was a viable option.

However, Santos rejected the surgery; he said he has grown too attached to the appendages. 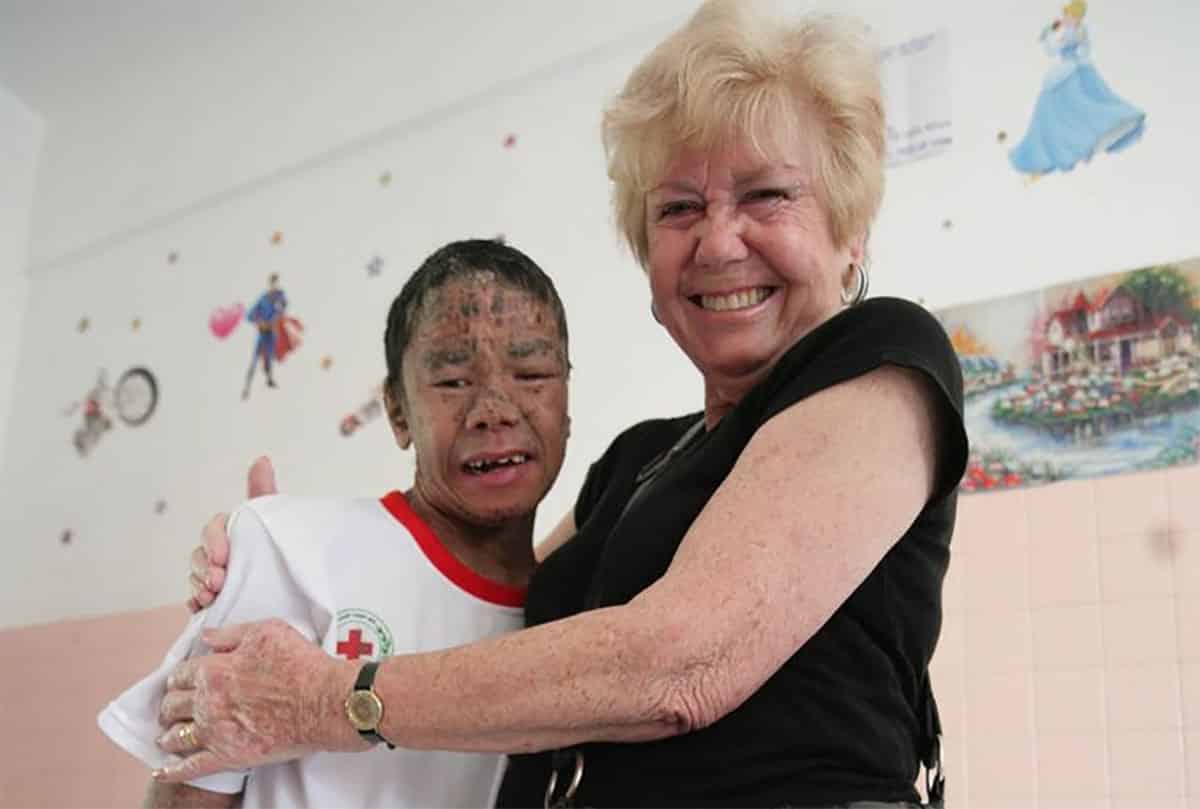 Minh Anh of Vietnam was born with Ichthyosis, a skin disease in which the body accumulates dead skin cells on the surface.

His skin becomes flaky and forms scales that cause his body to quickly overheat. He lives in an orphanage in Vietnam and is often called “Fish” by other children.

At one point, staffs were forced to tie him down because he was prone to violent outburst.

He later befriended a British woman named Brenda who managed to convince the orphanage to untie Minh Anh.