by Factionary 4 months ago5 days ago
017.8Kviews

The USS Indianapolis was built by the New York Shipbuilding Corporation in Camden, New Jersey. She launched for the first time in 1931 and was commissioned by the US Navy the following year.

Designed to be a Portland-class heavy cruise, the ship was 186 meters long and had a displacement of 9,950 tons. Her main battery included eight 5-inch antiaircraft guns and nine 8-inch guns.

The Indianapolis had eight boilers generating power to four steam engines, allowing her to cruise at more than 32 knots.

During her first years of service, she operated in both the Pacific and Atlantic Oceans. Then Word War II happened.

Almost immediately after the United States became directly involved in World War II, the Indianapolis played her role as part of the aircraft-carrier task force in the Pacific Theatre.

On July 30, 1945, her dutiful service ended as she sank to the bottom of the ocean after being struck by a Japanese submarine.

Hundreds of crews who survived the sinking were stranded in shark-infested waters for days, unnoticed by the US Navy.

The USS Indianapolis participated in the bombardment of Iwo Jima in February 1945.

She sustained damage the following month by a Japanese kamikaze plane off Okinawa Island. After receiving some repairs, she promptly returned to active service.

In late July, the Indianapolis was sent on a high-speed to deliver a precious cargo to a US airbase in the Mariana Islands.

No one on board knew that she was carrying the internal component of atomic bombs, which were ultimately dropped on Hiroshima in just less than two weeks later, sending the Pacific Theatre of WWII to a quick end.

Starting her voyage from San Francisco, the Indianapolis reached Tinian in the Mariana Islands in just ten days.

The precious package was delivered on July 26, intact. She proceeded to Guam and was soon sent to Leyte Gulf in the Philippines on July 30.

She was about halfway to Leyte when the Japanese submarine I-58 hit her with two torpedoes. The attack was effective as the Indianapolis sank in just 12 minutes.

She brought nearly 300 crews down with her, while the remaining 900 floated in the Pacific Ocean. The US Navy was not aware of their location. 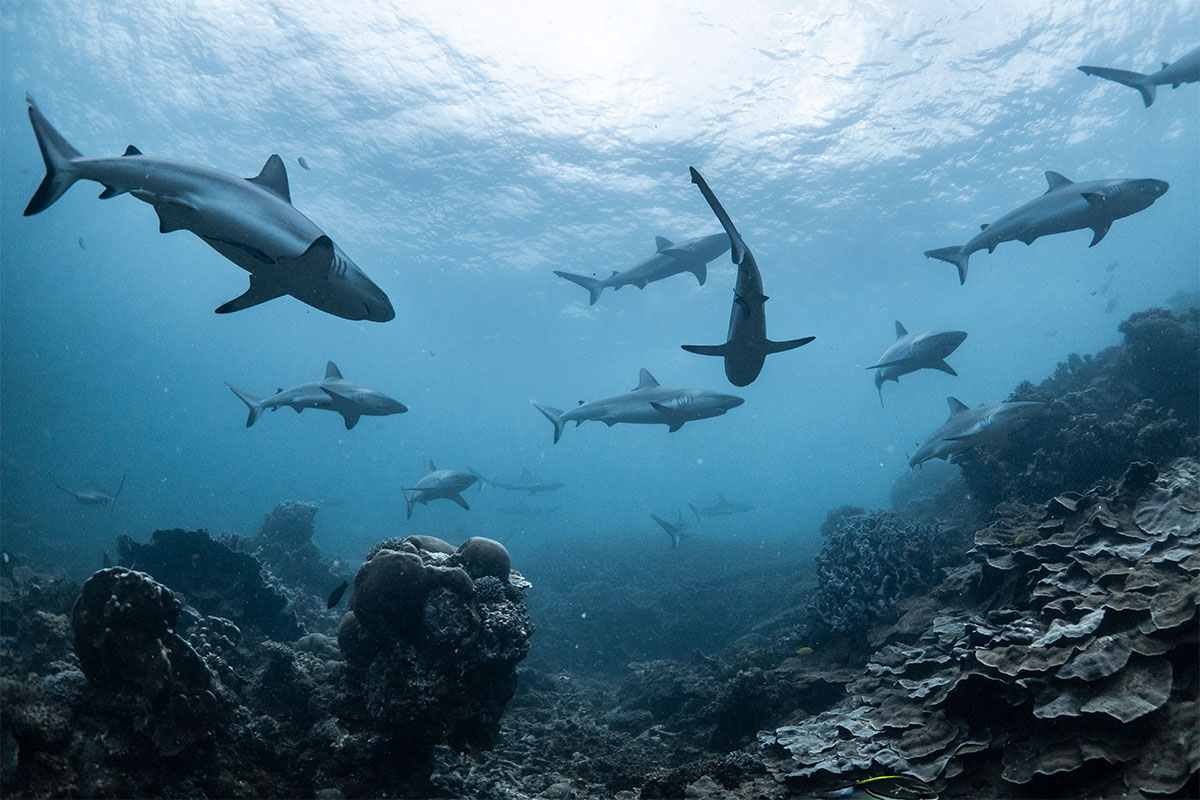 When the incident happened, Indianapolis was carrying nearly 1,200 crews. As many as 900 who survived the sinking were stranded in the middle of the Pacific Ocean with only jackets and a small number of life rafts.

As if their lives were not at circumstances dire enough, they were floating in shark-infested waters.

Since there were only so many life rafts, they decided to prioritize injured crews. Everyone else would stay in the water. Those who didn’t wear life jackets would qualifier for the relative safety on the rafts too. 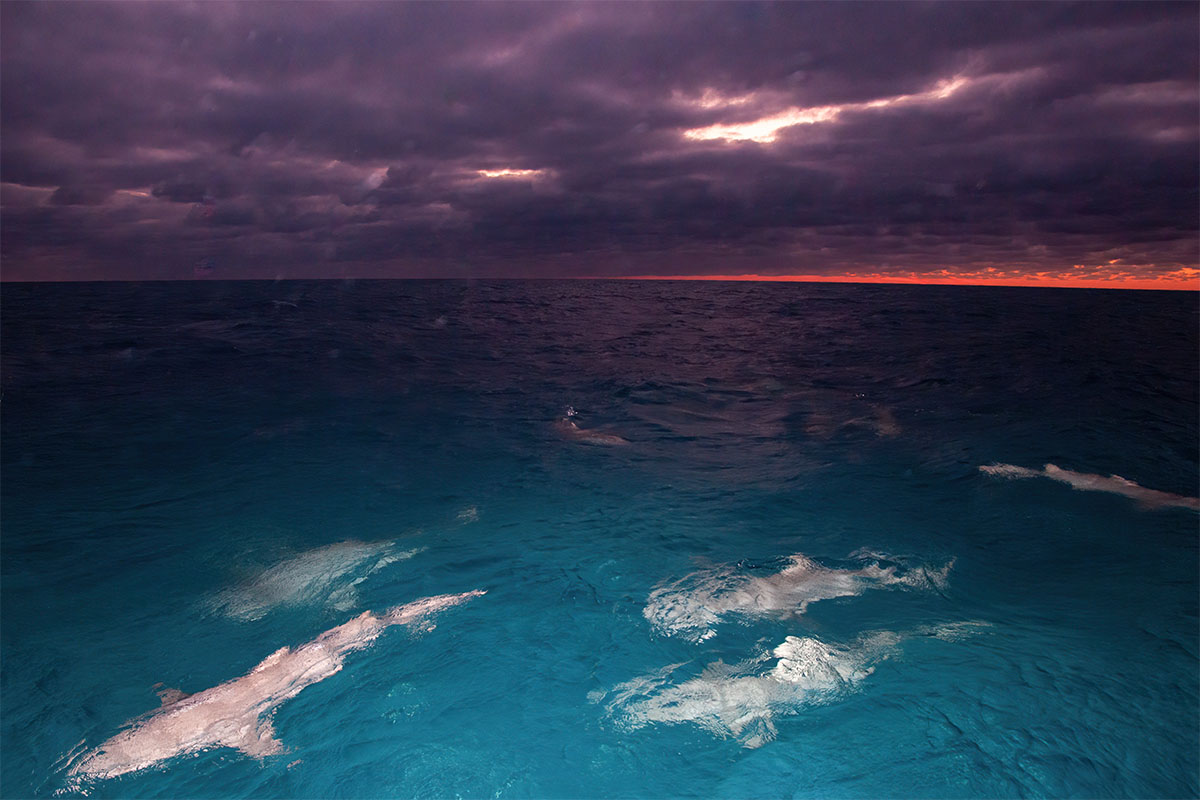 According to Giles McCoy, of the Marine detachment and one of the survivors, the sharks fed on dead bodies at least at first.

He believed the sharks chose easier targets; there were hundreds of corpses floating on water, the sharks didn’t bother attacking the ones who could fight back.

It all changed when at night, an enormous swarm of sharks came across survivors. When a shark approached a group, they would kick and made lots of loud noises to scare the predators away.

Some sharks would single out their victims then the water turned red following a piercing scream.

First-aid kits would have been helpful. However, since the container was not watertight, they were useless due to water damage.

Floating food containers should have been a blessing too, but it was once again a terrible assumption. Cans of Spam could be opened daily and divided equally to sustain living survivors.

The problem was that each time a man opened a can of Spam, the smell of the cooked pork drew the attention of sharks.

Malted milk tablets, biscuits, and no freshwater were the only options. Survivors had to endure the ordeal for nearly five days.

A passing US naval aircraft spotted them by accident on August 2 during a routine patrol flight.

It was a PV-1 Ventura Bomber piloted by Lt. Wilbur C. Gwinn, who immediately alerted his base about the surviving crews. Help was on the way.

After almost five days of terrible thirst, starvation, suffering from open wounds, and constant shark attacks, the men of the USS Indianapolis were rescued at last.

Their number had shrunk from around 900 to 316 survivors; most were on the brink of death. By the time rescued survivors recovered from their ordeal, the war had ended.

The US government announced the loss of Indianapolis on August 15, more than two weeks after the tragedy. Many now believe the delayed announcement was made on purpose.

By promoting it on the same day that President Truman delivered the news of Japanese surrender, the government hoped the story of USS Indianapolis would be overshadowed.

Victory over the Imperial Japanese Army in the Pacific Theater of World War II changed history. To say that it was monumental would be an understatement. Still, the USS Indianapolis deserved a little bit more respect than that.

The commanding officer of the USS Indianapolis, Captain Charles B. McVay III, was among the survivor.

He was court-martialed, and in February 1946, found guilty of negligence for having failed to steer the ship in a zigzag course to evade the attack that had sunken his boat.

The court recommended clemency. He committed suicide in 1968, almost 20 years after his retirement.

Many survivors believed the US Navy had scapegoated their captain. Poor visibility during the attack made zigzagging inadvisable. Captain McVay testified at the court-martial that even zigzag course would not have thwarted the attack.

It later came to light the US Navy had deciphered secret messaging code used by their Japanese counterpart.

They knew all along that Japanese submarines were operating in the area where the Indianapolis sank. Still, they chose not to warn her to avoid revealing the code-breaking success to the enemy.

Moments after the attack, the US Navy also decoded a message from I-58 that it had sunk an American battleship.

The news was ignored. However, it was not until 2000 that Captain McVay was exonerated for the loss of the USS Indianapolis and cleared of all wrongdoings.

1 /10 Discovery Of The USS Indianapolis Wreckage

After decades of searching, the wreckage of the USS Indianapolis was found on August 19, 2017.

A team of researchers, led by Paul Allen, co-founder of Microsoft, located the ship (or what’s left of it) 5,500 meters below the Philippine Sea.

A breakthrough in the search happened in 2016 when Richard Hulver, a naval historian, discovered records showing the ship’s exact location just 11 hours before it sank.

Records suggest that no distress call from Indianapolis was ever received. The site helped direct Paul Allen in the right direction.